As far as I’m concerned, the following scenario confirms my past assertions that the republican President Donald Trump is acting like the poster child of a Russian asset as he resides in the White House. This is just case in point. Despite all the president’s aides advising the president not to contact President Putin to congratulate him in winning a recent election where he couldn’t lose, he did just that.

This report is the result of a leak which has staffers in the White House fuming. The good news is someone risked his/ her job to make this story public.

On March 21, 2018, Carol D. Leonnig, David Nakamura and Josh Dawsey of Washington Post penned the following report, “Trump’s national security advisers warned him not to congratulate Putin. He did it anyway.”

“President Trump did not follow specific warnings from his national security advisers Tuesday when he congratulated Russian President Vladi­mir Putin on his reelection — including a section in his briefing materials in all-capital letters stating “DO NOT CONGRATULATE,” according to officials familiar with the call.” 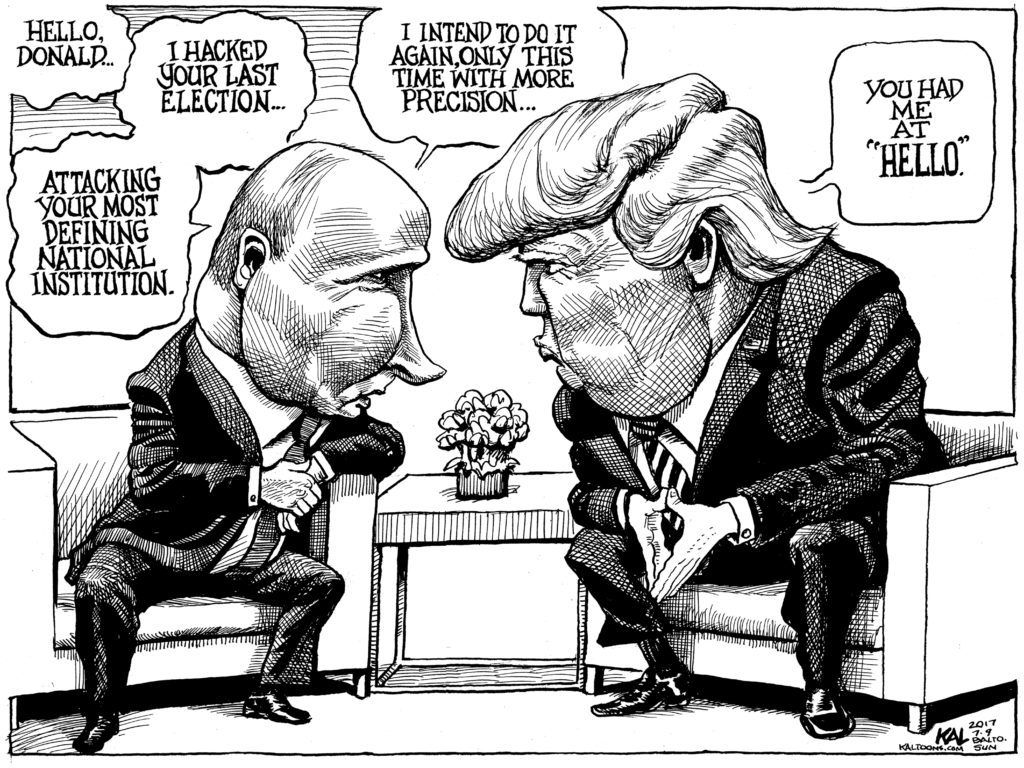 “Trump also chose not to heed talking points from aides instructing him to condemn the recent poisoning of a former Russian spy in Britain with a powerful nerve agent, a case that both the British and U.S. governments have blamed on Moscow.”

“The president’s conversation with Putin, which Trump described as a “very good call,” prompted fresh criticism of his muted tone toward one of the United States’ biggest geopolitical rivals amid the special counsel investigation into Russia’s election interference and the Trump campaign’s contacts with Russian officials.”

“Although the Trump administration has taken a tougher stance toward Russia recently — including new sanctions last week on some entities for election meddling and cyberattacks — the president has declined to forcefully join London in denouncing Moscow for the poisoning of Sergei Skripal and his daughter Yulia in Salisbury, England, this month. They remain critically ill.” 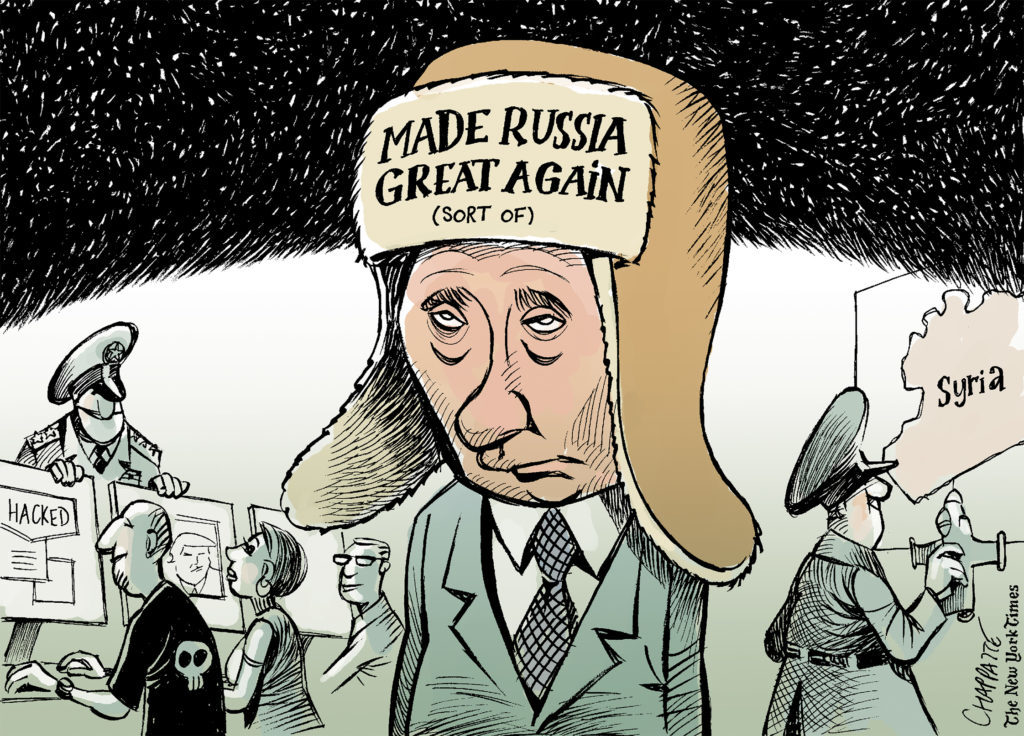 “Trump told reporters that he had offered his well wishes on Putin’s new six-year term during a conversation that covered a range of topics, including arms control and the security situations in Syria and North Korea. White House press secretary Sarah Huckabee Sanders told reporters that Skripal’s case was not discussed. Information on Syria and North Korea was also provided to the president in writing before the call, officials said.”

“We’ll probably be meeting in the not-too-distant future,” Trump said of Putin, though Sanders emphasized that nothing is planned.

“The White House press office declined to comment on the briefing materials given to Trump. Two people familiar with the notecards acknowledged that they included instructions not to congratulate Putin. But a senior White House official emphasized that national security adviser H.R. McMaster did not mention the issue during a telephone briefing with the president, who was in the White House residence ahead of and during his conversation with Putin.” 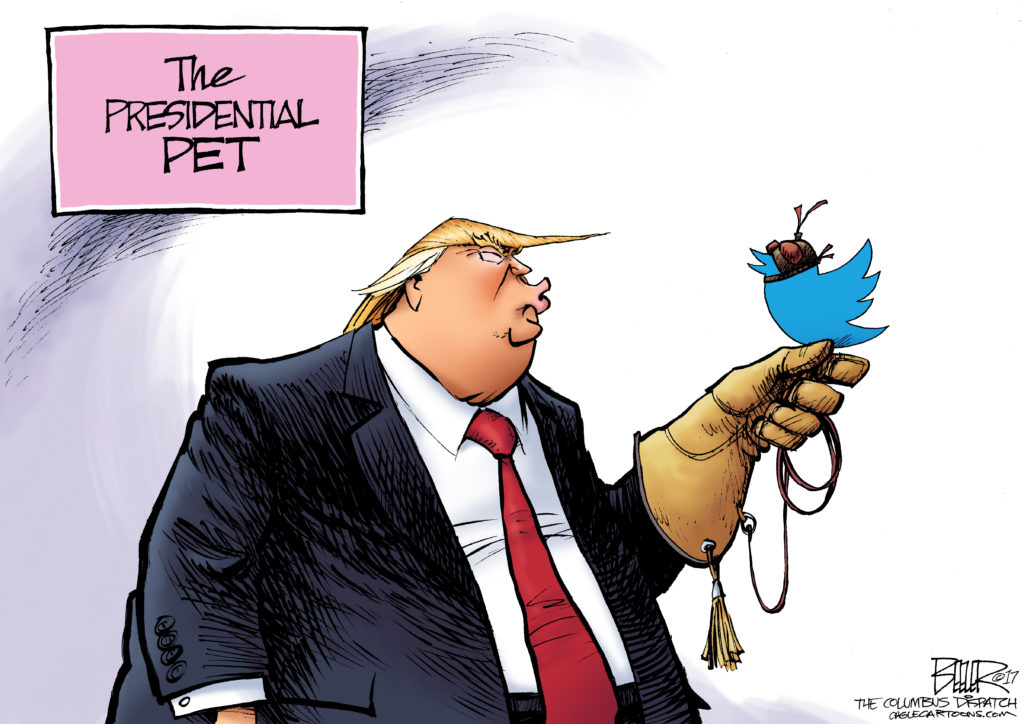 “It was not clear whether Trump read the notes, administration officials said. Trump, who initiated the call, opened it with the congratulations for Putin, one person familiar with the conversation said.

“The president’s tone drew a rebuke from Sen. John McCain (R-Ariz.), chairman of the Senate Armed Services Committee, who wrote on Twitter: “An American president does not lead the Free World by congratulating dictators on winning sham elections. And by doing so with Vladimir Putin, President Trump insulted every Russian citizen who was denied the right to vote in a free and fair election.”

“Putin’s latest consolidation of power came in what foreign policy analysts said was a rigged election in which he got 76 percent of the vote against several minor candidates. ”

“Ahead of Tuesday’s phone call, national security aides provided Trump with several handwritten notecards filled with talking points to guide his conversation, as is customary for calls with foreign leaders, according to the officials with knowledge of the call, who spoke on the condition of anonymity to discuss private conversations.”
“The notecards are similar to the one Trump was photographed clutching during a White House meeting last month with students and parents after the mass shooting at Marjory Stoneman Douglas High School in Parkland, Fla., officials said.”

“Trump’s failure to raise Moscow’s alleged poisoning of the former spy in Britain risked angering officials in London, who are trying to rally Britain’s closest allies to condemn the attack. Russia has denied involvement in the March 4 poisoning, but the attack has badly damaged British-Russian relations, and British Prime Minister Theresa May last week announced the expulsion of 23 Russian diplomats in retaliation.” 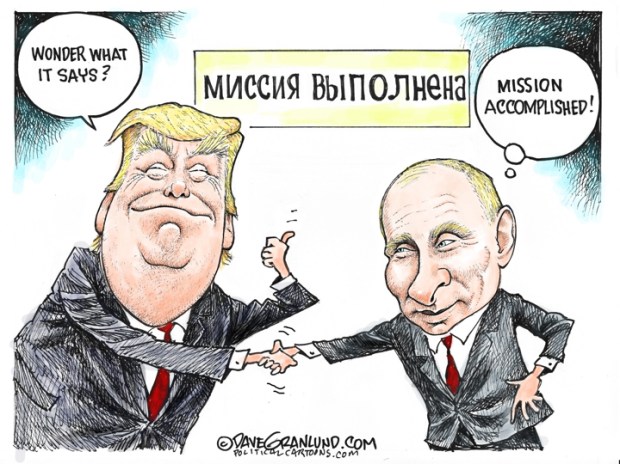 We’ve been very clear in the actions that we’ve taken that we’re going to be tough on Russia, particularly when it comes to areas that we feel where they’ve stepped out of place,” (Spokesperson) Sanders said. “We’ve placed tough sanctions on Russia and a number of other things where we have shown exactly what our position is.”

“She emphasized, however, that Trump is determined to establish a working relationship with Putin to tackle global challenges, including confronting North Korea’s nuclear weapons program.” 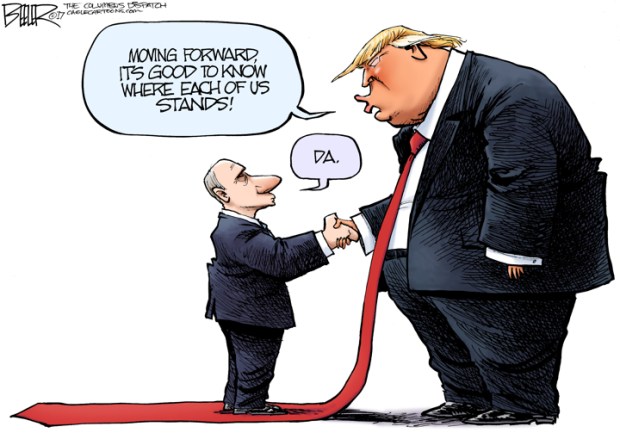 “The president can call whomever he chooses,” McConnell said at his weekly news conference. “When I look at a Russian election, what I see is a lack of credibility in tallying the results. I’m always reminded of the election they used to have in almost every communist country where whoever the dictator was at the moment always got a huge percentage of the vote.”

“Trump has largely refrained from criticizing Putin amid special counsel Robert S. Mueller III’s investigation of the 2016 election meddling; in February, Mueller indicted 13 Russian nationals on conspiracy charges. The president’s tone has at times been at odds with that of his administration, which has taken stronger actions to counter Russian aggression, including Trump’s authorization of new sanctions against Russia and additional support for Ukrainian troops in their fight against Russian-backed forces.” 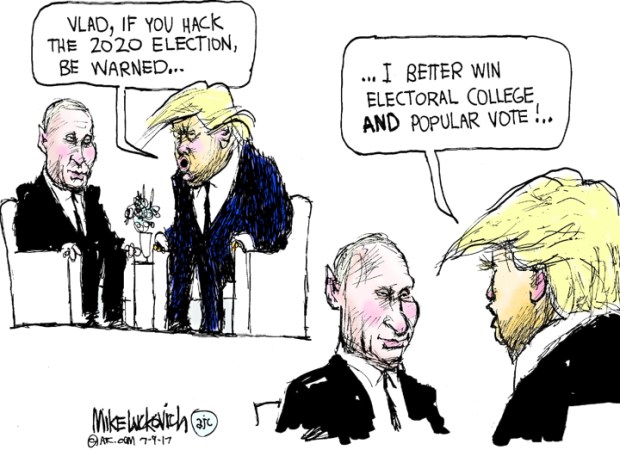 “It’s blatantly obvious that he has just an inexplicable level of support for President Putin,” said Julie Smith, a European security expert who served as deputy national security adviser for Vice President Joe Biden. “You keep thinking it will change as he sees his own administration take action — that this never-ending well of support for Putin will somehow subside. It’s disheartening at a time when our transatlantic partners really need a boost. Europe is looking to us for leadership on Russia in particular, and they’re not getting it.”

Thomas Wright, director of the Center on the United States and Europe at the Brookings Institution, said Trump’s actions were “a sign he wants a pro-Russia foreign policy,” which conflicts with the harder line from his administration.

“Everyone is trying to figure out what does this mean,” Wright said. “Russia hawks say, ‘Pay attention to us, but not to the president or to the tweets.’ But the reality is, his reaction is policy. The fact that there hasn’t been a stronger sanctions response to the poisoning so far is policy.” 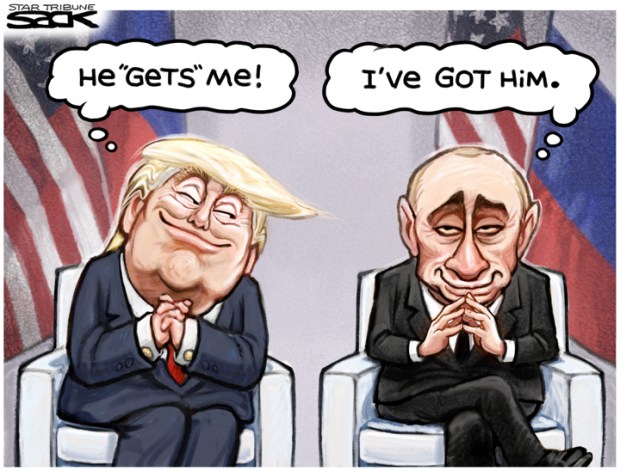 “Trump’s applause of Putin’s victory was in line with other congratulatory calls he has made, including to Turkish President Recep Tayyip Erdogan for winning a much-disputed referendum that increased his already autocratic powers, and to China’s President Xi Jinping for his “extraordinary elevation” after Xi last month engineered the Communist Party’s elimination of presidential term limits.”

“I think it’s great. Maybe we’ll have to give that a shot someday,” Trump said in a closed-door speech to Republican donors at his Mar-a-Lago Club in Florida several weeks ago, a recording of which was obtained by CNN.