aside Alternate Theory On $1.6 Million Dollar Pay-Out By Michael Cohen On Behalf Of GOP Fundraiser

Disclaimer: The following report by NY Magazine is a theory only. As of right now, the hypothesis falls under the heading of “fake news.”

So, why am I blogging on it? The theory makes more sense than what information has been shared with the American public to date about the republican President Donald Trump’s personal attorney Michael Cohen having represented a major republican fund raiser Elliott Broidy in a settlement to hush up his affair with a young lady to the tune of $1.6 million dollars. He has been listed as one of the three clients being represented by Mr. Cohen, as he testified to in a recent court hearing. The other 2 names that he shared are President Trump and Sean Hannity of FOX TV News.

My hesitancy in buying any of this proffer by Mr. Cohen has to do with why a wealthy man like Elliott Broidy would even consider doing business with the likes of Michael Cohen. The other is that I personally am uncomfortable with accepting at face value anything the president and Mr. Cohen volunteer where the story has too many holes, as both have a history of being untruthful.

The theory being presented by NY Magazine has to do with the president himself wanting to cover up another adulterous affair with a playboy model who was possibly impregnated by him.

It is my theory that Elliott Broidy by participating in this con benefited by having kompromat on President Trump. See: Elliott Broidy: A history of bribery and pro-Israel advocacy | USA News/ ‘Al Jazeera

This tidbit is important because the only entities that seem to be able to exert power/ influence over President Trump are those which have kompromat on him like Russia, Stormy Daniels and now, possibly, Israel with UAE.

Reminder of the cast of characters:

1.) Mr. David Dennison is the alias for President Trump.

2.) Keith M. Davidson, Attorney who has purported to represent other ladies who have had dalliances of a sexual nature with President Trump and who have signed a non-disclosure form (NDA).

“On May 2, Rudy Giuliani revealed that the Trump administration has been lying for months about the fact that Donald Trump reimbursed his personal attorney Michael Cohen for the $130,000 he fronted to buy porn star Stormy Daniels’s silence about her affair with Trump. Until then, Trump had been claiming that he didn’t know about any settlement, and that he hadn’t had a sexual liaison with Daniels. (The official White House line continues to be that Daniels is lying about having sex with Trump, but almost no one believes this.) Giuliani has claimed that Trump gave him the okay last week to contradict several months’ worth of denials, by revealing Trump’s payments to Cohen.” 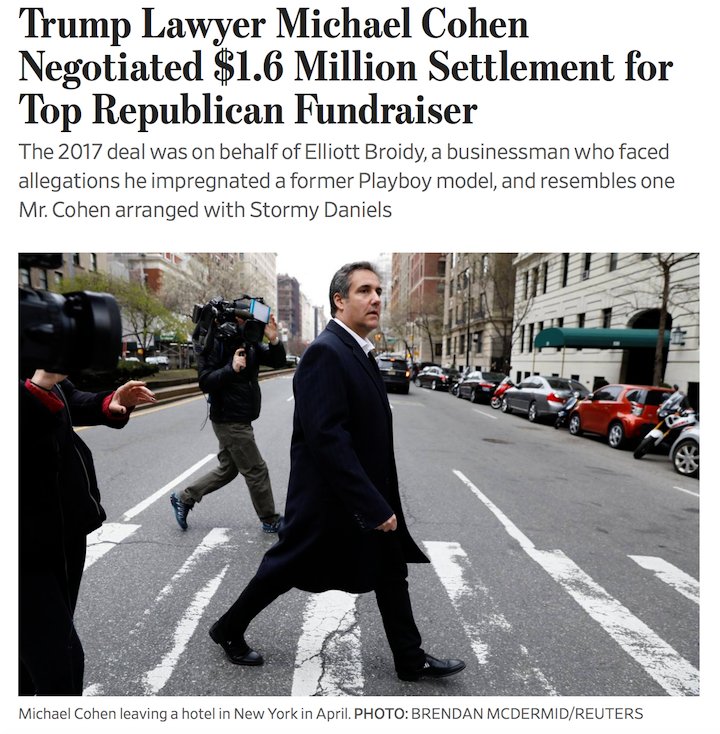 “In journalism this is known as getting out in front of a story. After federal law-enforcement officials raided Cohen’s office on April 9, they surely had documentary evidence of these financial transactions, which meant it was inevitable the truth would eventually come out.”

“We should consider the possibility that the same tactic — i.e., shameless, baldfaced lying — may have played a role in the exposure of yet another Trump-related sex scandal. The Wall Street Journal published a story on April 13 revealing the existence of another nondisclosure agreement involving an affair between an adult entertainer and a client of Cohen’s. The NDA employed the pseudonyms David Dennison and Peggy Peterson — the same names used in the Stormy Daniels NDA — and was otherwise very similar to the Trump-Daniels agreement.”

“According to this newly revealed NDA, Dennison agreed to pay Peterson $1.6 million, in exchange for Peterson’s promise not to reveal the affair or her claim that Dennison had impregnated her. This NDA, like the Trump-Daniels document, was negotiated by attorneys Keith Davidson, on behalf of Peterson, and Michael Cohen, on behalf of Dennison. Payments were also delivered through Essential Consultants LLC, the same LLC created by Cohen to facilitate payments in the Stormy Daniels deal.”

“Whatever source revealed the existence of this NDA to the Journal also disclosed that, according to another document in Cohen’s office, the Dennison in this agreement was not Donald Trump but rather Elliott Broidy, a top Republican fundraiser, while Peterson was Shera Bechard, Playboy’s Miss November 2010. Apparently, Bechard had been Broidy’s mistress until he got her pregnant, at which point she hired Davidson, who contacted Cohen to demand the payment of hush money.”

“By a stroke of good fortune, Cohen already had a sex-scandal-with-an-adult-entertainer-hush-money-NDA template in his hard drive, since he had recently drafted at least one for Donald Trump. Indeed, Cohen didn’t even bother to change the pseudonyms. (That economical use of attorney resources explained away what otherwise could have been a very awkward detail in the narrative.)”

“This is the story that was leaked to the Journal — and to the New York Times, and CNN, which the Journal beat to the punch by publishing it first. It has since been repeated as fact by just about every major media outlet in the country. But there are good reasons to consider whether it might not be yet another audacious lie from Trumpworld.”

“Let me offer an alternative explanation of the affair and the payoff. It is still just a hypothesis, but, I would argue, it fits more comfortably with what we know about the various players than the reported version of events: Donald Trump, not Elliott Broidy, had an affair with Shera Bechard. Bechard hired Keith Davidson, who had negotiated both Playboy playmate Karen McDougal’s deal with the National Enquirer and Stormy Daniels’s NDA with Trump. Davidson called Cohen, and the two of them negotiated a $1.6 million payment to Bechard.”

“At this point Cohen needed to find a funding source. Cohen asserts he took out a home equity loan to come up with a mere $130,000 to pay off Stormy Daniels, so it seems clear he couldn’t have fronted the $1.6 million for the Bechard deal himself. So Cohen reached out to Elliott Broidy, a very rich Republican fundraiser with several pending and highly lucrative business deals with foreign governments: deals that hinged on whether Broidy could convince the U.S. government to take various actions. By stepping up to take responsibility for the affair and to fund the seven-figure settlement, Broidy was ensuring that he could continue to peddle his influence with Trump to governments around the world.”

“Which is to say, it was a cover-up concealing a bribe. Indeed, it turns out that Broidy not only has a history of bribing public officials, but of bribing them in an uncannily similar fashion to the method which I hypothesize he employed in this case.”

“So, according to this hypothesis, when Cohen’s office was raided by federal prosecutors, they found documentation of what was actually a fabricated affair, concocted by Cohen and Davidson to create a justification for funneling Broidy’s money to Bechard, while creating a paper record designed to protect Trump from further exposure.”

“This account — as bizarre as it may seem at first glance — is actually more plausible than the story leaked to the Journal, the NY Times, and CNN.”

“When I laid out the alternative scenario presented in this article to Avenatti, he had this to say: “There are considerable and serious questions as to this alleged settlement. Many things about it simply do not appear to add up or pass the smell test.”

“Note too that this alternative account presents a narrative in which the behavior of all of the primary parties in this matter — Trump, Cohen, Broidy, and Bechard — is fundamentally consistent with their well-documented personal histories, unlike the story reported by the media.”

“David Dennison slept with a Playboy playmate, impregnated her, and then had Cohen negotiate a hush-money deal. Trump has a well-documented history of having unprotected sex with women in the adult-entertainment industry, and then subsequently buying their silence via proxies. Trump also has a history of being obsessed specifically with Playboy playmates. Trump had a long-standing close friendship with Hugh Hefner, and often visited the Playboy mansion, to which he brought contestants from his television show The Apprentice. One such contestant noted:”

“Toward the end of the evening, I found myself in a small circle, conversing with Trump, Hefner, and another contestant. With a wry smile, Trump looked at Hefner and said, ‘It’s hard for me to tell which of these girls are yours and which ones are mine.’

“Bechard was at one time Hefner’s girlfriend, while Trump and Hefner’s friendship mysteriously came to an end in 2016.”

“In November of 2016, it was revealed that McDougal, another Playboy model, had been paid $150,000 to sell her story of an affair with Trump to the National Enquirer, so that the tabloid, whose publisher is a major Trump supporter, could kill the story rather than publish it. McDougal was represented in this transaction by none other than Keith Davidson. (Davidson has since been fired by McDougal, Daniels, and Bechard, as all 3 women have apparently come to the all too plausible conclusion that Davidson was actually working with Michael Cohen to protect Trump, rather than independently representing their interests, as he was legally required to do after he accepted them as clients.)”

While having sex with Playboy playmates might be a common enough fantasy among certain older married men, history suggests that the combination of reckless narcissism and personal shamelessness necessary to actually pursue it and then pay the various costs associated with fulfilling it is rarer. How many sex scandals involving Playboy playmates and men not named Donald Trump can you recall? “Broidy’s behavior following the raid is inexplicable. The current assumption is that Broidy knew that his payments to Bechard (through the LLC) would eventually become public, given that they were now in the possession of the Feds. But in fact, it was far from certain that they would. Cohen’s lawyers and Trump’s lawyers were fighting to keep Cohen’s attorney-client communications confidential, and it is quite possible that Broidy’s payments would never come to light. And even if they did, he could surely deny to the press that they were his. Broidy claims to have paid $1.6 million to keep his affair with Bechard quiet. Why throw away that entire investment at the first sign that this secret might eventually be exposed? By reacting in the manner he did, Broidy ensured that what was still at the time only a worst-case scenario became an immediate certainty, as opposed to remaining a down-the-line possibility.”

“If this theory is correct, the press bears some of the blame for allowing a corrupt lie to enter the public record as news. At the bottom of this whole tangled situation, there are 2 un-deniable facts: Trump has a habit of having sex with women exactly like Bechard, and then paying them off to stay silent, and Broidy is a man who pays large sums of money, legally and illegally, to influence powerful politicians. That convergence should have set off alarm bells in the minds of journalists when someone decided, immediately after Cohen’s office was raided, to reveal the existence of an NDA between Broidy and Bechard.”

“But what if Broidy was actually faced with the choice of either falsely confessing to impregnating Bechard or, in the alternative, candidly confessing to having paid a seven-figure bribe to the president of the United States? That would certainly explain his otherwise remarkable willingness to instantly confess to a reporter the very secret he had supposedly paid so much money to keep out of the public eye.”