We all knew this was coming. When the GOP members in the US Congress passed their highly coveted tax cuts bill in December 2017 with a huge price tag of adding $1.5 trillion dollars to the US deficit over 10 years, but they did it by sabotaging the ACA/ Affordable Care Act/ Obamacare. The republicans needed even more monies to pay for 2017 GOP donor class tax cuts bill to where they eliminated the mandate requirement from Obamacare. The mandate requirement insured that more healthy young peoples were obligated to purchase health insurance by charging them a fine if they opted out of the program. This helped spread the risk for the insurance companies which made the premiums less expensive.

When the GOP decided to do away with this individual mandate, it was inevitable that the insurance premiums would sky rocket. This fact has recently been verified by a non partisan report published by the Congressional Budget Office (CBO). These increased premium bills will be delivered just in time when voters will be preparing to vote in the November 2018 elections and this is while these GOP congressional representatives have been figuring out that their TAX CUTS BILL IS A DUD.

“The nonpartisan Congressional Budget Office has spoken: Americans are about to see major spikes in their health insurance premiums. And the Republican Party is squarely to blame for it.”

“Republicans couldn’t manage to fully repeal Obamacare, so instead they chipped away at the law’s foundation. And now the Congressional Budget Office has confirmed that Americans are about to pay the very real price.”

According to the CBO’s analysis, health insurance premiums will rise by double-digit percentages in 2019.

“Insurers are expected “to raise premiums for benchmark plans offered through the marketplaces in 2019 by an average of roughly 15 percent over the premiums charged in 2018,” the report notes.”

“In addition, “premiums for non-group health insurance will be about 10 percent higher in 2019.”

“What does the CBO say is largely behind these spikes?”

“Well, they likely wouldn’t happen “if the individual mandate penalty remained in place and was enforced.”

“That would be the individual mandate that Trump and the Republicans succeeded in doing away with by cramming the repeal into their tax scam bill in December 2017.”

“That sabotage will also lead to millions of Americans losing their health insurance entirely. “The number of uninsured people is projected to rise by 3 million in 2019, mainly because of the elimination of the penalty associated with the individual mandate and the higher premiums resulting from that change,” the CBO notes.”

“That number rises by another 3 million over the following two years, on net, as more people adjust to the fact that they no longer face the mandate penalty,” the report warns.” 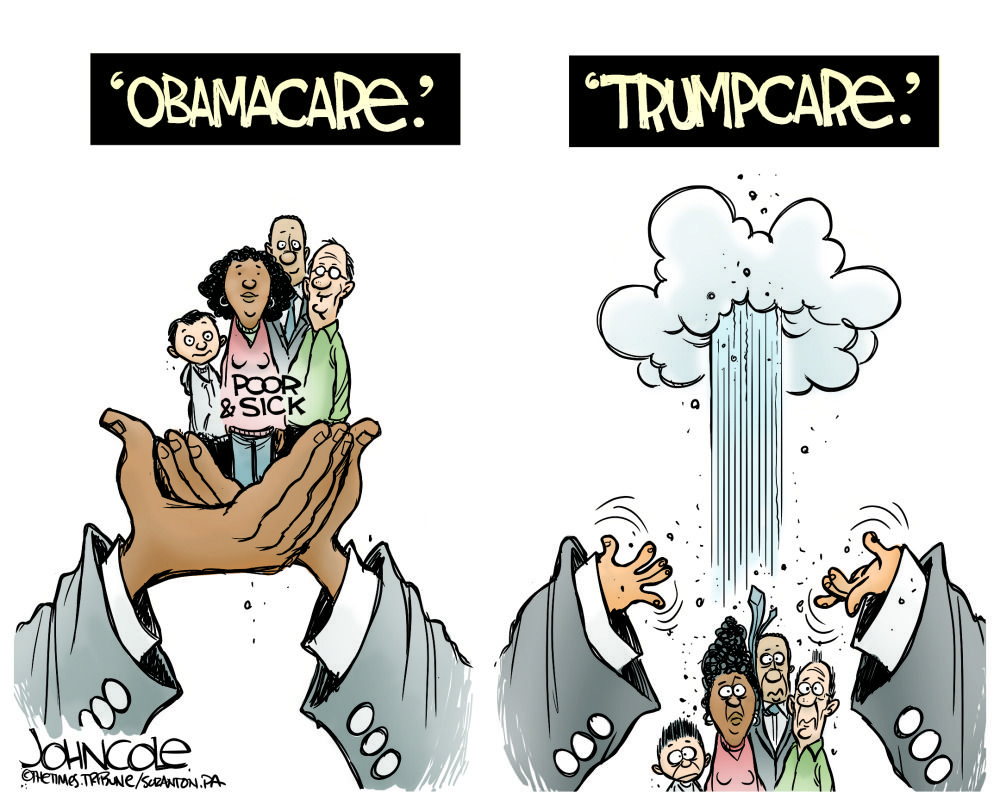 “Despite Republican attempts to deride and demolish it, Obamacare only grew in popularity over the years, as more and more people were finally able to obtain health insurance and access care. The individual mandate was integral to making the overarching system function. It ensured that healthy people would be on the rolls to balance out those with chronic illnesses who have costly health care needs.”

“Doing away with the mandate and the associated penalties means that young, generally healthy people may choose to forgo insurance because they don’t want to pay for it. And thus insurers are taking in fewer premiums while paying out a lot in claims for those who are not so fortunate.”

“And it is those people who will either have to give up their insurance, or break the bank trying to pay for their rising premiums and their medical care.”

“Republicans have mendaciously claimed that anyone, including cancer patients, can simply go to the emergency room for all of their medical needs. And House Speaker Paul Ryan insisted all alongthat the only people who might lose their coverage due to his party’s attacks on Obamacare are those who don’t care about keeping it.”

“Certainly, some of those younger and healthier people may make the choice to go without, now that they’re free from the penalty.”

“But others in far more dire circumstances will not lose insurance by their own volition. They simply won’t be able to afford to pay for it, thanks to the GOP’s cruel efforts.”