We who keep up with the news are aware of the fact that the republican President Donald Trump’s personal attorney/ fixer/ consigiliere Michael Cohen had all his places of work raided by the FBI on the 9th of April 2018. The attorneys for Michael Cohen had sought to keep a lot of this evidence from being able to be used by the FBI with the claim that much of it was protected by the “attorney client” privilege. The US attorneys argued that Mr. Cohen had not been acting as an attorney for years and that little of what was collected would qualify as material that falls under the privilege of attorney-client exception where the FBI could not use any of it to build its case.

On the 30th of May 2018, the Southern District US Court of NY awarded over a million pieces of evidence to the US prosecutors but kept back only about 256 pieces, There are still other documents/ material that a special master is reviewing to ferret out whatever could fall under the client-attorney exception. But what was also revealed at that court hearing, is that the FBI is in possession of data that had been shredded that its lab is working to piece back together again. Collected trash will not be protected by client-attorney privilege. In addition, the FBI has access to lots of audio tapes where Michael Cohen recorded his conversations with others.

This was NOT a good news day for the president.

I am hoping that all this data collected by the FBI will shed light on 2 cases where Michael Cohen had involvement, in addition to whatever other criminal activities he may have been a participant, which may include “pay for play” schemes with foreign countries.

The first is the case of a young lady who claims she was raped by President Trump when she was 13 years old at a Jeffrey Epstein party. She did try to bring a law suit but dropped it with the claim that her life had been threatened.

See: What Happened To The Woman Who Accused The President of Rape …Gronda Morin

It turns out that Ms. Bechard had become pregnant followed up by an abortion. The need for a cover up has to do with the president not wanting this information to be shared with his base consisting of about 35% of Evangelical Christians. The Israeli advocate and lobbyist for UAE and Saudi Arabia against Qatar, Elliott Broidy and  the president’s personal attorney Michael Cohen had both been working together as deputy RNC fund raisers.

He has been saying that this scandal was leaked to the Wall Street Journal four days after Michael Cohen’s places of work were raided by FBI, from data that Qatar had hacked from his computers. And I believe in the tooth fairy before I’d buy this tale as reported by some media outlets.

See: More Evidence That Broidy Was Covering for Trump in Affair – NYMag

On May 22, 2018, Kevin Drum of Mother Jones penned the following report, “Who Did Playboy Model Shera Bechard Really Have an Affair With?”

“Today the AP tells the long, sad story of Elliott Broidy and George Nader, the former once convicted of bribery-by-another-name and the latter once convicted of pedophilia. Anyway, they had a grand plan to make tons of money from the Trump presidency, and the AP story includes this sad and all-too-normal anecdote:”

“Nader wanted more: He wanted a photo of himself with the president — a big request for a convicted pedophile.”

“Broidy was co-hosting a fundraiser for Trump and the Republican National Committee in Dallas on Oct. 25. The Secret Service had said Nader wouldn’t be allowed to meet the president. It was not clear if the objections were related to his convictions for sexually abusing children….There was another issue. RNC officials had decreed there would be no photos with the president without payment. Broidy suggested that Nader meet the suggested threshold with a donation between $100,000 and $250,000.”

“It’s unclear exactly how the two issues were resolved. Records from the Federal Election Commission show no donations from either George Nader or “George Vader,” but on Nov. 30, Broidy gave $189,000 to the RNC — more than he had given to the RNC in over two decades of Republican fundraising.”

“The result: a picture of Nader and Trump grinning in front of the American flag.”

“Frankly, I doubt that being a convicted pedophile is a big deal in the Trump White House, as  long as the money showed up.”

“In any case, this is not what the story is about. It’s about Broidy, the connected Republican insider, and Nader, the connected Middle East guy, teaming up to wage a lobbying war against Qatar in hopes of eventually wrangling huge consulting contracts from Saudi Arabia and the UAE, who both detested Qatar. Things seemed to be going well for a while, especially after the Saudis blockaded Qatar, but then sort of fell apart when Nader was detained earlier this year at Dulles airport as he was transiting through the United States. On the bright side, Broidy ended up with a $600 million contract with the UAE, so it wasn’t all for nothing. If you want to know more, read the whole story for all the twists and turns.” 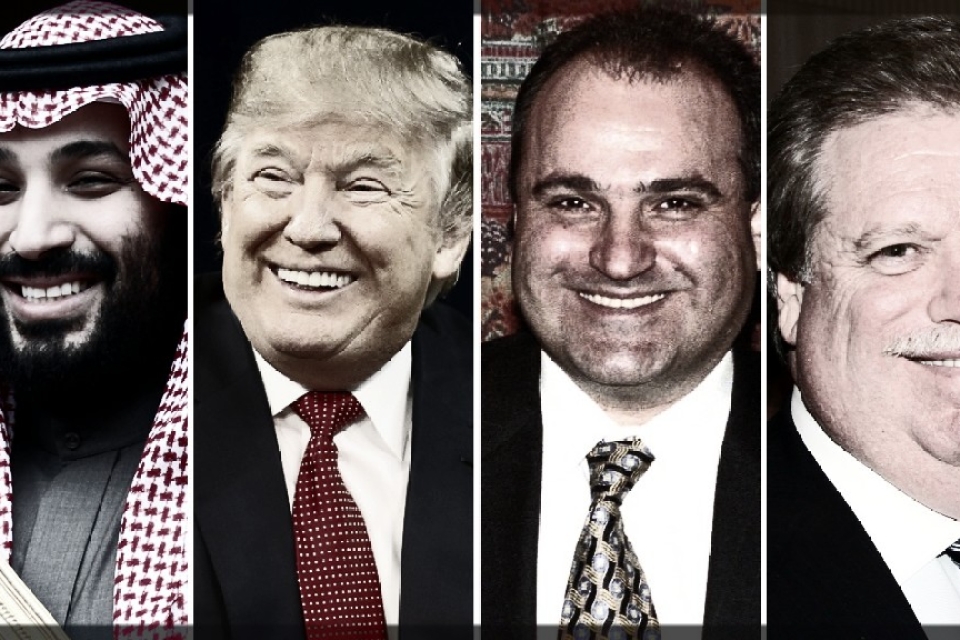 “But it’s hard to pretend not to notice the elephant that never gets mentioned. You may recall that a few weeks ago a judge ordered Trump lawyer/fixer Michael Cohen to reveal all his clients. It turned out he had only three: Donald Trump, Sean Hannity, and … Elliott Broidy. What’s more, he only represented Broidy on one thing: a hush money payment to a Playboy model he had an affair with, some of which was used to pay for an abortion. When that was revealed, Broidy immediately confessed in a surprisingly workmanlike statement and that was that.”

“The whole thing seemed odd, leading Paul Campos to make the case that it was actually Donald Trump who had the affair, with Broidy taking the fall for him. Campos made a decent case, but it was purely speculative and quickly dropped out of sight.”

“However, after reading this AP story it sure seems a helluva lot more likely that Campos was right. It always seemed odd that Broidy had paid Shera Bechard $1.6 million for her silence, considering that an affair with a guy like Broidy was hardly front-page news. However, an affair with Trump would be front-page news, and this was right in the middle of Broidy’s big campaign to get Trump to help him out with the Qatar business. What better way to ingratiate yourself with Trump than to offer to cover up for him? According to the Wall Street Journal, the hush money was paid in “late 2017,” exactly the same time that Broidy made his donation to the RNC in order to get Nader his picture with Trump.”

“This helps to resolve the biggest problem with Campos’s theory: a cover-up like this never seemed like the kind of favor even a close friend was likely to help with. Not only did it cost Broidy $1.6 million, but he had to take the chance that the “affair” would become public and he’d end up taking the rap for having an affair and paying for an abortion. Even your best buddy wouldn’t do something like that for you.”

“But by last November Broidy could practically smell his deals finally coming together. There was the $600 million deal with the UAE plus another deal worth $1 billion that he was pitching to Saudi Arabia. If he thought that taking a fall for Trump could be the final brick that would bring this all together, why wouldn’t he do it? The money was chicken feed by comparison, and maybe he told his wife all about it and she didn’t care. The whole thing finally makes sense.”

“Anyway, you can count me a believer in Campos’s theory. If I had to guess, I’d say that Cohen, as usual, got the job of dealing with Bechard’s demands. But he didn’t want the money to come from Trump, even under a phony name, now that Robert Mueller was scouring every inch of Trump’s business. Somehow this reached Broidy’s ears—he and Cohen were both deputy finance chairs of the RNC at the time—and he offered to help. Cohen immediately took him up on it, and of course Trump knew all about it.”