We have all figured out pretty much who comprise the republican President Donald Trump’ base of voters. When I talk about Trump’s supporters, I am describing those who will stand by him through thick and thin, no matter what he does.

It is my opinion only, that the president’s base in general consists of Evangelicals; anti-immigration voters; racist group members; 2nd amendment gun owners who are hard-line members of the NRA; business community and wealthy voters who wanted their tax cuts and a rolling back of government regulations.

As per a 2018 Immigration Forum report, Polling Update: Public Attitudes on Immigration and Trump, “A poll by Politico and Harvard University conducted in December 2016 asked its nationwide sample of adults how serious a problem they thought it was that there were “currently millions of unauthorized immigrants living in the U.S.” For Trump voters, the presence of undocumented immigrants was a big deal — 90 percent of them thought it was a “very serious problem” or a “somewhat serious problem.”

On February 16, 2018, John Dean for Verdict Justia penned the following report, “Trump’s Base: Broadly Speaking, Who Are They?”

“As best I can determine from the available material, and noted in the prior column, the Trump base has shrunk down to about 24 percent of those who voted for him or have spoken approvingly of him to pollsters. As professional Republican pollster Kristen Anderson reported: “It is around one in four [of people polled] who like his tweeting, like the insults,” which seems something of an index to Trump’s mind and actions. This core group appears to be the base on which Trump’s approval ratings are based, as well, and those numbers have been historically low from the outset of his presidency, and they have been trending downward. According to the Gallup weekly polls, Trump’s job approval started at around 45 percent, but during his first year in office, it was mostly below 40 percent. As a poll-watcher, I also noticed the most recent Washington Post-ABC News polls show that only 11 percent of all Americans think his tweeting is helpful, with only 21 percent of Republicans approve of his tweeting (more evidence of his shrinking base).” 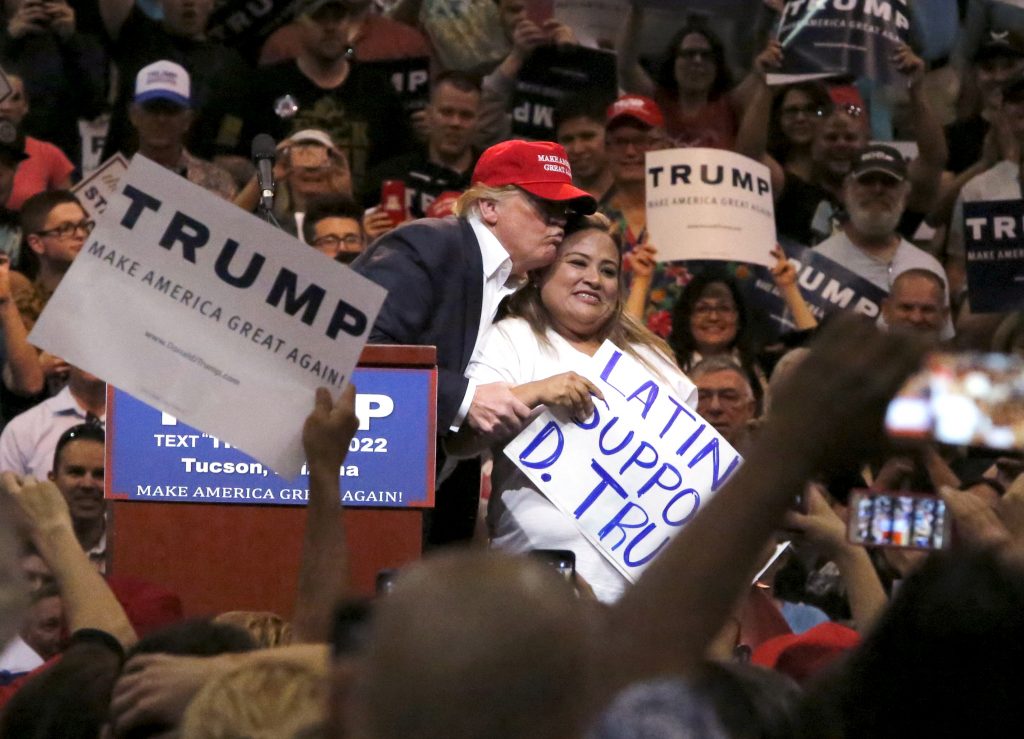 “Trump’s base obviously resides within the collection of voters who supported him at the polls in November 2016. According to a Boston Globe (Nov. 9, 2016) exit poll demographics of the 2016 presidential vote reveal the following (which I have abbreviated for this column):”

“Before the 2016 general election, much of the polling of potential Trump voters focused on low-earning and little-educated, white, working-class men, suggesting they were his core supporters. But that early polling has proved less than accurate based on the information in the general election exit polling. For example, when the exit poll numbers are further broken down, they show that voters with income over $50,000 (also reported as $50 to $100,000) with Trump winning this bracket 50 percent to Clinton’s 46 percent and he also won the over $100,000 bracket 48 percent to Clinton’s 47 percent. While only 27 percent of the 2016 voters considered their financial situation worse on Election Day 2016 than 2012, Trump overwhelming carried those voters’ 78 percent to Clinton’s 19 percent. In short, it does not appear that financial distress, fear of the future, or immigrants taking their jobs is a common factor uniting Trump’s base.”

“But it should be noted the 2016 exit poll demographics do suggest that given his 12-point margin over Clinton with men, his base is predominately male.”

Link to report: Trump’s Base: Broadly Speaking, Who Are They?

I selected the above video of an interview between President Trump and the FOX business news commentator Maria Bartiromo. For me, Ms. Bartiromo is the perfect example of the businessperson who backs President Trump.

On July 1, 2018, Nicole Belle of Crooks and Liars penned the following article, “Donald Trump To The Left: ‘Better Take It Easy’

“There isn’t much more vomit-inducing than the slavishly starry-eyed devotional that passes for an interview of Donald Trump by Maria “Money Honey” Bartiromo on Sunday Morning Futures. I don’t think Kim Jong Un or Vladimir Putin could expect a better propaganda push for their most excellent leadership.”

“But Bartiromo is shocked…shocked, I tell you!…that people could have problems with Donald Trump, especially when the economy is doing so well. (Psst. What was that about the economy and jobs?). The vitriol! The “Trump Syndrome”! I presume she means “Trump Derangement Syndrome”–which would imply an irrational response, but I don’t see anything irrational about opposing racism, lying, corruption, misogyny, lying, collusion with a hostile foreign power, lying, white nationalism or lying. Maybe it’s just that our standards are simply more stringent than Bartiromo’s.”

“But Trump’s response is oddly threatening: “I think some of the things said [by critics] are terrible. And you know, our people are so incredible. Do you know, there’s probably never been a base in the history of politics in this country like my base. I hope the other side realizes that they better just take it easy. They better just take it easy.”

“For someone who has pulled myself out of a physically abusive relationship, this is eerily familiar: “Don’t make me hurt you. Behave or you’re going to get it.”

“So let me just say to that advice: Sit down, you haven’t seen anything yet.”

“Your base may love you, but they’re not the majority of Americans and we will not allow them to turn this country into the 21st century version of the Weimar Republic without a fight.”

Link to article: Donald Trump To The Left: ‘Better Take It Easy’