The Connection Between GOP Rep. Rohrabacher, Maria Butina And The NRA

The consensus is that the US Congress representative referred to in the 7/13/18 US Department of Justice’s indictments against 12 Russian GRU operatives for having interfered with the 2016 US presidential election’s system in order to effect the outcome in favor of republican President Donald Trump, is none other than the Californian Representative Dana Rohrabacher.

Remember that over a year ago, there was this news item about a June 2016 off the cuff recorded conversation between the US House Speaker Paul Ryan and another House leader Kevin McCarthy with others present, where Mr. McCarthy BLURTED OUT LOUD that he truly believed that the republicans President Donald Trump and the Californian US House Representative Dana Rohrabacher were being paid off by Russia. All who heard this conversation agreed to keep quiet about it.

The Washington Post reporter Adam Entous who had reported on the above story, was a guest on the MSNBC TV show, Hardball on 5/17/17 where he explained that he had contacted both Mr. McCarthy and Mr. Ryan to request their comments regarding the this story. Both denied that this interaction had ever occurred. Then Mr. Entous mentioned that he had a transcript, but then, again both denied that anything untoward happened and they totally discounted the validity of the transcript. Finally, Mr. Entous explained that he also had  a copy of the recording which he had listened to for verification purposes. This time both said that whatever comments that were on the tape, were done in jest.

Here’s what he verified:

“There’s two people I think Putin pays: Rohrabacher and Trump,” McCarthy (R-Calif.) said, according to a recording of the June 15, 2016 exchange.

Why is this recording so important? It is because these same republicans ended up supporting Mr. Trump as he became the 45th US president and they are the ones who have been covering up for him. The question is, how could they do this when they suspected he was being paid by Russia, months before he was elected.

As per the 7/16/18 Crooks and Liars report by Karoli Kuns, “Is anyone surprised to discover the Congressman appears to be Dana Rohrabacher?

NEW: I can confirm that the US Congressman who allegedly met with Butina and Torshin in August 2015 in Moscow was Dana Rohrabacher. 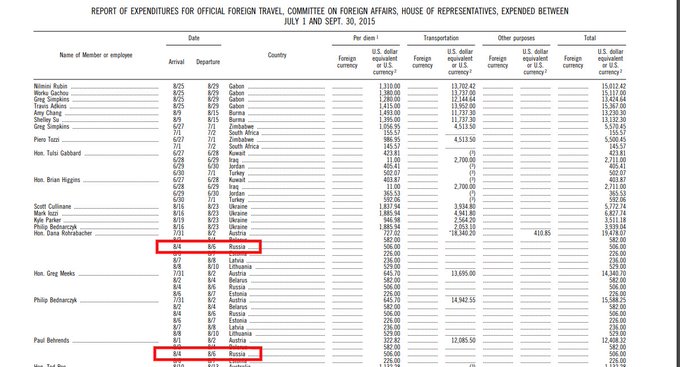 Congressional records show that Rohrabacher and Paul Behrends were in Moscow in August 2015:

Note: Did anyone notice that it was Ms. Maria Butina who has recently been arrested was the one who purchased the airline tickets for Rep. Rohrabacher. She was representing gun rights in Russia which frankly, doesn’t exist.

As per the 7/16/18 Crooks and Liars report by Karoli Kuns, “Just one month after riding down the escalator and announcing his candidacy for president in 2015, Donald Trump attended FreedomFest, a libertarian event in Las Vegas. During the Q&A, a young Russian woman had the opportunity to ask a question.”

“Mother Jones reports that Maria Butina asked him what he would do about sanctions on Russia, if elected. Trump responded that he would try to get rid of them.”

“I am visiting from Russia,” Butina said into the mic.

“Ahhhhh, Putin!” Trump interjected, prompting laughter from the audience as he added a mocking riff about the current president: “Good friend of Obama, Putin. He likes Obama a lot. Go ahead.”

“My question will be about foreign politics,” Butina continued. “If you will be elected as president, what will be your foreign politics especially in the relationships with my country? And do you want to continue the politics of sanctions that are damaging of both economy [sic]? Or you have any other ideas?”

“After going off on Obama and digressing into trade policy, Trump responded: “I know Putin, and I’ll tell you what, we get along with Putin… I believe I would get along very nicely with Putin, OK? And I mean, where we have the strength. I don’t think you’d need the sanctions. I think we would get along very, very well.”

“Butina was arrested Sunday (7/15/18) (by FBI) on charges that she failed to register as a foreign agent. In the charging documents, she is linked to Alexander Torshin, a Russian oligarch and funder of the NRA. But there’s more:”

“Butina is accused of developing relationships with American politicians and a “gun rights organization,” none of which are named in the affidavit supporting the criminal complaint. FBI Special Agent Kevin Helson wrote that Butina was attempting to “establish a ‘back channel’ communication for representatives of the Government of Russia.”

“The affidavit also contains apparent communications, by direct message on Twitter, between Butina and the unnamed Russian official. “Your political star has risen in the sky,” the official told Butina. “Now it is important to rise to the zenith and not burn out (fall) prematurely,” and they later discussed the “Russia-USA friendship society.” 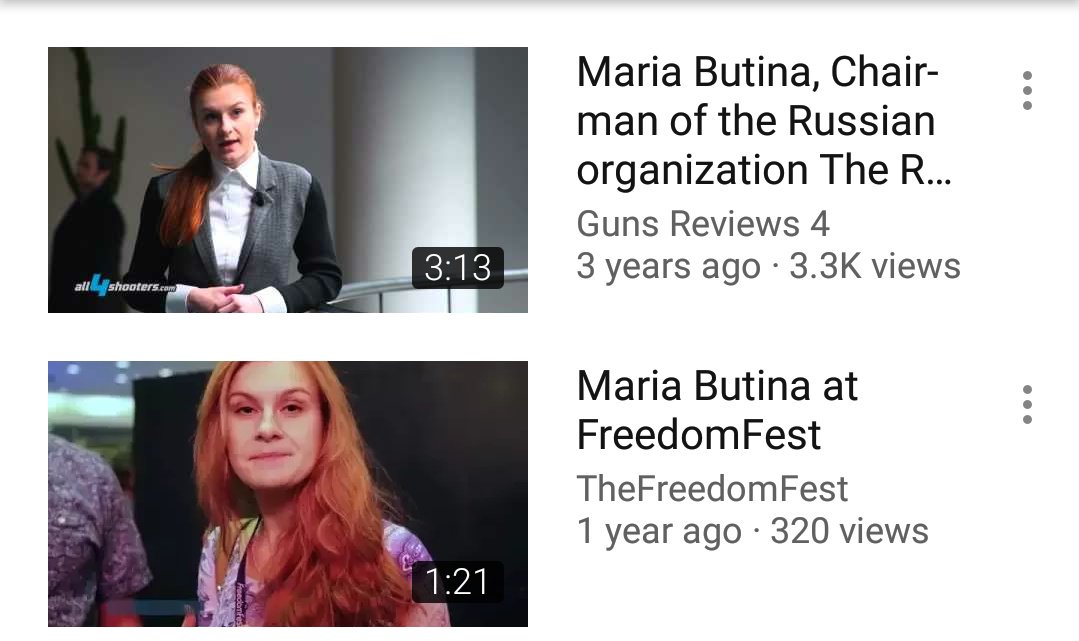 “It’s pretty clear the gun rights organization is the NRA, who may have laundered Russian money to help elect Donald Trump.”

“Mother Jones has been on this story for a long time. Their Butina timeline lays out how she was promoted by the Republican Party and allowed to infiltrate their ranks, beginning in 2011.”

“She began reaching out to NRA members and other American gun enthusiasts in 2013, on several occasions hosting NRA executives and gun activists in Moscow, including one delegation that included former Milwaukee Sheriff Dave Clarke. She and Torshin also attended a series of NRA events in the United States starting in 2014.”

“As she traveled the U.S., she had a number of key interactions with the Trump campaign. In June 2015, as Trump announced his candidacy, Butina wrote a column in the National Interest, a conservative U.S. magazine, suggesting that only by election a Republican could the U.S. and Russia hope to improve relations.”

“And then came her opportunity in Las Vegas to get Trump on the record about sanctions, which she did.”

“According to the affidavit filed by the FBI, Russians were confident in 2015 that Republicans would take control of the government and used Butina to arrange “backchannel discussions” to promote Russian interests.”