GOP Freedom Caucus In US Congress Have Filed Impeachment Papers VS. AG Rosenstein

A long-simmering fissure between Speaker Paul Ryan and President Donald Trump’s top GOP allies in the US House, the Freedom Caucus members, has finally reached its boiling point as both sides fight over an effort to oust Deputy Attorney General Rod Rosenstein who oversees the FBI’s Trump-Russia probe, headed by the FBI’s Special Counsel Robert Mueller III. On the 25th of July, 2018 these members followed up on their threat to file for articles of impeachment against Mr. Rosenstein.

It is my opinion that this action by Freedom Caucus members is as a result of the GOP Committee members of the US House Oversight Committee and the House Judiciary Committee being embarrassed by negative news reporting when they held a joint committee hearing on July 12, 2018 as they interviewed the FBI agent who had texted unflattering messages about President Trump before being removed from key FBI investigations around July 2018. They were furious when they found out that they had been described by most media outlets’ reports as acting like unhinged, desperate persecutors in their attempts to humiliate the FBI agent Peter Strzok as a proxy for disparaging the FBI’s Trump-Russia probe.

“Gowdy scoffed at the suggestion on national television (7/16/18). And Ryan — who has long sought to avoid such confrontations with the Justice Department — told reporters Tuesday morning that DOJ is “now coming into compliance” with congressional subpoenas as part of lawmakers’ scrutiny into alleged FBI bias against Trump.”

“But those comments drew a swift rebuke from conservative Reps. Mark Meadows (R-N.C.) and Jim Jordan (R-Ohio), who are leading the impeachment campaign and argue that Rosenstein is slow-walking their oversight of the FBI. Meadows told reporters Tuesday morning that Ryan appeared misinformed about what Justice has and has not turned over.”

“I can tell you that I guess the speaker’s staff is not fully informing him of what DOJ’s actually complying with,” Meadows said.”

These impeachment filings against the US Department of Justice’s Deputy Director Rod Rosenstein will go nowhere, but this maneuver pleases President Trump’s base of voters. It gives the president’s supporters a reason to discount any law enforcement’s’ findings of the president’s complicity with Russian operators to attack the US elections’ infrastructure in 2016 in order to influence the outcome. 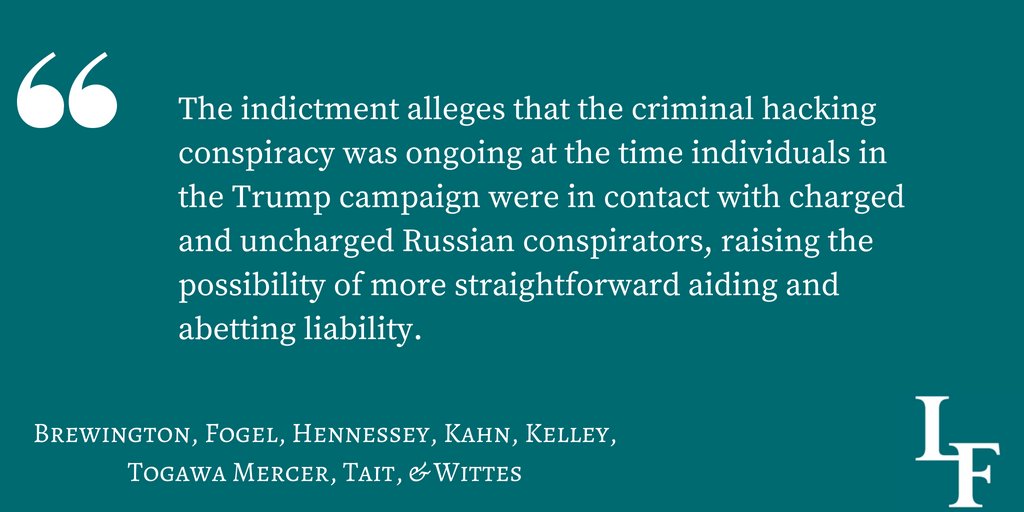 On July 24, 2018, Molly E. Reynolds of LawFare penned the following report, “Reading Between the Lines on House Efforts to Impeach Rod Rosenstein”

“Reports that a group of House conservatives—led by Rep. Mark Meadows (R-N.C.), the chairman of the House Freedom Caucus—are advocating the impeachment of Deputy Attorney General Rod Rosenstein have been circulating for months, but conflict over the issue has escalated. House Speaker Paul Ryan (R-Wis.) and the chairman of the House Oversight and Government Reform Committee, Trey Gowdy (R-S.C.) have opposed the idea publicly, but that doesn’t appear to have dissuaded Meadows and his allies from pushing forward.”

“A Rosenstein impeachment resolution wouldn’t be the first time that Freedom Caucus members and their allies turned to a question of the privileges of the House to make a point or exert leverage. The motion to vacate the chair that members used to threaten Speaker John Boehner (R-Ohio) in 2015 is such a question of the privileges of the House. The 2016 effort to impeach IRS Commissioner John Koskinen was another such effort. And while they involve a different chamber and different procedures, efforts by Sens. Bernie Sanders (I-Vt.), Mike Lee (R-Utah) and Chris Murphy (D-Conn.) to force a vote on U.S. involvement in Yemen arose from a similar impulse: When rank-and-file members cannot work through ordinary, leadership-approved channels to achieve certain goals, they are apt to engage in procedural mischief to accomplish the same ends. There is clearly demand from some rank-and-file House members for an even more aggressive posture in opposition to Rosenstein, and the procedural status of an impeachment resolution makes an attractive tool in pursuit of that goal.” 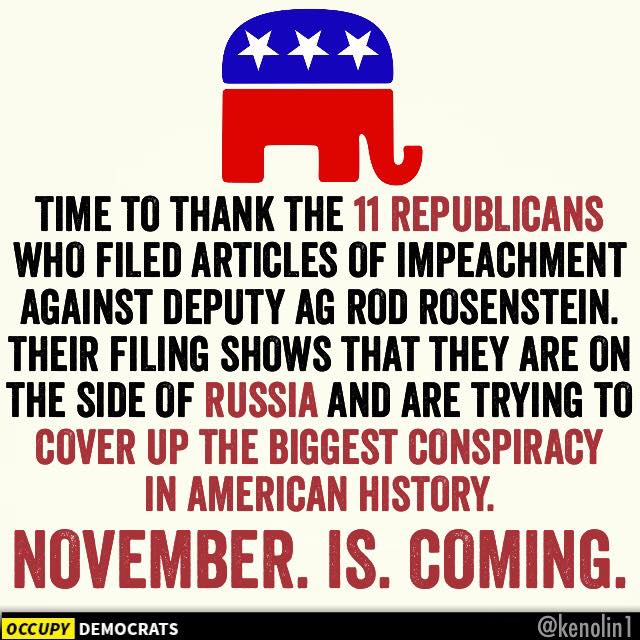 “Importantly, as Glassman also explains, a resolution impeaching Rosenstein, if introduced, wouldn’t necessarily make it as far as a final vote in the House. Impeachment resolutions reaching the House floor via a question of the privileges of the House are relatively rare; according to the Congressional Research Service, four did so between 1995 and 2014, and all were dispatched on procedural votes. The most recent examples—the resolution directed at Koskinen and two offered by Al Green (D-Tex.), targeting President Trump, in December 2017 and January 2018—met a similar procedural fate. The skepticism Ryan and Gowdy expressed is likely to carry over to many other rank-and-file Republicans, and Democrats would probably join a core group of GOP leadership allies in dispensing with the impeachment resolution procedurally. Senate Republicans also appear unconvinced that pursuing impeachment has merit; Majority Leader Mitch McConnell (R-Ky.) described the idea as “pretty far-fetched” last week.”

In other words, the actual impeachment of Rosenstein is unlikely, but the effort speaks to an important political dynamic facing House Republicans. Certainly, the substance represents another piece of the attempt by some congressional Republicans to undermine the Russia investigation and the FBI.  But politically, this effort—like many issues prioritized by the Freedom Caucus and its allies—has the potential to play a role in a broader fight looming on Capitol Hill: the race to replace Ryan as the House Republican leader. The two top contenders to succeed Ryan—Rep. Kevin McCarthy (R-Calif.) and Rep. Steve Scalise (R-La.)—have an incentive to be solicitous toward the right flank of their caucus. Their behavior in recent weeks has borne this out; McCarthy, for example, has supported efforts by conservatives to hold a vote on a resolution compelling the Justice Department to hand over documents related to FBI investigations during the 2016 campaign. Scalise, meanwhile, was a major proponent of a plan—ultimately squashed by Ryan—to bring an “Abolish ICE” bill sponsored by Democrats to the floor as a way of forcing members to go on the record on the issue. The internal politics of the House Republican conference—intensified by the leadership race—have the potential to shape how the party maneuvers over the next several months on Rosenstein specifically and the FBI and Justice Department more generally.