Another Mass Shooting At Madden Video Game Tournament In Jacksonville, FL On August 26, 2018

There is a developing story about a mass shooting event that occurred on the 26th of August 2018 around 1:30 pm in the Jacksonville Landing area, FL. where a Madden Video football gaming tournament was being held and being live-streamed. The news’ details are sketchy but so far,  it is being reported that there have been 3 fatalities and wounding up to 9 victims.

One of the fatalities includes the 24 year old White suspect, David Katz from the Baltimore, MD area. At least one hand gun was used.

Nothing more has been shared but this post will be updated as more information becomes available.

My question is why has Florida become a designated location for mass shootings? There has been the Pulse nightclub Orlando shooting in 2016, the Parkland High School tragedy in 2018.

“The authorities in Jacksonville, Fla., said there were “multiple fatalities” at a mass shooting on Sunday at a bar that was hosting a live gaming event during which 12 gunshots could be heard.”

“There was one gunman in the shooting and he was dead at the scene, Sheriff Mike Williams of the Jacksonville Sheriff’s Office said at a news conference. He described him as a white man and said the authorities were waiting to confirm his identity.”

“He did not provide a count of the number of people who were killed or wounded. The sheriff’s office said on Twitter that “many” had been transported.”

“Just before the shots were heard on the live stream, a red laser dot appeared on the chest of one of the players, who was wearing white headphones and a red sweatshirt. The video of the players then disappeared.”

“Sujeil Lopez was at home in the Tampa Bay area, in Florida, when she got a call that her 25-year-old son, who goes by Larry, had been shot.”

“He was shot three times, once on the nipple, once on his hand and somewhere else,” Ms. Lopez said.”

Her son is a professional video game player for the Bucks Gaming team, according to his Twitter profile.

A professional video game organization, compLexity Gaming, said on Twitter that it had a player at the tournament who “suffered a small injury” when a bullet grazed his hand but that “he is away from the scene.”

“The player, whose name was listed as Drini Gjoka on Twitter, tweeted on Sunday that the “tourney just got shot up.”

“I am literally so lucky,” he said. “The bullet hit my thumb.” In another tweet he said he would “never take anything for granted ever again.”

“Ryan Aleman, who was at the bar, told CNN that he saw “at least six bodies on the floor” of people who had been shot.”

“On Twitter, the sheriff’s office said the shooting was at the Jacksonville Landing, a collection of restaurant and stores. “Stay far away from the area. The area is not safe at this time,” it said in the tweet.”

“Doctors at UF Health Jacksonville told reporters that the most seriously injured of the patients there had been shot in the chest. Three patients were shot once; the others were shot more than once, said Dr. Marie Crandall, a trauma surgeon. The patients range in age from 20 to 35.” 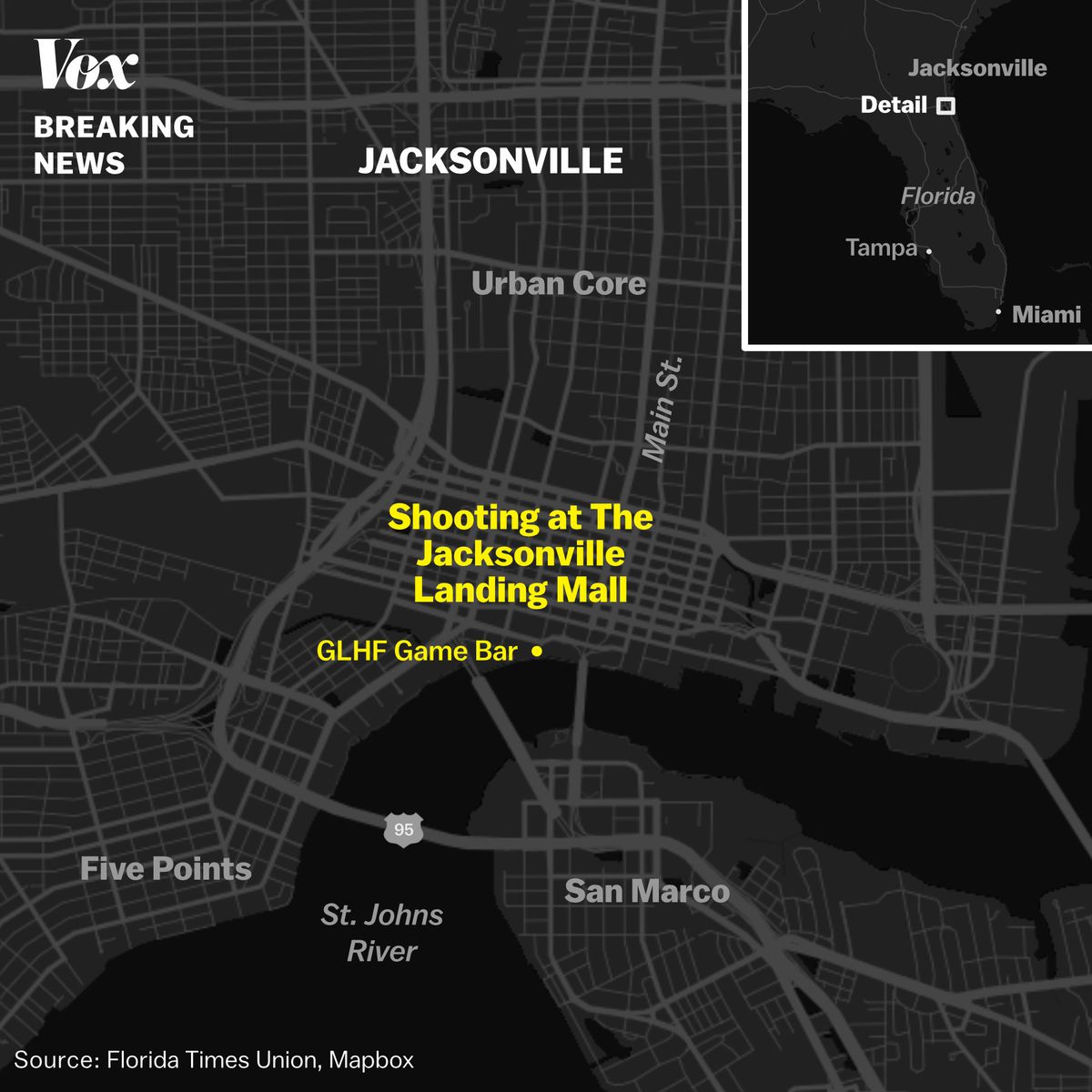 “The shooting happened at the GLHF Game Bar, which was hosting a tournament that viewers could watch on Twitch, a gaming network owned by Amazon.”

“A video clip shared on Twitter, which has since been taken down, showed the football video game Madden on a television screen.”

“Someone playing as the Atlanta Falcons appeared to have scored, and was kicking off. Tournament commentators remarked that the players were so good that it would not be easy to knock anyone out of the tournament.”

“Then the sound of gunfire begins. Several shots can be heard, one after another.”

“Is there a shooting?” a viewer asked.

The video then cut off.

The bar was scheduled to host a qualifying round for the Madden NFL Championship Series, a gaming tournament.

Madden NFL 19 is the 30th installment of the popular N.F.L. video game series, which has sold over 100 million copies. Developed by Electronic Arts, its release each summer — just before the start of the football season — is practically a holiday for many N.F.L. and video game fans. Madden NFL 19 was released about two weeks ago.

The shooting took place at the southeast regional qualifying contest for the Madden NFL 19 Classic tournament, which advertised a $5,000 grand prize, and was open to any competitors as part of the broader Madden NFL Championship series of tournaments. The top two finishers were to receive a berth in the finals in October.