“Again the outcry from the American peoples has inspired an about turn from the republican President Donald Trump who had previously refused to refer to Senator John McCain as a hero in his message of condolences and to fly the White House flag at half staff on the 27th of August 2018 until Senator McCain was laid to rest.

But right before 4:00 pm on August 27, 2018, somehow President Trump underwent an attitude adjustment to where he changed his actions pertaining to Senator McCain.

Later in the day of 27th of August and as per the 8/27/18 USA Today report by Jessica Estepa and John Fritz, “The U.S. flag flying over the White House was brought back down to half-staff Monday afternoon after an outcry over the decision to raise it just two days after the death of Arizona Sen. John McCain.”

“In his first formal statement on McCain’s death, President Donald Trump said that he respected McCain’s service and had ordered the flags back down. “

“Despite our differences on policy and politics, I respect Senator John McCain’s service to our country and, in his honor, have signed a proclamation to fly the flag of the United States at half-staff until the day of his interment,” Trump said in a statement released by the White House. “

“Trump said he asked Vice President Mike Pence to offer an address at McCain’s ceremony at the U.S. Capitol on Friday. (8/31/18)”

“At the request of the McCain family, I have also authorized military transportation of Senator McCain’s remains from Arizona to Washington, D.C., military pallbearers and band support, and a horse and caisson transport during the service at the United States Naval Academy,” Trump said.”

“Veterans groups on Monday (8/27/18) criticized the decision to lower the flag for only two days.”

“On the behalf of The American Legion’s two million wartime veterans, I strongly urge you to make an appropriate presidential proclamation noting Senator McCain’s death and legacy of service to our nation, and that our nation’s flag be half-staffed through his interment,” Denise Rohan, national commander of the American Legion, said in a statement.”

“As a mark of respect for the memory and longstanding service of Senator John Sidney McCain III, I hereby order, by the authority vested in me by the Constitution and the laws of the United States of America, that the flag of the United States shall be flown at half-staff at the White House and upon all public buildings and grounds, at all military posts and naval stations, and on all naval vessels of the Federal Government in the District of Columbia and throughout the United States and its Territories and possessions until sunset, on the day of interment.  I also direct that the flag shall be flown at half‑staff for the same period at all United States embassies, legations, consular offices, and other facilities abroad, including all military facilities and naval vessels and stations.

IN WITNESS WHEREOF, I have hereunto set my hand this twenty-seventh day of August, in the year of our Lord two thousand eighteen, and of the Independence of the United States of America the two hundred and forty-third.”

Could it be that Senator McCain’s farewell message to the American peoples struck a chord?

As per the 8/27/18 Washington Post report by Avi Selk, Felecia Sonmez and Anne Gearan,“In his final words to the nation before his passing, Sen. John McCain delivered a veiled rebuke of President Trump, calling on Americans to rally behind the country’s founding ideals rather than hiding behind walls and succumbing to political tribalism.”

Rick Davis, a McCain family spokesman who was also the Arizona Republican’s campaign manager and longtime adviser, read the letter in full at an emotional news conference Monday at which he also outlined plans for funeral and memorial services in honor of McCain.”

“We weaken our greatness when we confuse our patriotism with tribal rivalries that have sown resentment and hatred and violence in all the corners of the globe,” McCain wrote in the letter. “We weaken it when we hide behind walls, rather than tear them down, when we doubt the power of our ideals, rather than trust them to be the great force for change they have always been.”

“Speakers at Saturday’s memorial service will include members of McCain’s family as well as former presidents George W. Bush and Barack Obama, former secretary of state Henry Kissinger, and former senator Joe Lieberman, one of McCain’s closest friends in the Senate, Davis said. The service will also include a performance of the Irish ballad “Danny Boy” by opera singer Renée Fleming.”

“Former vice president Joe Biden, McCain’s longtime Senate colleague, is expected to speak at a separate service for the Arizona Republican in Phoenix on Thursday.”

“Arizona Gov. Doug Ducey (R) has said he will wait until after McCain’s funeral Sunday to appoint a successor to serve out the remainder of the senator’s term through 2020. Davis did not weigh in at length Monday on the search for a successor, saying only that McCain probably would have wanted to see a Hispanic woman take his place.”

“McCain’s farewell statement did not mention Trump by name but refers at some length to the populist and protectionist forces that helped propel Trump to the office McCain twice failed to win.”

“We are citizens of the world’s greatest republic, a nation of ideals, not blood and soil,” McCain wrote. “We are blessed and are a blessing to humanity when we uphold and advance those ideals at home and in the world.”

“White supremacists who marched in Charlottesville last year chanted “blood and soil,” a translation of a Nazi slogan. Trump appeared to defend the rallygoers, who clashed with counterprotesters, when he said there were “fine people on both sides.”

“McCain also defended the ideals of what came to be known as the liberal world order — the post-World War II architecture of American-led international institutions and alliances that Trump often complains have become a burden. McCain was also alarmed by the rise of far-right populism in Europe and the British break with the European Union that Trump has heralded.”

“I lived and died a proud American. We have helped liberate more people from tyranny and poverty than ever before in history. We have acquired great wealth and power in the process,” McCain wrote.”

He described the U.S. as a country comprised of “three-hundred-and-twenty-five million opinionated, vociferous individuals” who “argue and compete and sometimes even vilify each other in our raucous public debates.”

“But we have always had so much more in common with each other than in disagreement,” he wrote. “If only we remember that and give each other the benefit of the presumption that we all love our country, we will get through these challenging times. We will come through them stronger than before. We always do.” 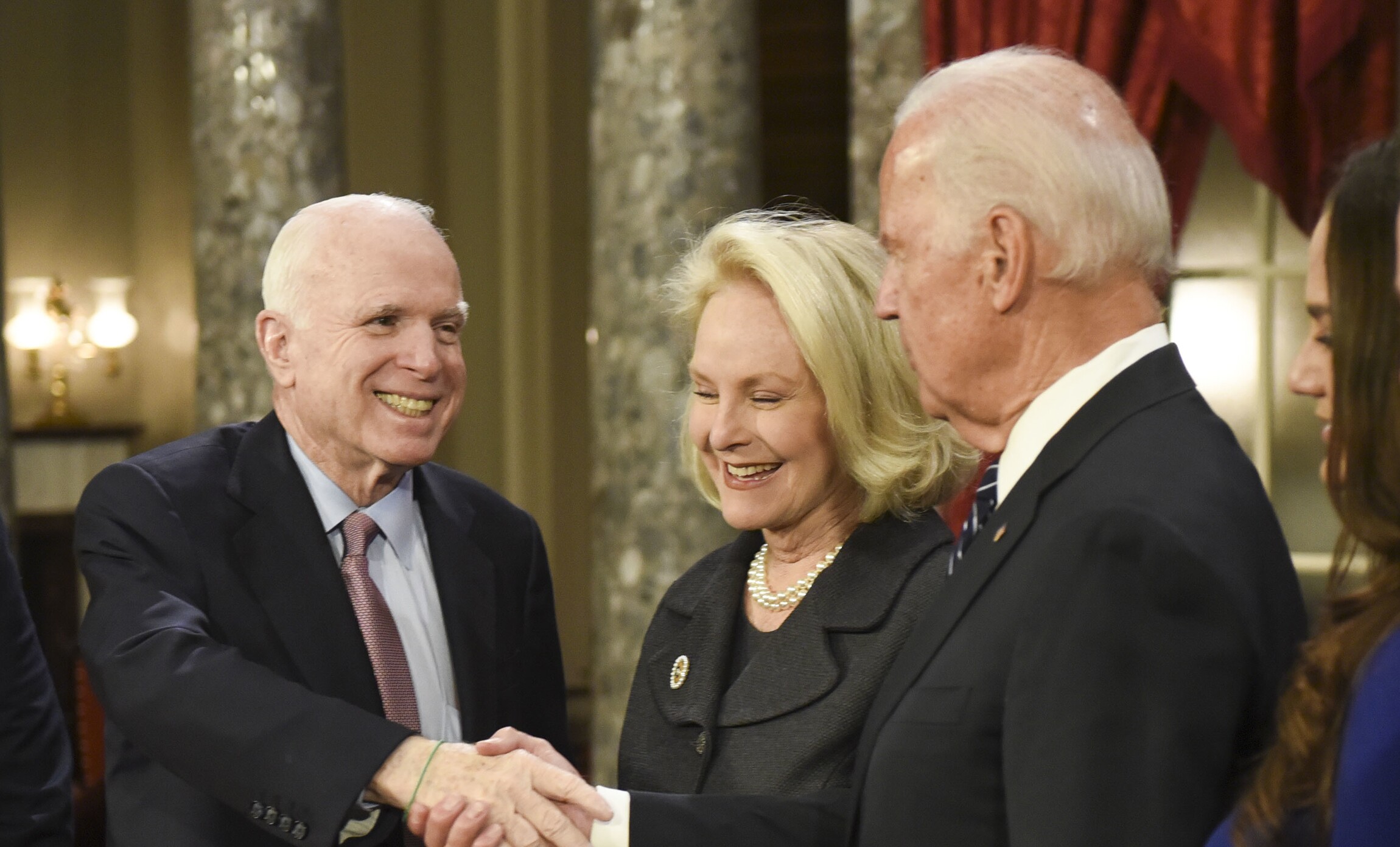 On August 27, 2018, Jennifer Rubin of the Washington Post penned the following op-ed piece, “McCain gets the last word on Trump”

Trump, showing his low character and lack of class, won’t put out a statement. His aides who feel bad leak that their boss is an ungracious, classless thug. But they don’t feel bad enough to quit. Then, as if to put an exclamation point on his own loathsomeness, Trump had the White House flag back to full-staff by Monday morning. Still, no one in the White House feels compelled to leave after such a grotesque display of incivility and heartlessness. And you wonder why many Americans have no respect for White House staff members nor think they should get a free pass into polite society when their time in the White House ends?”

“At any rate, McCain even in death was able to illustrate what a small, self-absorbed character now occupies the White House. And we shouldn’t be surprised in the least. Why would someone like Trump respect McCain, or even recognize the need to simulate respect?”

In other words, McCain’s greatness, in part, is revealed by the friends he attracted and the enemies he made. His party is defined now by the man whose low character is revealed each and every day.

Link to entire report: McCain gets the last word on Trump