Right off the bat, I confess to a bias on behalf of Serena Williams. She’s want I wish my granddaughter to aspire to emulate, someone who belies the odds to become all that she was meant to be, not constrained by what others want her to be or to act like, as a female. She is an athlete par excellence, a fighter, assertive, strong and a decent, honorable role model.

By now, most peoples who follow the news have learned that  Serena Williams argued with the umpire Carlos Ramos during the recent women’s singles final match against Naomi Osaka at the US Open. It is admittedly true that my hero acted emotionally and unrestrained on this occasion. It is also true that the umpire was overly harsh in delivering the penalty of a lost point at the worst possible time in the game.

Here’s what I perceive to be true. Serena Williams was coached from the sidelines with a signal that was obvious, (but which probably she didn’t see), however, it is also true that this happens frequently in tennis matches without the offenders being penalized. It is true that Serena Williams reacted badly to having called out on this by calling the umpire a “thief,” but others have said lots worse without having been censured.  After she called the umpire a “thief” and a “liar,” she accused him of sexism which has a ring of truth to it.

As per the 9/9/18 Eurosport report by Dan Quarrell,”Ramos sent Williams into a further rage when he handed the 23-time Grand Slam champion a game penalty for the verbal abuse.”

“Serena Williams’ coach, Patrick Mouratoglou, has admitted that he was making hand gestures after she was hit by a coaching violation in the controversial US Open final won by Naomi Osaka 6-2 6-4.” 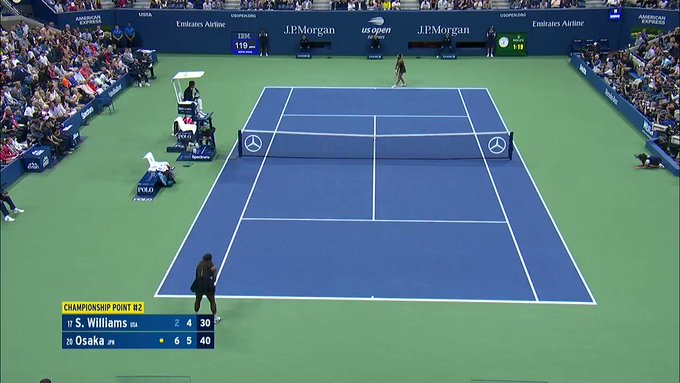 “With Osaka in control of the match after taking the first set, Portuguese chair umpire Carlos Ramos sent Williams into a rage when he handed the 23-time Grand Slam champion a code violation in the second game of the second set after he spotted Mouratoglou making hand signals from the player’s box.”

“(Coach Patrick) Mouratoglou later admitted that he was coaching but added that it was not uncommon and that his opposite number, Osaka’s coach Sascha Bajin, was doing the same.”

” I am honest. I was coaching. I don’t think she looked one time. Sascha was coaching every point too.”

It is my opinion, that the athlete Serena Williams, who had worked incredibly hard for this moment, paid a much higher price than she should have at the hands of this umpire. She was penalized an entire game which made it impossible for her to get her mojo back to give her all to the game. At the point of the penalties, she was losing but not where she couldn’t come back as she has done in numerous occasions in the past.

In the end, she did recover enough to graciously congratulate the winner, as she lost the match in straight sets to 20-year-old Naomi Osaka.

In summary, Serena Williams said the incident was a case in point of the glaring double standards according to which male and female tennis players are judged, and I concur with her.

But however, her fans or detractors come down on what happened at the US open, the following racist cartoon is out of bounds.

On September 10, 2018, Michelle Garcia of VOX penned the following report, “A new editorial cartoon shows yet another racist depiction of Serena Williams”

An Australian newspaper ran a nasty editorial cartoon on Monday, attempting to capture the fallout of the contentious US Open women’s final that ended in controversy over the weekend.

Herald-Sun cartoonist Mark Knight’s image shows a monstrous, hulking depiction of Serena Williams stomping her racket into the ground. A discarded pacifier lies nearby, as if Williams is a toddler throwing a tantrum. In the background, umpire Carlos Ramos asks her opponent, Naomi Osaka, “Can you just let her win?”

My toon in today’s @theheraldsun on #SerenaWilliams @usopen

“The women’s final ended with Osaka winning the match, after Williams got into a dispute with Ramos over scoring penalties. The penalties followed an initial verbal warning that Ramos issued to Williams about receiving coaching from the sidelines. Williams first challenged Ramos over the coaching call; later, after Williams smashed her racket in frustration over losing a game, Ramos penalized her by a point for the racket abuse.”

“After that, Williams called him a “thief,” and he ultimately penalized her by an entire game for what he said was verbal abuse. Both during and after the match, Williams called out the sexist double standards that she says colored Ramos’s calls, specifically noting that many male tennis players have not been penalized as harshly (or at all) for similar (or worse) outbursts.”

“Whether or not you think Williams’s behavior during the match warranted the penalties that eventually cost her the game, Knight’s depiction of Williams is a jarring reminder of insidious, racist tropes that undercut black women in America. And Williams has repeatedly been a target of those tropes — despite the fact that she’s one of the most prominent, successful athletes in the world, regardless of gender — throughout her storied career.”

“(For contrast, it’s worth noting how Osaka, who is Japanese and Haitian, is depicted in the cartoon as lithe, expressionless, and, as some have observed, seemingly whitewashed.)” 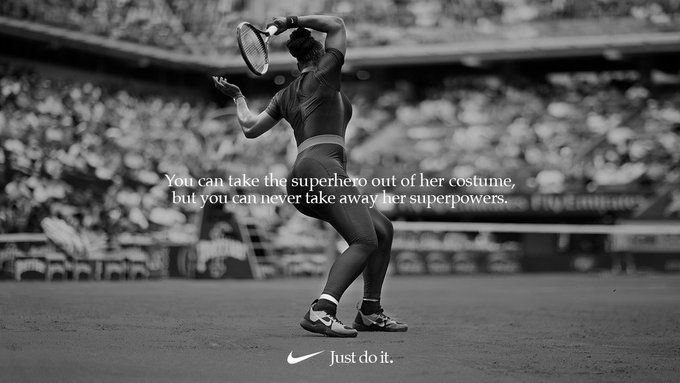 You can take the superhero out of her costume, but you can never take away her superpowers. #justdoit

“Knight’s cartoon is a literal illustration of the way society is quick to degrade women — and black women in particular — when they don’t fall in line with the ways women are “supposed” to act. Not only is Williams depicted as a petulant toddler for having spoken up about what she felt was a sexist call, but also as a hulking, animal-like brute.”

As Jenée Desmond-Harris has previously detailed for Vox, Williams’s career has long been marked by racist remarks and assumptions made by tennis spectators, fellow players, and the media. After Williams won the French Open in 2015, for example, Desmond-Harris wrote:”

“Williams was compared to an animal, likened to a man, and deemed frightening and horrifyingly unattractive. One Twitter user wrote that Williams “looks like a gorilla, and sounds like a gorilla when she grunts while hitting the ball. In conclusion, she is a gorilla.” And another described her as “so unbelievably dominant … and manly.”

“Knight’s cartoon picks up these assertions and runs with them.” Williams’s body, like the bodies of many other women athletes, is under constant scrutiny. But as a muscular black woman whose career is full of wins, Williams regularly becomes the subject of commentary that is simply degrading at best, and openly racist at worst. It often harks back to a time when women of color were treated like curiosities.”

“Knight’s illustration seems to equate Williams with figures like Saartjie Baartman, also known as the Hottentot Venus, an African woman who was paraded before European audiences as nothing more than a freak-show attraction. “No matter how insanely successful black women like Serena become, the legacy of the Hottentot Venus will always be ready to rear its ugly head at an opportune moment,” Anita Little wrote in 2012 for Ms. Magazine.”

Williams’s detractors have singled out her body as mockable, and her femininity as debatable, because of her strength and skill.”

Link to entire report: A new editorial cartoon shows yet another racist depiction of Serena …