President Keeps Writing The Script To Conflate Immigration With Terrorism

Counterterrorism officials have issued a letter to the US Department of Justice (DOJ) and the US Department of Homeland Security (DHS) to correct a misleading report that conflates immigration and terrorism. The republican President Donald J. Trump’s administration required a study to justify its travel ban and to back the president’s assertions that the US allowing for immigration even at the US-Mexican border invites terrorist / criminal activities and is consequently, a national security risk. Never mind, that the study is flawed and not based on sound data.

Well it seems that the professionals who actually have to deal with terrorism want to do their jobs based on fact-based evidence and not the president’s trumped up version that he requires to look good for the anti-immigration faction of his base of supporters.

Eighteen former counter-terrorism officials are urging the departments of Justice and Homeland Security to retract or correct a report that implies a link between terrorism and immigration, calling its findings “misleading” and counterproductive. 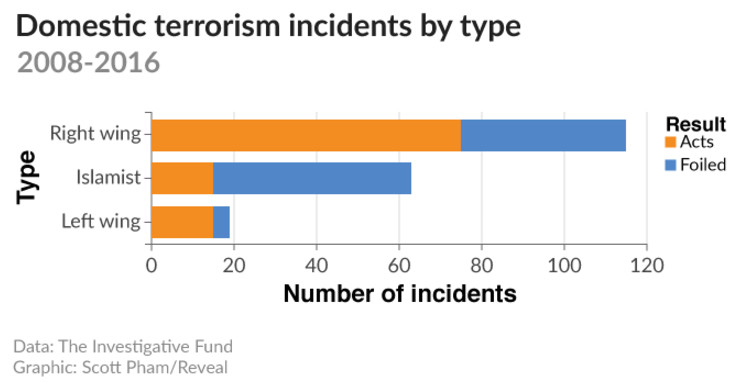 “Released in January, the report says that 402 of the 549 people — almost three out of four — convicted of terrorism charges since the Sept. 11, 2001, terrorist attacks were foreign-born. That’s a data point that President Trump has highlighted as justification for his administration’s hard-line immigration policies — namely his desire to shift from a “random chain migration and lottery system, to one that is merit-based,” as he has tweeted. But critics dubious of the report’s conclusions have said it relies on irrelevant and, in some cases, flawed data.”

“Overall,” their letter says, “the report appears designed to give the misleading impression that immigrants — and even their citizen family members — are responsible for the vast majority of terrorist attacks that have occurred in the United States.”

“The report was written to comply with an executive order Trump issued in March 2017 banning citizens from six predominantly Muslim countries from entering the United States.”

“Katie Waldman, a Department of Homeland Security spokeswoman, said the agency is “focused on anticipating terrorist trends and movements and, more importantly, blocking all terrorist pathways into the United States.”

She said “as recently as last month, U.S. authorities arrested an Iraqi refugee in California — wanted for murder in Iraq — who is alleged to have been a member of both [the Islamic State] and al-Qaeda. We cannot let dangerous individuals slip through the cracks and exploit our refugee program.”

“The former counter-terrorism officials’ letter was written in support of an appeal to be filed Thursday by several advocacy groups that sued the two agencies in federal court in Oakland, Calif., and Boston. The organizations are seeking a retraction or correction under a little-known  law, the Information Quality Act.”

The courts stayed the lawsuits when the agencies answered the plaintiffs, with the Justice Department saying in July that the plaintiffs’ charge that the report perpetuates a biased narrative is “a subjective conclusion” based on their interpretation of the report.

“DHS in August said the plaintiffs did not “specifically challenge the accuracy of the data” but rather requested that it be retracted to “correct the misimpression” that it supposedly created.”

“Critics say the conviction data should not include roughly 100 foreign-born individuals detained overseas and extradited to the United States to be tried for alleged crimes committed abroad.”

“Moreover, said Ben Berwick, an attorney for Protect Democracy, according to data provided by the Justice Department under a Freedom of Information Act lawsuit, at least 189 of the individuals included in the total of 549 convicted were caught up in an investigation with a link to international terrorism investigation but not charged with an offense directly related to terrorism. It is unclear how many of these people were born overseas or in the United States, he said.”

“The key issue with the report, said Joshua Geltzer, a former National Security Council senior director for counter-terrorism, is it emphasizes a person’s place of birth as a “meaningful predictor” of terrorist activity rather than understanding the radicalization process.”

“There are U.S. citizens born and bred here who unfortunately radicalize, too,” said Geltzer, now at Georgetown University’s Institute for Constitutional Advocacy and Protection.”

“The report says that 147 individuals convicted of international terrorism charges were U.S. citizens by birth. But much of it details cases involving people born overseas who entered the United States through the immigration process or as refugees.”

“The former officials’ letter said the report plays into terrorists’ hands, noting that “one particularly common way for terrorists to attempt to weaken their stronger adversaries is to sow discord and prod them into turning on themselves.” Echoing language used in the debate over how to deter Russian interference in U.S. democracy, the letter said that “cultivating resilience against terrorism thus relies in part on ensuring that the public accurately understands the real nature of the terrorist threat.”

“The real drivers of terrorism are disaffection, a lack of belonging, “a grandiose desire to be part of something seen as ‘bigger,’ and a gradual numbing to the humanness of potential victims,” the former officials’ letter says.”

“The Trump administration wants to blame the immigration system for things that happened 15 to 20 years after people flowed through the system,” Geltzer said. “That’s a radicalization problem. Not an immigration problem.”

See: Unpacking the president’s claim that ‘nearly 3 in 4’ convicted of terrorism are foreign-born