aside Why Dr. Ford Is Requesting FBI Inquiry Into Her Sexual Assault Claim V. Judge Kavanaugh

It’s impossible to miss the parallels between the Dr. Christine Blasey Ford/ Judge Brett Kavanaugh confirmation hearing of 2018 and the 1991 confirmation hearing for Justice Clarence Thomas who is still sitting on the US Supreme Court. In 1991, the Senate Judiciary Committee with the same republican Senators Chuck Grassley and Orrin Hatch overseeing the process, had an opportunity to demonstrate its appreciation for both the seriousness of sexual harassment claims and the need for public confidence in the character of a nominee to the Supreme Court, but they failed dismally. They were able to rush the process to where Anita Hill’s claims of sexual harassment against Clarence Thomas were discounted through a hearing that was anything but fair. After he was confirmed, the public learned that there were 3 other women who had been willing to come forward with similar allegations.

Some of the Republican Party senators are acting as if Dr. Christine Blasey Ford’s resistance to be rushed into a hearing that the Senate Judiciary Committee’s Chairman Chuck Grassley (R-IA) has scheduled for the 24th of September, as somehow suspect, instead of her simply, demanding that she and her claims be treated with respect. She’s listening to the advice of Anita Hill who suffered a similar experience back in 1991 but who was not treated well.

As per the 9/18/18 Reuters report, “A woman (Dr. Christine Blasey Ford) who has accused President Donald Trump’s Supreme Court nominee, Brett Kavanaugh, of sexual assault decades ago wants her allegations to be investigated by the FBI before she appears at a U.S. Senate hearing, her lawyers said on Tuesday (9/18/18).

Link to entire article: Kavanaugh accuser wants FBI investigation before she will testify

As per Anita Hill’s own words in her 9/18/18 New York Times opinion piece:

“Here are some basic ground rules the committee should follow:

“Refrain from pitting the public interest in confronting sexual harassment against the need for a fair confirmation hearing. Our interest in the integrity of the Supreme Court and in eliminating sexual misconduct, especially in our public institutions, are entirely compatible. Both are aimed at making sure that our judicial system operates with legitimacy.”

“Select a neutral investigative body with experience in sexual misconduct cases that will investigate the incident in question and present its findings to the committee. Outcomes in such investigations are more reliable and less likely to be perceived as tainted by partisanship. Senators must then rely on the investigators’ conclusions, along with advice from experts, to frame the questions they ask Judge Kavanaugh and Dr. Blasey. Again, the senators’ fact-finding roles must guide their behavior. The investigators’ report should frame the hearing, not politics or myths about sexual assault.”

“Do not rush these hearings. Doing so would not only signal that sexual assault accusations  are not important — hastily appraising this situation would very likely lead to facts being overlooked that are necessary for the Senate and the public to evaluate. That the committee plans to hold a hearing this coming Monday is discouraging. Simply put, a week’s preparation is not enough time for meaningful inquiry into very serious charges.

“Finally, refer to Christine Blasey Ford by her name. She was once anonymous, but no longer is. Dr. Blasey is not simply “Judge Kavanaugh’s accuser.” Dr. Blasey is a human being with a life of her own. She deserves the respect of being addressed and treated as a whole person.” 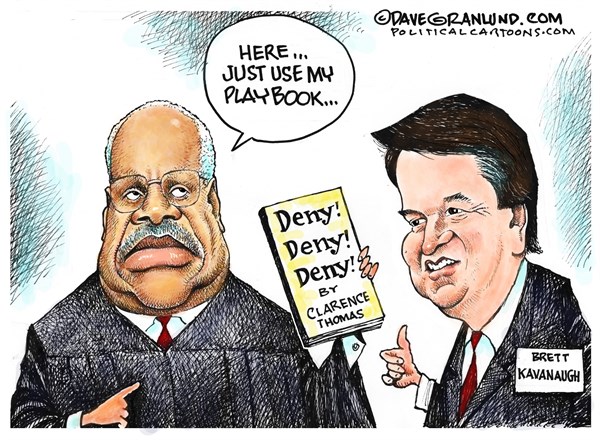 There are several reasons an FBI inquiry which could be conducted within a couple of weeks time period, makes sense. When Dr. Christine Blasey Ford refers to the party in her high school years where she alleges that Judge Kavanaugh attempted to raper her, she refers to another person in the room, Mark Judge who admits to a drinking problem has claimed no memory of this event. In addition, she also knows enough data to name who else was present to where the basic facts of her assertions can be verified. Since Judge Kavanaugh has indulged in outright denials of even being present at a party as described by Dr. Ford, these facts would lend credibility to her claims, which is the last thing that republicans are willing to face.

As per a 9/18/18 @tribelaw tweet, “Maryland (where the alleged party occurred) has no statute of limitations for rape or for assault, so it seems that both Brett Kavanaugh and Mark Judge remain potentially criminally liable for what Christine Blasey Ford alleges they did to her in high school.”

As per a 9/18/18 Ron Klain tweet, “FACT: In 1991 — by bipartisan agreement — the FBI was sent to interview both Prof. Hill and Judge Thomas approx two weeks before the public hearings on Hill’s allegations were conducted.” 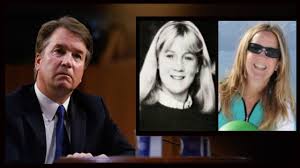 As per a 9/18/18 NBC analysis,  “While some argue that the truth about this incident will come down to a “he said, she said” situation, that’s not how it looks to us. Prosecutors and investigators are confronted with these scenarios frequently and don’t just throw up their hands and say, “We can’t decide.” Instead, prosecutors look for corroborating evidence — and there are strong indications already that Ford is telling the truth about her attack.

Link to entire report: The allegations against Brett Kavanaugh are not simply a ‘he said, she said …

Rushing her to testify before an independent investigation has been conducted is unfair to all the parties involved with the exception of the republican President Donald Trump, his sycophant GOP members in the US Congress and Judge Kavanaugh.

“The woman (Dr. Christine Blasey Ford) who has accused President Trump’s Supreme Court nominee of sexual assault all but ruled out appearing at an extraordinary Senate hearing scheduled for next week to hear her allegations, insisting on Tuesday that the F.B.I. investigate first.”

“Speaking through lawyers, Christine Blasey Ford said she would cooperate with the Senate Judiciary Committee and left open the possibility of testifying later about her allegations against Judge Brett M. Kavanaugh. But echoing Senate Democrats, she said an investigation should be “the first step” before she is put “on national television to relive this traumatic and harrowing incident.” “Republicans signaled Tuesday (9/18/18) night that they would not negotiate an alternative date and would go ahead with the hearing without her or declare it unnecessary if she refuses to appear, then possibly move to a vote. They have repeatedly stressed that Monday would be Dr. Blasey’s opportunity to testify, either privately or publicly, and that they planned to move forward with the confirmation process afterward.”

“The apparent standoff was yet another turn in a high-stakes drama over the president’s second Supreme Court nominee that began Thursday, when the top Democrat on the Judiciary Committee revealed that she had referred the sexual assault allegations to federal investigators. Dr. Blasey, a research psychologist in Northern California, has accused Judge Kavanaugh of sexually assaulting her more than 30 years ago when they were teenagers at a boozy high school party, a charge that he has categorically denied.”

“In a letter sent to the committee on Tuesday evening, Dr. Blasey’s lawyers charged that some senators have already “made up their minds,” but she did not explicitly reject appearing before them. In an appearance on CNN, however, one of the lawyers, Lisa J. Banks, seemed to suggest that Dr. Blasey would not show up on Monday.”

“She’s not prepared to talk with them at a hearing on Monday,” Ms. Banks said. Even if Republicans agreed to an F.B.I. investigation, it would take time to complete, she added. “No legitimate investigation is going to happen between now and Monday.”

“Democratic leaders quickly endorsed Dr. Blasey’s position, but her resistance to coming to the committee on Monday seemed to harden the resolve of Republicans who said they gave her a chance to make her case.”

“Republicans extended a hand in good faith,” said Senator Bob Corker of Tennessee, one of the Republicans who insisted on postponing a vote until she could be heard. “If we don’t hear from both sides on Monday, let’s vote.”