While the number #1 issue that is the concern and worry of the vast majority of voting Americans for this upcoming November 6, 2018 US election day is healthcare, the republicans are scrambling to deflect their attention from this very problem.

While the republicans have made their claim to fame for years for trying to end the 2010 Affordable Care Act (ACA)/ Obamacare, which extends access to quality, affordable healthcare with the mandate for pre-existing conditions’ coverage to millions of previously uninsured folks, they are now caught flat-footed on how to win voters with nothing to offer them, along these lines.

The US Congress representatives have voted/ bragged about having voting against the continuation of Obamacare only 70 times. Currently, 20 Republican led states have filed a law suit which is still in process, against the US government to allow insurance companies in their states to sell healthcare insurance policies without having to cover consumers’ preexisting conditions.

But republicans are taking a page out of their leader, President Donald Trump’s playbook. They are going on TV stating absolutely that they will not allow insurance companies to sell anything that doesn’t cover preexisting conditions. Then the republican President Donald Trump’s rhetoric is coming home to bite him. His history of bullying, demonizing, espousing violence towards others like the press and his favorite enemies’ list starting with CNN and then, Democratic Party individuals including former President Barack Obama, former Secretary of State Hillary Clinton, former Vice President Joe Biden, billionaire donor George Soros, Florida Representative Debbie Wasserman Schultz, California Representative Maxine Waters, Robert De Niro, the billionaire Tom Steyer, to where somehow they have become the victims of a domestic terrorist attack. All of them have been the recipient of mailed manila envelop with pipe bombs during the week of October 22, 2018.

In comparison, the republicans’ talking points about protesting democrats being mobs, somehow doesn’t carry much weight.

Republican lawmakers, leaders have been mostly mum about the president’s leadership regarding incivility in the political discourse.

Then let’s not forget the 2017 tax cuts for the rich, passed by the White House and the GOP US congressional representatives which was paid for in part by adding $1.5 trillion dollars to the US deficit and that this would give corporations the incentive to increase workers’ wages which which have been stagnant over 3 decades.

‘We the people’ have been learning that the tax cuts did not generate the added tax revenues to offset the increase in the deficit, as promised by the White House and the GOP lawmakers in the US Congress. The US deficit has grown by 17%. The GDP (gross domestic product) growth is not expected to exceed 3% for the year which again, is much less than what our elected officials had promised when they passed the 2017 tax cuts bill. Most importantly, the middle class folks/ voters have not seen that promised increase in wages as inflation has negated any increases.

So, now that the republicans can’t sell this tax cuts bill to their voters, but there is President Trump who is coming to the rescue with MORE LIES.

Even though the US Congress representatives who write the laws are out on recess, he is selling the promise that he will be rolling out a 10% tax cuts for the middle class.

The coup de gras for the republicans led by their president, is the issue of a Honduran caravan of refugees heading towards US/ Mexican border as they flee the violence in their country.

They are walking at a rate of 20 miles per day.

The president knows that this caravan will reach to US Mexican border maybe around the first week in December and that most have the legal option as per US and international law to request asylum as many will legitimately claim that they are fleeing in order to save their lives as the violence in Honduras is off the charts. 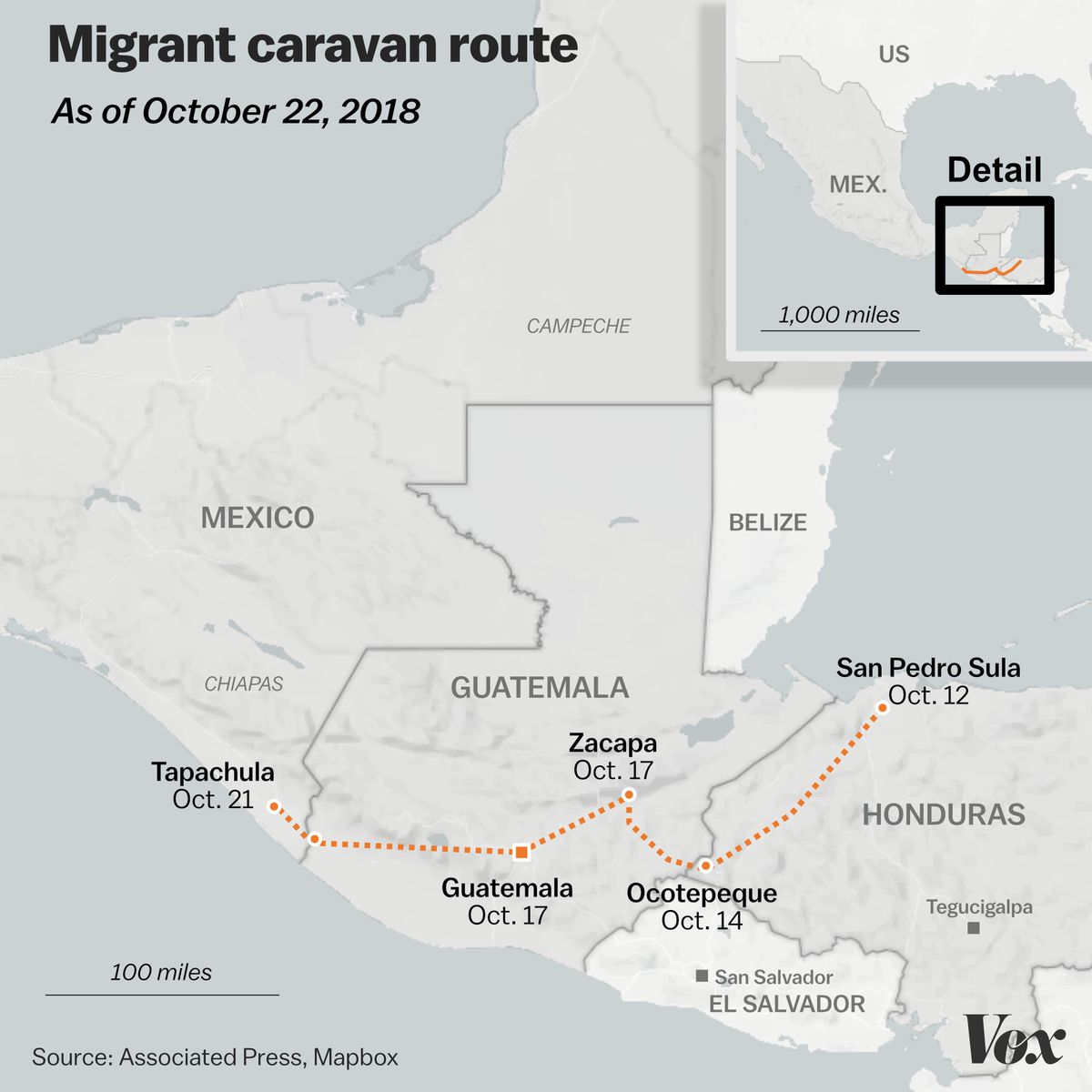 As per a 10/25/18 VOX report by Dara Lind, “On October 12, 2018, a group of about 160 Hondurans set forth from the town of San Pedro Sula (Honduras)— which in the first half of the decade was often referred to as the “murder capital of the world” — in hopes of arriving to present themselves for asylum in Mexico or the United States.

“Seventy-five miles and two days later, the caravan was more than 1,000 strong, according to the estimates of Associated Press reporters. By October 15, the AP estimated about 1,600 Hondurans had amassed at the border with Guatemala.”

“Some of (the caravan members) have pointed to concerns for their safety. One woman told the AP’s Sonia Perez D. that she’d been in hiding after a local gang threatened to kill her because they’d mistaken a tattoo of her parents’ names for a symbol of a rival gang. Another, traveling with her husband and two sons, told the Los Angeles Times’s Kate Linthicum that after her 16-year-old son refused to sell drugs for a gang, “they were going to kill him or kill us.”

The president has come to the republicans rescue again with lies like, there are criminals and middle eastern jihadists in the midst of these crowds. But even FOX News reporters have debunked these claims.

But that doesn’t prevent the president from sending US military forces to the Mexican/ US border before the November 2018 elections even though the caravan of refugees will be nowhere near this border area in this time period. Still, he’s figured out that he can motivate his anti-immigration base of voters to get out and vote for republican candidates by orchestrating this catastrophe out of nothing, while he can appear strong as he fights against immigration.

The executive order to send active US military troops is in the hands of the Defense Secretary General James Mattis, for him to sign. So far, he is one of the few who has managed to keep his reputation in tack while working with President Trump. This is his moment where he has to decide to act on behalf of republican politics or on behalf of the best interests of this country.

But around October 31, 2018, the president has announced that he wants to send an additional 10,000 active military personnel to the US/ Mexican border above the 5,200 that he had previously demanded.

Dear Democrats, Our US Democracy, our neighbors and our own lives are at stake. Save our country/ Go vote by November 6, 2018. 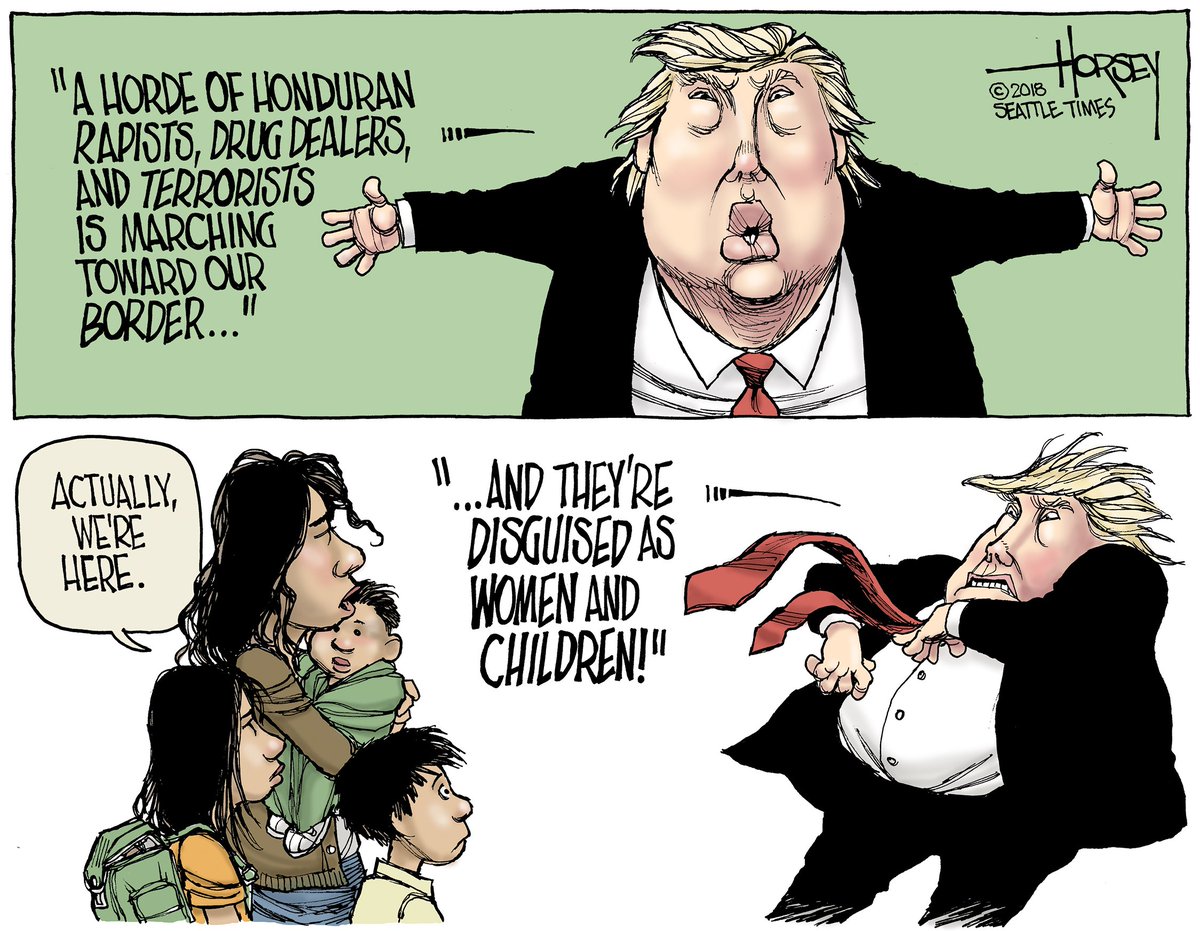