Make no mistake. President Trump has been ruminating since at least May 2017 to order a government shut down because there hadn’t been funds set aside to pay for his US SW wall that he’s been promising his base of anti-immigration hard-liners for years.

There has been ample reporting that President Trump’s rhetoric about the wall had been conceived by his advisers as a tool to remind him to talk about his anti-immigration stance even before he announced that he was running to become the 45th US president in 2015. There is ample evidence that it was this strategy that catapulted him into the White House.

Fast forward to January 2019, President Trump still suffers from this fear of losing his hard core anti-immigration base to where he was easily goaded by right wing pundits into backing out of an agreed upon temporary budget plan (continuing resolution to be in effect until February 2019) with GOP leaders in the US Congress on December 18, 2018. The US senators had already voted to pass on it to where many had left the Washington DC area to celebrate the holidays.

His refusal to to sign off on this continuing resolution designed to keep the US government running unless the Congress funded  $5.7 billion dollars towards the construction of his wall for more than 200 miles along the U.S.-Mexico border, triggered the current government shutdown starting on the 22nd of December 2018. He had to know that the Democrats would never agree to his demands. But with his having precipitated this shutdown where 800,000 public servants wouldn’t receive their pay, he would end up looking tough for his anti-immigration backers.

President Trump stumbled into this situation of because of his deep seated fear of losing his anti-immigration/ racist/ anti-LGBTQ/ anti-Semitic supporters and his inability to devise a long-term strategy for placating them. With a little foresight, he could have avoided promising in advance, live on TV, that he would be proud to take responsibility for a shutdown when having one would inevitably mean that he was going to have to try to blame Democrats for it. Unfortunately that combination of the president needing to placate his base along with his inability to plan ahead, has made it more difficult for him to get out of this shutdown with any hope of saving face.

But in the background, the president’s advisers had been devising a plan where he could state that his not obtaining the funding for his wall constituted a national security crisis, and thereby, he could declare a ‘National Emergency’ based on the National Emergencies Act of 1976 where he could use funds not allocated by the US Congress to have the Army Corp of Engineers start building his wall.

I’ve no doubt that this is his current plan which is unprecedented and which will definitely be challenged in the courts. But this tactic suits his love for a fight, and damn the consequences to the thousands of hard working federal employees and the harm this would do to the US economy.

In a statement Thursday (1/10/19), a Trump ally, Sen. Lindsey O. Graham (R-S.C.) accused the Democratic House Speaker Pelosi of intransigence that has brought talks to an end, and said that “it was time for President Trump to use emergency powers to fund the construction of a border wall/barrier.”

Meanwhile there is NO Guarantee that this action will end this government shutdown which will end up being the longest in US history. As per a 1/10/19 Washington Post report, “The administration is eyeing unused money in the Army Corps of Engineers budget, specifically a disaster spending bill passed by Congress last year that includes $13.9 billion allocated but not spent for civil works projects, two people with knowledge of the developments said Thursday (1/10/19).”

“The White House has begun laying the groundwork for a declaration of national emergency to build President Trump’s border wall, a move certain to set off a firestorm of opposition in Congress and the courts but one that could pave the way for an end to the three-week government shutdown.”

“The administration is eyeing unused money in the Army Corps of Engineers budget, specifically a disaster spending bill passed by Congress last year that includes $13.9 billion allocated but not spent for civil works projects, two people with knowledge of the developments said Thursday.”

“The list (for possible funds) includes dozens of flood control projects in areas affected by recent natural disasters, including the Texas coastline inundated by Hurricane Harvey and parts of Puerto Rico battered by Hurricane Maria. The military construction budget is also being looked at as a potential source for unspent funds, with billions more potentially available there.”

“But on Capitol Hill there were no signs of progress, and instead lawmakers of both parties were bracing for Trump to declare a national emergency.”

“(Democratic Speaker) Pelosi declined to say how the House would respond to a national emergency declaration when questioned at a news conference Thursday (1/10/19).”

“If and when the president does that, you’ll find out how we will react,” Pelosi said. “But I think the president will have problems on his own side of the aisle for exploiting the situation in a way that enhances his power.”

“Indeed, a number of Republicans have expressed qualms or outright opposition about Trump declaring a national emergency, including members of the House Armed Services Committee who object to the prospect of the administration targeting funds within the Pentagon’s military construction budget.” 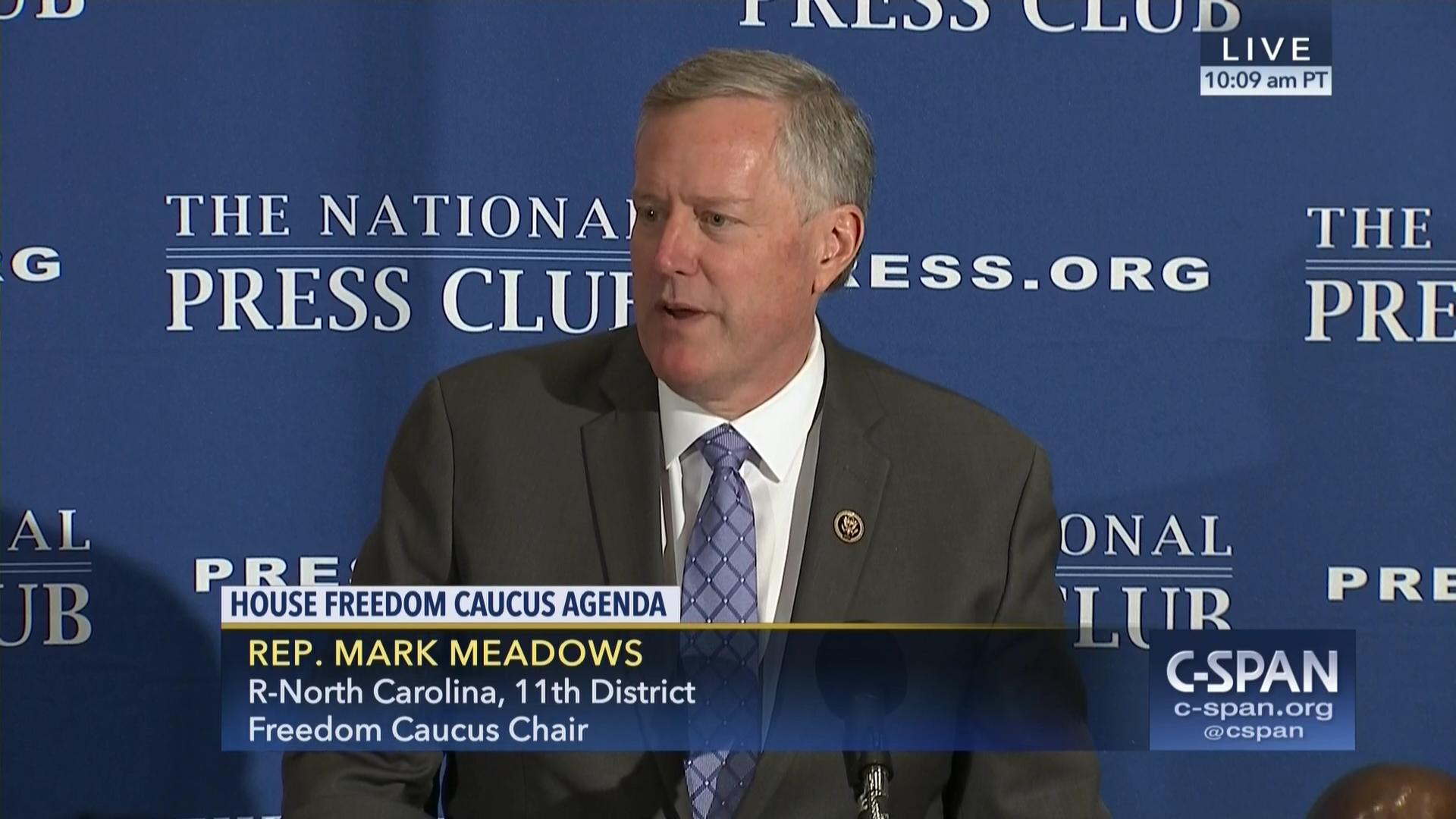 “The House and Senate could move quickly to pass a bill to reopen the government, predicated on assurances from Trump that he would sign the legislation.”

“However, conservative Rep. Mark Meadows (R-N.C.), who talks frequently with Trump, cautioned that a declaration of a national emergency would not necessarily lead to reopening the government.”

“To override an emergency declaration, both houses of Congress would have to pass a resolution doing so and present it to Trump for his signature — one he would presumably veto.”

“The administration can expect a flood of court challenges if it proposes to build a wall without explicit congressional authorization. Indeed, a number of organizations are preparing for litigation.”

“The use of emergency powers to build a wall is unlawful, and we are prepared to sue as needed,” said Lee Gelernt, deputy director of the American Civil Liberties Union Immigrants’ Rights Project, which has helped obtain dozens of court orders blocking Trump administration immigration policies.

“Even as the discussions over a national emergency declaration were taking place, a final glimmer of hope for a way out of the impasse was extinguished when Graham declared talks over among a small group of Republican senators who had been meeting to discuss some kind of broader deal to end the shutdown.”

“These deal-minded Senate Republicans had shuttled Thursday morning between meetings with Senate Majority Leader Mitch McConnell and VP Pence, batting around a proposal that would include Trump’s desired $5.7 billion in wall funding, and a renewable, three-year status for certain immigrants brought illegally to the country as children, along with other provisions.”

“But by midafternoon Thursday, Pence poured cold water on the idea, telling reporters at the Capitol that Trump wanted to wait on trying to make a deal for “dreamers” until the Supreme Court had ruled on the Deferred Action for Childhood Arrivals program.”

“Graham was glum afterward about where things stood. (Aferwards) he issued his statement backing a national emergency declaration.”

“At the same time, House Democrats pressed forward with their strategy of passing individual spending bills to reopen portions of the federal government that have been closed in the shutdown.”

“But Trump has made clear he would veto these bills, and McConnell has said repeatedly that he will not bring up any legislation that doesn’t have Trump’s support.”