aside How Do Many GOP Wealthy Feel About Average Americans Earning Under $50,000 Annually?

During the 2012 US presidential elections, the Republican Party candidate Mitt Romney vs. the Democratic Party incumbent President Barack Obama, probably blew his chances to usurp his opponent to become the 45th US president with his infamous words uttered at a fund raiser (attended by very wealthy GOP donors), regarding his views of the 47% of Americans who don’t pay taxes. One of the people present at this event made a recording which captured his comments that went viral. The Democratic Party never did develop any campaign ADs that was more effective in portraying Mitt Romney as one of those entitled rich dudes, who while being a decent enough guy, was absolutely clueless about how the bottom 1/2 of this country lives, that were nearly as damning to his character as his own words. He all but wrote off the votes of half the country.

The reason Mr. Romney’s words on the 47% of Americans who don’t pay taxes, rings true is because he was speaking to a room of very wealthy Americans to where he was parroting their own words back to them. He was affirming their thoughts about the Americans at the bottom 50% rung as far as income goes.

He was empathizing with the same mega rich GOP donors who have been supporting the US presidency of Donald J. Trump.

This same Republican Party member, Mitt Romney from Utah has been elected to the US Senate in the 2018 November elections.

For me, he has been a disappointment as he has been backing President Trump’s 2019 government shutdown over his complaint that the US Congress had not allotted enough monies to construct about 200 miles of his US SW border wall; and the lifting of sanctions against the Russian oligarch Oleg Deripaska, who’s a friend to Russia’s President Vladimir Putin, and the American hobbyist for pro-Kremlin leaders within Ukraine as well as President Trump’s former campaign manager. This last action was a major surprise for me, as he had argued that Russia was a major adversary to US interests during the 2012 debates.

The above actions belies an op-ed piece that he wrote for the Washington Post where had been critical regarding President Trump’s character.

See:  Mitt Romney: The president shapes the public character of the nation …

As per a 12/10/12 MSNBC report,  Romney’s 47% comment named quote of the year by Emma Margolin, “Mitt Romney’s failed bid for president did net him one victory—though not the one he was hoping for.”

“Yale Law School released its seventh annual list of the year’s most notable quotations, and coming in at number 1 is Romney’s infamous 47 percent comment.”

“The former Massachusetts’ governor’s campaign was rocked back in September (2012) when Mother Jones published a secretly recorded video of Romney at a May fundraiser, declaring that 47 percent of the population is made up of people who believe they’re “victims,” and are “dependent on government.”

“Despite his efforts to apologize and insist that he does care about 100 percent of Americans, Romney never fully recovered from his politically disastrous remark. The rest, as they say, is history.”

“Romney also took the Number 2 spot in the list, with his tone-deaf assertion that, as Massachusetts governor, he received “binders full of women” as potential candidates for jobs in his administration. The line became an instant internet sensation.”

For the transcript of Mitt Romney’s 2012 comments, thanks to Mother Jones, see: On the 47 percent

As per a 9/26/18 CNBC report, “In reality, the middle class now makes up just over 50 percent of the total U.S. population, according to a recent report from Pew Research Center, which used 2016 data. That’s compared to 61 percent in 1971.”

“Between 1971 and 2011, the share of adults in the middle class fell by 10 percent — but since 2011, Pew reports, the middle class has remained relatively stable instead of continuing to shrink.”

“Pew notes, the middle class isn’t close to catching up to the wealth of the upper class. In fact, the wealth gap between these two groups is expanding. Nearly 40 percent of survey respondents said that moving from middle- to upper-class is the least likely kind of class mobility that could occur today.”

“Although the wealth of upper-income families has more than recovered from the losses experienced during the Great Recession, the wealth of lower- and middle-income families in 2016 was comparable to 1989 levels,” Pew reports. “Thus, even as the American middle class appears not to be shrinking (for now), it continues to fall further behind upper-income households financially, mirroring the long-running rise in income inequality in the U.S. overall.” 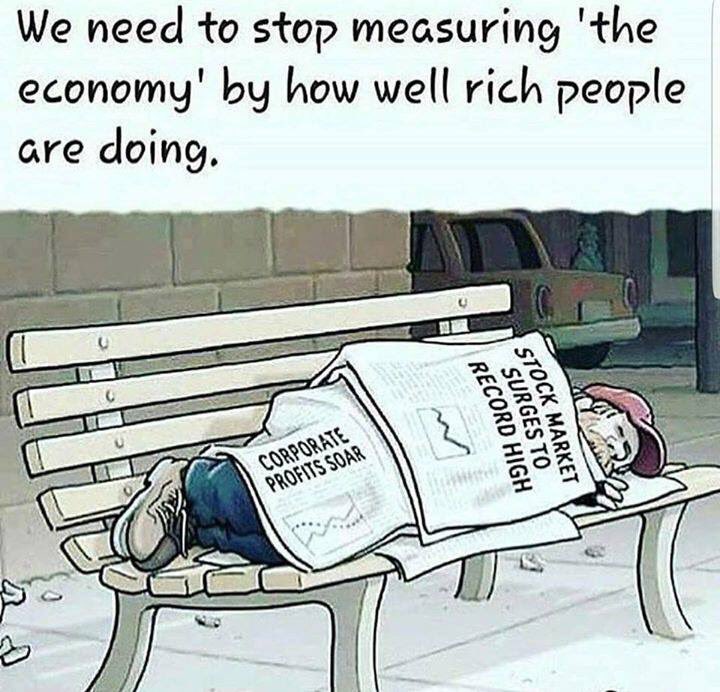