This is an important new story because a reputable Fox TV News journalist Chris Wallace challenged the republican President Donald Trump’s senior adviser on immigration issues, Stephen Miller, about the president’s administration’s recent action of declaring a ‘National Emergency’ in order to obtain added funding of $6.5 trillion dollars for his SW border wall from monies already allocated elsewhere by the US Congress.

Read a sampling of the tweets below.

Chris Wallace is such a prissy twit! Trying to give Stephen Miller a hard time like some snotty teen age girl!

I so dislike the hypocrisy from @FoxNewsSunday and Chris Wallace who NEVER treats the Dems or anyone in the Obama adm like he just treated Steve Miller. Steve Miller you rock! #BuildTheDamnWall @POTUS @realDonaldTrump

Chris Wallace needs to show his guests respect and SHUT HIS MOUTH! It’s NOT about HIM – it’s about our COUNTRY! He’s not in the White House – THANK GOD!

I’m watching FoxNews Sunday! AND THATS ENUF!
CHRIS WALLACE IS A HARDCORE LIBERAL!!!
GET HIM OFF FOX!
He’s no longer a journalist he’s a liberal protectionist!

#chriswallace The Hatred for President Trump and the stupidity about securing the country is obvious on this program.

THAT’S IT FOX. I’M DONE. CHRIS WALLACE AND ANNE COULTER WILL KILL YOUR NETWORK. PAY ATTENTION TO YOUR AUDIENCE.

I tuned in to FOX News Sunday because I wanted to see the annual Rush Limbaugh interview. Chris Wallace is so bad, however, that I had to turn it off and record it so later I can Fast Forward through his libtard babble and only watch the good part. He really is awful!

What he heck would Chris Wallace know about an effective campaign strategy? He’s a Nevertrumper loser.

Chris Wallace , I Apologize To Your Children For Any Part Of DNA That They Carry In Their Souls…

BREAKING:
Stephen Miller is a bad ass
& I’m so glad he is on our side.
Thank you
President @realDonaldTrump for hiring him.

Chris Wallace is nothing but a worm. The only muscles that he has in his body are the ones around the mouth that he has developed by running his mouth and showing his ignorance. The President is trying to save this country from invasion from South of the border. EMERGENCY?  YES!!!

Saw @FoxNewsSunday today, #ChrisWallace tried to peddle #FakeNews by repeating the “fact” that most drugs are caught at ports of entry. What a moron.Catch 10 pounds at ports of entry and miss 10 truck loads at unsecured border crossing and claim all drugs caught were at the port.

Chris Wallace is not the deepest thinker. Welcome to the Stephen Miller School of Woke, Chris. Change your diapers. @FoxNewsSunday

Chris Wallace is an embarrassment to America – he ignores the real issues of murder, drug deaths and sex trafficked kids because he does not like Trump – he joins the huge number of fake news corrupt wannabe “journalists” who will be the poster people of the age of disgusting

I really hate these Liberal fucks on Fox News like Chris Wallace and Marie Harf. I have more respect for people with Down Syndrome than I do Liberals. At least the D.S. people aren’t arrogant and ignorant traitors.

Why is Chris Wallace on Fox is he trying to be fair and unbiased he’s a Democrat, put him on CNN where he belongs

After long and careful consideration, i have concluded Chris Wallace is an ASSHOLE & LIBTURD!!!!!

I bet Chris Wallace in Fox News voted for Hillary

Chris Wallace of Fox News is a LIBERAL HACK just like his dad.

On February 17, 2019, Matt Wilstein of the Daily Beast penned the following report, “Fox News’ Chris Wallace Hammers Stephen Miller: How Is This a ‘National Emergency?’  (“Trump admitted he ‘didn’t need to do this,’ Chris Wallace asked his guest, so ‘how does that justify a national emergency?’)

“The last time Stephen Miller got this heated during a television interview, CNN’s Jake Tapper had to cut him off for “wasting” viewers’ time and the White House adviser reportedly had to be escorted out of the building by security.”

“This time, he was on Fox News, struggling to defend President Donald Trump’s  announcement this week that he would be declaring a national emergency to obtain the funding his border wall with Mexico in a highly contentious sit-down with Fox News Sunday host Chris Wallace.”

“Repeatedly, Wallace tried to get Miller to explain how the supposed “crisis” at the border justifies an emergency order, presenting him with statistics that show how illegal border crossings have dropped dramatically over the past 2 decades and that 80-90 percent of drugs are seized at ports of entry.” 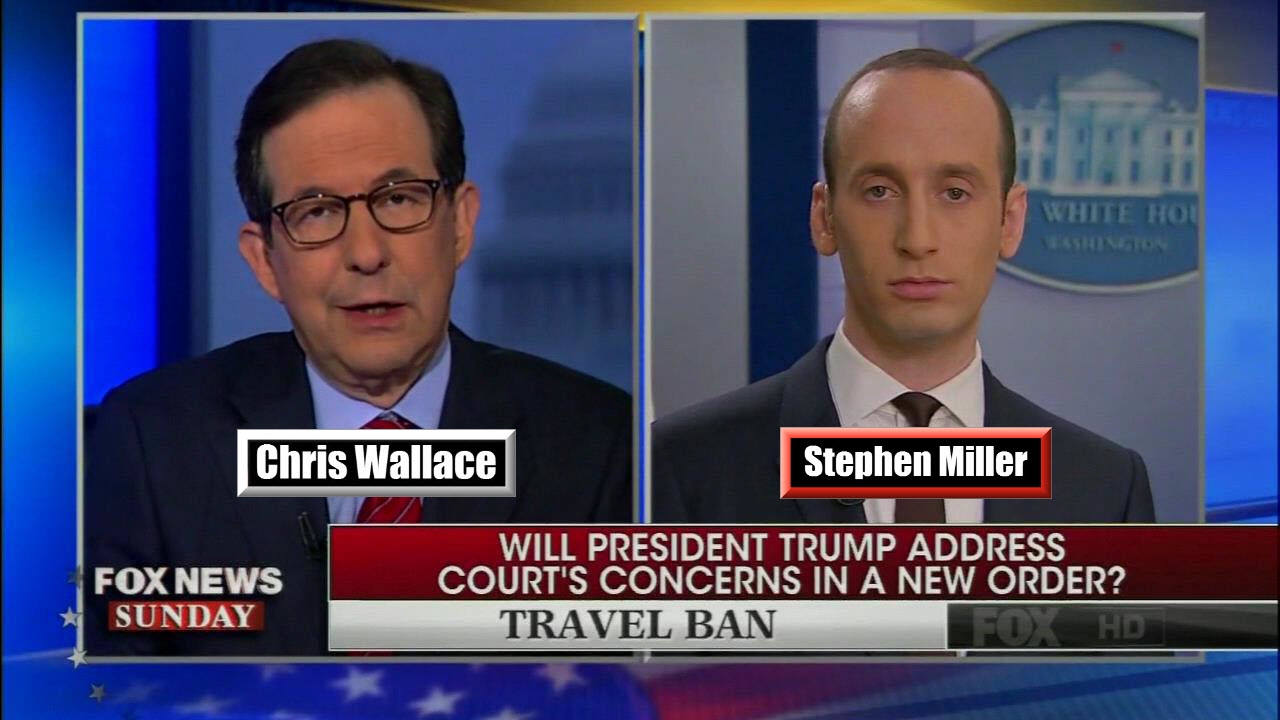 “After playing the clip of Trump admitting to reporters that he “didn’t need to do this,” Wallace asked his guest, “How does that justify a national emergency?”

“What the president was saying was, like past presidents, he could choose to ignore this crisis, choose to ignore this emergency as others have, but that’s not what he’s going to do,” Miller said, before throwing President George W. Bush under the bus. Citing his own statistic that illegal immigration doubled under the 43rd president, he said, “That represented an astonishing betrayal of the American people.”

“When Miller said he could get as granular about the details on this issue as the host wants, Wallace quipped, “Please don’t.” “But the one question Miller could not answer came a little later in their interview. “National emergencies have been declared 59 times since 1976 when the law was passed,” Wallace said, referring to the National Emergencies Act. “Can you point to a single instance when the president asked Congress for money, Congress refused to give him that money and the president then invoked national emergency powers to get the money.”

“As Miller dodged and obfuscated, Wallace kept on him. “Can you find one case?” he asked again.”

“Chris, can you find one foreign threat in the world today, outside this country’s borders, that currently kills more Americans than the threats crossing our Southern border?” Miller asked him in return, apparently referring to either immigrants or drugs, though he intentionally left that distinction unclear.” “You know, the joy of this is I get to ask you questions,” Wallace responded. “And you don’t get to ask me.” When Miller answered his own question in the negative, Wallace added, “Then answer my question! Just yes or no, sir!”

“Miller refused to answer, growing more and more agitated as he railed against the way U.S. money is spent on “some foreign adventure” overseas as opposed to securing the border at home. “If the president can’t defend this country, then he cannot fulfill his constitutional oath of office!” he screamed..”