The World Of White Evangelicals, Part X/ How They Contribute To Increase In Hate In USA

For a disclaimer, as a person of faith, I’m in agreement with very little of the US White Evangelicals’ religious teachings. I’m not an expert of this subject, however, I’m curious as to how the Evangelical thinking is influencing the politics of today. I’ve had to rely on a myriad of sources including my ex-Evangelical daughter to be able to write about this subject.

This is my tenth post in a series delving into the subject of the White Evangelism community in the USA which accounts for over 35% of the president’s base of voters. Its members comprise about 26% of the US population, who self-identify themselves as Evangelicals, and they have voted in 2016 for the republican President Donald Trump by a margin of 80%, plus, they continue to approve of his presidency at rates that exceed 70%. 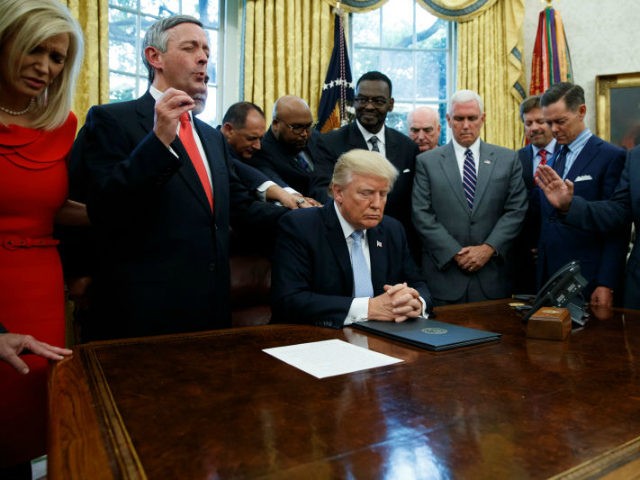 It should be obvious that because they enjoy an out-sized level of influence over President Trump, as they are the largest, most reliable faction within his base of voters, the president would be highly motivated to please them. It doesn’t help that this community is entrenched in the belief that President Trump has been sent by God to represent and champion their causes.

Here’s a write up which describes what some Evangelicals like Pastor Jeffress and Rev. Hagee who were present at the US embassy opening festivities in Jerusalem  feel about their brothers and sisters of different faiths…Then give some thought as to how their displays of prejudices have bolstered some of the president’s polices like the ‘ Muslim travel ban,’ the anti-immigration rules for Central American refugees of color who have been legally seeking asylum at the US SW border, the military transgender ban, etc.

The tale of 2 Evangelical leaders…

The Evangelical Pastor Robert Jeffress of a Dallas TX mega church has been singing the praises of the republican President Donald Trump for his decision around  December 2017 to move the U.S. Embassy to Jerusalem from Tel Aviv, equating it with President Harry Truman’s decision in 1948 to recognize Israel as a state. 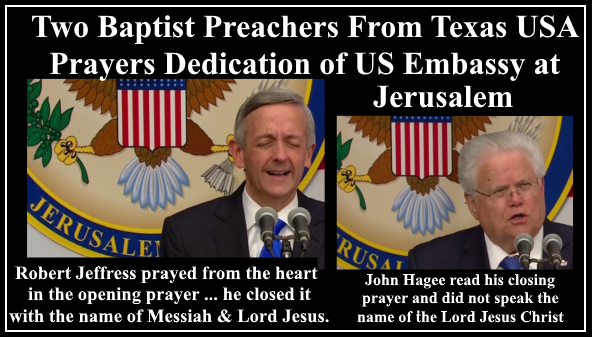 He added, “President Trump is a modern-day profile in courage, accomplishing what no other president has been willing to do.”

On the 14th of May 2018, before Pastor Jeffress led the opening prayers at the new US Embassy in Jerusalem, he told the audience, how Jerusalem has been the object of the affection of both Jews and Christians down through history and the touchstone of prophecy, “but most importantly, God gave Jerusalem — and the rest of the Holy Land — to the Jewish people.”

This belief is central to the end-times Rapture believing Evangelicals where the end times scenario will revolve around the state of Israel being solely in the hands of their Jewish brothers and sisters.

As per a 5/14/2018 CNN report, Another Texas based Evangelical preacher from San Antonio, Pastor John Hagee, the founder of Christians United for Israel, delivered the benediction at the ceremony.

“We thank you, O Lord, for President Donald Trump’s courage in acknowledging to the world a truth that was established 3,000 years ago — that Jerusalem is and always shall be the eternal capital of the Jewish people,” Hagee said.”
“And because of that courage of our President, we gather here today to consecrate the ground upon which the United States Embassy will stand reminding the dictators of the world that America and Israel are forever united,” he added.”

In 1995, President Bill Clinton declared Jerusalem as the capital of Israel but all presidents since then, had resisted political pressures to relocate the US embassy from Tel Aviv to Jerusalem, to encourage both Israel and the Palestinian state to work towards a 2 state solution. But this policy was changed after President Trump took office. 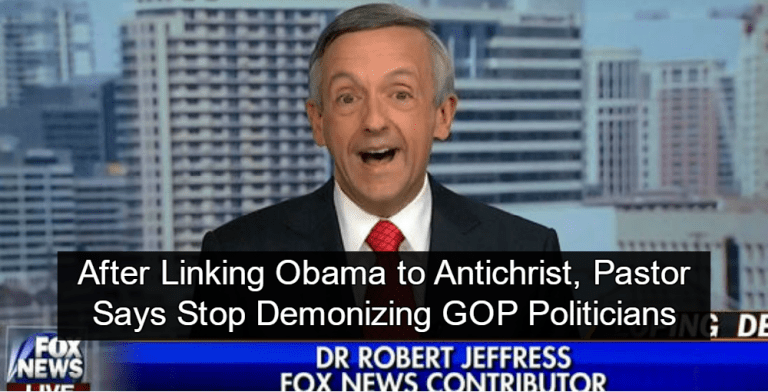 It is important to note that although Evangelicals are convinced that the State of Israel is central to the biblical end-times Apocalypse, some Evangelicals like Pastor Jeffress are not equally enamored of its inhabitants, their Jewish brothers and sisters.

This is why I find it laughable as President Trumps attempts to persuade Jewish Americans to separate from the Democratic Party as he declares that its members hate Israel. The president is not given to understanding nuances. While a significant percentage of Americans are critical of current Israeli policies which make the possibility of there ever being a 2 state solution more unlikely, that does not take away from their affection for the Jewish community and Israel.

In addition, the White Evangelicals’ disdain for other minorities from the LGBTQ to the Muslim communities, contribute to the environment where haters find cover and explains in part, why there has been a significant rise in hate crimes towards all minority groups.

As per a May 14, 2018 New York Times report, “Robert Jeffress, Pastor Who Said Jews Are Going to Hell, Led Prayer at Jerusalem Embassy” by Matthew Haag, “A Dallas evangelical pastor who once said that Jewish people are going to hell and a megachurch televangelist who claimed that Hitler was part of God’s plan to return Jews to Israel both played prominent roles in the opening ceremony of the new American Embassy in Jerusalem.”

“Robert Jeffress, who spoke at President Trump’s private inaugural prayer service and is the pastor of First Baptist Church in Dallas, delivered a prayer at the opening ceremony on Monday, while the Rev. John C. Hagee, a televangelist who founded Christians United for Israel and leads a San Antonio megachurch, gave the closing benediction.”

“Despite their comments about Jewish people, the 2 pastors are among the leading pro-Israel voices in the evangelical Christian world. Evangelicals believe that American foreign policy should support Israel to help fulfill biblical prophecies about the second coming of Christ.”

“The decision by Mr. Trump to move the embassy from Tel Aviv fulfilled a major campaign promise and handed a victory to hard-line pro-Israel Americans, as well as conservative and evangelical Christians who have long wanted the United States’ diplomatic home to be in Jerusalem.”

“But critics say the move, which broke from almost 7 decades of US policy, could risk peace negotiations between Israelis and Palestinians, who both claim Jerusalem as their capital. Mass protests broke out along the border fence with Gaza in the hours before the embassy opening on Monday, and Israeli soldiers shot and killed more than 50 Palestinians, the Health Ministry reported.”

“In their prayers at the ceremony, both pastors praised Mr. Trump. Mr. Jeffress said the president “stands on the right side of you, God, when it comes to Israel.” Mr. Hagee said the new embassy made a clear statement: “Let every Islamic terrorist hear this message: ‘Israel lives.’”

Here are some of the most incendiary remarks they’ve made in the past.”

Jeffress: ‘You can’t be saved being a Jew’

“Mr. Jeffress, who leads one of the largest Southern Baptist churches in the country, suggested in a 2010 interview with the Trinity Broadcasting Network that some churches might shy away from saying “anything that’s going to offend people” to try to grow their congregations. He made it clear he was going to preach what he believes the Bible says.” 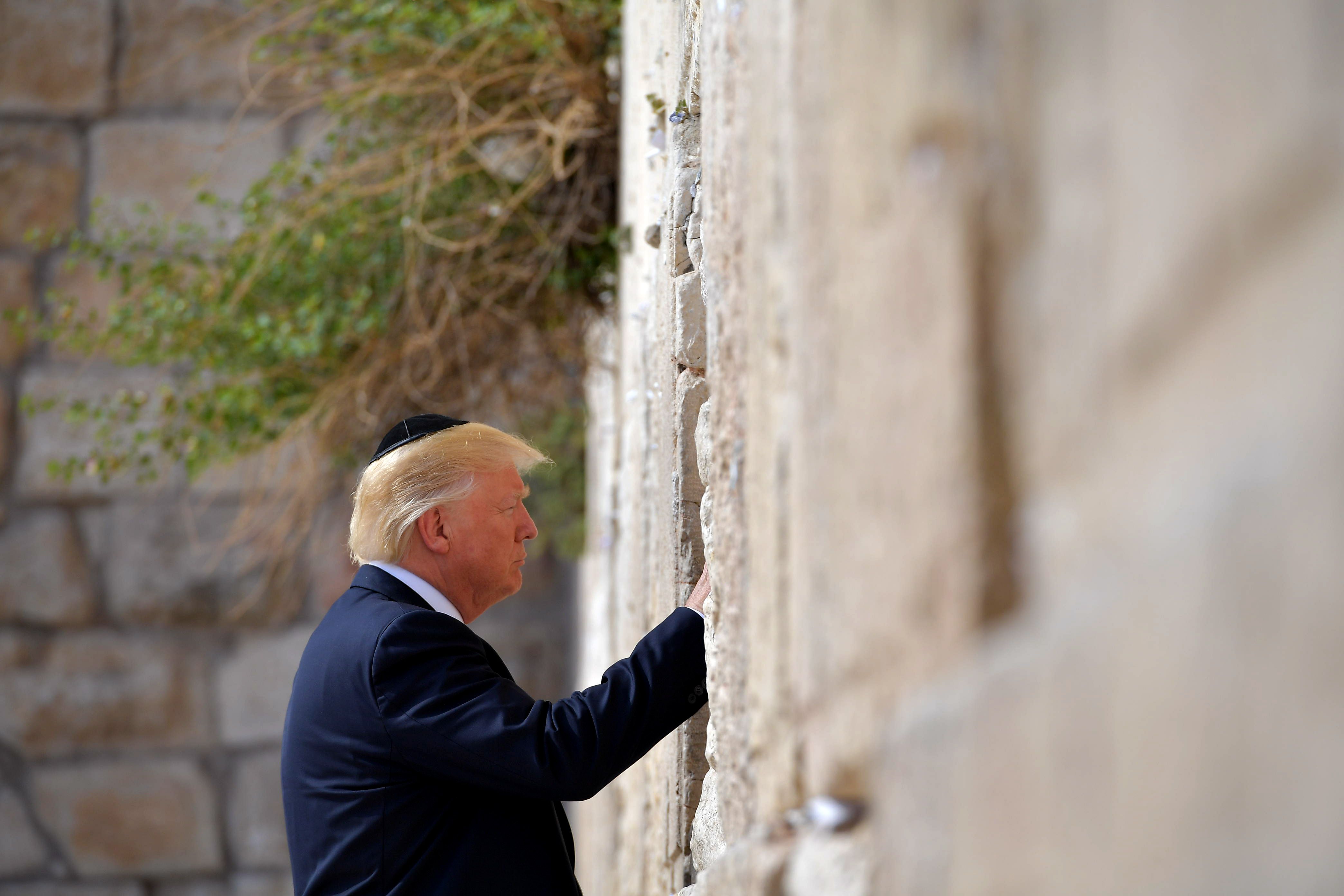 “He added: “Judaism — you can’t be saved being a Jew. You know who said that, by the way? The three greatest Jews in the New Testament: Peter, Paul and Jesus Christ. They all said Judaism won’t do it. It’s faith in Jesus Christ.” (At least Pastor Hagee has explained in interviews, how the Jewish peoples will be saved in the end-times because they’ll come to believe in Jesus Christ when he arrives in all his glory. I’ve not read about what he thinks will happen to those who had previously passed away).

“In the past decade, Mr. Jeffress has assumed a prominent role in conservative politics, appearing frequently on Fox News and urging in sermons and on television to elect a Christian as president. Non-Christian religions are sending their followers to hell, he preached in a September 2008 sermon.”

“Not only do religions like Mormonism, Islam, Judaism, Hinduism — not only do they lead people away from the true God, they lead people to an eternity of separation from God in hell,” Mr. Jeffress said. “Hell is going to be filled with good religious people who have rejected Christ.” 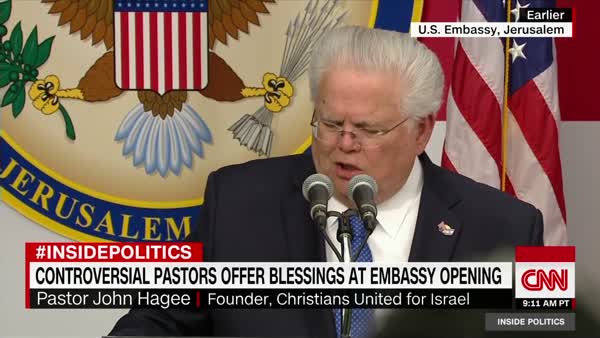 “After Hurricane Katrina struck New Orleans in August 2005, killing more than 1,200 people, Mr. Hagee said that the storm was God’s punishment for its sinful ways, a common trope among conservative evangelists. Those sins included a gay pride parade that was scheduled for the same day that Katrina made landfall”.

“But he had a less sympathetic view of Muslims. “Islam in general, those who live by the Quran have a scriptural mandate to kill Christians and Jews,” he told NPR, adding that about 200 million Muslims wanted to “come to America or invade Israel to crush it.”

Jeffress: Mitt Romney is part of a cult

“Three months before the start of the 2008 Republican presidential primaries in 2008, Mr. Jeffress said in a sermon that the candidate Mitt Romney, a Mormon, was part of a cult”.

“Mitt Romney is a Mormon, and don’t let anybody tell you otherwise,” Mr. Jeffress said in September 2007, according to The Dallas Morning News. “Even though he talks about Jesus as his Lord and savior, he is not a Christian. Mormonism is not Christianity. Mormonism is a cult.”

“After the pastor said on Fox News that he would give the opening prayer at the embassy ceremony, Mr. Romney called him a “religious bigot.”

Robert Jeffress says “you can’t be saved by being a Jew,“ and “Mormonism is a heresy from the pit of hell.” He’s said the same about Islam. Such a religious bigot should not be giving the prayer that opens the United States Embassy in Jerusalem. 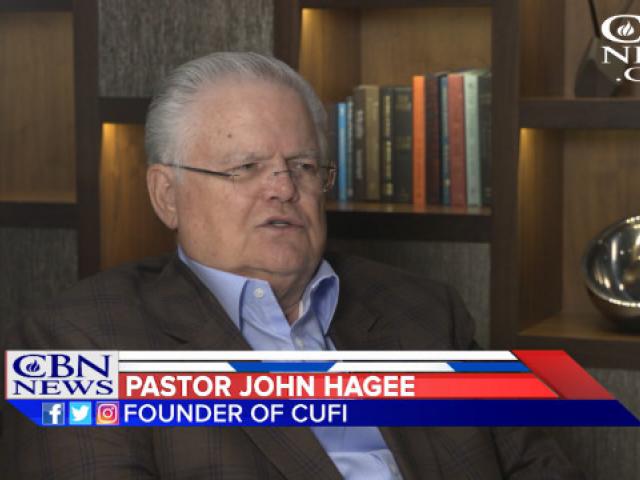 Hagee: Hitler was part of God’s plan for Israel

“(In 2008, Senator John). McCain later disavowed Mr. Hagee’s endorsement after the pastor’s past remarks about Hitler and the Holocaust surfaced.”

“In a sermon in the late 1990s, Mr. Hagee said the Bible made clear that Hitler and the Holocaust — when about 6 million Jews were killed — were part of God’s plan to return Jews to Israel.”

(“But as per the 5/14/ 2018 CNN report, he countered that his words were being misconstrued. “A spokesman for Hagee’s group, Ari Morgenstern, told CNN that the pastor gave the sermon based on the writings of a Jewish theologian, Rabbi Yissachar Shlomo Teichtal. Teichtal, who was imprisoned by the Nazis, wrote that the afflictions that were befalling the Jewish population of Europe during World War II were meant to spur a return by Jews to the Holy Land.”)