Disclaimer: I admire and respect tremendously the Democratic Party House Speaker Nancy Pelosi whose leadership has overall been exemplary and politically savvy. She deserves all the praise and accolades heaped on her.

That doesn’t mean that I’ll follow Speaker Pelosi’s lead when I’m convinced that she’s heading down the wrong path regarding the US House of Representatives commencing an Impeachment Inquiry against the republican President Donald Trump. The impeachment inquiry against President Trump is underpinned by his allegedly having committed numerous felonious acts as enumerated in the 3/22/2019 FBI’s final report regarding its 22 months long Trump-Russia probe, headed by the Special Counsel Robert Mueller III.

Follow @robreiner
“I have the greatest respect for Nancy Pelosi, but she’s positing a false choice in dealing with Trump’s lawlessness. We don’t have to choose between Impeachment & Prison. The preservation of Democracy & The Rule of Law requires both.”

Speaker Pelosi’s numerous changing excuses for pushing the avoidance of the US House commencing an Impeachment Inquiry against a lawless president, mandated by the US Constitution, remind me of how the GOP legislators try on different talking points to figure out how to put lipstick on a ugly idea, like doing away with ‘pre-existing conditions’ coverage in healthcare insurance policies, to fool their constituents.

She has been calling for Democrats to defeat Trump in 2020 and, in the meantime, to press on with the myriad probes/ hearings into his conduct. Her rhetoric has evolved over time, from impeachment not being an option to where, she can’t rule it out as a possibility.

CNN has reported that 76% of Democrats favor the start of an impeachment inquiry.

As per a 6/4/2019 Common Dreams report, “To Hold ‘Lawless President’ to Account, Nearly 30 Groups Urge Pelosi to Start Trump Impeachment Inquiry Now” by Jake Johnson, “Warning that President Donald Trump poses a greater threat to vulnerable communities, the rule of law, and the planet with every day he remains in office, more than two dozen progressive groups on 6/4/2019 urged House Speaker Nancy Pelosi to ditch the “political excuses” and immediately begin impeachment proceedings.”

As of 6/7/2019 and based on the FBI’s Mueller report, over 1000 federal prosecutors on a bi-partisan basis, have signed a declaration explaining to the public, that if Donald Trump were not president, he would have been criminally indicted. There’s a (DOJ) US Department of Justice rule that a sitting president is exempt from being criminally indicted. Because the FBI’s Special Counsel Mueller worked for the DOJ, he was bound by its guidelines. In addition, the head of the DOJ, the Attorney General William Barr who has been upfront in acting as the President Trump’s personal attorney instead of fulfilling his job description of representing the interests of the American peoples, has made it obvious that this judicial arm of the US government can’t be counted on to execute justice regarding President Trump.

See Washington Post report: Trump would have been charged with obstruction were he not President...

This leaves the US House of Representatives as the one government entity empowered by the US Constitution to hold President Trump accountable for all of his felonious acts via the commencement of an impeachment inquiry.

Our founders wrote the US Constitution with the core purpose to prevent tyranny. They did not want this country to be under the thumb of another king. That’s why the US Constitutional framers came up with the idea of distributing power among the president, the legislative body (the US Congress), and the judiciary branch. These three branches were designed to prevent the chances of our great US democracy from being ruled by an authoritarian type leader, such as our current President.

President Trump has been usurping the powers of the other branches as he keeps trampling on the ‘rule of law’ with his flagrant lawless behaviors. Under these circumstances, the US Constitution instructs the House to do its mandated duty by conducting an impeachment inquiry, but the House Speaker Nancy Pelosi has proven to be the one roadblock, stopping the House Democrats from commencing this legal formality. 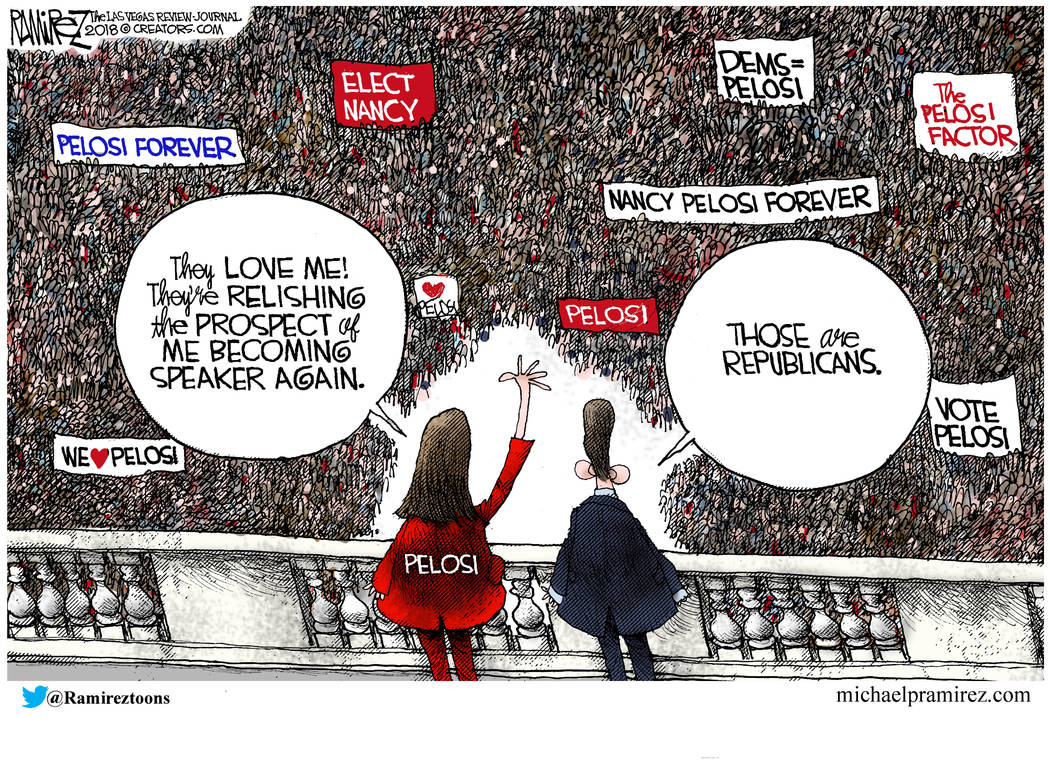 Speaker Pelosi has shared concerns that taking this impeachment step could be politically risky, especially in the upcoming 2020 elections. She doesn’t want to take a chance that those Democrats from Trump-leaning states would lose seats where the House would give up its current Democratic Party majority. Of course, she would lose her leadership position.

But the reverse is also true. If Speaker Pelosi were to announce that she’s directing the House to commence an Impeachment Inquiry against President Trump, I have no doubt that with her current majority — 235 Democrats, 197 Republicans and three current vacancies –she would have enough supporting votes. (She could even allow 17 of her most politically vulnerable congressional members in Trump-leaning districts to take a pass.) 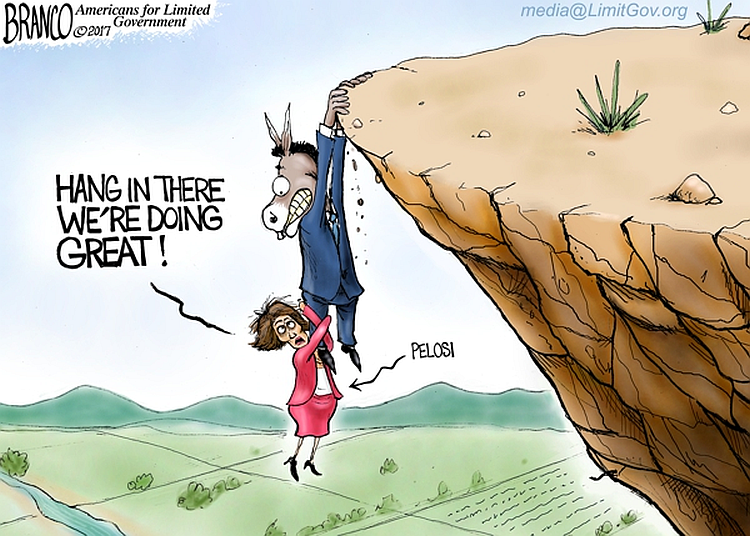 The Speaker Pelosi’s list of reasons of why she’s been avoiding the -I- word, have been bordering on the incredulous…

For example, one of Speaker Pelosi’s earlier demands was that she needed to have over-whelming evidence against President Trump before she’d approve the House starting an impeachment inquiry. But Mr. Mueller had delivered the goods in spades with his final report; however, she could add more evidence of the president’s lawlessness.

Her latest deflection talking point was that President Trump should face prison time, not impeachment. Frankly, the House’s commencement of an impeachment inquiry is not a bar to President Trump also facing criminal charges, once he leaves office.

As per a 6/6/2019 CNN analysis by Chris Cillizza, “It makes sense for Pelosi to throw this sort of rhetorical grenade then, given her current somewhat tenuous position within her own caucus on Trump’s impeachment. But it’s important to understand that this is simply rhetoric from Pelosi — and that any sort of critical analysis makes clear that the likelihood of Trump being impeached based on the current evidence greatly outpaces the chances of him being charged, much less incarcerated, down the line…But between impeachment and imprisonment, the former is the far more viable option. No matter what Pelosi wants.”

The renowned US Constitutional scholar Laurence Tribe responded with the following tweet on 6/5/2019:

As per @tribelaw, “an UNIMPEACHED Trump, if soundly defeated on 11/3/20, could easily resign between 11/4/20 and 1/19/21 so that Pence, as the interim POTUS, could PARDON him. Please start taking into account how the CONSTITUTION works!”

Another one of Speaker Pelosi’s main points against impeachment is the reality that it will never survive in the US Senate. She argues that President Trump wants nothing more than for House Democrats to impeach him, knowing that the Republican-controlled Senate won’t convict him — and then he’ll be able to cast himself as a victim of an out-of-control liberal party come November 2020. For me, this is a bogus objection, as President Trump will always claim the victim card with his base of voters, as this is his shtick.

Remember that historically, the US Senate has never convicted past presidents, but these presidents’ legacies are still marred by the indelible stamp of having been impeached by the House.

Another counterpoint is, that House Democrats have been crafting lots of great laws as a message to the public about what their priorities are, only to have them be DOA in the Senate. Does this GOP Senate graveyard for all bills passed by House Democrats, demonstrate to the public that fighting for the survival of the ‘rule of law,’ performing its constitutionally mandated duty to hold President Trump accountable for his crimes, isn’t a serious consideration?

An easy solution would be for Speaker Pelosi to deliberate on a suggestion by the Constitutional scholar Laurence Tribe, where he details how an impeachment inquiry could be implemented without a transfer to the US Senate. But if somehow the Senate GOP lawmakers end up trying the impeachment case where they all fall down on the job, as they will, Democrats can tell their voters in 2020 to step up to to the ballot boxes to declare their verdicts against President Trump by supporting all  Democratic Party candidates.

See: Impeach Trump. But don’t necessarily try him in the Senate.

Another favorite of Speaker Pelosi’s talking points is that the impeachment process could get in the way of the 2020 election season Democratic Party candidates’ ability to focus on issues that lift up the lives of their voters like improving access to healthcare. She’s a firm believer that this focus on issues is the main reason why Democrats had huge ‘Blue Wave’ election victories in November 2018.

But Speaker Pelosi is missing the bigger picture. Remember that as of right now, 76% of Democrats favor impeachment. In the 2018 midterm elections, Democratic Party candidates won bigly due to record voter turnout rates over 2016. This 2018 record voter turnout was probably the most crucial factor that accounted for the Democrats taking over the majority of seats in the House. In short, Democrats didn’t win just because their candidates focused on issues like healthcare.

Speaker Pelosi’s has many more arguments for avoiding the -I-word, but when studied through a critical lens, these talking points are falling flat. When she’s successfully challenged on her thinking, she just tries on another talking point or deflection tactic.

Thus, House Speaker Pelosi may be right in her thinking, that the -I- word is to be avoided at all costs as it portends too many political minefields, but being right isn’t everything, not if Democratic voters become too disheartened to where there’s a repeat of 2016 depressed voter turnout numbers with its corresponding losses vs the 2018 wins. In other words, it may be politically risky for her to take the Democratic Party base of voters, for granted. 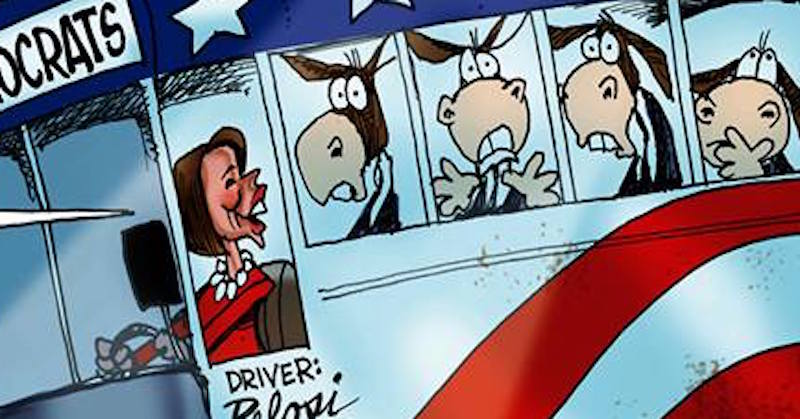 It has been leaked to news media that the House Judiciary Committee Chairman Rep. Jerry Nadler has been promoting the benefits of commencing an impeachment inquiry against President Trump but so far, Speaker Pelosi rules the day..

In conclusion, if House Democrats are convinced  that President Trump is indeed guilty for having committed impeachable acts, or like Speaker Pelosi says, “he belongs in prison,” then they all have a duty to launch an impeachment inquiry, end of story.

As per 4/20/2019 Lawfare post, “In the face of this (FBI Mueller report) evidence, for Congress to not even consider impeachment as a matter of serious inquiry is to declare that the legislature is not interested in carrying out its institutional obligations as a coordinate branch of government.”