Before I read the 3/22/2019 FBI’s final report of its 22 months long Trump-Russia probe, led by the Special Counsel Robert Mueller III, which details the republican President Donald Trump’s numerous felonious acts, I was supportive of the Democratic Party House Speaker Nancy Pelosi’s cautious approach towards commencing an “impeachment Inquiry” against the president.

Now that I’ve read and studied the FBI’s Mueller report, I’ve become a strong advocate towards the US House of Representatives commencing an impeachment inquiry against our lawless president who tramples on the ‘rule of law’ each and every day, as directed by the US Constitution. 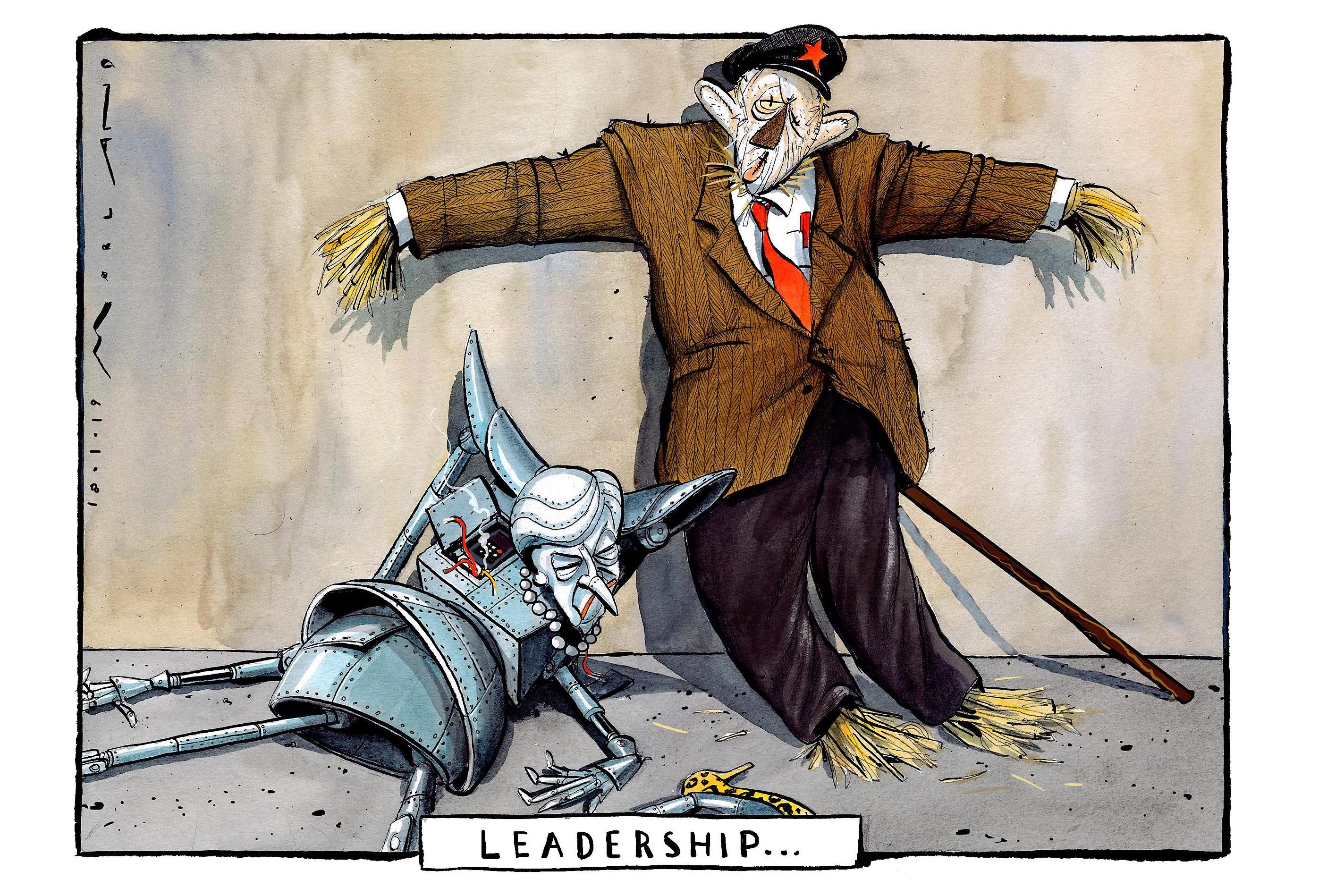 In the long run, the political cost of the House failing to do its solemn duty of commencing an impeachment inquiry against a lawless president, will be much more costly than if they just had the courage to do the right thing.

The following write-up reflects my thinking…

“At one point, House Speaker Nancy Pelosi’s reluctance to pursue impeachment could certainly be defended as both politically and constitutionally prudent, even if President Trump had clearly committed impeachable offenses. Waiting for Robert Mueller’s final report (even in redacted form) before moving forward was a defensible, deliberative position.”

“But that time is gone, and Pelosi’s position no longer makes any coherent sense. “Trump deserves impeachment — so let’s defeat him at the ballot box” is not a sound argument, especially from an institutionalist perspective. There’s also no guarantee it will work, as Adam Jentleson, former chief deputy to Sen. Harry Reid, points out at GQ: Remember how Democrats cleverly chose not to fight for Merrick Garland’s Supreme Court nomination, relying on defeating Trump in 2016 instead?”

“The political downside of refusing to impeach is potentially far greater than the downside of impeachment itself.”

“There are more immediate downside costs as well, as Jentleson’s bluntly-titled GQ article, “The Political Costs of Not Impeaching Trump” reminds us. “Being in the minority limited our options for overcoming McConnell’s blockade” of the Garland nomination, Jentleson writes. “But whenever we started to contemplate more aggressive tactics, they were dismissed on the theory that the upcoming election would sort everything out. Why rock the boat, we told ourselves.”

“In other words, Trump was far behind Hillary Clinton in the polls, so why bother fighting McConnell? Democrats would surely get their Supreme Court nominee eventually. We know how that worked out: And the course of history was altered forever.” That could happen again, Jentleson argues:”

“The decision not to impeach is not a decision to focus on other things, it is a decision to cede power, control, and legitimacy to Trump. Trump is not a master chess player, he just bluffs his opponents into forfeiting their moves — and that is exactly what he is doing to House Democrats.”

“Ignoring this downside is the fundamental mistake on which everything else is premised, but it’s hardly the only one. There are at least 10 other things that Pelosi and others get wrong about impeachment. Correcting those mistakes can go a long way toward clearing the air.”

“Most important, Pelosi believes that the American people don’t support impeachment, and that pursuing it will prove disastrous for Democrats. She’s focused on the downside of impeaching, while ignoring the downside of not doing so.

“This is clearly her overriding concern, and it’s fundamentally mistaken. But it can’t be tackled alone. We need to consider the whole constellation of misperceptions that surround that one and help reinforce it. These can be broken down into six false arguments against moving forward with impeachment and four arguments that are being ignored.”

“Of those six false arguments, Pelosi managed to squeeze half of them into a the space of just a few sentences a month ago: 1) Trump wants impeachment, and is deliberately luring Democrats into it; 2) Impeachment will divide the nation, and 3) We don’t have enough facts to know whether impeachment is warranted.”

“There’s a superficial plausibility to all three claims, so it’s important to realize how wrong they are, and why. Trump loves to goad people, no question. If Democrats were to impeach him, he’d certainly use it to rile up his base, playing the victim card to the hilt. These undeniable facts are just pieces of the whole claim Pelosi advances. But when looked at as a whole, their plausibility quickly starts to crumble.”

“This part of Pelosi’s claim was immediately challenged on Twitter, Although she has continued to express this view, right through her appearance with Jimmy Kimmel last week. It’s plausible primarily because constant battles with “liberal” foes is one thing Trump  has delivered for his base. After Trump blew up the infrastructure talks, the AP went so far as to report Pelosi’s charge as a background fact: “Trump has been betting the future of his presidency on trying to goad Democrats into impeaching him …”

“Pelosi’s questionable claim was quickly becoming conventional wisdom, but the very next day, the Washington Post’s Aaron Blake offered a more straightforward explanation for Trump’s explosive reaction: “Trump really doesn’t want people digging into his finances and potentially obstructive actions, and he’s willing to do just about anything to try to stop them.” Given Trump’s decades-long history of obsessive secrecy and legal stonewalling, this explanation has a great deal going for it.”

“Last week, Trump vividly showed the world just how wrong Pelosi’s claim really was. After Mueller broke his silence with a brief public statement at the Justice Department, there was a sharp uptick in calls for Trump’s impeachment. If the president wanted to goad Democrats into taking the plunge, it would have been the perfect moment. Instead, he did the exact opposite — changing the subject completely, as Elaina Plott noted at the Atlantic.”

“Whenever a negative story comes around, his instinct is to pivot to immigration or trade,” a senior campaign adviser told her. That’s exactly how Trump responded, with a new announcement of immigration-linked tariffs on Mexican imports.”

So it should now be clear to everyone that Trump is not trying to bait Democrats into impeaching him. Rather, as he said himself, he sees impeachment as “a dirty, filthy disgusting word.” As Heather Digby Parton argued here at Salon last week, “The last thing he wants is to be like O.J. [Simpson], a man acquitted by a biased jury, walking around in a world in which almost everybody knows he’s guilty.”

“Pelosi’s claim that “it would be very divisive in the country” can only be considered a bad joke. The country is already divided, perhaps to an extent not seen since the Civil War. The question isn’t whether Democrats are going to divide the public, but whether they’re going to inform and educate it, to the extent that is possible. Trump’s base, which is too small to re-elect him on its own, doesn’t need solidifying. In fact, as the recent town hall held by Rep. Justin Amash, R-Mich., made clear, Trump’s base has been shielded from any knowledge of the Mueller report.”

“I was surprised to hear there was anything negative in the Mueller report at all about President Trump. I hadn’t heard that before,” one Trump-supporter said. “I’ve mainly listened to conservative news and I hadn’t heard anything negative about that report and President Trump has been exonerated.” Impeachment hearings will only erode the support of people like this.”

“On the other hand, it’s Democrats who need to solidify their base by not demoralizing them all over again. This is a difficult task for the Democratic Party because of its coalitional nature, as described by Matt Grossmann and David Hopkins in “Asymmetric Politics: Ideological Republicans and Group Interest Democrats” (Salon review here.) But the facts are overwhelmingly on their side, which leads us to Pelosi’s third mistaken claim.”

“Pelosi’s third claim was expertly presented as common sense: “We can’t impeach him for political reasons. And we can’t not impeach him for political reasons. We have to see where the facts take us.” OK, that sounds reasonable — except that we already have more than enough facts to warrant impeachment. We even have enough to warrant criminal indictments. As the recent statement signed by hundreds of former federal prosecutors  states, “The Mueller report describes several acts that satisfy all of the elements for an obstruction charge.”

“In fact, there are whole slew of other impeachable offenses Trump has committed, as Lawfare managing editor Quinta Jurecic wrote recently at the Atlantic. Those include the pardon of Joe Arpaio, Trump’s instructions to Border Patrol officers to disobey the courts in turning back asylum seekers, his  demand that the Postal Service double Amazon’s shipping rates and multiple abuses of power, that speak to the “democratic backsliding” described by Huq.  Expanding impeachment hearings to cover these abuses would allow Democrats to drive home the sweeping nature of Trump’s attempted power grabs and how far they depart from established American norms and traditions. It’s not facts that are lacking here. It’s backbone. It’s political will.”

“This argument is premised on a number of false assumptions: That impeachment will necessarily be seen as partisan; that public opinion won’t change in response to new information; that everyone who voted for Trump in a swing district is part of Trump’s base; that voters will punish a principled stand, rather than respect it (see, for example, the standing ovation Amash received at his recent town hall); and that members of Congress can’t articulate fact-based, nonpartisan arguments for impeachment, just to name some of the most obvious ones.”

“We’ve already seen initial evidence, both from Amash and from a few swing-district Democrats, indicating that all these assumptions are questionable at best. “We were getting about 2 to 1 in terms of the number of calls opposing impeachment and telling us to stop the investigation,” Rep. Katie Hill, D-Calif., told Chris Hayes last week. “Now we’re getting three or four to one saying, we need to be moving forward. This is getting too out of hand.” Hill is a self-described moderate who narrowly defeated Republican incumbent Steve Knight last fall.”

“Another newly-elected California Democrat, Rep. Katie Porter — who unseated GOP incumbent Mimi Walters in an Orange County district Democrats had never won — said she had seen “a real turning point” at her town hall, NBC reported. “Porter told voters here that while she didn’t run for office to impeach the president and never mentioned it on the campaign trail, ‘I will not shirk my duties if the time comes.’”

Democrats must certainly conduct a careful deliberative process along the lines of the Watergate hearings, as one participant in that process, former Rep. Elizabeth Holtzman, has argued. “Rather than dividing the country, the impeachment process brought it together — most Americans agreed that more important than any president or party were the rule of law and the Constitution,” Holtzman writes. “Nixon was permanently disgraced — and the Committee’s work has never seriously been challenged.”