Dear Charlie Sykes, I Think You’re Great But Dems Don’t Want Your Advice To Be More Like GOP 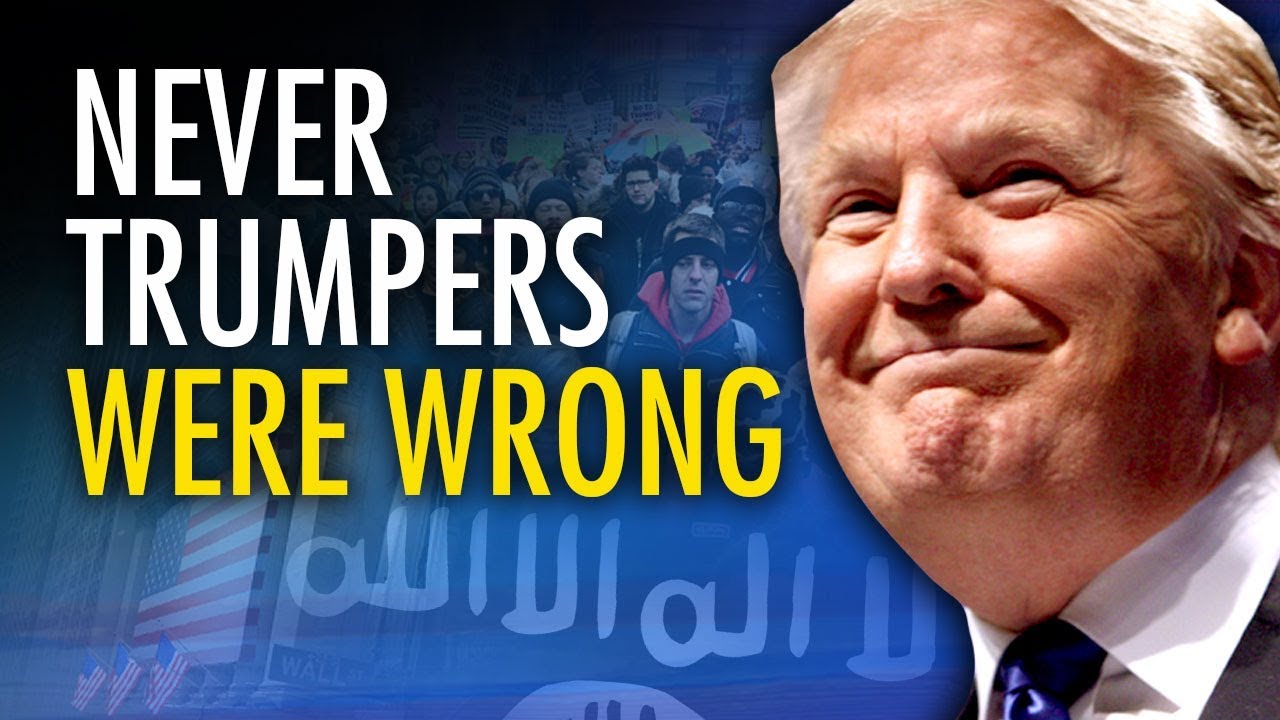 I like to read opinions from the left to the right. Recently, I’ve noticed panic levels setting in, by recent ex-GOP and current GOP members who are “Never Trumpers” as they act out in an attempt to school the Democrats on who they should should select as their presidential candidate and how they should act to make them feel more welcome, As an ex-GOP member myself until 2016, I know that I can’t walk into someone else’s turf  and proceed to tell them how they should conduct their business.

That being said, I’m thrilled  and am thankful that the “Never Trumpers” will support non-GOP candidates in the upcoming 2020 elections, so that “We the People” can claim back our US democracy where normalcy is restored regarding basic principles like respecting the value of truth, the rule of law. the US free press; an independent judicial system and election security, for starters.

Dear Never Trumpers, Here’s the good news. The vast majority of Democrats have as their #1 goal, a candidate who can beat President Donald Trump, hands down. So relax a little.

Here’ are some examples of what I’m describing:

There are millions of swing voters who regard Trump as an abomination but might vote for him again if they think you are scarier, more extreme, dangerous, or just annoyingly out of touch. And, you have some experience at this, don’t you?

Dear Democrats: Here are 11 ways you can blow this election:

1. Hold firmly to the idea that Twitter is the beating heart of the real Democratic Party.

3. Keep promising lots of free stuff and don’t sweat paying for it.

Charlie Sykes‏Verified account@SykesCharlie
Following @SykesCharlie
4. Go ahead and abolish private health insurance.
6:14 AM – 25 Jun 2019
On an aside, I’m shocked at the ugly comments that the “Never Trumpers” garner from the left to the right. I can’t say which extreme is worse. It’s time both sides practice some good manners. No one will ever influence anyone to look at things from a different perspective by first, demeaning that person as a human being.

Here’s just a couple of my replies to Charlie Sykes via Twitter:
“Dear @SykesCharlie , The Dems did craft Obamacare with assistance from GOP colleagues even though they all voted against it. If GOP had even 1x in 9 yrs tried to help fix it instead of sabotaging it whenever possible, I’d buy your pt…”
Replying to @SykesCharlie

“I’m sorry. But is this a joke? We’re talking about GOP under Trump + Bush admin who spent monies like drunken sailors as they gave mostly rich folks, tax cuts + soaring debt. Deficit nmbrs are outrageous. “

On March 11, 2019, Neil H. Buchanan of Verdict.Justia penned the following report which reflects my thinking, “The Purest False Equivalence of All: By Attacking Democrats on Substance, NeverTrumpers Destroy the Process”

“I argued in a recent Verdict column that Donald Trump and the Republicans are wrongly trying to save their political hides by distorting the word “socialism” to scare self-described moderate voters into rejecting the Democrats. This is hardly a new political strategy, with red-baiting tactics being a staple on the right at least since the Great Depression. To note only the most obvious examples, the now-wildly-popular Social Security and Medicare programs, to say nothing of the idea that rich people should pay a higher proportion of their income in taxes, were vociferously denounced as creeping socialism (and worse) when they were enacted.”

“But given that Republicans have nothing to offer that would actually improve most people’s lives, they have no choice but to create imaginary bogeymen and distort what Democrats are saying. “The US will turn into Venezuela soon!” 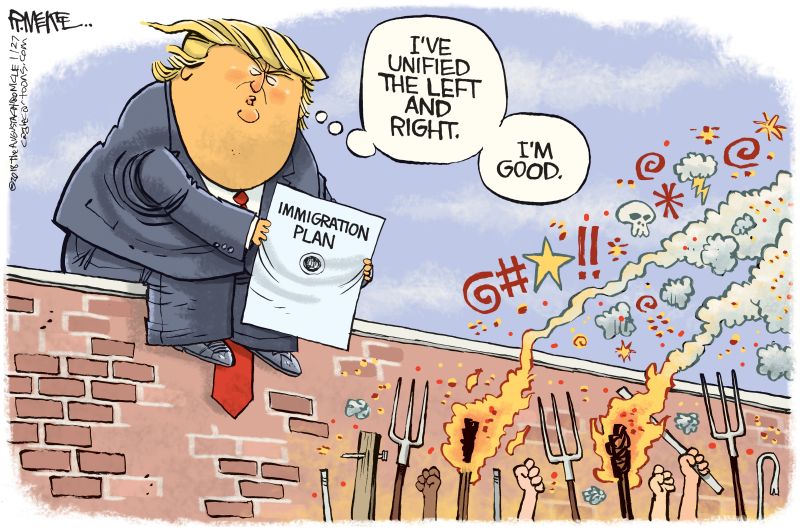 “Whether or not the Trump/Republican strategy works to scare enough voters—and not forgetting the ongoing Republican efforts to suppress the votes of younger and poorer people—the fact is that Democrats, even the more liberal Democrats who call themselves democratic socialists, are anything but immoderate. On the substance of what various Democratic presidential candidates and party leaders have announced, the party is solidly in the mainstream of American thought.”

“Yes, there are differences among Democrats about strategy and timing, with some saying that the health-care system should not be changed too quickly. If the Republicans are hanging their hopes of saving the wasteful and cruel (but highly profitable for Republican donors) US health care system on regular people’s love of their health insurance policies, however, they are surely grasping at straws. People do want to be able to choose their doctors, but how many times has anyone said, “I love my UnitedHealthcare PPO plan, and you can’t take that away”?

Moreover, Democrats’ supposedly extreme tax and spending policies are not only popular but draw from very recent American experience, as I will discuss below. The American public likes what Democrats are selling, both because it seems normal and right to reject gross inequality and because Democrats’ methods are simply so familiar.

“Beyond the substance of the Democrats actual proposals, however, some anti-Trump conservative pundits are having heart palpitations because Democrats are supposedly throwing away the 2020 election by having gone too far to the left. As I argued in a follow-up column, that claim has nothing to do with the substance of what Democrats are doing and everything to do with the desire of those conservative pundits to “have it all.” They want to get rid of Trump, but they also want to keep all of the (again, wholly unpopular) conservative policies that Democrats reject.”

This strategy of accusing Democrats of extremism as a mirror of Republicans’ extremism does, unfortunately, seem to be working its way into people’s consciousness. Just as one example, I recently had a conversation with an American professor who is a renowned expert on the science of climate change, and we were joined by a British history professor. Neither of them had anything good to say about Trump, which is no surprise from people who care about the things that Republicans are destroying. I was surprised, however, when the Brit asked whether today’s Democratic Party still includes any moderates, and the American replied: “No, they’ve all gone to the extreme left.” The Brit then said, “Yes, that’s what I heard.”

“Again, anyone who looks at the actual policies that these supposedly extreme Democrats are proposing will be hard-pressed to find anything immoderate (much less terrifying). The Democrats have, instead, in large measure simply given up at long last on their decades-long strategy of trying to find common ground with mythical “reasonable Republicans,” a strategy that allowed the Republicans to continue to move to the right while supposedly “pragmatic” Democrats chased them with ever more concessions.”

“But this recent move to the left by Democrats actually amounts to a statistical adjustment. That is, the average Democrat is now more liberal than five or ten years ago, but they have essentially clustered around a very popular and genuinely moderate set of views and policies—reasonable gun control measures, ending Republicans’ regressive tax giveaways, admitting that climate change is real, addressing the college debt crisis, and so on—that have their roots in policies that have worked in America in the past and can work again.”

“If the Democrats actually are not extreme, however, why are even some people outside of the Trumpist cult willing to believe that they have gone off the rails? ”

“On substance, they reject Democrats for advocating policies that are “too far left” only in the sense that they are to the left of these pundits’ own preferences.”

“Those policy decisions, starting with the Reagan presidency and carried forward to this day, have made people’s working lives miserable and uncertain, exacerbated sexism and racism, and created inequality that rivals the Gilded Age that preceded the Great Depression (which nearly destroyed capitalism).”

“By contrast, it is on matters of process, not substance, that the anti-Trump right actually has a good point to make. Understanding the difference is crucial to seeing where the true stakes are in the current moment.” 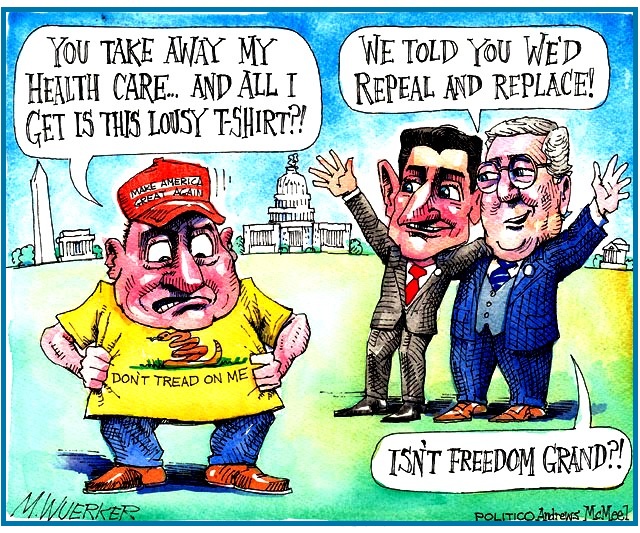 A Very Different Kind of False Equivalence: Substance and Process

“(Never Trumpers) thus resort to saying that Democrats are being immoderate, but that is merely because they know that the label “moderate” sounds good to Americans’ ears.”

“That is standard-issue political rhetoric, of course, but what makes the current situation different is that these same pundits (as well as, I must emphasize, many supposedly neutral news reporters and headline writers, who have mindlessly adopted the “too far left” trope) want to scold Democrats for being at fault for making it more likely that Trump could win next year. Their lament, in essence is: “How can you Democrats adopt policy positions that I personally don’t like, making it harder for me to support you? Don’t you know how important it is for Trump to lose?”

“What matters for the future is that the American political system survives the Trumpian onslaught.”

Process Is (Almost) Everything

“Interestingly, when legal scholars discuss process versus substance, it is typical to treat the substance as the more important part of the discussion. “Mere” process questions seem to stand in the way getting to what truly matters. Death penalty litigation, for example, is littered with process hurdles that can prevent meritorious substantive claims from being heard.

Donald Trump’s invocation of emergency powers is wrong on the merits, and it’s worrying that courts might invoke process hurdles (such as justiciability) to avoid reaching the substance of what’s wrong. Interestingly, however, in that case the substance is itself a higher goal of process, which is preservation of the separation of powers.”

In American politics today, the standard situation (where substance dominates process) is reversed. Reasonable people can disagree on the substance of various public policies, but it’s more important than ever that they agree to maintain the integrity of the US Constitution’s political processes.

The Democratic Party might not currently be offering everyone their precise mix of desired policies (although, if one believes the polling data, the Democrats’ current positions command clear majorities on every issue), but that can be remedied by a robust political system with true accountability and fair elections.

Being wrong on substance is a shame, but being wrong on process is a catastrophe. We must stop confusing the two.