Why Russia Has Focused Its Sights On Crimea (Ukraine) And Syria

There’s good reason as to why Russia has been fixated on Crimea in Ukraine and Tartus, Syria.

Russia’s President Vladimir Putin has this problem. He requires a naval base located on warm Mediterranean type waters for military strategic reasons. There’s one Russian Naval base in ( (Sevastopol) Crimea, Ukraine and another one in Tartus, Syria, where both meet this military strategic requirement.

Note: The Russian naval base in the Crimean area( (Sevastopol) has been leased from Ukraine since 1997 with an expiration date in 2010 which has been extended to 2042. Prior to Russia’s 2014 invasion into Ukrainian area, Ukraine had made it known that it didn’t want to extend this lease beyond 2042. Until the dissolution of the Soviet Union in 1991, Ukraine had been a country under the leadership of Russia.

But in 2014, the Ukrainians ousted their pro-Russian President Viktor Yanukovych who had won the 2010 election that had been directed by President Trump’s former campaign  manager, Paul Manafort. President Yanukovych had promised that he would work towards having Ukraine become part of the European Union and NATO, but instead he was endeavoring behind the scene to unite Ukraine with Russia.

After the ouster of  the pro-Russian president in 2014, Russia stepped in to invade Ukraine with no provocation, and then its president announced to the world that he was annexing parts of Ukraine, which included Crimea. The international community reacted by taking steps to impose serious economic sanctions against Russia for its illegal action, as per international law. Then the G8 consisting of countries with vibrant democracies kicked out Russia to become the G7. Ever since, President Putin has been trying to figure out a way to have those sanctions lifted and to be accepted back into the fold of the G8, while still maintaining a hold on Crimea, but he hasn’t succeeded to date.

It was in 2015, when Russia decided to finagle and muscle its way into acquiring control in the Syrian area with his ally, the Syrian dictator Bashar-al-Assad, even with the US presence. Ever since, Russia has wanted the USA out of Syria. In 2017, Russia signed a deal with President Assad to maintain a naval base in Tartus, Syria for years into the future.

Russia’s President Putin was determined to insure that Russia had its naval base, located in warm waters, one way or another. With Russia’s naval base in Crimea being iffy, President Putin needed the one in Syria. Since 2015, he has been maneuvering to acquire greater control over this region and thus, it became his goal to push the US military out of the picture. With the inadvertent help by the republican US President Donald Trump in 2019, he has succeeded in this objective.

As per the March 7, 2014 Guardian report, “Ukraine crisis: why Russia sees Crimea as its naval stronghold” by Alan Yuhas and Raya Jalabi:

Why does Russia have a naval base in Crimea?

• Geographic limitations and ambitions: Russia’s capacity to reach the sea is limited by geography, so ports in the north and south seas, leading to larger waters, are crucial.

As the map below illustrates, Sevastopol is a strategically important base for Russia’s naval fleet, in addition to being Russia’s only warm water base. After the dissolution of the Soviet Union, a 1997 treaty with Ukraine allowed Russia to keep its Black Sea Fleet pretty much intact (with 15,000 personnel currently stationed) and lease the base at Sevastopol (extended to expire in 2042).

Crimea was bound to be the focus of the Russian backlash against the Ukrainian revolution. … For more than 20 years, ever since the collapse of the Soviet Union, its rule by Kiev has been a major source of Russian resentment – inside and outside Crimea – and a major thorn in Ukraine’s relations with Russia.

The Treaty of Friendship and Co-operation – by which Russia rents its naval base at Sevastopol from the Ukrainian government – is so far-reaching in the rights it gives the Russians to exercise their military powers that it is seen by many in Ukraine to undermine the country’s independence. In 2008 the Ukrainians said they would not renew the lease when it expired in 2017. But they buckled under the pressure of a gas-price hike and, in 2010, extended the Russian navy’s lease until 2042.

• Projecting power: Sevastopol has been an important hub to project Russia’s naval power on a global platform. The Black Sea Fleet has seen a flurry of activity since 2008: during the war with Georgia that year, the fleet staged blockades in the Black Sea. The Russian navy was actively engaged with Vietnam, Syria and Venezuela (and up until March 2011, Libya) “for logistics and repair services in their principal ports“. It has also been alleged that Sevastopol has served as the main source in supplying the Assad regime during Syria’s civil war and proved useful with Russia’s role in dismantling Syria’s chemical weapons last year. After Syria’s civil war forced Russia to stop using its naval base in the Syrian port of Tartus last year, Sevastopol became even more crucial.

A brief history of Crimea and Crimean Tatars

• Before Tsarist subsumption: For five hundred years – roughly the middle ages in Europe – Turkic and Tatar tribes traded rule of Crimea. The peninsula spent a few hundred years as a Muslim Khanate and then an Ottoman vassal state, until Russia annexed it in 1783, under Catherine the Great, who thought the region symbolized Russia’s links to antiquity. (She proceeded to parcel out land to aristocrats and build classical-style palaces and gardens.)

By 1900, the Crimean Tatars, once the majority, had been halved by wars and campaigns of Russification. Their population was halved again in 1917, and shortly after that, Stalin forcibly deported most of the remaining Tatars to central Asia. Unsurprisingly, Tatars have largely held fiercely anti-Russian sentiments for a very long time. Since the collapse of the Soviet Union, Tatars have been returning, and though they number upwards of 200,000, they’re still a minority.” 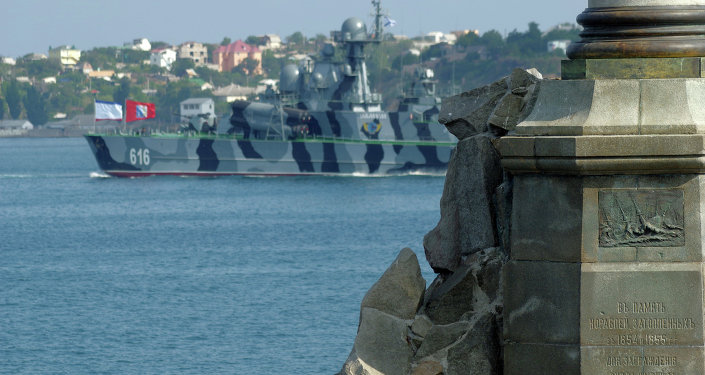 • Crimean War: With its Black Sea fleet based in Sevastopol, Tsar Nicholas I knocked the Ottoman Empire out of the region – a hugely symbolic feat considering Russia’s tricky relationship with its Muslim population and its centuries in need of a fleet.

• Khrushchev to Yeltsin: Crimea was given to Ukraine by premier Nikita Khrushchev (himself born at the border with Ukraine) to mark the 300th anniversary of Ukraine’s inclusion in the Russian Empire, a “donation” many in Russia still see as illegitimate. Surprisingly, Boris Yeltsin, the first president of post-Soviet Russia, didn’t propose an acquisition of Crimea during negotiations to dissolve the Soviet Republics. On September 26, 2019, the Navy Times published an AP report, “Naval base in Syria anchors Russia to Mediterranean” byYuras Karmanau:

A Russian submarine has moored at Russia’s base in Syria after a patrol mission while another one is getting ready to sail off after replenishing supplies — the rotation that underlines Moscow’s growing military foothold in the Mediterranean region.

The naval base in Tartus is the only such facility Russia has outside the former Soviet Union. In 2017, Moscow struck a deal with Syrian President Bashar Assad to extend its lease on Tartus for 49 years. The agreement allows Russia to keep up to 11 warships there, including nuclear-powered ones.

Russia has waged a military campaign in Syria since September 2015, allowing Assad’s government to reclaim control over most of the country following a devastating civil war.

An air base in the nearby province of Latakia has been the main hub for the Russian military campaign, while the commercial ports in Latakia and Tartus have served as top supply hubs, handling ships with fuel and military equipment in a massive supply effort dubbed the “Syrian Express.”

As part of its efforts to restore the Soviet-era practice of keeping warships on a permanent vigil in the Mediterranean, Russia has moved to modernize and expand the naval facility in Tartus.

Capt. Sergei Tronev, the chief of the Russian navy command in the area, said in addition to 2 submarines moored at the harbor, Tartus now also hosts 2 missile corvettes, 3 patrol boats and 3 supply vessels.

Tronev added that along with the ships in Tartus, the navy’s force in the eastern Mediterranean currently includes the guided-missile cruiser Marshal Ustinov, which has sailed from its Arctic base of Severomorsk, and the guided-missile frigate Admiral Makarov detached from the Black Sea Fleet.” 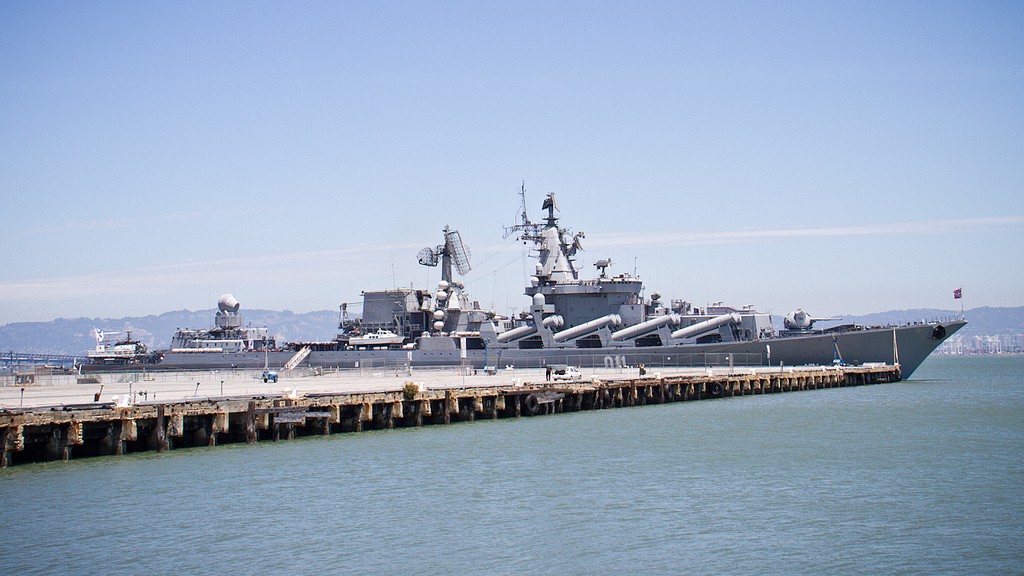 The Soviet Union maintained a constant navy vigil in the Mediterranean during the Cold War but Russia’s presence in the region withered in the years after the 1991 Soviet collapse amid economic woes and military funding shortages.

As part of Russian President Vladimir Putin’s efforts to beef up the Russian military amid tensions with the West, the Russian navy in recent years has revived the Soviet-era practice of constantly rotating its warships in the Mediterranean.

Next month, the Russian navy plans to open a maintenance shop in Tartus that will further bolster the base’s capability.

“It will make it easier to repair ships and maintain its naval capability in the region,” said Yevgeny Gushchin, a navy officer in charge of the shop. “We now have to deliver all spares and repair tools by plane, which slows things down. We will be able to manufacture them here.”