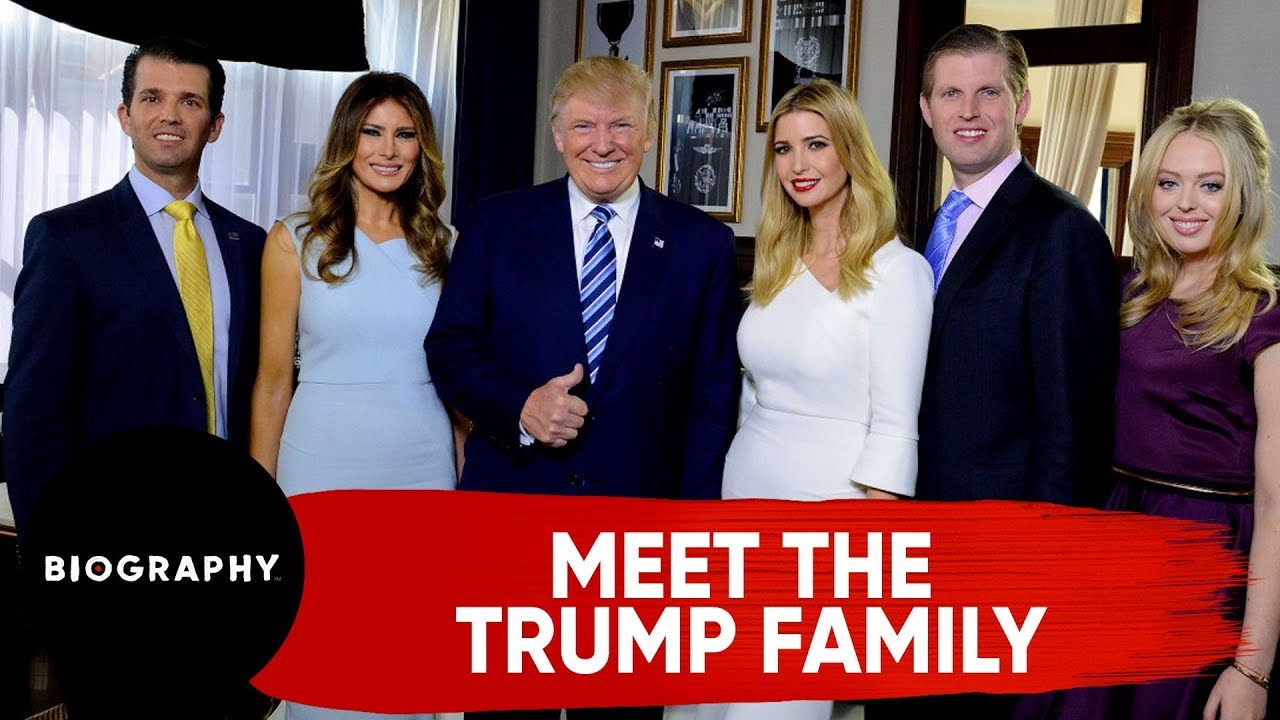 We’ll probably never know to what extent the republican President Donald Trump with his chief adviser and Son-in-Law Jared Kushner as well as the rest of the family have used the White House to enrich themselves until after they’re long gone from the Washington DC scene. But for the sake of historical records preservation, it’s important that we eventually learn as much as possible as to the level of corruption that permeated the White House under President Trump’s administration.

There’s this current set of circumstances where it appears that the White House has made overtures to purchase a German business in the process of developing a vaccine to treat the coronavirus COV-19 disease spreading throughout the world, with the caveat that the vaccine would be for the use in the USA, only.

Then there’s this question about the president’s son-in-law Jared Kushner’s involvement in a COV-19 testing company, Oscar that his brother Josh is a part owner. (On 3/13/2020, Oscar, a tech-driven health company, launched its first testing center locator for COVID-19 in the U.S., with plans for more than 100 centers that would be accessible to the general public with more testing centers to be added, daily.)

Keep the information garnered from 10/23/2018 article, “Josh Kushner’s Thrive Capital brings in $1B”by Kate Clark of TechCrunch.com in mind when reading below article regarding the business called “Cadre.”

“Days after marrying supermodel Karlie Kloss, Kushner’s VC firm Thrive Capital has announced the close of $1 billion in new capital for its sixth flagship venture fund. The firm has raised $600 million for late-stage deals and an additional $400 million for earlier bets.”

“Thrive is stage and industry agnostic with investments in Oscar, Cadre,  a real estate software company co-founded by the Kushner brothers, Glossier, Warby Parker,  Slack, Robinhood and Stripe. Its exits include Spotify, Twitch and GitHub, of which it owned a 9 percent stake at the time of its $7.5 billion sale to Microsoft earlier this year (2018).”

“Berlin is trying to stop Washington from persuading a German company seeking a coronavirus vaccine to move its research to the US, prompting German politicians to insist no country should have a monopoly on any future vaccine.”

“Germany’s Health Ministry confirmed a report in newspaper Welt am Sonntag, which said President Donald Trump had offered funds to lure the company CureVac to the United States, and the German government was making counter-offers to tempt it to stay.”

“The German government is very interested in ensuring that vaccines and active substances against the new coronavirus are also developed in Germany and Europe,” the newspaper quoted a Health Ministry official as saying. “In this regard, the government is in intensive exchange with the company CureVac.”

“Contacted by Reuters, a spokeswoman for the German Health Ministry said: “We confirm the report in the Welt am Sonntag.”

“The privately-held company based in Tuebingen, Germany hopes to have an experimental vaccine ready by June or July to then seek the go-ahead from regulators for testing on humans.”

“Karl Lauterbach, a professor of health economics and epidemiology who is also a senior lawmaker with the Social Democrats, junior partners in Chancellor Angela Merkel’s coalition, tweeted in reaction to the Welt am Sonntag report: “The exclusive sale of a possible vaccine to the USA must be prevented by all means. Capitalism has limits.” 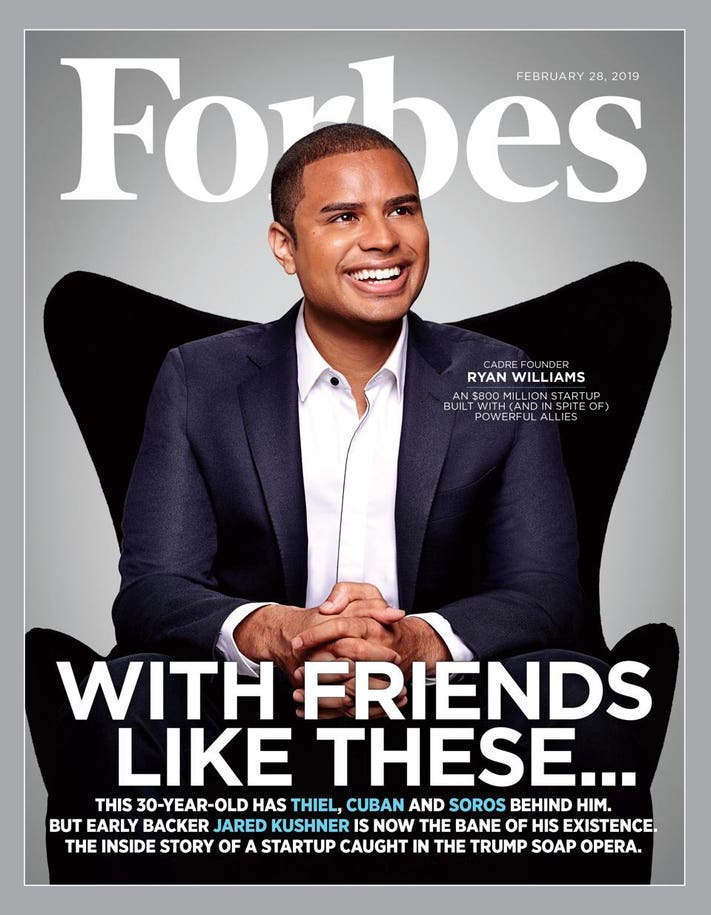 In November 2016, Samantha Sharf of Forbes penned the following report, “How A 28-Year-Old Plans To Upend The $81 Trillion Global Real Estate Investment Market”

“So in 2014 (Ryan Williams) founded Cadre with college buddy Joshua Kushner (managing partner Thrive Capital and co-founder Oscar health insurance) and Kushner’s brother Jared (who runs the family real estate empire when he is not running father-in-law Donald Trump’s presidential campaign). Two years later the Kushners are advisors, alongside a slew of a-list investors who have plowed $68.3 million into Cadre. Williams runs the company from the historic Puck Building, which Kushner Properties owns and where Oscar also has offices.”

“Today, Cadre is an invitation-only platform that directly connects high-net-worth and institutional investors to commercial and multi-family real estate deals. By cutting out middlemen with technology Cadre says it is able to charge lower fees.”

“But Williams claims his vision (for)”Cadre started because I shared the belief that there needed to be a way for everyday people to access real estate, but not just to have access but to have insight,” he says, explaining that former employer Blackstone has built the largest real estate investment portfolio in the world thanks to superior information. Williams wants to take that institutional level insight and bring in to everyone.”

“Jared Kushner divested from dozens of investments when he became a White House adviser. One that he held onto paid off when he sold it last month (February 2020).”

“Kushner was allowed to defer the taxes on his profits from the sale of his stake in Cadre, the online real-estate company he co-founded, thanks to a sign-off from the U.S. Office of Government Ethics.”

“The certificate of divestiture he received is typically awarded to incoming federal employees who have to shed assets that could complicate their public work. Getting one for declaring a conflict after so much time has passed is far less common, according to several people familiar with the ethics office’s work.” 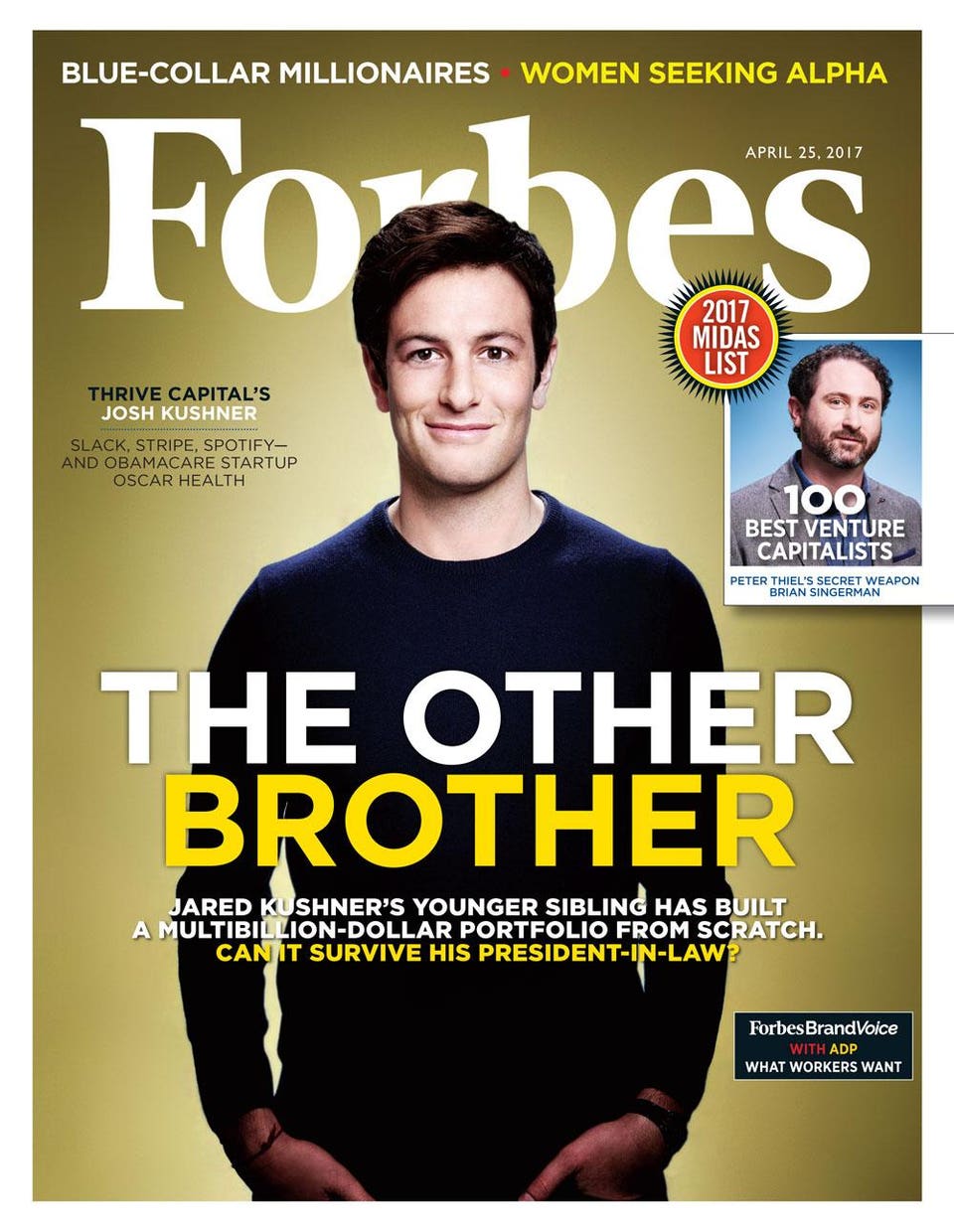 “These certificates of divestiture are only supposed to be used if they identify that the holding is a conflict of interest,” said Virginia Canter, a former ethics adviser to Democratic presidents who is now chief ethics counsel for Citizens for Responsibility and Ethics in Washington, a group that has been critical of the Trump administration. “They’ve been contending all along that it isn’t a conflict of interest for him to hold this.”

“By waiting, Kushner was able to sell at a higher valuation than he could have when he entered the administration of his father-in-law, President Donald Trump. After Kushner joined the White House in 2017, he said his stake in Cadre was worth $5 million to $25 million. The company subsequently got a round of funding that valued it at $800 million. Kushner’s latest government filing valued his stake at $25 million to $50 million.” 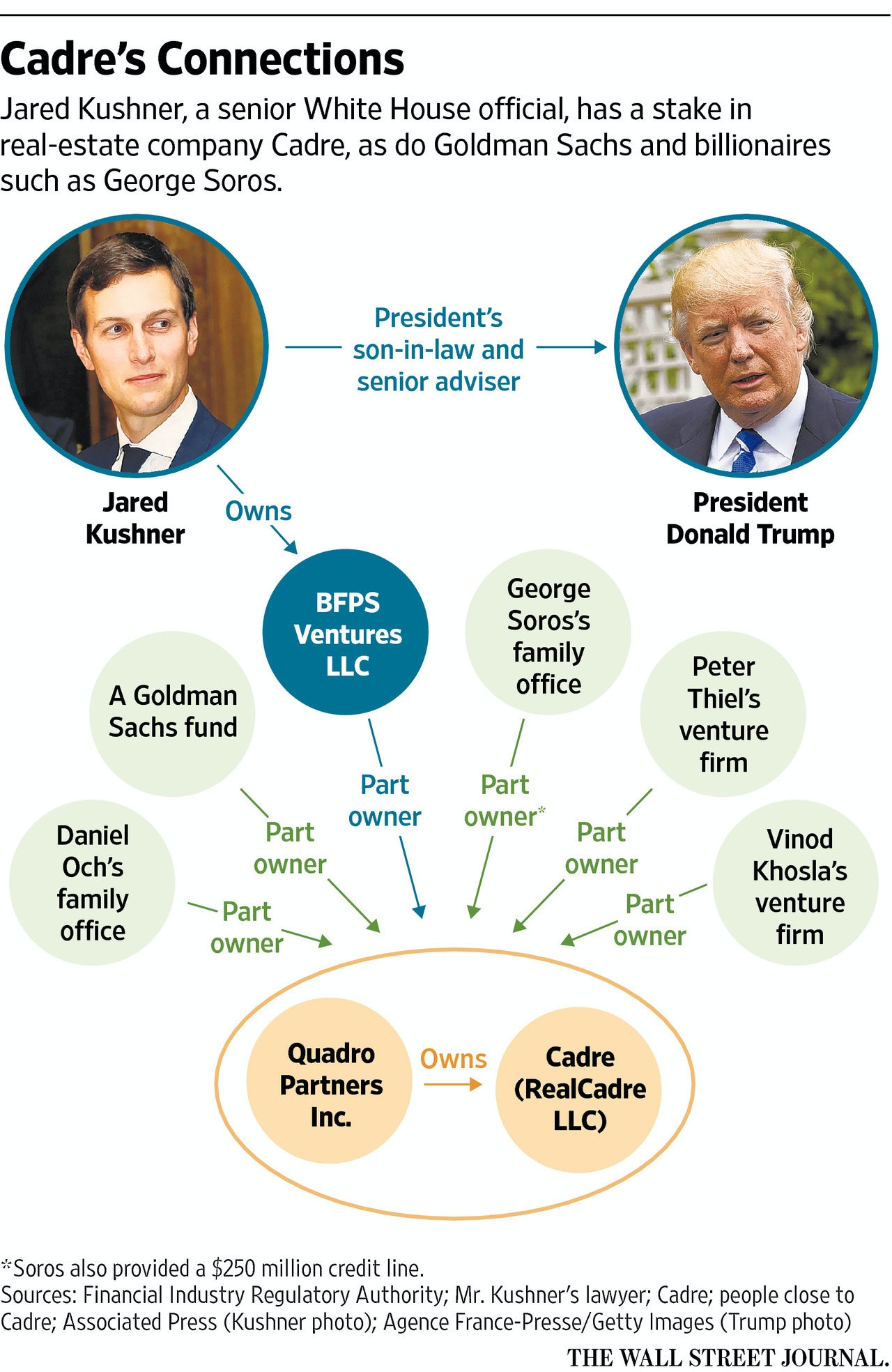 “Neither Kushner nor Cadre provided a sales price for his stake. Because he invested early in the company, most of the sale proceeds would be profits and therefore taxable to him. At the $50 million level he disclosed, the tax bill might have approached $10 million.”

“The ethics office said: “OGE is committed to transparency and citizen oversight of government. However, OGE does not respond to questions about specific individuals.”

“For Kushner’s first 3 years in the White House, his representatives said the stake presented no conflict, pointing out he’d given up his management roles at the company and become a passive shareholder.”

“Even so, high-level representatives from Cadre were frustrated by the complications caused by its ties to Kushner and made it known to him that they wanted him to sell, Bloomberg News has reported. In an interview published in Forbes last year, Ryan Williams, the company’s CEO and Kushner’s co-founder, said, “I can’t force anybody to sell their equity.”

“In 2018, Cadre held talks with the SoftBank Vision Fund about a possible investment in the start-up. The fund gets much of its capital from the Saudi government; Kushner’s portfolio as a senior adviser to the president includes Mideast policy. The fund wanted Kushner to sell, people familiar with the talks have said. He didn’t, and the deal fizzled.”

“When Bloomberg News reported on Feb. 28 that Kushner was divesting, Lowell said Kushner had complied with all ethics rules and made the decision to sell after Cadre “decided to pursue opportunities that could unknowingly to Mr. Kushner become future conflicts.” 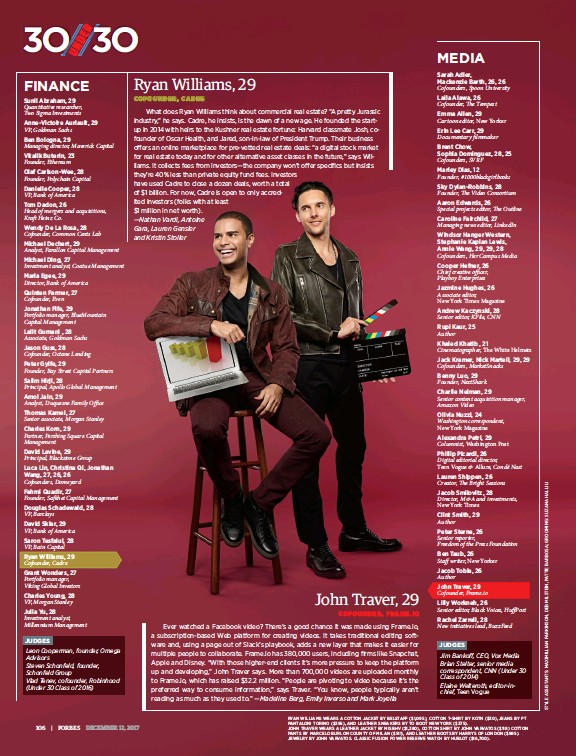 “Last year, Cadre received approaches from investors that posed potential conflicts for Kushner, according to people familiar with the matter, and the company flagged them to Lowell. In December, Kushner moved his shares into a trust to begin the divestment process after consulting White House counsel and the Office of Government Ethics.”

“The sale may make it easier for Cadre to do business, especially overseas, as it seeks new equity investments and new clients for its real-estate platform. The company operates a marketplace to sell stakes in properties to high-net-worth individuals. Like other marketplace operators, Cadre doesn’t make public the identities of clients.”

“Ethicists raised concerns that parties could seek to curry favor with Kushner with investments in the fund, while representatives for Kushner say he has maintained a firewall.”

Cadre’s Kushner ties run deep. The company was co-founded by Jared Kushner, his brother Josh Kushner and Williams. The company’s first completed deal cycle, used as a proof of concept for potential investors, relied on a partnership with Kushner Cos., the Kushner family’s development company, to sell a handful of residential buildings in Queens, NY. Its offices are in the Puck Building in downtown Manhattan, one of the Kushners’ most valuable properties, and Josh Kushner maintains a stake through Thrive Capital, his venture firm.”

“Cadre has begun investing in the “opportunity zone” program, which provides capital gains tax breaks for investing in designated poor areas. The program was created with the passage of Trump’s 2017 tax law, and backed by Kushner.”