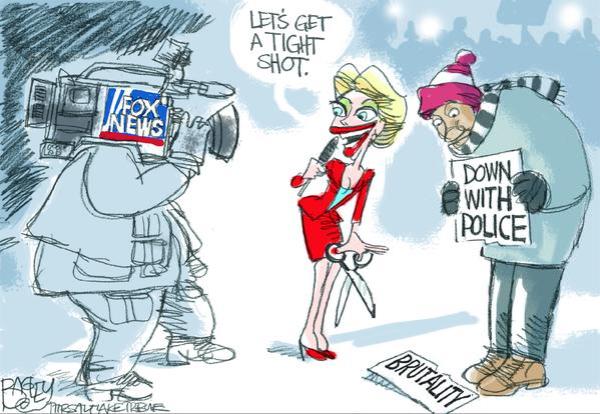 The story of the Ferguson Police Department’s Public Relations Officer, Timothy Zoll describing Michael Brown’s memorial as a pile of thrash to a Washington Post reporter reflects the attitude by the Ferguson police department which set the stage for this tragedy where the unarmed, Black older teenager, Michael Brown was fatally shot by the White Police Officer, Darren Wilson on 8/9/14, in Ferguson. MO.

In my mind, the media pundits became complicit in this drama by not doing a more in depth investigation regarding many of the issues interwoven with this story.

I am going to illustrate my point by focusing on Witness 10, the same one, the only eye witness who verified Officer Wilson’s story 100%. He was the lynch pin that gave officer Wilson any credibility and by comparison placed some doubt as to other witnesses’ recollections. It would be unusual, for any group of people to witness a trauma for a short period of time to not have dissimilarities in their version of the event but there will develop a consistency to some of the major points. Witness  10 testimony has no major points in his story which matches  the vast majority of the other eye witnesses’ recall.

Lawrence O’Donnell, host of the MSNBC TV show, “The Last Word” has commented on Witness 10 on several of his shows. He explained some of the discrepancies between Witness 10’s statement to the police on 8/11/14 and his grand jury testimony. He reported that Witness 10 originally said that Michael Brown and Dorian Johnson were behind him on the same sidewalk where he was positioned, and that he viewed the crime drama from a distance of about 100 yards; however, during his grand jury testimony, he stated that both men were walking in the middle of the street and that he could see everything from a distance of 50 to 75 yards away. Lawrence O’Donnell fact checkers are correct regarding these variances in Witness 10’s assertions for the record, but he missed the smoking gun.

In a previous blog I added some thoughts to Lawrence O’Donnell’s  remarks regarding Witness 10.  In the transcribed 8/11 police interview, Witness 10 seems to become confused as to the timeline.  He indicates that the events started at 8:40 a.m. but then he corrects himself and states that the time was around 11:40 a.m. It is as if he is trying to remember what he is supposed to say. He could not provide the phone number or the address of his employer but he could provide directions. Later, he says that on 8/9, he was working for an individual living in the area.  He describes seeing a blue Monte Carlo at the scene about 3 times during this interview. All the other witnesses including those in the car describe the color as white. 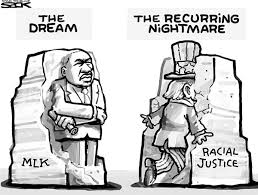 Of course, Witness 10 states that he did not see Officer Wilson shoot at Michael Brown when he was fleeing. So, I counter this in a previous blog by analyzing the physical evidence. In the autopsy report by the St. Louis County Office of Medical Examiner, Exam Case # 2014-5143, on pages 3-4, the medical examiner lists the following gun shot injuries sustained by Michael Brown on 8/9/2014.

6.) There is a gunshot entrance wound of the upper ventral right arm.

7.) There is a gunshot exit wound of the upper dorsal right arm.

8.) There is a gun shot entrance wound of the dorsal right fore arm.

9.) There is a gun shot exit wound of ventral right fore arm.

10.) There is a tangential (graze) gun shot wound of the right bicep.

I point out that it is possible that Michael Brown incurred the grazed wound to his right bicep and the entrance wound of the upper ventral arm as his arms were partially raised.  It is my contention that when he suffered the entrance wound of the dorsal (back side) oh his right fore arm , this could have been incurred while Michael brown was running away, which could account for Dorian Johnson and others being convinced that he was shot in the back.

Witness 10 was the only witness who concurred with Police Officer Daren Wilson’s allegation that as Michael Brown turned around, he reached with his hand towards his waistband. PBS published a table of eyewitnesses. listing eye witnesses 22, 30 and 64 as indicating Michael Brown lowered his hand but there are caveats which are significant. For example, Witness 30 is an admitted felon who alleges that Michael Brown held the gun which was directly pointed back to himself, and consequently, he has no credibility. Witness 64, a credible witness simply says that Michael Brown tried to raise his hands but lowered it while using the other hand to clutch his chest. Witness 22 states that she heard the beginning shots, she and her boyfriend did not see anything until Michael Brown was facing Officer Wilson with his hands partially raised. In conclusion, Witness 10 is the only one who categorically vouches for Officer Wilson’s accounts 100%. On pages 4-5 of the 8/11 interview linked in the footnote below and referenced in the ST. Louis County police report #14-43984, he is noted as stating the following comments on 8/11/14:

“So, the police officer exited the vehicle with his weapon drawn pursuing Mr. Brown. Mr. Brown was quite a distance and he stopped and when he stopped, he didn’t get down on the ground or anything. He turned around and did some type of movement. I never saw him put up his hands or anything. I can’t recall the movement that he did. I’m not sure if he pulled his pants up or whatever he did but I seen some type of movement and he started charging towards the police officer.” 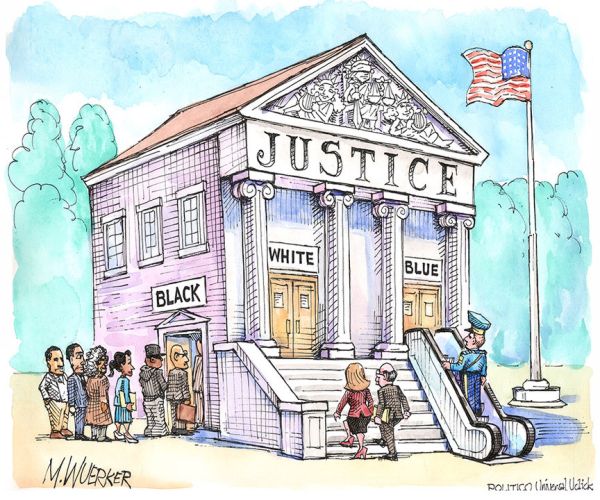 I have been waiting for over a month to see a story on this issue by the media which never materialized but this just goes to support my contention, that the media haven’t done the level of investigative reporting that this case warrants.

What I am referring to is that Witness 10 in his 8/11/14 interview with the ST. Louis County lead detective, as per page 9-10, he specifically states that he saw Michael Brown inside Officer Wilson’s SUV and he is the only witness who ever alleged this. The following are some excerpts:

The lead detective asks, “I just wanna make sure I understand okay? You see him in the car. You can’t necessarily tell what’s going on but after hearing the gun shot and seeing him run off, you make an assumption that there’s some sort of confrontation or conflict in side the car, right?”

The lead detective inquires, “Okay, so how…roughly how long do you think that he is, that Michael Brown is in the car?”

On page 5 of the ST. Louis County police report of the transcribed 8/11/14 interview, Witness 10 continues with the following remarks:

“And, Um, I must say what it was but I thought I heard something metal hit the ground and I’m not sure what it was. Um, I went in to tell the people that I was working with that I just..what I witnesses and I came back out and they were taping the scene off and I decided, I went down there closer to where the body was and I stayed down there ten..5 to 10 minutes.”

Witness 10 is so accommodating and willing to say whatever the police wish to hear that I couldn’t help but wonder why? I started speculating as to whether he might owe the police a favor, or perhaps he is a confidential informant. I do not know what the answer is but his statements were so in line with Officer Wilson and at odds to the vast majority of other credible witnesses, that they should have asked themselves, was Witness 10 too good to be true?

This drama is to be continued in my next bog.

Witness 10’s  testimony can be viewed in pages 149- 200 of Vol. 6 of grand jury transcript. On pages 195, he states for the record that he has no connection to the Ferguson Police Department. However, when he was at the crime scene on 8/9/14, he noticed Michael Brown’s Step Father and thought he knew him.  Later, he was reading a newspaper and realized that he did recognize the Step Father. The prosecutors did ask him how he happened to know the Step Father but the answer is redacted on Vol. 6, page 196. The prosecutors did question him if he was a friend or if there was a negative relationship with Michael Brown’s Step Father. Witness 10 responded that he was not a friend but that there wasn’t anything negative about the relationship, either. Witness 10 voluntarily came forward by personally walking into the police station, the Monday after the shooting, August 11, 2014 and that is when he participated in his one and only police interview before he testified before the grand jury. On page Vol. 6, pg. 198, he volunteers his earlier allegation that he heard something metallic hit the ground as Michael Brown is fleeing from Officer Wilson and he still volunteers that he saw  a  blue Monte Carlo at the shooting scene. He departs from his initial police interview by stating that just Michael Brown’s upper body is inside the police SUV; that now Michael Brown and Dorian Johnson were walking in the street but closer to the sidewalk curb; that he was witnessing events from a distance of 50 to 75 yards away, that he was too far away to hear what was said  by either Michael Brown or Officer Wilson. Yet, supposedly he was still able to hear something metallic hit the ground. The prosecutors played the CD of Witness 10’s prior 8/11 police interview (Vol. 6, pages 215-231) for the grand jury but they interrupt it at the point when he mentions that he saw Michael Brown inside the police SUV. They explained that another witness was ready to testify. Needless to say, Witness 10 was never cross-examined by the prosecutors about the major discrepancies between his 8/11 police statement and his grand jury testimony.

Grand Jury Evidence – St. Louis Public Radioapps.stlpublicradio.org/ferguson-project/evidence. html All Ferguson Coverage … If you have questions about this evidence or have found anything interesting …. Reports, Forensic Evidence and other Interviews.