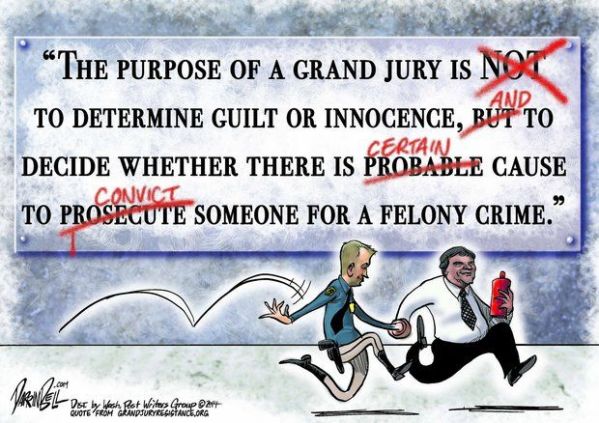 The Ferguson grand juror is a profile in courage for coming forward to file suit against Prosecutor McCulloch. He is petitioning for the right to publicly detail what transpired within the halls of the grand jury proceedings where 12 jurors sat together for 25 days to arrive at a consensus not to indict the Police Officer Darren Wilson for the shooting of an unarmed, Black older teenager, Michael Brown in Ferguson, MO on 8/9/14. Because 9 jurors out of 12 are required to agree on an indictment, it is very possible that Prosecutor McCulloch has not being completely forthcoming about the grand jurors reaching a consensus to not charge Officer Wilson with any crimes. For example, the break down of the vote could have been 8 for an indictment and 4 dissenting. While, the prosecutor would be barred from indicting Officer Wilson, this breakdown could not be construed to be a collective decision.

“St. Louis County prosecutor Bob McCulloch and two of his assistants are facing a misconduct complaint for the way they handled the grand jury that investigated former Ferguson police officer Darren Wilson.”

“The complaint was filed Monday with the Missouri Office of Chief Disciplinary Counsel which handles attorney discipline in the state. It accuses McCulloch and assistants Kathi Alizadeh and Sheila Whirley of “gross failure to vigorously represent their client – the citizens of St. Louis, Missouri, in their capacity as prosecutors.” Alizadeh and Whirley were in charge of presenting the Wilson case to the grand jury.”

“We would like to send the message that prosecuting attorneys can no longer abuse their power and expect it to be swept under the rug,” said Christi Griffin, a former attorney who is the founder and president of the Ethics Project, and one of seven citizens to sign the complaint.”

On 1/6/15, the NAACP is stepping up to plate. An article by “Think Progress” by Judd Legum reports the NAACP Legal Defense Fund has written a letter to the Missouri Judge, Maura McShane, imploring her to investigate the Ferguson Prosecutor Robert McCulloch and his team for “Misconduct.  The NAACP letter points out that as per Missouri Law, Statute 56.110, Judge McShane has the power to investigate Prosecutor McCulloch and to appoint a special prosecutor to restart this case against the Police Officer Darren Wilson. The following are excerpts from the letter:

1.) “McCulloch and his team knowingly presented false witness testimony to the grand jury.

2.) McCulloch and his team presented incorrect and misleading statements of the law to the grand jury and sanctioned unlawful juror practices. Specifically, Assistant prosecuting Attorney, Kathi Alizadeh distributed copies of a Missouri Statute that was overturned by a Supreme Court decision 30 years earlier. When Alizadeh addressed the issue weeks later she said, that the statute was “not entirely incorrect or inaccurate,” but the grand jury should “disregard” it. At other times, Ms. Alizadeh seems genuinely confused about what legal standards were at issue and shared her confusion with the grand jury, including this remarkable exchange.  A grand juror asked if the legal standard required to determine the outcome of this case, would be outlined in writing for the jurors. This is Ms. Alizadeh’s response:

“I don’t know because we don’t know. If this matter were a trial, it would be different because obviously, in a trial, it is beyond a reasonable doubt. And in a trial, it is the obligation of the defense to raise the issue, and if the issue is raised, it becomes the obligation of the state to prove beyond a reasonable doubt that the person did not act in lawful self defense or was not justified in the use of force, but that is a trial setting. 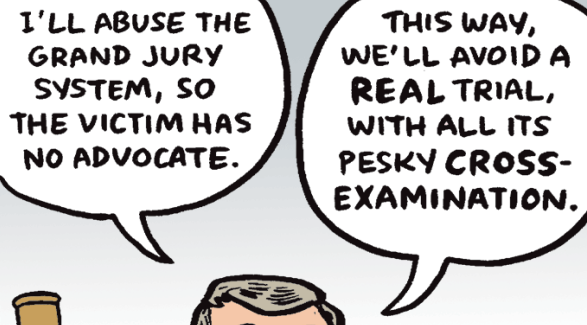 So we don’t know how this, this investigation was, we talked about it yesterday, is not typical on how we would present cases to the grand jury. This is an investigation and I believe, and I think Sheila agrees, I don’t want to speak for you, that your determination of whether or not force was justified, either as self defense or use of force to affect an arrest is part of your decision process.

The NAACP also pointed out that the assistant prosecutors gave the grand jurors instructions that they could do internet research despite being strictly cautioned not to by a judge at the beginning of this hearing.

3.) McCulloch and his team “provided favorable treatment to the target of the grand jury proceedings.”

“The NAACP concludes that the entire process “leaves deeply troubling doubts about whether justice was administered in a fair, impartial and competent manner.” The NAACP encourages Judge McShane to consider “remedial action — through a new grand jury, appointment of a new special prosecutor, or other means.”

With all the above actions, the truth may yet prevail regarding what occurred on 8/9/14, when Michael Brown was shot by Police Officer Darren Wilson in Ferguson, MO. This saga continues in my next blog.

The argument regarding #3. above is crucial in that the prosecutors never fully explained the difference between the 1985 U.S. Supreme Court, Tennessee v Garner ruling which bars a police officer from chasing an unarmed fleeing suspect and the Missouri statute which doesn’t bar the officer from pursuit. The grand jurors had a their own copy of the incorrect legal reference, the Missouri statute throughout most of the hearing. The grand jury transcript on this discussion can be found in Vol. 24, pages 135-140. Now, keep in mind that the discussion of the Supreme Court was shared with the grand jurors on their last day before deliberations commenced. On page 140, a prosecutor is explaining that the jurors should use the self defense statutes as a reference and she states: “So, in this case we are talking about probable cause, as we’ve discussed, you must find probable cause to believe that he committed the offense that you are considering and you must find probable cause to believe that he did not act in lawful self defense. Not that he did, but that he did not and that you find probable cause to believe that he did not use lawful force in making the arrest.”