aside With The Press Getting A Lot Wrong, Why Should We Believe Their Reports On The Hispanic Vote?

Dear Media, Within the Hispanic community, there is a significant amount of contention about the accuracy of the recent media paid for and published election day exit polls.The figures that have been posted deviate dramatically with those arrived at by the polling company, Latino Decisions which bases Its research on official voting data released by precincts. Edison, the polling company contracted by the media is reporting that Mr.Trump garnered the Hispanic by 29% whereas Latino Decisions is showing him winning by only 18%.

Being that the establishment media has been wrong on just about everything else during this 2016 presidential election season, the editors owe it to their readers to do an in-depth job of investigating and reporting on the disparity of 11 points between Edison and the Latino polling company’s numbers..

The following articles reflect the Hispanic voters’ doubts about the current exit polls results, as well as their thoughts as to why the democratic presidential nominee, Hillary Clinton did not earn more votes.

NBC News published on 11/10/16 the article, “Latino Leaders: Trump Did Not Win 29 Percent of Hispanic Vote,” by Suzanne Gamboa. Here is what was reported:..

“Latino leaders are refusing to accept exit poll data showing President-elect Donald Trump won 29 percent of the Hispanic vote Tuesday. Instead the leaders said they stand by the findings of Latino Decisions polling firm, whose data showed a record low 18 percent of Latinos voted for Trump.” 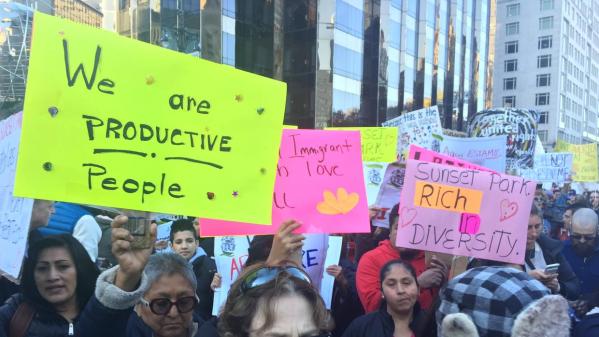 “We strongly dispute exit poll reports that suggest Trump support for the Latino community exceeded that of Mitt Romney in 2012,” Janet Murguía, president of the National Council of La Raza, said at a Thursday news conference in Washington, D.C. Several other leaders were at the news conference and echoed her remarks.

The groups also criticized media for accepting and reporting the exit poll numbers.“It is an insult to us as Latinos to keep hearing the media ignoring empirical data that was presented by Latino Decisions and representing an alternative number that we do not accept and we reject,” Murguía said.

The 11/12/16 Guardian report,”Latino leader attacks Clinton campaign for taking Hispanic vote for granted,” by Ed Pilkington, paints a critical picture of how Hillary Clinton did not garner more if the Hispanic vote. Here are some excerpts:

“Hillary Clinton’s presidential campaign made critical errors in its handling of Latino voters, giving them the impression they were being patronized and taken for granted in a way that depressed turnout and could have cost her the White House, a prominent leader of the Hispanic business community has charged.”

“Javier Palomarez, president and chief executive of the US Hispanic Chamber of Commerce (USHCC), made an impassioned critique of the tactics deployed by the Clinton campaign in its attempt to garner Latino support.”

“We thought this election cycle would be different,” Palomarez told the Guardian. “Unfortunately, Hillary Clinton was advised once again by Beltway advisers who knew it all, had the models and the projections, but who called it wrong.”

“The USHCC was singularly invested in the outcome of Tuesday’s election, as it had endorsed Clinton for the presidency – the first time it has done so for any candidate in its 38-year history. The chamber is the largest Hispanic business organization in the country, with 4.2m businesses on its books that contribute $668bn to the US economy.”

“Palomarez was especially scathing about the decision to choose Tim Kaine, a senator from Virginia, as Clinton’s running mate, passing over the rising Hispanic star Julian Castro, currently housing secretary within the Obama administration.”

“I have to believe that if she had a Hispanic standing beside her she would have got more of the young vote, more of the Hispanic vote, and today she would be president-elect,” he said.”

“He blamed the decision on what he called the “young white Ivy League-  kids” who were advising Clinton.”

“Palomarez is convinced the top team around the Democratic nominee came to the conclusion that given Trump’s extremist comments about criminal Mexicans, the Latino vote was secure and could be taken for granted.”

“Somewhere along the line they decided that they had the Hispanic vote in the bag and there was no need to worry about it,” he said, “but you have to ask today: did that strategy of blowing off the Hispanic vote work for them?”

“But nationwide exit polls suggest that the promise failed to materialize. They show that Clinton took 65% of the Latino vote, down from Barack Obama’s 71% in 2012, while Trump’s 29% share was actually two points up on Mitt Romney.” 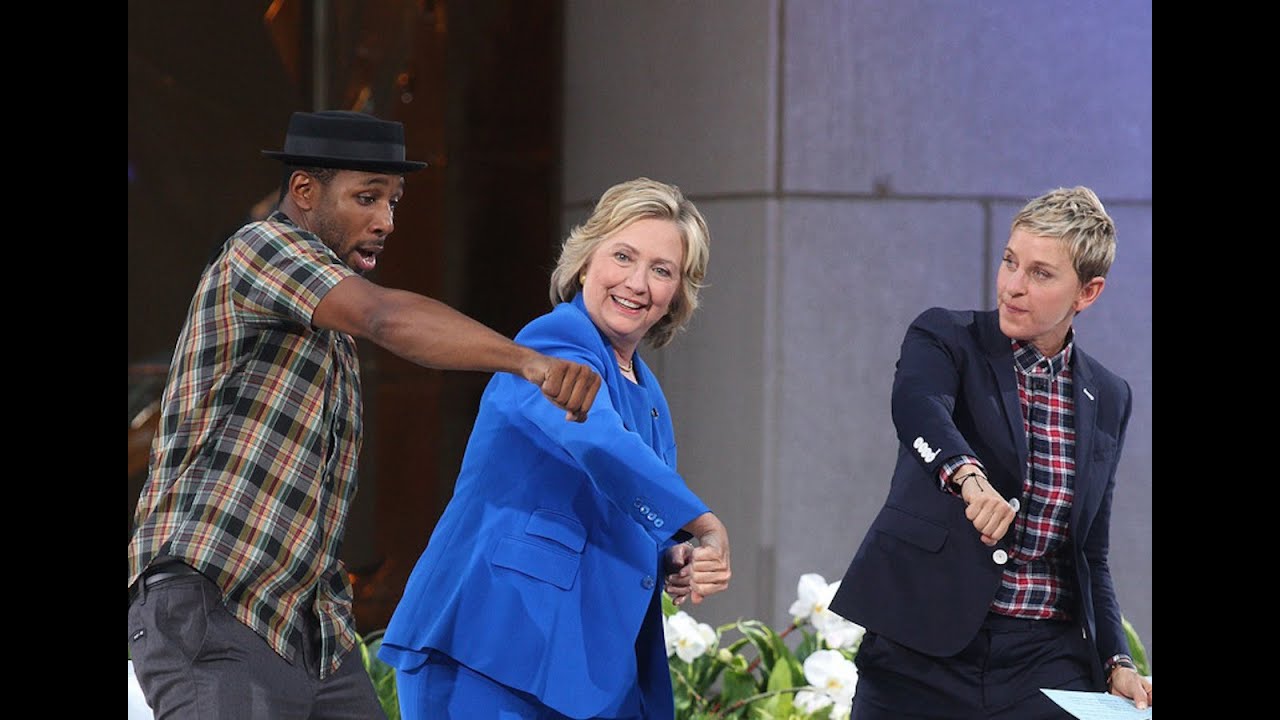 “Clinton’s pollsters, Latino Decisions, have vociferously disputed the exit polls, arguing that they give a completely false picture of what happened on election day. The polling company claims the exit polls grossly underestimate precincts with high proportions of minority voters in them.”

“Matt Barreto, Latino Decisions’ principal pollster to the Clinton campaign, told the Guardian that in his opinion Palomarez’s criticisms were reflective of widespread frustration at Trump’s victory.”

“If Clinton had won,” he said, “people would now be praising the campaign’s Latino outreach – they are frustrated not with the campaign, but with the outcome.” 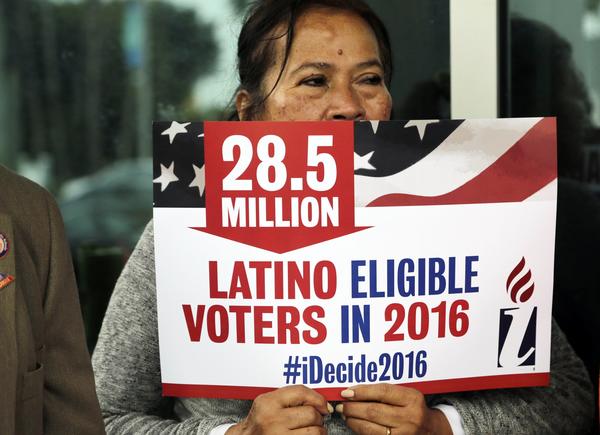 The campaign itself also disputes any suggestion that it underplayed the importance of the Latino vote. Clinton emphasized several policy pledges directed at Hispanics, including a promise to extend Obama’s Daca and Dapa programs that grant legal status to millions of undocumented immigrants as well as a vow to push for comprehensive immigration reform to forge a pathway to citizenship for all 11 million undocumented people currently living in the shadows.”

” I was very candid with her,” he said. “I said we believe it is time to put a Hispanic on the ballot. But in the end, in their Beltway brilliance, her advisers thought that going with a white guy who could speak Spanish, Tim Kaine, would be enough for the Hispanic electorate.”

“We adore Tim Kaine, but if you think a Spanish speaker is a replacement for a bona fide Hispanic, absolutely not, and the numbers have shown that.”

“Palomarez also complained that when the USHCC invited Clinton to attend its annual national convention in Miami in October, the largest gathering of Hispanic business leaders in the country, her advisers decided against her appearing even though she happened to be in the same city at the time.” (She attended an Al Gore rally.)

“The campaign did not pay attention to the issues that Hispanics care about – economic arguments, job creation, innovation. I resent the fact that they seemed to think we are all in one bucket when in fact Hispanics are very diverse.”

“As a result she lost a portion of the Hispanic vote that could have been hers, it was there for the taking.”

“Palomarez argued that Florida, a state that Trump was under intense pressure to win with its large crop of 29 electoral college votes, could have swung to Clinton if more attention had been paid to Hispanic voters. Exit polls showed Clinton taking 62% of the Latino vote in the state to Trump’s 35%.”

“Again, those figures are disputed by Latino Decisions. Its research, based on official voting data released by precincts, tells a different picture for dominant Hispanic areas.”

“For example, Kissimmee in central Florida, where there has been a large influx of Puerto Ricans in recent years, voted heavily for Clinton. In some parts, the Latino vote was as high as 80% for the Democratic candidate, with as little as 17% for Trump.”