Dear Reader, You are about to see for yourselves how the republican President-elect Donald Trump is maneuvered by his number ONE sycophant and chief strategist elect, Steve Bannon, former chairman of the Alt-right news outlet, Breitbart. While Donald Trump himself may not be ideology driven, many who are riding on his coattails and who surround him are. Like Steve Bannon, there are those who have their own Alt-right agendas which they are prone to push forward.

The following report is lengthy but important to read as it is the template of how U.S. officials can gaslight the entire nation. Gas lighting is a phenomenon where peoples are manipulated into doubting themselves about what they have seen and heard with their own eyes and ears.

David A. Farenthold and Frances Stead Sellars have penned the 11/15/16 Washington Post article to demonstrate, “How Bannon flattered and coaxed Trump on policies key to the alt-right.”  (The article shows by example, how Steve Bannon influences Donald Trump during the Breibart radio shows hosted by himself.) Here is the report:

“Soon after terrorist attack skilled 130 people in Paris last year, Donald Trump faced sharp criticism for saying the United States had “no choice” but to close down some mosques.

Two days later, Trump called in to a radio show run by a friendly political operative who offered a suggestion.

Was it possible, asked the host, Stephen K. Bannon, that Trump hadn’t really meant that mosques should be closed?

That’s right. That’s not going to happen,” he told Bannon.

“Today, Trump is president-elect. Bannon, the former Breitbart News chief who helped guide Trump’s victorious campaign, is set to be one of the new president’s most influential advisers. The clearest public sense of how the two will work together — and what policies Bannon may try to push — can be gleaned from a series of one-on-one interviews on Bannon’s radio show between November 2015 and June of this year.”

“In those exchanges, a dynamic emerged, with Bannon often coaxing Trump to agree to his viewpoint, whether on climate change, foreign policy or the need to take on Republican leaders in Congress.”

“At times, Bannon seemed to coach Trump to soften the harder edges of his message, to make it more palatable to a broader audience, while in other cases he pushed Trump to take tougher positions. He flattered Trump, praising his negotiating skills and the size of his campaign crowds.”

“The conversations marked a coming-together of Trump, who at the time was a pariah among many top Republicans, and the alt-right, a loosely defined term describing a far-right ideology that includes opposition to immigration and “globalism” and had found a home in the Breitbart News empire. The alt-right movement has also been saturated with white-nationalist rhetoric, prompting criticism of Bannon’s appointment this week, though Bannon has said the movement is not racist.” 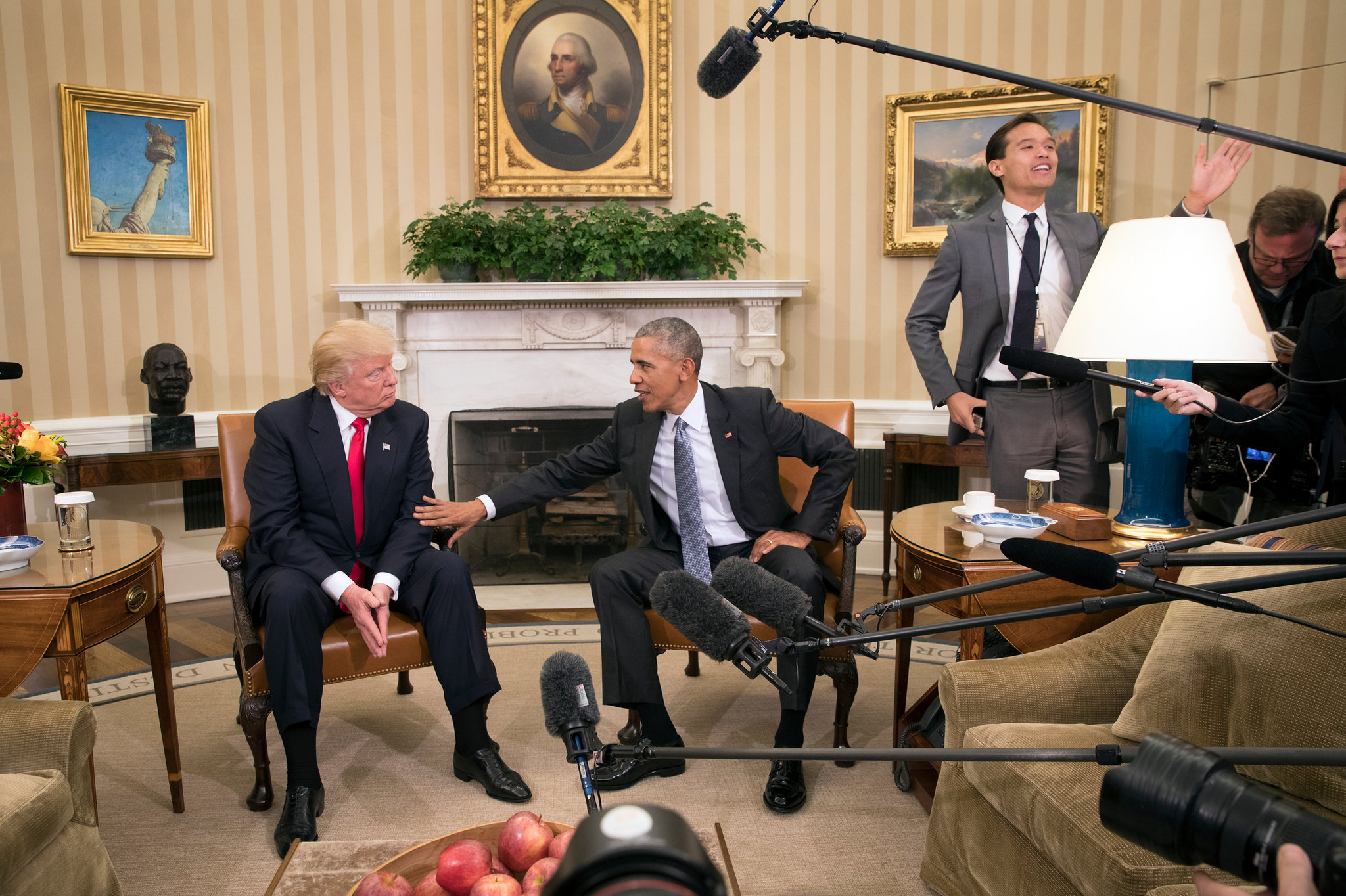 “Were you actually saying, you need a [New York City police] intelligence unit to get a network of informants?” Bannon asked. He continued: “I guess what I’m saying is, you’re not prepared to allow an enemy within . . . to try to tear down this country?”

“Trump — presented with a less controversial but entirely different idea than what he’d actually said — agreed.”

A spokeswoman for the Trump transition did not respond to a request for comments on behalf of Bannon and the president-elect.

Bannon’s interviews with Trump were done for Breitbart News Daily, a radio program that airs on SiriusXM satellite radio’s “Patriot” “ channel, a home for conservative talk. In all, they add up to more than two hours of one-on-one conversation.” 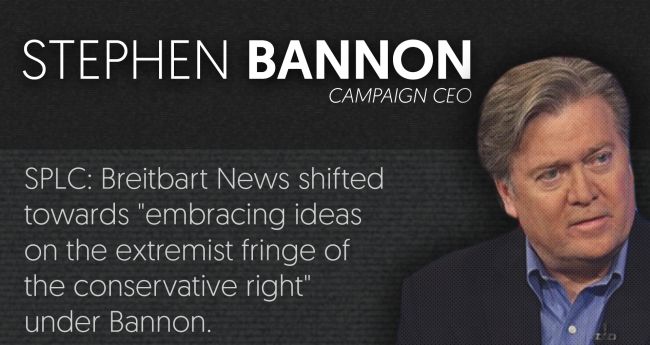 “By the time of that first show, Breitbart had already become a crucial booster of Trump’s presidential campaign.”

“When Trump came on the air, the first thing Bannon wanted to talk about was how well Trump was doing in his campaign — and how Bannon had noticed it before other people did.”

“I said, ‘This guy, people are leaning forward in these audiences when he’s talking,’ ” Bannon said, recalling earlier conversations about Trump’s run. “And we were mocked and ridiculed.”

“We had 20,000 in Dallas. . . . And 35,000 in Alabama, and 20,000 in Oklahoma,” Trump said, talking about his rallies. “We’ve had a lot of fun talking about very negative subjects. Because everything is negative with the country, Steve, I mean, there’s nothing good happening.”

“During their conversations, there were some moments on-air when Trump and Bannon disagreed. Though not many.”

“Last November (2015) for instance, Trump said he was concerned that foreign students attending Ivy League schools have to return home because of U.S. immigration laws.”

“We have to be careful of that, Steve. You know, we have to keep our talented people in this country,” Trump said. He paused. Bannon said, “Um.”

“When two-thirds or three-quarters of the CEOs in Silicon Valley are from South Asia or from Asia, I think . . . ” Bannon said, not finishing the sentence. “A country is more than an economy. We’re a civic society.”

“Trump said he would build a border wall, but still wanted to let highly educated foreign students who graduate from U.S. colleges to be able to stay in the country.”

“I still want people to come in,” Trump said. “But I want them to go through the process.”

Bannon said: “You got to remember, we’re Breitbart. We’re the know-nothing vulgarians. So we’ve always got to be to the right of you on this.”

In most of the interviews, Bannon often called his subject “sir” or “Mr. Trump.” Trump called his interviewer “Steve.”

“In his questions, Bannon often began with praise for Trump. Asking about foreign affairs, for instance, Bannon praised Trump’s capacity for deal making.”

“The flattery often came before a leading question.”

“Last December, Bannon told Trump that, “I know you’re a student of military history.” Then, he laid out a case for questioning the U.S. alliance with Turkey, a member of NATO since the 1950s.”

“Wasn’t it true, Bannon asked, that the situation was a bit like the web of treaties that connected European countries before World War I?” 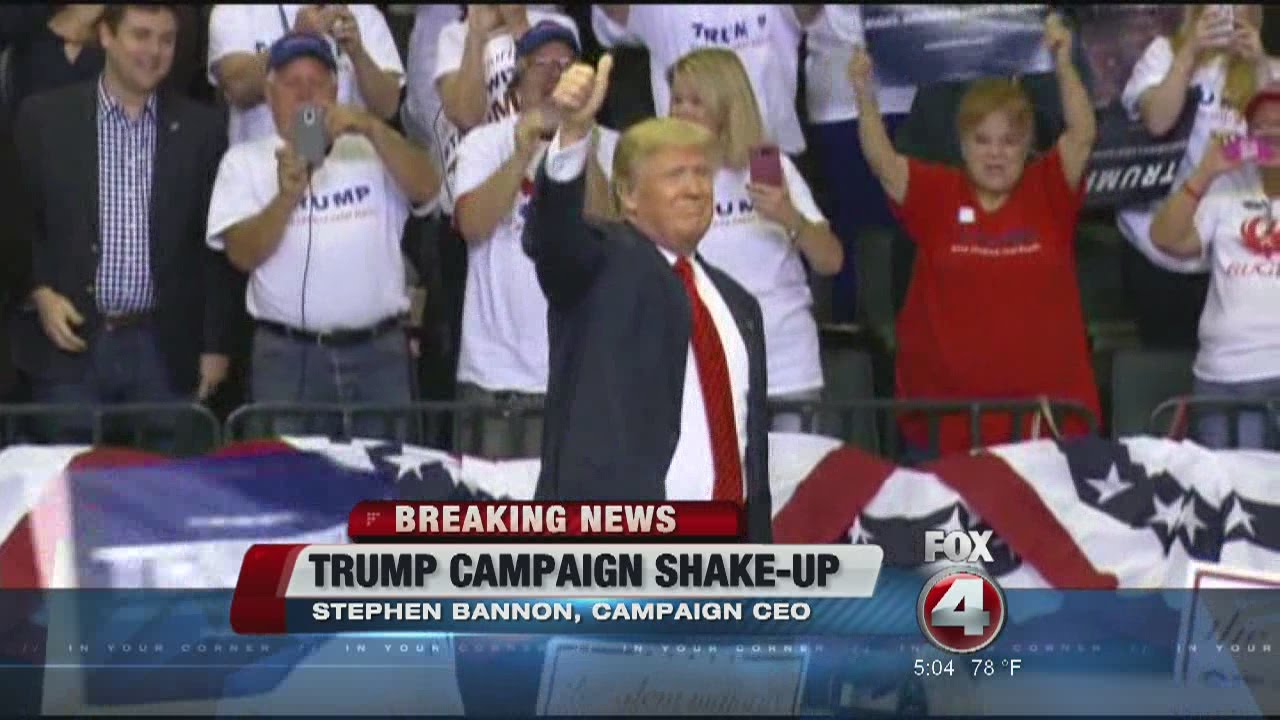 “People were locked into these treaties. . . . It led to the beginning of the bloodiest century in mankind’s history,” Bannon said. He said that Turkey had changed since it joined NATO, turning to Islamism under President Recep Tayyip Erdogan. What if Turkey was drawn into a broader conflict in Syria, perhaps with Russia?”

“This is not something, Steve, that you want to end up in World War III over,” Trump said.

“In other cases, Bannon would use his questions to frame policy choices — and then ask Trump if he agreed with the frame and the choice.”

“In the December interview, Bannon presented the problems of climate change and the Islamic State as a binary option — offering Trump, in effect, the choice of fighting one or the other.”

“Do you agree with the pope and President Obama that (climate change) is absolutely a path to global suicide, if specific deals are not cut in Paris, versus focusing on radical Islam?” Steve Bannon asked, referring to the negotiations that eventually led to a global climate agreement in Paris last year.”

“Trump said that what other people considered to be climate change was probably just weather. Radical Islam should be the focus.”

“We are fools,” Trump said, meaning the Obama administration.”

In the wake of House Speaker Paul D. Ryan’s early May announcement that he was not ready to back Trump, Bannon invited Trump to reflect on whether Ryan (R-Wis.) was showing “a lack of respect — not just for you, but for your policies.”

“On issues ranging from trade to slowing Muslim immigration, Bannon said, “What (Ryan) wants is for you to drop those policies. Are you prepared to do that for unity?” When Trump later began to say it would be “better if we do get together,” Bannon interrupted, saying that Ryan’s version of unity would represent “a collapse of what you ran on and a collapse on what (voters) backed you on.”

“Well, you can’t do that,” responded Trump.”

“Bannon also seemed to recognize when Trump had made a potential gaffe — even when Trump had not — and to try to steer him back to correct it. The first time Bannon asked Trump about U.S. foreign policy toward Turkey, Trump volunteered that he had business interests there.”

“I have a little conflict of interest, because I have a major, major building in Istanbul,” Trump said. “It’s called Trump Towers. Two towers, instead of one. Not the usual one, it’s two. And I’ve gotten to know Turkey very well.”

“A little later, Bannon circled back, asking Trump to explain why his conflict of interest should not bother voters.”

“They say, ‘Hey look, this guy’s got vested business interests all over the world. How do I know he’s going to stand up to Turkey?’ ” Bannon said.

“Trump did not directly address the question.”

“In another conversation, around February Trump began with an attack on Sen. Ted Cruz (Tex.), his GOP primary rival, saying, “I’ve never seen any human being lie like he lies.”

“Bannon, who had also praised Cruz in the past, interrupted.”