The former NY Mayor Rudy Giuliani is the quintessential opportunist and sycophant riding on the republican President-elect Donald Trump’s coattails. He finally boarded on the  Trump train only after “The Donald” won the NY primary to be the republican presidential nominee.

Fortunately, although he has been leaking his possible appointment as secretary of state wherever he can like at the recent WSJ dinner, his appointment has not been officially confirmed. It is important to note that Mr. Giuliani’s former law firm does represent FBI agents and that his past experience as a federal prosecutor would make it very likely he does have strong contacts within the FBI community.

It could be that Rudy Giuliani is not the shoo-in that he thought because, it has been reported in various media outlets, that Mitt Romney will be undergoing an interview for the very same position that Mr. Giuliani aspires to, U.S. secretary of state.

To my way of thinking, when he had recently been caught bragging on TV and radio news stations while being recorded, about having ties to New York  strong anti- Clinton, former and current FBI agents and that an election tsunami was about to occur, he was dealing in confidential data with the intent of effecting the presidential election outcome. He was in fact, doing exactly what he has been saying publicly about Mrs. Clinton’s email handling, and if life were remotely fair, he would now be under investigation. Within a couple of days of the election D-day, he tried to walk back some of his statements which were quickly disproved by his earlier interviews. Frankly, the man can’t keep his mouth shut, and this trait alone should disqualify him from consideration.

On 11/15/16 the Editorial Board of The NY Times published their Op-Ed piece opposing the possible appointment of Rudy Giuliani as secretary of state:

“World leaders watching America make a shift under Donald Trump fall into two broad camps: those who hope that the United States will muddle through the next four years, an inexperienced president notwithstanding, and those who are eager to see Washington’s international standing and influence unravel.”

“The latter outcome could be averted if Mr. Trump selects an experienced and conscientious leader as his top diplomat. That would require appointing someone other than Rudy Giuliani, the former New York mayor, who is reported to be the front-runner for the job.”

“Before addressing why he would be a dismal and potentially disastrous choice, it’s worth reflecting on the enormous foreign policy challenges the incoming administration will face.”

“A successful secretary of state must be steeped in history and geopolitics and have shrewd negotiating skills and a clear sense of America’s capabilities, principles and the limits of Washington’s power.” 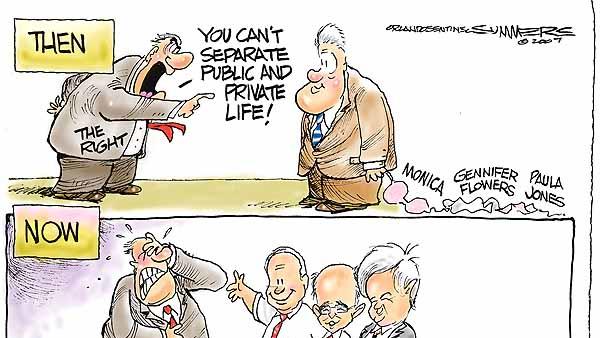 “The extent of Mr. Giuliani’s international experience has been largely limited to giving speeches and consulting work. He lacks any substantive diplomatic experience and has demonstrated poor judgment throughout his career. Indeed, as he became Mr. Trump’s most bombastic champion, Mr. Giuliani at times appeared unhinged.”

“For a taste of Mr. Giuliani’s foreign policy misadventures, consider his 1982 visit to Haiti as an associate attorney general. He preposterously proclaimed that there was “no political repression” on the island, which was then ruled by President Jean-Claude Duvalier, a tyrant. As mayor, he dabbled in petty diplomacy in 1995 by having the Palestinian leader Yasir Arafat ejected from a New York Philharmonic concert celebrating the United Nations.”

“Mr. Giuliani was embraced as “America’s mayor” after 9/11, a label, which he promoted for years, that allowed him to gloss over his poor performance in City Hall. Under his direction, NY City decided to base its emergency command center in the World Trade Center, a prime target that had been bombed in 1993. In 2000, he enraged black New Yorkers with his shockingly insensitive response to the fatal police shooting of Patrick Dorismond, an unarmed black man, whom Mr. Giuliani derided  as less than an “altar boy.”

“Since leaving office, Mr. Giuliani has earned millions working for foreign governments and businesses, which would raise a flurry of potential conflicts of interest. For instance, he was paid to deliver speeches in 2011 and 2012 defending a cult-like Iranian exile group that was on the State Department’s list of terrorist organizations.”

“In the long list of ridiculous things Mr. Giuliani has said, his remarks about President Obama in February 2015, when the presidential campaign was gearing up, were particularly disgraceful. “I do not believe that the president loves America,” Mr. Giuliani said at a dinner in Midtown Manhattan. “He doesn’t love you. And he doesn’t love me. He wasn’t brought up the way you were brought up and I was brought up through love of this country.”

“Mr. Trump, who has no background in international affairs, would be wise to seek the counsel of former Republican secretaries of state about the demands of the job. Anyone offering sound advice would urge him to scrap plans to have Mr. Giuliani run the State Department.”