aside Yes, The Retired Lt. General Mike Flynn Is A Conspiracy Nut?

It seems that the republican President-elect Donald Trump has selected a conspiracy nut, retired Lt. General Mike Flynn to be the next National Security Advisor. It would be crucial for the president elect to have information presented to him that is complete with alternate viewpoints, but that would be difficult for someone mired in fantasy fake news stories to accomplish.

In short, Lt. General Mike Flynn having participated in pushing fake stories against the democratic presidential nominee, Hillary Clinton, should disqualify him from being considered for the job as National Security Advisor. Incredulously, there are some pundits actually parsing the general’s actions, that he was not the creator of the crazy fake tales about Hillary Clinton. But he is just a person of significant stature, who has been trafficking in very ugly fake content as he passed it along to millions of viewers via tweets with his imprimatur it. 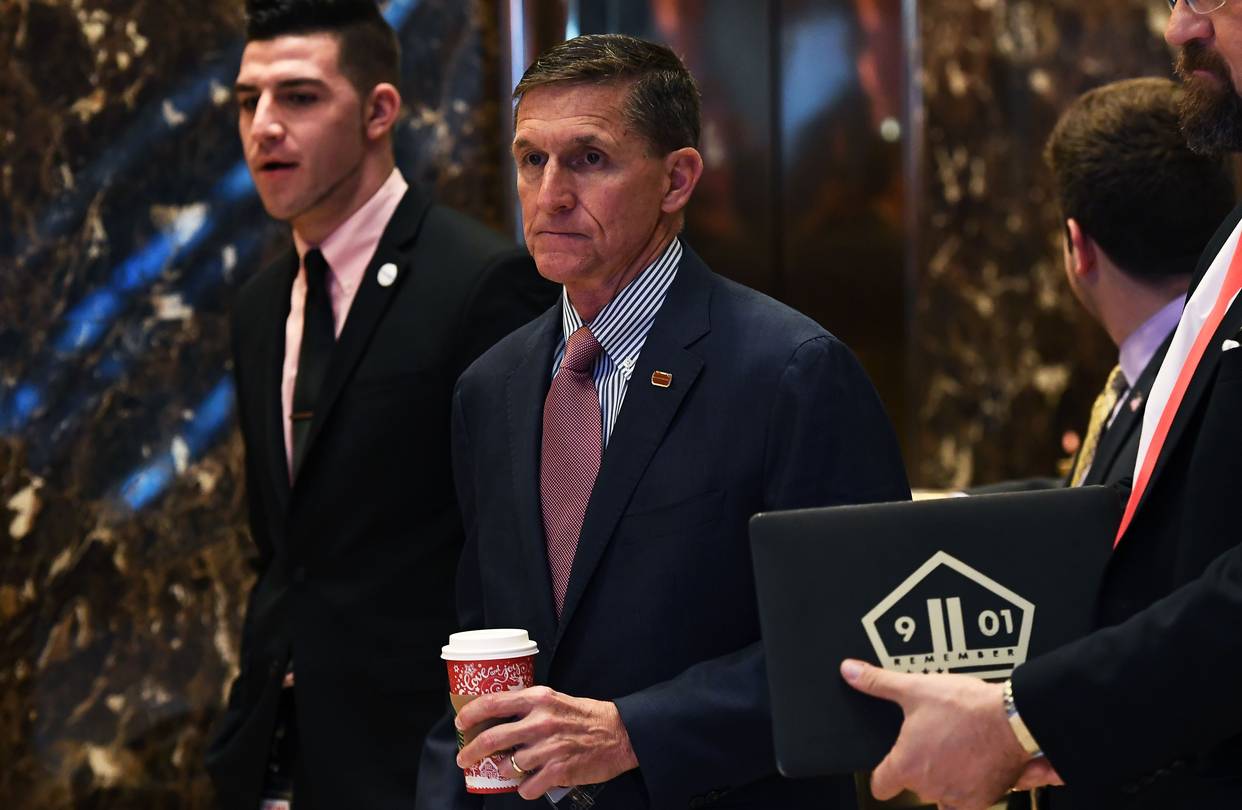 The general’s penchant for conspiracy theories and fake news is not a recent character flaw ascribed to him. When he was the Defense Intelligence Agency Director before he was forced to retire in 2014, his subordinates referred to his flimsy grasp of the truth as depicted in his out loud thinking episodes, as “Flynn’s Facts.”

No, I am not impressed by factors like the general ended his tweeting days once he became part of the republican-elect’s campaign team as a foreign policy advisor. As an aside issue, because of the general’s past trips to Russia as well as his numerous guest appearances on RT TV, Russia’s propaganda arm, it is very likely that Mr. Trump’s bromance with the Russian has been influenced by having this general on his team.

Other troublesome points include retired Lt. General Mike Flynn having lobbied for a company with connections to Turkey’s authoritarian president, and then his writing an article urging the extradition of a Turkish cleric, that the Turkey government is convinced was the mastermind behind the July 2016 attempted coup.

If the president-elect’s commitment to his supporters, of “making America safer,” is for real, then the retired Lt. General Mike Flynn is not the right pick.

Nor do I find those who are referring to the generals’s son, a major disseminator of fake news against the democratic presidential nominee as not being part of the president elect’s transition team, as a reasonable defense. This is because he was a paid advisor during the campaign time frame when the fake news phenomenon was in full force reaching millions of viewers.

The main media outlets are finally giving this story some news space but only because of recent disturbing news stories. This blind spot by the establishment news media is because their reporters were not paying attention to bloggers like Robert Matthew Goldstein of Art by Robert Goldstein, who had been sounding the alarm about this issue for months.

Yes, Facebook and Google are finally putting an end to the life span of Fake News but it is still an existing problem in twitter world.

Wait until you read the rest of the story as depicted in this 12/15/16 NY Times post by Matthew Rosenberg, “Trump Adviser Has Pushed Clinton Conspiracy Theories.” Here are excerpts:

“For Lt. Gen. Michael T. Flynn, who is President-elect Donald J. Trump’s choice for national security adviser, pushing conspiracy theories about Hillary Clinton is a family affair: Both he and his son, Michael G. Flynn, have used social media to spread fake news stories linking Mrs. Clinton to underage sex rings and other serious crimes, backed by no evidence. The Twitter habits of both men are attracting renewed attention after a man fired a rifle Sunday inside Comet Ping Pong, a Washington pizza restaurant that was the subject of false stories during the campaign tying it and the Clinton campaign to a child sex trafficking ring.”

“Well before he joined the Trump campaign, the elder Mr. Flynn, 57, a former director of the Defense Intelligence Agency, pushed unsubstantiated claims about Islamic law’s (Sharia Law) spreading  in the United States and about the attack on the American diplomatic compound in Benghazi, Libya.”

“But in his emergence this year as the angry former general out to help Mr. Trump clean up Washington, Mr. Flynn added wild stories about Hillary Clinton to his stock of unproven tales. Six days before the election, for instance, Mr. Flynn posted on Twitter a fake news story that claimed the police and prosecutors in New York had found evidence linking Mrs. Clinton and much of her senior campaign staff to pedophilia, money laundering, perjury and other felonies. “U decide,” Mr. Flynn wrote in the Twitter message on Nov. 2, though it appeared there was little doubt what he thought.

“The views Mr. Flynn has aired on social media, including messages that many viewed as crossing the line into Islamophobia, and his willingness to spread fake news stories had already prompted questions about his fitness to be Mr. Trump’s national security adviser.”

“But the gunfire on Sunday was a violent turn in the debate about how fake news is reshaping the United States, and it cast a spotlight on those like Mr. Flynn who actively spread false stories about Mrs. Clinton.”

“The hoax.about the child sex trafficking ring began spreading shortly before the election, and the restaurant, its employees and nearby businesses soon found themselves subjected to threats and harassment because of it, despite a complete absence of evidence.”

‘Then on Sunday, Edgar M. Welch, 28, of Salisbury, N.C., went to Comet Ping Pong in northwestern Washington armed with a rifle. The police said he told them later that he had gone to the restaurant to “self-investigate” the sex trafficking hoax.”

“Mr. Welch’s violent reaction to the hoax did not appear to faze the younger Mr. Flynn: On Sunday, hours after the gunfire, he went on twitter to say that until “Pizzagate” was proved false, it remained a story.”

“Michael G. Flynn, 33, is more than just a relative of an incoming senior administration official. In recent years, he has served as the chief of staff to his father, who started a private intelligence and consulting business, the Flynn Intel Group, after being forced to retire from the military in 2014.”

“Throughout the campaign, Michael G. Flynn served as a gatekeeper for his father, and he now appears to have a job with the Trump transition team *(This is being denied by Trump’s team.). Email sent to an address at the Flynn Intel Group returned with an automated response that provided a new email contact for both Flynns, and each had a Trump transition email address that ended with .gov.”

“The main difference in the son’s Twitter feed is that he appears to have shown even less restraint than his father when it comes to spreading conspiracy theories about Mrs. Clinton and her campaign.”He used Twitter to spread others’ suggestions that Mrs. Clinton and President Obama were “at the center” of the conflict in Syria and profiting from it and that both would be tried for treason if Mr. Trump was elected. He shared a fake news story that claimed hackers had found video evidence that President Bill Clinton had raped a teenage girl.” (There is actually a true story based on NY court records about a claimant alleging that she had been raped by Donald Trump at one of the NY infamous parties at the residence of Jeffrey Epstein.)

“Since Sunday’s gunfire at Comet Ping Pong, Michael G. Flynn has also continued to retweet messages that say the news media has sought to normalize pedophilia.”

(The General) “His role as national security adviser calls for mediating the conflicting views of cabinet secretaries and agencies, and sifting fact from speculation and rumor to help the new president decide how the United States should react to international crises.”

“It is a role that is likely to take on outsize importance for Mr. Trump, who has no experience in defense or foreign policy issues and has a habit of making broad assertions that are not based in fact.”

“Mr. Flynn, though, has shown similar inclinations both on Twitter and in regular life. His sometimes dubious assertions became so familiar to subordinates at the Defense Intelligence Agency that they came up with a name for the phenomenon: They called them “Flynn facts.”