aside Memo To The President-elect, The USA Is Not Russia

It is my opinion that the republican President-elect Donald Trump knows exactly what he is doing when he downplays the fact that Russia did indeed hack several U.S computer systems and then leaked data with the intent to influence the 2016 U.S. elections. His discounting of the U.S. intelligence community is part of his mindset which is unlikely to be moved after his scheduled meeting with intelligence officials on Friday (1/6/16) which has been set to specifically share the data that has been accumulated against Russia.

Then the president-elect’s demeaning of the media is also deliberate. As he frequently chastises media outlets, he is constantly instilling in the minds of his followers that they are not to rely on facts as disclosed by journalists.

The president-elect is attempting to immunize himself from having his set of beliefs challenged with hard data and information based on truth and reality by the two institutions that could impede him with his plans, the intelligence community including the CIA and the media establishment including CNN, the NY Times, and the Washington Post which he has already singled out for his censure along with others.

Well President-Elect Donald Trump, Guess what? The USA has not been metamorphosed  into Russia, and it never will be. The USA has a long history of supporting a free press as this is a pillar of our democracy.

But it should not surprise anyone, that our president-elect and his team have plans in mind to revamp how the intelligence community is structured. The following WSJ report details some of these plans. It is important to note that according to the WSJ, the president-elect’s National Security Advisor Gen. Mike Flynn (who is not required to undergo a U.S. congress confirmation hearing) and the Kansas republican Representative Mike Pompeo (who does have to withstand a confirmation hearing) to head the CIA, both share their leader’s antipathy towards the work product of the intelligence community. 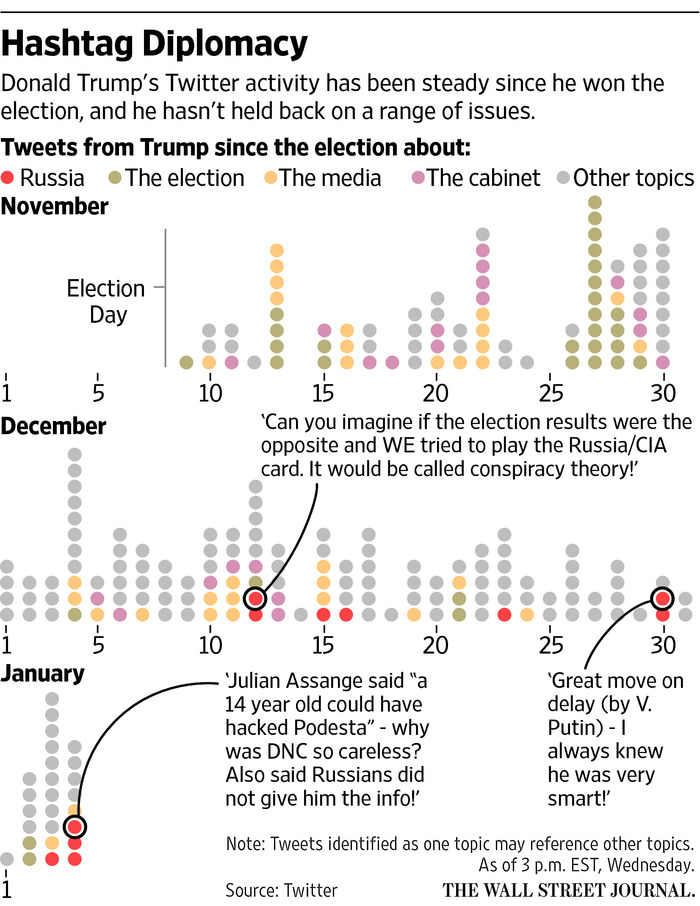 The source of the following excepts is from the 1/4/2017 Wall Street Journal article by Damien Paletta and Julian E. Barnes, “Donald Trump Plans Revamp of Top U.S. Spy Agency.”

“Mr. Trump has drawn criticism from Democratic and Republican lawmakers and from intelligence and law-enforcement officials for praising Russian President Vladimir Putin, for criticizing U.S. spy agencies, and now for embracing Mr. Assange, long viewed with disdain by government officials and lawmakers.”

“We have two choices: some guy living in an embassy on the run from the law…who has a history of undermining American democracy and releasing classified information to put our troops at risk, or the 17 intelligence agencies sworn to defend us,” said Sen. Lindsey Graham (R., S.C.). “I’m going with them.”

“But for Mr. Trump and some supporters, the accusations that Russia hacked Democrats are seen as an effort to delegitimize his election.”

“Since the November election, Mr. Trump has published close to 250 Twitter posts. Of those, 11 have focused on Russia or the election-related cyberattacks. In each of those tweets, Mr. Trump either has praised Russian President Vladimir Putin—last month calling him “very smart”—or disparaged the investigation into the hacks.”

“This stands in contrast with his posts on other issues and countries, such as North Korea or China, where his views on national security risks line up more squarely with U.S. spy agencies.”

“The Office of the Director of National Intelligence was established in 2004 in large part to boost coordination between intelligence agencies following the Sept. 11, 2001, terror attacks.”

“Lawmakers and intelligence experts in the past have proposed cutting or restructuring the ODNI. The President’s Intelligence Advisory Board, a White House panel, recommended in a classified report in 2010 that the agency be downsized and closely focused, according to the Congressional Research Service. The report didn’t result in legislation. Officials said change has proven difficult in part because its mission centers are focused on core national security issues, such as counterterrorism, nuclear proliferation, and counterintelligence.”

“The management and integration that DNI focuses on allows agencies like the CIA to better hone in on its own important work,” said Rep. Adam Schiff (D., Calif.), the ranking Democrat on the House intelligence panel, who believes dismantling the ODNI could lead to national security problems.”

“Mr. Trump’s advisers say he has long been skeptical of the CIA’s accuracy, and the president-elect often mentions faulty intelligence in 2002 and 2003 concerning Iraq’s weapons programs. But his public skepticism about the Russia assessments has jarred analysts accustomed to more cohesion with the White House.”

“Top officials at U.S. intelligence agencies, as well as Republican and Democratic leaders in Congress, have said Russia orchestrated the computer attacks on the Democratic Party last year. President Barack Obama ordered the intelligence agencies to produce a report on the hacking operation, and he is expected to be presented with the findings on Thursday.”

“Russia has long denied any involvement in the hacking operation, though Mr. Putin has said releasing the stolen emails was a public service.”

“The heads of the CIA, Federal Bureau of Investigation and DNI James Clapper are scheduled to brief Mr. Trump on the findings on Friday. Mr. Trump tweeted late Tuesday that this meeting had been delayed and suggested that the agencies still needed time to “build a case” against Russia. White House officials said Mr. Trump will be briefed on the hacking report as soon as it is ready.”

“Among those helping lead Mr. Trump’s plan to revamp the intelligence agencies is his national security adviser, Lt. Gen. Michael Flynn, who had served as director of the Defense Intelligence Agency until he was pushed out by Mr. Clapper and others in 2014. Also involved in the planning is Rep. Mike Pompeo (R., Kan.), whom Mr. Trump selected as CIA director.”
“Gen. Flynn didn’t respond to a request for comment on Wednesday, and Mr. Pompeo declined to comment. Gen. Flynn and Mr. Pompeo share Mr. Trump’s view that the intelligence community’s position—that Russia tried to help his campaign—is an attempt to undermine his victory or say he didn’t win, the official close to the transition said.”
“General Flynn will lead the White House’s National Security Council, giving him broad influence in military and intelligence decisions throughout the government. He is also a believer in rotating senior intelligence agencies into the field and reducing headquarters staff.”

“Current and former intelligence and law enforcement officials have reacted with a mix of bafflement and outrage to Mr. Trump’s continuing series of jabs at U.S. spies. Current and former officials said it was particularly striking to see Mr. Trump quote Mr. Assange in tweets. It’s pretty horrifying to me that he’s siding with Assange over the intelligence agencies,” one former law-enforcement official said.”
“Paul Pillar, a 28 year veteran of the CIA who retired in 2005, said he was disturbed by Mr. Trump’s tweets and feared much of the intelligence community’s assessments could be filtered through Gen. Flynn.”