As anyone who has ever studied this issue of the Israeli-Palestinian conflict, it is complicated to explain, but I am going to attempt it for the early years from 1918-1950. My idea is to present the overview with as few details as possible at this juncture.

Once upon a time there was the Ottoman Empire which flourished for over 4 centuries but it ceased to exist  in 1918. At the start of WWI in 1914, the Ottoman Empire, the world’s greatest independent Arab power, ended its neutrality when its sultan declared a military jihad (holy war) against France, Russia and Great Britain. At the end of WWI in 1918, the  areas of Iraq and Syria were colonialized by the Brits and the French, respectively. The Brits split up the Ottoman empire by drawing arbitrary new map lines for the countries that were to be designated as Turkey, Transjordan and Mandatory Palestine which today, is known as Israel..

Around 1918, there was a Jewish population living within the Ottoman Empire but now, they had a safe haven, set aside by British law. It was referred to as Mandatory Palestine. Before 1918, a territory known as Palestine did not exist. Initially, the Arab and Jewish peoples lived in peaceful co-existence until the Jewish population began to significantly increase in numbers.

Between 1933-1936  170,000 Jews immigrated to Palestine, doubling the size of the Yishuv and creating widespread alarm within the Arab community.

1930: The Hope-Simpson Commission conducts its investigation and publishes a statement of policy known as the Passfield White Paper. The Commission declares that Palestine has a limited absorptive capacity and proposes restrictions on further Jewish immigration. Zionists mount a concerted effort to have the entire document withdrawn.

1930: Two labor groups merge to form the Mapai Party, a group that dominates the political life of the Yishuv and the state of Israel until 1977. The party represents the socialist egalitarian ideal, holding the view that the interests of labor and of Zionism are identical. David Ben-Gurion becomes the party’s leader.

1933: The Revisionists form a separate movement within Zionism and set up their own military force in Palestine, the Irgun, a fiercely nationalistic organization. The group calls for massive Jewish immigration into Palestine and the immediate proclamation of a Jewish commonwealth.

1935: David Ben-Gurion is elected chairman of the Jewish Agency. In conjunction with his leadership of the Mapai Party, he is the acknowledged leader of the Yishuv.

April 19, 1936: Local Arab resistance committees declare a general strike in protest against Britain and the Zionists.

April 25, 1936: Arab leaders form a national organization, the Arab Higher Committee, under the presidency of the mufti. In an effort to unify the factions within the Palestinian elite, the committee attempts to coordinate the general strike.

October 1936: After the deaths of 1,000 Arabs and 80 Jews, the general strike is terminated by order of the Arab Higher Committee.

1936: Violence (the Arab Revolt of 1936-1939)  sweeps through Palestine as a spontaneous popular reaction against Zionism, British imperialism, and entrenched Arab leadership. 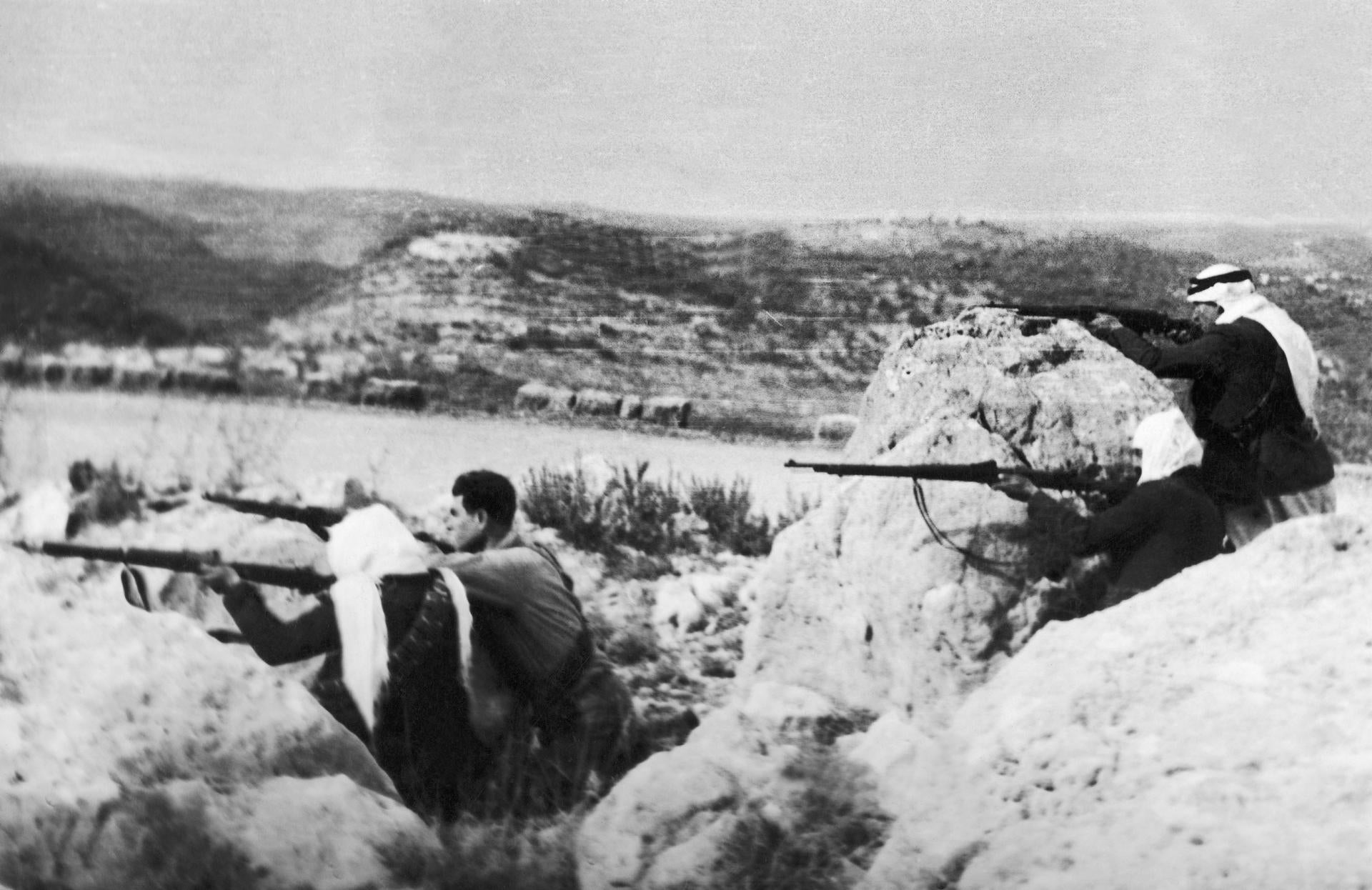 July 1937: The (Lord) Peel Commission issues a report recognizing that the premise of the mandate is untenable. The report recommends that the mandate be terminated and that Palestine be partitioned into separate Arab and Jewish states. The Arab Higher Committee opposes partition as a violation of the rights of the Arab inhabitants of Palestine. (This is the first time that a two state solution had been proposed.)

September 1937: The Arab Higher Committee is banned by the Mandate administration.

October 1937: The British district commissioner for Galilee is murdered. Britain dissolves the Arab Higher Committee, arresting and deporting its members. Arab rebel bands – no more than 5,000 strong – are supported by the rural population.

Summer 1938: Much of the countryside and several major towns are in rebel hands. Britain adopts harsh measures and pours 20,000 troops into  Palestine;  Jewish forces also engage in military action.

1939: Some 5% of the total land in the British mandate, making up about 10% of total cultivable land, is Jewish owned. Transfer of cultivated land from Arab to Jewish ownership has had a devastating effect on the Palestinian peasantry which still make up 2/3 of the Arab population of the mandate.

February 1939: The Colonial Office convenes an Anglo-Arab-Jewish conference in London, but  the conference fails to break the deadlock. A Subsequent White Paper states that:

His Majesty’s Government therefore now declare unequivocally that it is not part of their policy that Palestine should become a Jewish state.

The document declares that Jewish immigration is to be limited, that land transfers to Jews are to be restricted, and that in 10 years Palestine will be granted independence.

March 1939: The British manage to restore order. More than 3,000 Arabs, 2,000 Jews, and 600 British have been killed; the economy of Palestine is in chaos, and the Arab leaders are in exile or under arrest.

Fast forward to around November 1947, The United Nations adopts a plan to partition the Mandatory Palestine area. The specific borders for new Arab and Jewish states and an area of Jerusalem was to be administered by the UN under international rule. As the British Mandate for Palestine ended on May 14, 1948, this very same region became known as the State of Israel.

Before the borders of the new state were specified in the UN declaration and on the very next day, neighboring Arab armies invaded the territory, now known as Israel. The resulting 1948 Israel-Arab War led to the 1949 cease fire agreement which partitioned the former Mandatory Palestine between the newly established state of Israel with a Jewish majority, the West Bank including East Jerusalem annexed by Jordan ( formerly Transjordan) from 1948-1967 and the Arab All-Palestine Government in the Gaza Strip under the military occupation of Egypt.