aside Are Trump’s Executive Orders Part Of A Well Planned Coup?

It seems that our republican President Donald Trump is manically signing executive orders to curry favor with his followers without expending anytime to consider the consequences. For example, his own White House legal staff had advised him that banning green card holders from re-entry into the US would be unconstitutional. Even the current UK leader, Teresa Mays has been publicly critical of this recent move. This fight has been moved to the courts for now.

On 1/30/17, the NY Times reported the following: “Acting Attorney General Sally Q. Yates, a holdover from the Obama administration, ordered the Justice Department on Monday (1/30) not to defend President Trump’s executive order on immigration in court.”

Soon after, the Washington Post announced that President Trump fired Ms. Yates from being the Acting Attorney General.

I couldn’t stop chuckling when I read a tweet by the former republican Vice President Dick Cheney which was highly critical of the US president’s recent actions. Maybe, our president will end up uniting our country after-all.

While all of these outrageous news stories are swirling around us, the White House has been in the process of orchestrating a coup. This involves starting a war to restrict freedom of the press along with the centralization of power into the hands of a few trusted advisers like Steve Bannon, the White House’s chief strategist and retired Lt. General Mike Flynn, the adviser on national security. It is my hypothesis that all three are focused on achieving a major goal, the lifting of sanctions against Russia. (I have been speculating that our president is more motivated by his personal business interests associated with Russia than with protecting the US national security interests.)

But with the current make-up of the National Security Council, there was bound to be strong resistance regarding the lifting of current sanctions. The solution has been the promotion of Steve Bannon via executive order to a seat on the National Security Council’s principals committee. Former key players such as the chairman of the Joint Chiefs of Staff will attend NSC meetings, upon invite, only.

(Quote source: Washington Post) David J. Rothkopf, CEO of the Foreign Policy Group, calls the move dangerous: “First, he essentially demoted the highest-ranking military officer in the United States, the chairman of the Joint Chiefs of Staff, and the highest-ranking intelligence officer. … Hard as it is to imagine any situation in which their views would not add value, this demotion is even harder to countenance given the threats the United States currently faces and the frayed state of the president’s relations with the intelligence community. A president who has no national security experience and can use all the advice he can get has decided to limit the input he receives from two of the most important advisers any president could have. Worse still, it is a sign of other problems to come. … Moreover, elevating Bannon is a sign that there will be more than one senior official in Trump’s inner circle with top-level national security responsibility, an arrangement nearly certain to create confusion going forward.”

“President Donald Trump’s executive order to swap out his top military and intelligence chiefs from meetings of the National Security Council in favor of his controversial political adviser Steve Bannon drew furious reactions ranging from shock to disquiet over the weekend.”

“The move gives Bannon—a self-proclaimed “nationalist” who courted white supremacists and neo-Nazis as executive editor of the “alt-right”  Breitbart News—a regular seat in top secret discussions conducted by the NSC’s principals committee. The shuffle puts him “on par with the Secretaries of State, Defense, Homeland Security and Treasury” in the NSC, noted John Bellinger, a former State and Justice department official who served on the NSC in the George W. Bush administration.”

“Trump’s executive order also removed the chairman of the Joint Chiefs of Staff and the director of national intelligence (DNI) from the principals committee. CIA Director Mike Pompeo is not listed as a member or invited participant in NSC or principals committee meetings, which follows the practice of the Obama White House. But John Brennan, Obama’s CIA director, “did come to all” of the meetings, his former deputy chief of staff, Nick Shapiro, tells Newsweek.”

“Likewise, Robert Gates, who has held high posts in both Republican and Democratic administrations—CIA director under President George H. W. Bush  and defense secretary in the George W. Bush and Obama administrations— called Bannon’s promotion and the exclusion of DNI Dan Coats and Gen. Joseph Dunford, chairman of the Joint Chiefs of Staff, a “big mistake.”

“My biggest concern is there are actually, under the law, only two statutory advisers to the National Security Council and that’s the Director of Central Intelligence, or the DNI, and the Chairman of the Joint Chiefs of Staff. I think pushing them out of the National Security Council meetings, except when their specific issues are at stake, is a big mistake,” he said on ABC’s This Week. “I think that they both bring a perspective and judgment and experience to bear that every president, whether they like it or not, finds useful.”

“I’ve studied NSC my entire adult life,” tweeted David Rothkopf, author of Running the World: The Inside Story of the National Security Council and the Architects of American Power . “Putting Bannon on it and making DNI and Joint Chiefs optional is lunacy,” said Rothkopf, who is also the  CEO and editor of the FP Group, publisher of Foreign Policy magazine. “Shows zero comprehension.”

“Beside Bannon, the big winner in the shuffle appears to be Trump’s national security adviser Michael Flynn, a retired three-star U.S. Army general and former head of the Defense Intelligence Agency.”

“Critics in both parties were already alarmed about Flynn’s close ties to Russian officials and proclivity for alt-right conspiracy theories. On January 22, the Wall Street Journal reported that U.S. counter-intelligence agents were looking into conversations Flynn had with the Russian ambassador regarding  Obama administration “sanctions and other measures against Russia in retaliation for its alleged use of cyberattacks to interfere with the 2016 U.S. election.” 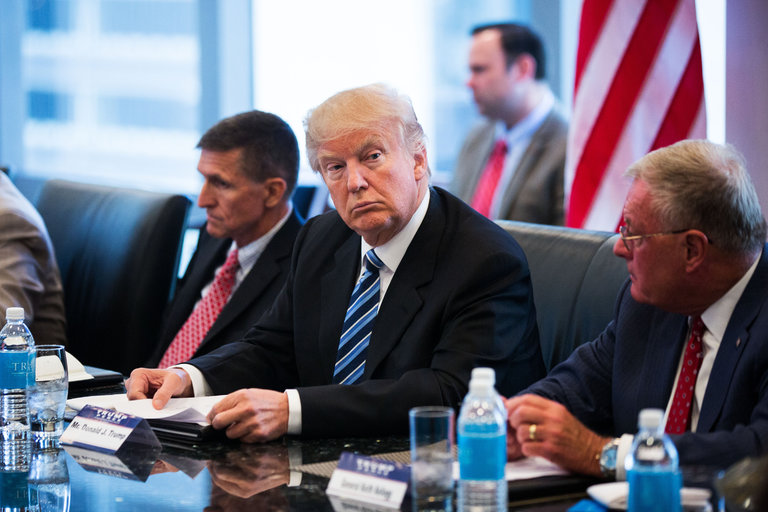 “Critics have suggested that Flynn may have counselled Moscow not to engage in a tit-for-tat retaliation for Obama’s expulsion of alleged Russian spies here.”

The attendance of DNI Coats and JCS chief Dunford “at the all-important (principals) meetings, where the real heavy lifting gets done…appears to be at the discretion of Mike Flynn,” said the former senior official, who met frequently with President George W. Bush. “That’s different. Very different.”