aside Bannon And Sessions Have Ensconced Another Sycophant In The WH

I had been pondering on a puzzle. To most political junkies, it appeared obvious that President Donald Trump’s chief Strategist, Steve Bannon had been the mastermind behind the president’s “travel ban” roll out. But I kept being nagged by the fact that this executive order reflected some of the US Attorney General, former Senator Jeff Sessions’ writings. The information that Jeff Sessions’ former top aid, Stephen Miller has been ensconced in the White House, along side, Steve Bannon resolves this question that I had at the start of this roll out.

The rest of the story...

As per a 6/27/16 Politoco.com article by Julia Joffe, Stephen Miller “was hired by Lewandowski from the office of Jeff Sessions, one of the most conservative and nativist members of the U.S. Senate. Sessions, who famously donned a Make America Great Again hat at Trump rally in Mobile back in August 2015, the only sitting senator to endorse Trump—which he did in February, a couple weeks after Miller jumped ship.”

“(Stephen) Miller and Jeff Sessions come from very different worlds. Miller is a 30-year-old policy wunderkind from liberal Santa Monica, California, who rose early through conservative ranks; Sessions, a 69-year-old ultra-conservative senator from a small town in Alabama. But if you’re looking to understand where Trump’s particular combination of fiery nativism, anti-immigrant fervor and “America First” foreign policy connects to modern politics, there’s a strong case to be made that this unlikely team from Capitol Hill has a lot to do with it: Trump is running on ideas that Sessions has been pushing for years—now crafted by Miller into a message for the candidate.”

“Sessions has long been a critic of legalizing undocumented immigrants, and has pushed to curtail immigration to the United States, in part by constructing a wall along the southern U.S. border. In fact, he has spent his two-decade career in Congress working to thwart immigration reform bills from both the right and left, with Miller coming on as an adviser in 2009 to join that effort. When the so-called Gang of Eight introduced a bipartisan immigration reform bill in 2013, Sessions played a key role in killing it; when the bill passed the Senate, his aide Miller literally wrote the 23-page handbook that House members were given on how to fight the deal.” 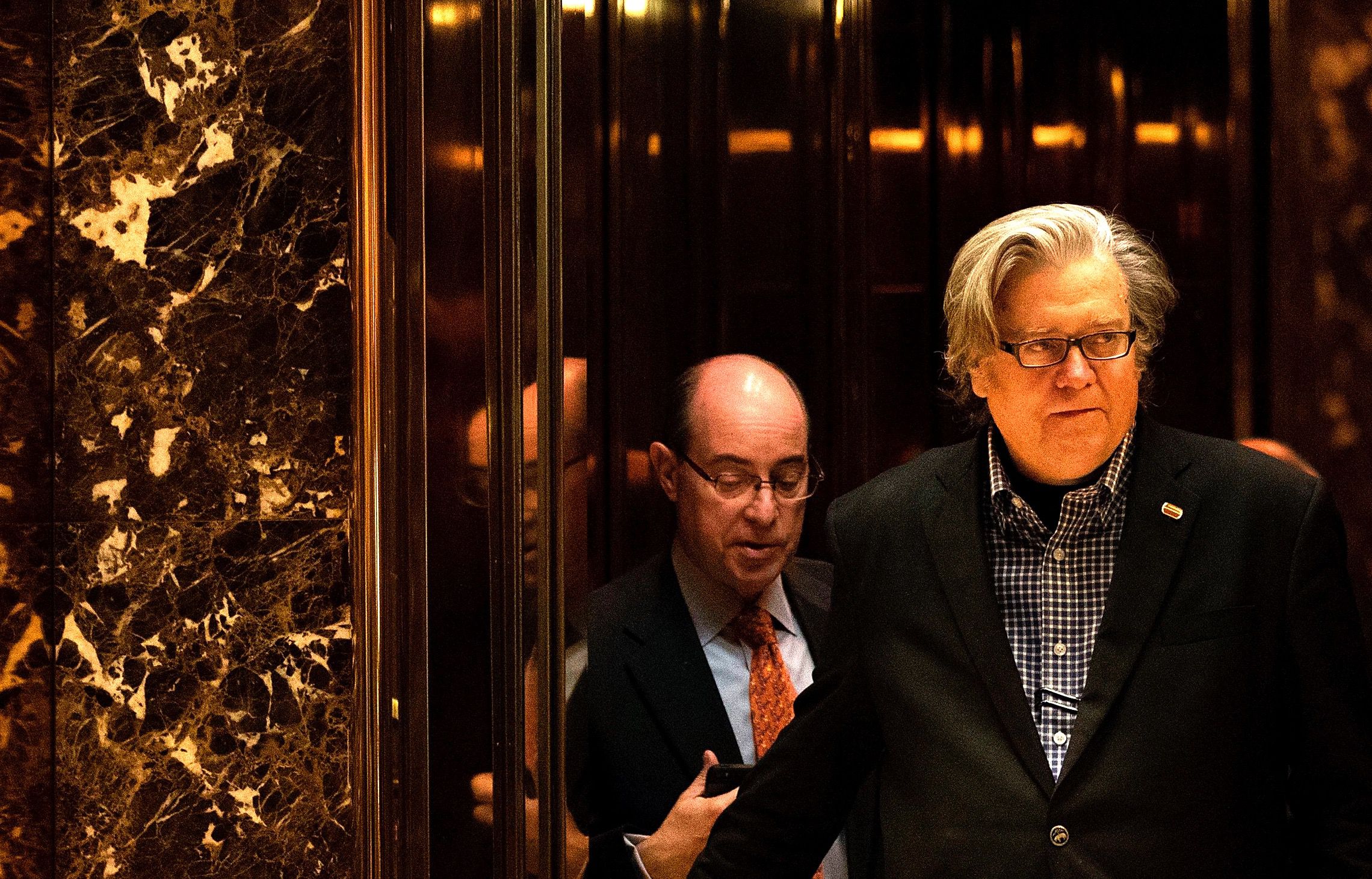 “In the years before he became a top adviser to President Trump and a leading West Wing advocate for the executive order temporarily halting entry into the United States from seven majority-Muslim countries, Miller was developing his skills as a culture warrior and conservative provocateur eager to condemn liberal orthodoxy — particularly on matters of race and identity. Like Trump, Miller forged that identity while immersed in liberal communities, giving him cachet with fellow conservatives for waging his battles on opposition turf.”

“Starting as a teenager, with his frequent calls to the nationally syndicated “Larry Elder Show,” Miller made a name for himself in conservative media circles for his willingness to take controversial stands and act as a champion for those on the right who felt maligned by a culture of political correctness.”

“He produced a canon of searing columns on race, gender and other hot-button issues and, at Duke, became known to Fox News viewers as a leading defender of the white lacrosse players wrongfully accused of raping a black stripper. By his late 20s, Miller was a key aide to then-Sen. Jeff Sessions (R-Ala.), helping to torpedo a long-sought goal of immigrant advocacy groups to put millions of unauthorized Hispanic immigrants on a path to citizenship.”

“Today, at 31, he has emerged alongside former Breitbart News chief Stephen K. Bannon as a chief engineer of Trump’s populist “America first” agenda that has roiled the Washington debate over immigration and trade and sparked alarm among traditional U.S. allies abroad.”

“Miller, whose White House title is senior adviser to the president for policy, has been at Trump’s side for more than a year, joining his campaign in January 2016 when Sessions, who was sworn in Thursday as attorney general, was one of the only Republican officials to endorse the businessman’s candidacy.”

“While Trump at times revamped his campaign leadership, with Bannon joining relatively late in August 2016, Miller remained a steady presence whose profile and influence grew over time.”

“He wrote some of Trump’s most strident speeches during the campaign, including his Republican National Convention acceptance address in which Trump declared that “nobody knows the system better than me, which is why I alone can fix it.”

“And Miller sometimes served as the warm-up act for Trump at his large campaign rallies, including a rip-roaring speech in Wisconsin during the Republican primary when Miller thrashed Trump’s chief rival, Sen. Ted Cruz (R-Tex.), for supporting increases in legal immigration that would result in more Muslims entering the country — a position Miller charged that Cruz held with “no regard, no concern” for how it would “affect the security of you and your family.”

“After reports of Miller’s central role crafting the order imposing a 90-day ban on citizens of Iraq, Syria, Iran, Libya, Somalia, Sudan and Yemen from entering the United States, the young aide has drawn uncomfortable new scrutiny. MSNBC’s Joe Scarborough, host of the “Morning Joe” program that is a Trump favorite, recently blasted Miller as a “very young person in the White House on a power trip thinking that you can just write executive orders and tell all of your Cabinet agencies to go to hell.”

“Horowitz recalls being immediately impressed with Miller. “One of the things that struck me when I became a conservative was that conservatives don’t have any fight,” Horowitz said. “They don’t have any stomach for it. . . . Stephen Miller had that from the get-go.”

“We have all heard about how peaceful and benign the Islamic religion is, but no matter how many times you say that, it cannot change the fact that millions of radical Muslims would celebrate your death for the simple reason that you are Christian, Jewish or American,” Miller (has written).

“Ari Rosmarin, a civil rights lawyer who edited the student newspaper at time, recalled that Miller was especially critical of a Mexican American student group.”

“I think he’s got a very sharp understanding of what words and issues will poke and provoke progressives, because he came up around it and really cut his teeth picking these fights that had low stakes but high offense,” Rosmarin said.”

“For Miller, though, working in the Trump White House is a natural culmination of his young career — a chance to work for a president who appears to share his zeal for getting under the skin of political opponents.”

(MSNBC’s Morning Joe) “And despite the fact that Miller’s performance earned favor with the President himself, Mika Brzezinski and Joe Scarborough were flabbergasted at Miller’s combative rhetoric against the judiciary (On Sunday talk shows).

( Example is from Fox News)“I want to say something very clearly, and this is going to be very disappointing to the people protesting the president and the people in Congress, who have attacked the president for his lawful and necessary action: The president’s powers here are beyond question,” Miller said.”

“It’s so much worse than I thought,” said Brzezinski, who used her own Twitter account late Sunday to promote the hashtag #MillerTime2Go.

“Scarborough, who previously ripped into Miller for his role in advising the executive orders on immigration, continued his brash language Monday morning 2/13. “[The President’s decisions] will be questioned my young, little Miller. They will be questioned by the Court. It’s called judicial review. Alexander Hamilton and James Madison wrote about it in the Federalist Papers. It was enshrined in Madison’s Constitution.”