It is an unpleasant  task to keep up with our republican President Donald Trump’s implementation of his executive orders, especially when these actions do real harm to the very peoples, he promised to help.

President Trump, who championed the National Rifle Association agenda as a candidate, signed a regressive measure to strike down a sensible Obama administration rule designed to stop people with severe mental health problems from buying guns .(This was quickly drawn up by the republicans in the US Congress)

This is an instance where republicans plus about six democrats placed the well being of the American peoples behind the lobbying power and monies of the National Rifle Association (NRA).

Why did the NRA push for this? The answer is that it wanted to immunize gun dealers from being successfully sued if the business knowingly sells guns to mentally ill adults.

Here is the story that explains the NRA’s motivation…

On 3/6/17 Ann E. Marimow of the Washington Post penned the following narrative, “A warning, a gun sale and tragic consequences.

She called the police. Then ATF. After that, the FBI.

“Janet Delana was desperate to stop her mentally ill adult daughter from buying another handgun.”

“Finally, Delana called the gun shop a few miles from her home, the one that had sold her daughter a black Hi-Point pistol a month earlier when her last disability check had arrived.”

“The next check was coming.”

“Her daughter had been in and out of mental hospitals, she told the store manager, and was diagnosed as a paranoid schizophrenic. She had tried to kill herself. Her father had taken away the other gun, but Delana worried that her daughter would go back.”

“Something like what I bought last time,” Colby Sue Weathers said to the manager, Derrick Dady.”

“She seemed nervous, he would recall to police.”

“Weathers had a diagnosis of mental illness, but she had never been identified as a threat to herself or others by a judge or ordered to an extended mental hospital stay — which meant she could pass the background check for her gun.he Hi-Point pistol and one box of ammunition cost Weathers $257.85 at the Odessa Gun & Pawn shop on the main drag of the small Missouri town about 40 miles east of Kansas City.”

“Weathers headed back to the house the 38-year-old shared with her parents, stopping for a pack of unfiltered cigarettes along the way at a gas station. A firefighter who was an old acquaintance saw her acting skittishly and muttering.”

“An hour after leaving the gun store, Weathers was back home where her father sat at a computer with his back to her.”

“Weathers planned to kill herself next but told a 911 operator: “I can’t shoot myself. I was going to after I did it, but I couldn’t bring myself to it.”

Delana lost Tex, her husband of nearly 40 years, and her daughter, who was charged with murder. And beneath her anguish, Delana seethed.”

“The store had made about $60 profit on the sale, court records would show.”

“After everything I did, they still sold her a gun,” Delana said recently. “The more I thought about it, the madder I got. I wanted someone to pay.”

“Delana sued the Odessa Gun & Pawn shop for negligence in the June 2012 sale and won a decision at the Missouri Supreme Court that said that nothing in federal law barred Delana’s type of lawsuit. Under state law, the court ruled that dealers can be held liable if they should have known a buyer was dangerous. Last fall, with a trial set to start in January in the wrongful death case, the gun shop settled with Delana, saying it had followed the law and done nothing wrong.”

“I can’t just go by what a phone call says,” Dady said during a deposition. “If the person that comes in . . . passes the background check, I can sell them a gun.”

“Gun-control advocates say the state court’s decision, combined with Delana’s settlement, are significant victories for those who want to reduce gun violence by changing the financial equation for the firearms industry.”

“The Missouri case, brought with the help of lawyers from the D.C.-based Brady Center to Prevent Gun Violence, provides a legal road map for similar lawsuits around the country, according to the Brady Center, which said there are at least 10 other civil cases pending, including in Florida, Pennsylvania, Indiana and Texas.”

“Jonathan E. Lowy, Brady’s legal director who argued Delana’s case, said it sends a “powerful message to the gun industry nationwide, and to the companies that insure them, that if you supply a dangerous person with a gun, you will pay the price.” 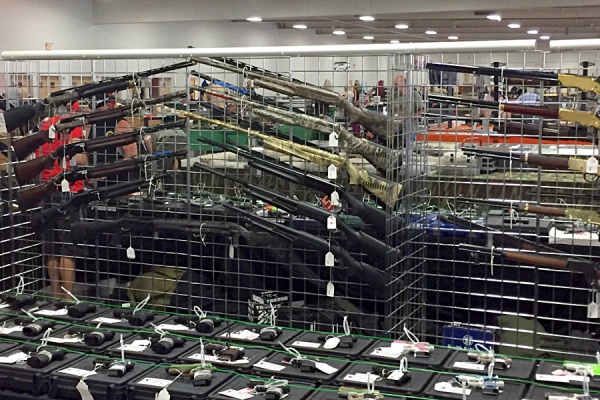 “Lawrence G. Keane, general counsel for the National Shooting Sports Foundation, said the lawsuits brought by the Brady Center and others are an effort to impose gun control through litigation instead of legislation.”

Growing up with guns

“Far from Washington, where vast fields of corn and soybeans surround a community of 800 on the bluffs of the Missouri River, the gun debate is personal.”

“Delana grew up around guns. Her father was an avid hunter. Her husband, the high school sweetheart she married when she was 17, cleaned guns on the porch.”

“A Browning pistol her husband bought still rests in the gun safe next to Delana’s bed, as much for sentiment as protection.”

“Delana doesn’t want to take guns away from everybody — just from people like her daughter who are struggling with mental illness. After a career in state government helping other people navigate Missouri’s social-services system, she is frustrated she couldn’t do more to stop her daughter from getting a gun.”

“She said she is determined to bring attention to gaps in the background check system and to expand the number of mentally ill people barred from buying firearms.”

“Even if her daughter previously had been deemed a threat by a judge, Delana has learned, there was no guarantee a background check would have caught that exclusion. The federal background check system that is used to prevent convicted felons from buying guns is missing scores of state health records that would also flag and disqualify those who are seriously mentally ill.”

“But, Delana also has learned, if the Obama regulations had been in place when Weathers bought her weapon, they would not have barred her purchase because she received and managed her own Social Security disability checks.”

“Dismantling those regulations now, her mother said, is a mistake.”

• The rules had required the Social Security Administration to share information with the FBI about those receiving federal disability payments because of a mental illness — and unable to manage their finances — to ensure that their names were flagged in firearms dealers’ routine background checks.

• The Protection of Lawful Commerce in Arms Act provides unique legal protections for firearms manufacturers, distributors and retailers. Passed by Congress in 2005, the law bars most civil lawsuits seeking to hold the industry accountable after the products it sells are misused, including in mass shootings.

• Supporters of the law say it has prevented frivolous lawsuits and includes exceptions for knowingly illegal sales. Opponents say those exceptions are narrow. Efforts to change or repeal the law, including last year, have not gained traction in a Republican-controlled Congress.