I have been writing about how the republicans have been the catalyst for the Obamacare failures that they knowingly caused, as a talking point today, to argue for its repeal and replacement.

It is no secret that the healthcare insurance industry executives have not viewed the enactment ACA favorably. And so, somehow, the healthcare insurance experts with the assistance of republicans came up with the concept of calling the ACA risk corridors underwriting as the equivalent of a company bailout. This is a falshood. Reinsurance and “risk corridors” are standards in the insurance industry. Not funding this part of the ACA, in 2016 guaranteed that this program would incur the complaints, we are all hearing about in 2017, like higher premiums and deductibles; with insurance companies withdrawing from certain markets.

Because of adverse selection which is an insurance term used to describe that too many sick people are being covered by ACA without sufficient numbers of young, healthy adults also being enrolled to spread the risk, the health insurance companies have suffered unexpected losses. Responsible funding of “risk corridor” coverage would mitigate these losses, but without it, future failures for ACA were inevitable. This was like legislating for death sentence or death spiral for the ACA..

The legislator who claims to have successfully led the fight against the US Congress adequately funding of the ACA risk corridors while using the terminology of not supporting a bailout for the insurance business is none other than the Florida senator, Marco Rubio. But it was other legislators led by then Senator Jeff Sessions who did the quiet back door work.

This is a link to a Politifact report which calls Senator Rubio’s claim a lie, that funding risk insurance corridors for the Affordable Healthcare Act (ACA) is equivalent to a corporation bailout. (Marco Rubio: We ‘wiped out’ Obamacare ‘bailout fund’)

As per a 12/15/16 Modern Healthcare report, “The risk-corridor program was established under the ACA to help offset insurer losses in the first three years of the insurance exchanged. The program, which expires at the end of the year (2016), was designed to discourage insurers from hiking premiums because of uncertainty in who would enroll in their plans. It works by requiring profitable insurers to pay funds into the program, while plans with higher medical claims receive money. A similar risk-corridor program exists in Medicare Part D, which was created by Republican President George W. Bush.”

“But the ACA’s program hasn’t worked as planned. The gap between what some insurers are paying in and what others are requesting is widening. Congress in 2014 passed a provision in the 2015 federal budget requiring risk corridors to be revenue-neutral, so the CMS (Centers for Medicare & Medicaid Services), can only dole out what it takes in. In October 2015, the CMS said it would pay just 12.6% of the risk-corridor requests for 2014. The rest of the payments would be paid from 2015 and 2016 collections.

According to a 12/18/16 CMS report, “HHS established a three-year payment framework for the risk corridors program and outlined the details of this payment framework in our April 11, 2014 guidance on Risk Corridors and Budget Neutrality.”

In summary, CMS is reporting that insurers are owed more than $5.8 billion in net risk-corridor payments for 2015 alone, and this is on top of the $2.5 billion shortfall to cover insurers’ 2014 losses.

On 12/17/15, Eric Planin of The Fiscal Times, wrote a report on this issue. The author is a Washington Editor and D.C. Bureau Chief as well as a veteran journalist who has covered the federal government, congressional budget and tax issues, and national politics. He spent over 25 years at The Washington Post.

The following are excerpts from this article, “Congress Weakens Obamacare by Limiting ‘Bailout’ Funds for Insurers.”

“The $1.1 trillion omnibus spending bill headed for approval in the House on Friday (December 2015) contains yet another GOP blow to the Affordable Care Act. This one blocks administration efforts to bolster a special fund created under the law to compensate insurance companies for excessive losses due to a disproportionate share of very sick or elderly enrollees.”

House Republicans endeavored to prevent additional billions in funding for the so-called risk corridor program (in the 2016 Omnibus bill). It was a plan to cripple the national health insurance program Republicans have vowed to repeal and replace. Indeed, the tactic has been having an effect, as roughly half of the 23 non-profit insurance plans created under the 2011 Affordable Care Act at a cost of $2.4 billion have announced they will close their doors by the end of this year, largely because of inadequate compensation for unexpected losses.”

“Rubio, a GOP candidate for president, has denounced the risk corridor program as a costly corporate bailout that cannot be justified.” “Alice Rivlin, a former White House budget director and head of the Congressional Budget Office said on Thursday that the new congressional action is “very unfortunate” and will further damage the health insurance program.”

“It’s forcing the government to renege on its promise to share the risk, and it has been damaging to weaker insurance companies and especially the co-ops – some of which have gone under already,” she said.”

“Jay Courtney, a spokesperson for (AHIP), a leading health insurers advocacy group, said, “The latest budget deals do nothing to address the recent funding shortfall with the risk corridors program or make up for the losses facing health plans in the exchanges.”

“The program was conceived as an insurance policy of sorts for major insurers who miscalculated in projecting how many of their enrollees would be young and healthy – and thus unlikely to make big demands on their coverage – and older and sicker enrollees who would require costly medical attention and prescription drugs.” “The approach was intended to minimize the risk that insurers faced in setting their premiums and deductibles while complying with ACA requirements to accept enrollees with pre-existing medical conditions and adhere to other constraints on their profits. Rivlin, a policy expert with the Brookings Institution, recalled that during deliberations over the Obamacare legislation, insurance companies “were reluctant, because they weren’t familiar with this population of people who hadn’t previously had insurance.”

“The insurers would be required to pay into a pool if their revenues and profits far exceeded their projections while the federal government would pay in when insurers’ revenues lagged far behind their projections. This was one way the Obama administration enticed insurers to take part in Obamacare, even though Rubio and others said it was inappropriate.”

“A similar risk corridor program was set up for the pharmaceutical industry when President George W. Bush pushed through enactment of the Medicare Part D prescription drug program in 2003.”

“Last year (2014), the insurance companies paid just $362 million into risk corridor program while submitting $2.87 billion in claims for reimbursement. But the Republicans amended a spending bill to prevent the Department of Health and Human Services from transferring discretionary funds to (bolster) the program. The fiscal 2015 budget package approved (2014) specified that payments made to insurers under the risk corridors could not exceed collections. That is why the DHH’s payouts this year were equivalent to just 12.6 percent of the claims.” 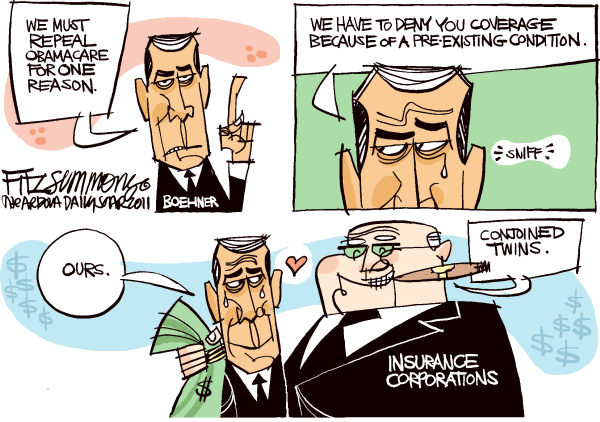 “The 2016 omnibus spending bill awaiting final approval by Congress once again bars the Obama administration from shifting funds to beef up the risk corridors program. A GOP summary of the spending package praised last year’s action for being able to save over $2.5 billion from potentially being transferred out of priority HHS discretionary spending. It also said that Congress will continue to insist that the risk corridor fund be kept “budget neutral” –meaning no shifting of funds.”

“The (2016) omnibus spending bill also imposes a two-year delay in implementation of a new tax on high-end, employer provided health insurance plans and a tax on the medical devices industry and postpones for one year another tax on health insurers.”