It is helpful for those following the republican President Donald Trump’s Russian saga, to know that the friendships among Roger Stone, Paul Manafort and the president go back for decades. Roger Stone and Paul Manafort used to be business partners. It is illuminating to get to know the character of the kind of folks, our president had an association.

Here is the rest of the story about these three men’s ties to each other...

On 4/28/16. Franklin Foer of Slate penned a report on the connections among these three men in the following report, “The Quiet American.”

“The genesis of Donald Trump’s relationship with Paul Manafort begins with Roy Cohn. That Roy Cohn: Joe McCarthy’s heavy-lidded henchman, lawyer to the Genovese family. During the ’70s, Trump and his father hired Cohn as their lawyer to defend the family against a housing discrimination suit. (Cohn accused the Feds of using “Gestapo-like tactics.”) But Cohn and Trump became genuine pals, lunching at the Four Seasons and clubbing together at Studio 54. It was Roy Cohn who introduced Stone and Manafort to Trump.” 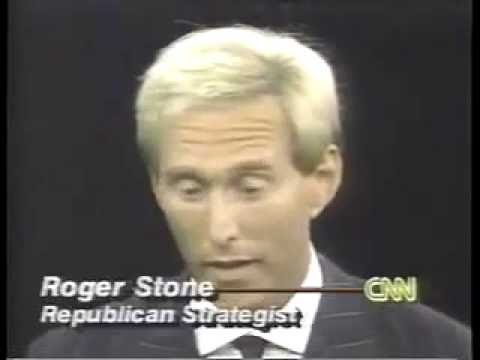 “During those disco years, Stone and Manafort were tethered together. They were both kids from Connecticut, attending colleges in Washington, though they couldn’t have been more different. Stone loved attention and garnered it with theatrical flair. He was a bad boy, soi-disant. As a student at George Washington University, Stone moonlighted for the Nixon campaign and gravitated to Jeb Magruder, deputy director of the Committee to Re-Elect the President.”

“Dirty tricks came naturally to Stone. He assumed a pseudonym and made contributions on behalf of the Young Socialist Alliance to one of Nixon’s potential challengers. He hired spies to infiltrate the McGovern campaign. Stone wasn’t shy about his handiwork.”

“In fact, he wasn’t shy about anything. He loved to sit for interviews and vamp. Stone is a bodybuilding fanatic who posed shirtless in the New Yorker. The photo captured his implanted hair, but not the tattoo of Richard Nixon on his back.”

“Manafort had a very different mentor. He studied under the future secretary of state, James A. Baker III, who wielded his knife with the discipline of a Marine and the polish of a Princetonian. It was a good fit for Manafort, who shared his mentor’s pragmatic conservatism and his thirst for politics. (His father spent six years as the mayor of New Britain, Connecticut, a Republican who flourished in Democratic terrain.)”

“Baker, an avid collector of young talent, had managed Gerald Ford’s re-election campaign. That’s where he spotted Manafort and anointed him aide de camp. When Baker needed his own manager for his 1978 campaign to become attorney general of Texas, he tapped Manafort. The experience of whispering in Baker’s ear left a lasting impression. “Paul modeled himself after Baker,” one of his friends told me.”

“Despite his Yankee stock, Manafort ran Reagan’s Southern operation, the racially tinged appeal that infamously began in Philadelphia, Mississippi, the hamlet where civil rights activists were murdered in 1964. The success of the 1980 campaign gave Stone and Manafort cachet. More important, they helped run Reagan’s transition to power. They stocked the administration, distributing jobs across the agencies and accumulating owed favors that would provide the basis for their new lobbying business. They opened their doors in 1981.”

“Manafort and Stone pioneered a new style of firm, what K Street would come to call a double-breasted operation. One wing of the shop managed campaigns, electing a generation of Republicans, from Phil Gramm to Arlen Spector. The other wing lobbied the officials they helped to victory on behalf of its corporate clients. Over the course of their early years, they amassed a raft of blue-chip benefactors, including Salomon Brothers and Rupert Murdoch’s News Corp.”

“Another early client was Donald J. Trump. What Trump wanted was help fending off potential rivals to his Atlantic City casino business. He especially feared the rise of Indian gaming. As the 2016 campaign has graphically illustrated, Trump doesn’t treat rivals gently. Testifying before a congressional committee in 1993, he began with his rote protestations of friendship. “Nobody likes Indians as much as Donald Trump.” He then proceeded to worry that the tribes would prove unable to fend off gangsters. “There is no way Indians are going to protect themselves from the mob … It will be the biggest scandal ever, the biggest since Al Capone … An Indian chief is going to tell Joey Killer to please get off his reservation? It’s unbelievable to me.”

“Trump poured money into a shell group called the New York Institute for Law and Society. The group existed solely to publish ads smearing his potential Indian competition. Under dark photos of needles and other junkie paraphernalia, the group asserted,  “The St. Regis Mohawk Indian record of criminal activity is well documented.” (It wasn’t.) “Are these the new neighbors we want?” We know that Trump and Stone were behind the New York Institute because Gov. George Pataki investigated its doings. He slapped Trump and Stone with a $250,000 fine and required them to publicly apologize for running the ads.”

“Manafort didn’t own the Trump account at the firm. But one of his former partners told me that he would dispense advice and pitch in, winning Trump’s trust. When Manafort took an apartment in Trump Towers in 2006, he would kibitz with his old client when they’d run into one another on the elevator. “Trump knew this guy was top drawer,” says one Republican operative.”

“Manafort and Stone built a glamour firm. The Black in its name belonged to Charles Black, who as a 25-year-old launched the Senate career of Jesse Helms. Later, they lured Lee Atwater, the evil genius who would devise the Willie Horton gambit for George H.W. Bush. The firm had swagger.” “In the early ’80s, the partners spoke openly to the Washington Post of their annual $450,000 salaries. According to the consultant Ed Rollins, Black would later boast that the firm had schemed to gain cartel-like control of the 1988 Republican presidential primary. They managed all of the major campaigns. Atwater took Bush; Black ran Dole; Stone handled Jack Kemp. A congressional staffer joked to a reporter from Time, “Why have primaries for the nomination? Why not have the candidates go over to Black, Manafort and Stone and argue it out?”

“Manafort actively avoided the spotlight, though he had a knack for garnering unwanted attention. He took on clients and causes that even most of his colleagues on K Street considered outside the usual bounds. Black, Manafort, and Stone hired alumni of the Department of Housing and Urban Development then used those connections to win $43 million in “moderate rehabilitation funds” for a renovation project in Upper Deerfield, New Jersey. Local officials had no interest in the grants, as they considered the shamble of cinder blocks long past the point of repair.”

“The money flowed from HUD regardless, and developers paid Manafort’s firm a $326,000 fee for its handiwork. He later bought a 20 percent share in the project. Two years later, rents doubled without any sign of improvement. Conditions remained, in Mary McGrory’s words, “strictly Third World.”

“It was such an outrageous scam that congressmen flocked to make a spectacle of it. Manafort calmly took his flaying. “You might call it influence-peddling. I call it lobbying,” he explained in one hearing. “That’s a definitional debate.”

“Strangely, the HUD scandal proved a marketing boon for the firm. An aide to Mobutu Sese Seko told the journalist Art Levine, “That only shows how important they are!” Indeed, Manafort enticed the African dictator to hire the firm. Many of the world’s dictators eventually became his clients. “Name a dictator and Black, Manafort will name the account,” Levine wrote. (Levine’s piece, published in Spy, featured a sidebar ranking the ethical behavior of Washington lobbyists: It found Black, Manafort the worst of the bunch.) The client list included Philippine strongman Ferdinand Marcos (with a $900,000 yearly contract) and the despots of the Dominican Republic, Nigeria, Kenya, Equatorial Guinea, and Somalia. When the Center for Public Integrity detailed the firm’s work, it titled the report “The Torturers’ Lobby.”

“Indeed, the firm was an all-purpose image-buffing operation. As the Washington Post has reported, Manafort could book his clients on 60 minutes  or Nightline —and coach them to make their best pitch. He lobbied Congress for foreign aid that flowed to his clients’ coffers. He might even provide a few choice pieces of advice about tamping down domestic critics. Manafort understood the mindset of the dictator wasn’t so different from his corporate clients. According to one proposal unearthed by congressional investigators, the firm boasted of “personal relationships” with administration officials and promised “to upgrade back-channels” to the U.S. government.”

“This wasn’t empty rhetoric. On a Friday in 1985, Christopher Lehman left his job at the National Security Council. The following Monday, he was flying with Manafort, his new boss, to the bush of Angola to pitch the Chinese-trained guerilla who wanted covert assistance from the U.S. to bolster his rebellion against Angola’s Marxist government. Savimbi briefly left a battle against Cuban assault forces and signed a $600,000 contract.”

“The money bought Savimbi a revised reputation. Despite his client’s Maoist background, Manafort reinvented him as a freedom fighter. He knew all the tricks for manipulating right-wing opinion. Savimbi was sent to a seminar at the American Enterprise Institute, hosted by the anticommunist stalwart Jeanne Kirkpatrick, a reception thrown by the Heritage Foundation, and another confab at Freedom House. (Kirkpatrick introduced Savimbi, who conscripted soldiers, burned enemies, and indiscriminately laid land mines, as a “linguist, philosopher, poet, politician, warrior … one of the few authentic heroes of our time.”)

“Manafort’s campaign worked wonders. His lobbying helped convince Congress to send Savimbi hundreds of millions in covert aid. Indeed, every time Angola stood on the precipice of peace talks, Manafort, Black worked to generate a fresh round of arms—shipments that many experts believe extended the conflict. Sen. Bill Bradley was blunt in assigning blame. “When Gorbachev pulled the plug on Soviet aid to the Angolan government, we had absolutely no reason to persist in aiding Savimbi. But by then he had hired an effective Washington lobbying firm, which successfully obtained further funding.” Or as Art Levine concluded, “So the war lasted another two more years and claimed a few thousand more lives! So what? What counts to a Washington lobbyist is the ability to deliver a tangible victory and spruce up his client’s image.”