aside Why Is Rep. Nunes (R-CA) Acting So Erratic?

It seems that when the US House Representative Devin Nunes held his press conferences on Wednesday (3/22/17) about having viewed intelligence data which troubled him and which seemed to him, to be unfair to the republican President Donald Trump, he forgot to mention that he had studied this material at the White House. He says that he went to the White House’s secure location to meet with his source because the computers there, make it easier to pull up sensitive data and these computers are not available in the US congressional building.

On 3/27/17 David A. Graham of The Atlantic penned the following news item, “The Ever-Deepening Mystery of Devin Nunes.”

“As House Intelligence Committee chairman, Representative Devin Nunes’s job is to oversee American spycraft. But Nunes’s own actions over the last few days suggest more the cloak-and-dagger actions of a would-be John Le Carré character than those of a sober government investigator.”

“Amid accusations from Democrats on the panel that Nunes is acting as a surrogate for the Trump administration, CNN revealed Monday that Nunes was seen on the White House grounds on Tuesday, the day before he announced he had new and important information about surveillance of Trump transition team figures by the intelligence community.”

“Nunes told CNN he was there “to confirm what I already knew” and that he needed a secure location to view intelligence information, and his spokesman gave a similar statement to NBC News.  Nunes also said that no administration officials knew he was there. That claim, like many of Nunes’s statements so far, raises at least as many question as it answers.”

“Since Wednesday’s (3/22/17) bombshell, the story has gotten only weirder. Nunes’s own claims, already difficult to pin down, have become only more enigmatic, while the focus has shifted to how exactly the California Republican obtained whatever documents he’s citing, and whether the White House was involved.””Nunes’s announcement was curious for several reasons, including the fact that by his own admission he did not yet have full information; his decision to take the partial information he possessed to the White House to brief President Trump, without informing other members of the committee first; and the fact that even as he railed against improper revealing of intelligence information, he was hastily releasing this.” “The next few days saw an escalating war of words between Nunes and committee Democrats. On Thursday, Nunes apologized to Democrats for not informing them, but later said he had would have done things the same way again. That night he told Sean Hannity he had “a duty and obligation” to brief the president “because as you know he’s taking a lot of heat in the news media,” which is at odds with his supposed role as an independent investigator. On Friday, he precipitously canceled an open committee hearing scheduled for Tuesday, infuriating Democratic ranking member Adam Schiff, who called for an independent commission to look into the Trump administration’s ties to Russia, and said he thought Nunes was acting in response to pressure from the White House.It’s the White House’s role, or lack thereof, that is now squarely in focus.

“The Daily Beast’s Tim Mak reported Friday evening (3/24/17)  that Nunes was in a car with a senior staffer on Tuesday (3/21/17) when he suddenly hopped out and disappeared. Nunes staffers didn’t learn anything more before Nunes’s dramatic announcement on Wednesday. They had no idea what he planned to say until he said it. (He told reporters about his new information at the Capitol, then left for the White House, briefed the president, and then held a second presser there.)” (Note: What’s missing here is that at his 1st press interaction, he mentioned that he had just talked to the US House Speaker, Paul Ryan.)
“Nunes is legally required to visit a secure facility to view classified information. The Washington Post reported Monday (3/20/17) that “Congressional officials said that the director of National Intelligence, the FBI and National Security Agency had all indicated that they got no late-night visit from Nunes, a trip that probably would have been entered in security logs.””CNN filled in some of the missing period: Nunes apparently got into an Uber and went to the White House complex.”

“But why did Nunes need to go to the White House to see the information? There are secure facilities at the Capitol. Nunes has refused to say whether his revelations came from White House officials, saying will not confirm or deny anything about his source. How does he know that no administration figures knew he was at the White House Tuesday? (Clearly, someone saw him and tipped off CNN. Who else did?) If Nunes entered and left alone, as CNN’s source said, who was there, if not an administration official?””Even if Nunes’s reasons for viewing the information on the White House grounds are entirely innocent, they were politically foolhardy. With his late-night escapades and questionable explanation for his visit, he has fed speculation that he is working in concert with the White House and attempting to help the president. The groundwork for that idea had been laid by his hasty briefing for Trump, his comments to Hannity, and his confusing cancellation of the upcoming briefing, though, as the Post reports, Nunes has long been a close ally of the president’s and was on the transition team he now says was subject to surveillance. Although Nunes said the new information does not validate Trump’s accusation—offered with no evidence—that President Obama surveilled him, the administration has claimed it as vindication.” 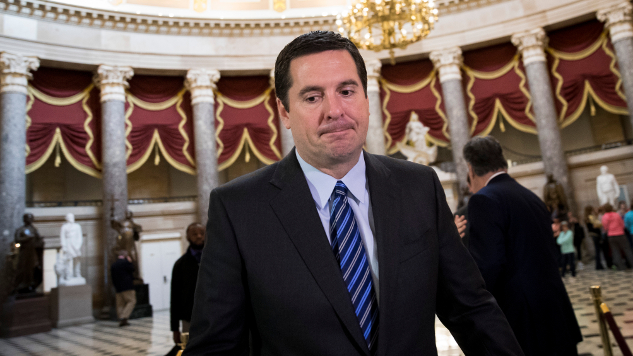 “Some of Nunes’s allegations are already looking dubious. He has acknowledged that all of the information to which he has referred was legally collected, though he expressed concern that the names of Trump transition team members were not adequately redacted. But he has since said he cannot be sure that any transition team members were even directly caught up in surveillance, or whether they simply may have been mentioned.”

“Meanwhile, Nunes cannot or will not answer most of the questions about his information, citing classified-information rules. Like a spy-novel character in over his head, Nunes’s inability to answer pointed questions has placed him in an impossible situation.”