aside Professor Lichtman Is Predicting The President’s Impeachment

There is an American University Professor Allan Lichtman who has been accurately predicting the American presidential elections’ outcomes for the past 30 years with a system not based on polls. In early November 2016, he was the sole pundit to predict Donald Trump’s victory, but unfortunately, his was the voice proven to be right. Now, he is getting media coverage because of his recently published book, “The Case For Impeachment,” by which he is predicting the impeachment of the president within his first term.

As per a 11/9/16 Washington Post Article by Peter W. Stevenson, “Not a lot of people predicted a Trump win before Election Day. But Allan Lichtman, author of “Predicting the Next President: The Keys to the White House 2016,” insisted that his historically based system for predicting elections pointed to a Trump win – and it looks like he was right (though it’s important to point out, his system has correctly predicted the popular vote in each election – he picked an Al Gore win in 2000, and it looks like Hillary Clinton could win the popular vote and lose the electoral college this year).

“If you aren’t familiar with his somewhat unique prediction system, here are the basics: The keys to the White House, he says, are a set of 13 true/false statements. If six of them are false, the incumbent party loses the presidency. His system has correctly predicted the winner of the popular vote in every U.S. presidential election since 1984. Our first interview went into the keys more in-depth, and in September he said the keys were settled enough to make an official prediction of a Democratic loss and a Trump win.”

“The Fix caught up with Lichtman again to find out more. Our conversation is below, edited only for length and clarity.”

THE FIX: “Readers can learn a lot about the keys from the previous interviews we’ve done, but let’s remind people of the quick version: Your system for predicting the outcome of the election stays away from polls, electoral college maps and candidates’ histories in favor of a more broad historical evaluation.”

LICHTMAN: “The 13 keys are a historically based prediction system that were founded on the study of every presidential election from 1860 to 1980, and I’ve since used them prospectively to predict, often well ahead of time, the results of all eight elections from 1984 to 2012. The keys basically assess the strength and performance of the party holding the White House. There are 13 keys. An answer of true on these true/false questions always favors the reelection of the party in power. And if six or more of the 13 keys are false, the party in power, the party holding the White House, is the predicted loser — any six or more.”

“The first time we talked, you weren’t willing to predict a winner. Take me through that process and how you came to predict a Trump win.”

“Early on, the keys were inconclusive. That is, remember, six or more and the party in power is the predicted loser. And for some time, there were five keys out against the incumbent Democrats.”

“And since that time, as we discussed last time, that sixth key has turned against the Democrats, and that is the third party key, and that is based on an assessment that you would expect the third party candidate, in this case the Libertarian candidate, Gary Johnson, to get five percent or more of the vote. That’s a big sign of discontent with the party holding the White House. And so, again on the knife edge, you had exactly six fatal keys against the incumbent Democrats.”

“ But it didn’t change a key. By the narrowest of possible margins, the keys still point to a Trump victory.”

But as per a 4/18/17 CBC World News Report, “Prediction prof’ who called Trump’s win now predicts his impeachment, but scholars aren’t convinced,” by Matt Kwong, “If the president was happy with Lichtman’s analysis then, he might not be so thrilled with this next prediction: “the prediction of impeachment,” as Lichtman calls it. He expects the House of Representatives will formally vote that the Senate should try, convict, and remove the President from office within his first term.”

Unlike his 13 “keys to the White House” algorithm for picking future presidents, Lichtman’s new book, The Case For Impeachment, lays out eight “grounds for impeachment” that are not based on a mathematical system but what Lichtman describes as a “deep study of the history” of impeachments and Trump’s own history. ”

“His new deduction has made a splash by virtue of who Lichtman is. When political statisticians came to a near-universal conclusion in the lead-up to last year’s election that Clinton would handily defeat Trump, Lichtman was a conspicuous holdout.”

To some, Lichtman’s argument for impeachment proceedings is made all the more compelling by his track record. He considers his streak of predicting popular-vote winners to be unbroken since 1984. He predicted Al Gore would win the 2000 election — a call that he hung on the importance of the popular vote, which he acknowledges is no longer important in razor-thin elections. “To say I was flatly wrong in 2000 is ridiculous,” he said.

Predicting an impeachment, though? That’s a different beast than forecasting an election, say constitutional experts.

“It’s just not that simple,” says Susan Low Bloch, one of the 19 constitutional scholars who testified before the 1998 House judiciary committee on the impeachment of president Bill Clinton. The impeachment process was “supposed to be really hard” by design, she says, because the very act of impeachment seems so undemocratic.” 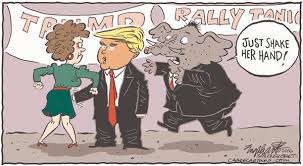 “You are undoing a national election, and I can’t think of anything more serious politically than undoing an election,” Bloch said. “Whether you like Trump or not, he’s now the president until he’s done something impeachable — which he hasn’t, so far as we know.”

“The history of impeachments runs shallow. Only two out of the previous 44 presidents have been subjected to the constitutional remedy for a president’s wrongdoing: Andrew Johnson in 1868 and Clinton in 1998. Both were acquitted by the Senate and remained in office.”

“Impeachment is not synonymous with removal from office, which only occurs once the impeached party is convicted in the Senate by a two-thirds “supermajority” vote. Republicans currently have control of 52 of the seats in the 100-seat chamber.”

“Lichtman, slicing the data another way, argues impeachment is “not as rare as we think.” Counting Richard Nixon, who would likely have been impeached over Watergate had he not resigned in 1974, Lichtman says “one out of 14 presidents have been impeached.”

“Still, to initiate impeachment proceedings in the House would require overwhelming public support for legislators to consider forming the judiciary committee.”

“The committee would have to find the person has committed specific articles of impeachment — treason, bribery or “high crimes or misdemeanors,” a catchall term vague enough to permit impeachment “even in the least appropriate cases,” says Harvard University Constitutional law professor Laurence Tribe, like “the garden-variety offence” of lying under oath about a prior sexual affair.”

“Republicans used the “high crimes” reasoning in 1998 to impeach a Democrat on perjury and obstruction of justice after Clinton lied about his affair with Monica Lewinsky. But Trump belongs to the same party that controls Congress.”

“It would be tricky for Trump to be impeached in a Republican-majority House,” Tribe says, noting that Lichtman’s prediction assumes that either the Democrats will win control of the House in the November 2018 mid-term elections and are convinced Trump needs to go, “or that there will be a scandal … so earthshaking that even Republicans including Speaker Ryan will turn on their own before the mid-term elections.”

“Presumably such a scandal would involve “treasonous collaboration with Russia to steal the presidency,” he says.”

“Lichtman’s impeachment argument comes down to eight concerns, from Trump’s flouting of laws such as the Fair Housing Act in the 1960s, to business conflicts of interest that might run afoul of the emoluments clause, to what he calls “the Russia connection,” which he believes could be a potentially treasonous offence.”

“Perhaps the most innovative of my grounds is the ‘crime against humanity,’ which we typically associate with genocide,” Lichtman says, hanging his argument on the International Criminal Court’s prioritization of crimes against the environment as acts that could threaten human well-being and survival.”

“What Licthman is still missing to strengthen his case for impeachment is hard proof of wrongdoing, Bloch argues. Speculation and conjecture about Trump’s Russia connections won’t cut it in a Senate trial.”

“She says. “If Trump would ever reveal his taxes, we would find out more, and if we find out more about the election and the Russian hacking, there’s something maybe there, but I don’t think there’s anything there right now.”

“Lichtman nevertheless expects things to go the way he predicts for a president he sees as eminently impeachable.”

“I just don’t think he has the temperament, the history or the qualifications to be president,” he says.”