aside Connections Between Deutsche Bank, Russia And Our President, Part X (Nigel Farage)

Nigel Farage is the politician who spearheaded the campaign to have Great Britain leave the EU European Union in 2016. Obviously he is a fan of the republican President Donald Trump and vice versa. And so what was he doing visiting the Ecuadorian Embassy in March 2017 which has provided the WikiLeaks founder Julian Assange with safe haven?

On 4/23/17, Carole Cadwalladr of The Guardian penned the following report, “When Nigel Farage met Julian Assange, Why did Ukip’s ex-leader want to slip in unnoticed to meet the WikiLeaks chief at the Ecuadorian embassy?”

On March 9, 2017, an ordinary Thursday morning, Ian Stubbings, a 35-year-old Londoner, was walking down the street near his office in South Kensington when he spotted a familiar face. He turned and saw a man entering the redbrick terrace which houses the Ecuadorian embassy, where the WikiLeaks founder Julian Assange has been holed up since 2012. And the familiar face? It was Nigel Farage, the man who spearheaded Britain’s exit from the European Union.

“I thought ‘hang on a moment’,” Stubbings says. “‘That looks a bit dodgy.’ I knew the building was the embassy because I often see camera crews outside. But there was no one else around. I was the only person who’d seen him. And I didn’t know what the significance was – and I still don’t actually – but I thought: that’s got to be worth telling and I was the only person who’d witnessed it.”

So, at 11.22am, he tweeted it. His handle is @custardgannet and he wrote: “Genuine scoop: just saw Nigel Farage enter the Ecuadorian embassy.” Moments later, a reporter from BuzzFeed, who happened to follow him on Twitter, picked it up and tweeted him back, and Stubbings told her: “No press or cameras around.”

“No press or cameras around, that is, until BuzzFeed turned up just in time to catch Farage leaving, 40 minutes later. “Nigel Farage Just Visited the Ecuadorian Embassy in London,” the headline said. “Asked by BuzzFeed News if he’d been visiting Julian Assange, the former Ukip leader said he could not remember what he had been doing in the building.”

“And that was how the world found out, by accident, that the founder of WikiLeaks, the organisation which published Hillary Clinton’s leaked emails – a decisive advantage for Donald Trump’s campaign – and Farage, a friend of Donald Trump, were mutually acquainted.

“In Britain, we routinely treat Farage as if he were Widow Twankey in the national pantomime that is Ukip politics. And Widow Twankey dropping by on the man who lives in the Ecuadorian embassy’s broom cupboard seemed just one more weird moment in the weird times in which we now live; six weeks on, it had faded into yet another episode in the surreality show that now passes for normality.”

“But in a week that saw two major developments on both sides of the Atlantic regarding the respective roles that Assange and Farage played in the US election and the EU referendum – the same week in which a UK general election was announced – it is an attitude that needs urgent re-examination.”

“For if you were to pick three individuals who had the most decisive impact on that most decisive of years, 2016, it would be hard to see beyond Trump, Assange and Farage. What was not known until Ian Stubbings decided to go for an early lunch is that there is a channel of communication between them.”

“Last week brought this more clearly into focus. Because in a shock development last Thursday (4/20/17), the US justice department announced it had prepared charges with a view of arresting Assange. A day later, the Electoral Commission announced it was investigating Leave.EU – the Brexit campaign Farage headed.

“Significantly, the commission said its investigation was “focused on whether one or more donations – including of services – accepted by Leave.EU was impermissible”.

“One of the grounds on which a donation can be deemed “impermissible” is that it comes from abroad. A fundamental principle of British democracy and our electoral laws is that foreign citizens and foreign companies cannot buy influence in British elections via campaign donations.”

“Robert Mercer, the billionaire hedge fund owner, bankrolled the Trump campaign and his company, Cambridge Analytica, the Observer has revealed, donated services to Leave.EU. If this issue forms part of the Electoral Commission investigation, this isn’t just a case of possibly breaking rules by overspending a few pounds. It goes to the heart of the integrity of our democratic system. Did Leave.EU seek to obtain foreign support for a British election? If so, does this constitute “foreign subversion”? 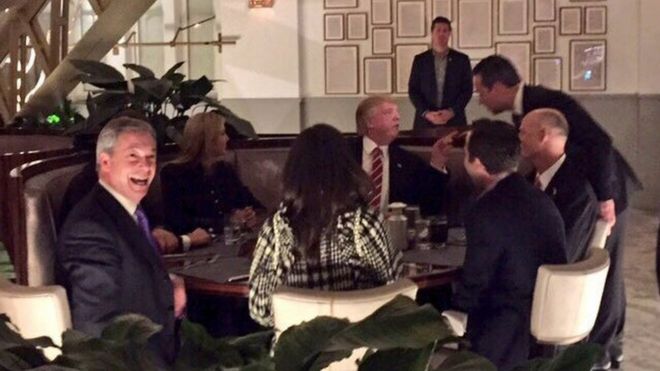 “What did or didn’t happen on March 9 may perhaps reveal clues to understanding this. To unraveling the links between WikiLeaks, the UK and the Trump administration – an administration embroiled in ever deeper connections to the Russian state. Between Trump – whose campaign was funded by Mercer and who came to power with the help of the same analytics firm now under investigation for its work with Leave.EU – and Brexit.”

“And March 9 was the day that all these worlds came together – when the cyber-libertarian movement that Assange represents collided headfirst with the global right-wing libertarian movement that Farage represents. When Nigel Farage tripped down the steps of the Ecuadorian embassy – a visit that he did not expect to be photographed or documented – a beam of light was shone on a previously hidden world: a political alignment between WikiLeaks’ ideology, Ukip’s ideology and Trump’s ideology that is not necessarily just an affinity. It is also, potentially, a channel of communication.”

“David Golumbia, an associate professor at Virginia Commonwealth University in the US who has studied WikiLeaks, describes it as “the moment when the lines suddenly become visible”. He says: “It was like the picture suddenly came into focus. There is this worldwide, right-wing, nationalistic movement that is counter to the EU, and this is present in the US and Europe and Russia, and we are just starting to understand how they do all seem to be in communication and co-ordination with each other.”

“In many ways, it wasn’t a surprise. There are clear ideological similarities between Assange and Farage. They have both been regulars on RT, Russia’s state-sponsored news channel. They have both been paid – indirectly by the Russian state – to appear on it. Ben Nimmo, a defence analyst with the Atlantic Council’s Digital Forensic Research Lab, points out that Farage has voted systematically in favour of Russian interests in the European parliament. “There is very, very strong support for the Kremlin among the far right in Europe. And Farage is squarely in that bloc with the likes of the Front National in France and Jobbik in Hungary.”

In February, when I started my investigation into Leave.EU and Cambridge Analytica, I met Andy Wigmore, its director of communications, for a coffee and he told me that Farage was in the US, where he was going to be making a big platform speech at CPAC, the US conservative conference. “And it’s not going to be his normal ‘Mr Brexit’ speech,” he said. “He’s going to be talking about the need for closer relations with Russia.” Really? I said. That sounds odd.”

“What? No way. Farage has been across the subject for years in the European parliament.” It didn’t make much sense at the time – and, in fact, that wasn’t the speech that Farage made. On February 24, he told the crowd: “Our real friends in the world speak English.” The next evening he had dinner with Trump at the Washington Trump hotel and tweeted a photo of him with “the Donald” in the early hours of the morning.”

“Eleven days later, he headed off to the Ecuadorian embassy. BuzzFeed’s story dropped at 1.31pm. And, 57 minutes later, at 2.28pm, WikiLeaks made an announcement: it would host a live press conference by Julian Assange about his latest leak, “Vault 7”.

“Nearly every day of 2017 has brought forth some new nugget of fact about “Trump-Russia” but this was a tough week for Trump, even by his standards. The “witch-hunt”, as he’s termed it, was gathering pace. On March 2, his attorney general, Jeff Sessions, recused himself from the Trump-Russia investigation and, on 4 March, Trump retaliated in a tweetstorm which accused Obama of “wiretapping” him.”

“And then, on 7 March, he finally caught a break. Some other news came along to knock him off the front page. For more than a month, WikiLeaks had been periodically issuing cryptic tweets about Vault 7. A month passed before it finally landed: a leak that, whether by accident or design, embarrassed the CIA.”

“WikiLeaks’ data trove had come from what it called “the CIA’s global hacking force”, its Center for Cyber Intelligence. “CIA scrambles to contain damage from WikiLeaks documents,” said the headline in what Trump calls the “failing New York Times”. The documents apparently showed that the CIA had the capability to hack a huge number of devices, not just phones but also TVs. In the midst of the most serious investigation of foreign cyber-interference in a current administration in US history, vivid revelations about the US’s similar capacity to interfere abroad had hit the headlines.”

A highly placed contact with links to US intelligence told the Observer: “When the heat is turned up and all electronic communication, you have to assume, is being intensely monitored, then those are the times when intelligence communication falls back on human couriers. Where you have individuals passing information in ways and places that cannot be monitored.”

“In October, Roger Stone, a Republican strategist whose links to Russia are currently under investigation by the FBI, told a local CBS reporter about “a back-channel communication with Assange, because we have a good mutual friend … that friend travels back and forth from the United States to London and we talk”. Asked directly by the Observer if Nigel Farage was that friend, his spokesman said: “Definitely not.”

“And in some ways, this may not be the point. A channel exists. In the perfect storm of fake news, disinformation and social media in which we now live, WikiLeaks is, in many ways, the swirling vortex at the centre of everything. Farage’s relationship with the organisation is just one of a whole host of questions to which we currently have no answer.” 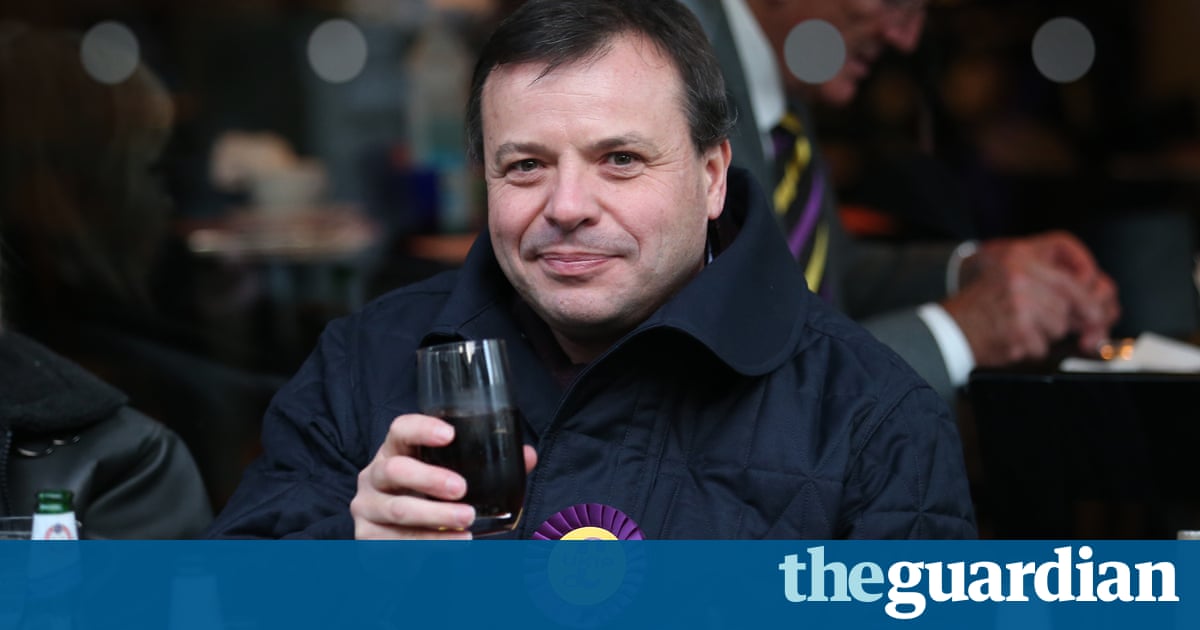 “Some of those questions dog Arron Banks, the Bristol businessman who bankrolled Leave.EU and who announced last week that he is standing for election in Clacton. When I interviewed him last month, he said: “Not a single penny of Russian money has been put into Brexit” – though that wasn’t a question I had asked him.”

“He is, however, openly pro-Putin and anti-democracy. “It’s not possible to run that entire country (Russia) as a pure democracy,” he said. When asked about the investigation into Leave.EU’s campaign finances, he told me: “I don’t give a monkey’s about the Electoral Commission.”

“On Friday night (4/21/17), he released a letter saying that he would no longer co-operate with the commission – a body mandated by parliament to uphold UK electoral law – and said he would “see them in court”.

“As Britain hurtles towards a general election to choose a government that will take us out of the European Union, this may be the moment to realise that Nigel Farage is not Widow Twankey, and that this is not a pantomime. Farage’s politics and his relationships are more complicated than we, the British press, have previously realized. His relationship to Mercer and Cambridge Analytica, the same firm that helped Trump to power, is now under official investigation.”

“Yet, here in Britain, we plunge blindly on. Real, hard questions need to asked about what exactly these relationships are and what they mean.”