aside Will The Real Hillary Clinton Please Stand Up? Part VI (Zombie Story)

This is a repeat of an earlier work. Hillary Clinton is attempting to reemerge back into the fray. I want to challenge the right’s “fake news” campaign against her for over 30 years. 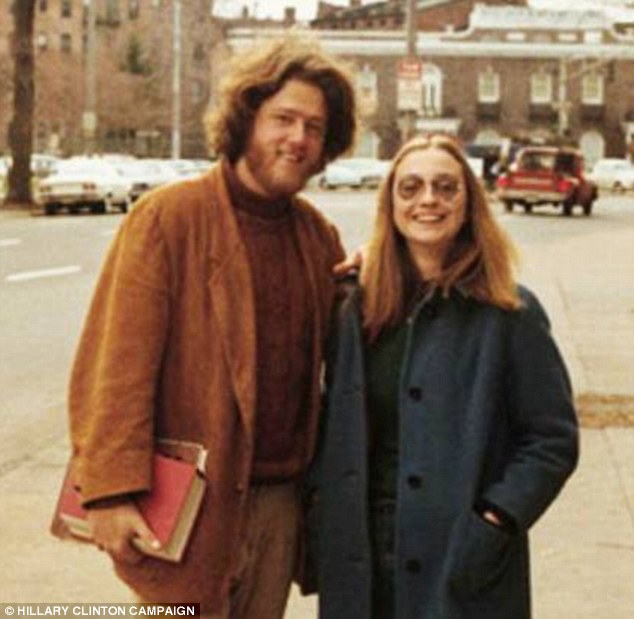 So far, in the past five posts, I’ve painted a picture of Hillary Rodham Clinton, as a woman with a lot of strength, grit, smarts, determination, and ambition who had developed an impressive  resume detailing a long list of significant accomplishments from 1973 to 1993. At a young age, she had  promising political future in her own right. As a feminist in these times, it is safe to say that she ruffled a few feathers even though most of her efforts during these years were directed towards the betterment of children.

It is my contention that Hillary Clinton’s reputation for being inherently dishonest and untrustworthy is based on a house of cards built over 40 years by the conservative right. You have observed how many Americans have come to be convinced that President Obama is Kenyan born and not a U.S. citizen despite overwhelming evidence to the contrary. There seems to be this republican axiom, that if a talking point based on a falsehood, is repeated continuously over and over again, it becomes an accepted fact. Just as I would not want any criticisms of our U.S. president to be presented through the false prism that he is not an American, I want the same for Hillary Clinton.

For now I am going to cover one republican myth which has been haunting Hillary Clinton for years based on events early in her career. The best coverage on this story is based on a 9/6/2016 Washington Post Fact Check article by Glenn Kessler, “The zombie claim that Hillary Clinton was fired during the Watergate inquiry.” Here are excerpts: 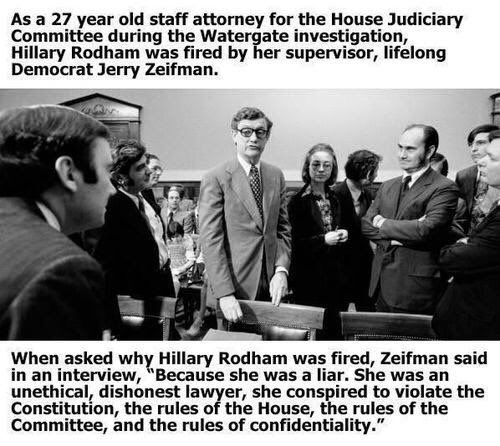 “Several times a week, The Fact Checker receives some version of the above statement in our Twitter and Facebook feeds. We’ve usually responded by sending fine debunking done several years ago by Snopes. And yet it persists. It’s simply one of those lies that will not die.”

Ace researcher Alice Crites suggested a good way to finally disprove this claim once and for all.

“Zeifman was chief counsel of the House Judiciary Committee during the Watergate inquiry that began in 1973. Hillary Clinton, who was Hillary Rodham at the time, had just graduated from Yale Law School as impeachment was considered against President Richard Nixon.”

“More than 20 years later, in 1995, Zeifman published a book titled, “Without Honor: Crimes of Camelot and the Impeachment of President Nixon.” Clinton is mainly a bit player in the book. Zeifman was mostly concerned with settling scores with John Doar, a lawyer who essentially displaced Zeifman when he was tapped to head the committee’s impeachment inquiry. Doar was a lifelong Republican who as a Justice Department lawyer in the 1960s had achieved fame for battling segregation in the South.

Zeifman also was not fond of Rep. (D-N.J.), chairman of the Judiciary Committee, whom he described in the book as too tied to the Mafia, too subservient to his increasingly African American constituency and too controlled by his top female aide.

Doar, as the chief lawyer for the impeachment probe, actually hired Clinton, and she reported to him. Zeifman, in his book appeared to be a frustrated bystander to many of Doar’s decisions. He had no control over her hiring — and would not have been in a position to fire her.

“Zeifman, with little evidence, claims that Doar conspired to drag on the impeachment inquiry as long as possible as a way to keep an increasingly weakened Nixon in power and pave the way for a candidacy of Sen. Ted Kennedy (D-Mass.). Zeifman also contends that the impeachment staff tried to ensure that illegal acts by Democratic presidents could not be raised as a defense by Nixon. Why a Republican like Doar would engage in such a conspiracy is not really explained.”

“Zeifman’s specific beef with Clinton is rather obscure. It mostly concerns his dislike of a brief that she wrote under Doar’s direction to advance a position advocated by Rodino — which would have denied Nixon the right to counsel as the committee investigated whether to recommend impeachment. Zeifman also suspects her of discussing the probe with a former law professor at Yale (although he acknowledges that Doar received permission from Rodino to consult with the professor).”Zeifman, in 2006, repackaged the brief mentions of Clinton in another book, titled, “Hillary’s Pursuit of Power,“ But the thinness of the material is demonstrated by the fact that the Watergate section of the second book takes up only 30 pages. ”

In neither of his books does Zeifman say he fired Clinton. But in 2008 (Election time), a reporter named Dan Calabrese wrote an article that claimed that “when the investigation was over, Zeifman fired Hillary from the committee staff and refused to give her a letter of recommendation.” The article quoted Zeifman as saying: “She was a liar. She was an unethical, dishonest lawyer. She conspired to violate the Constitution, the rules of the House, the rules of the committee and the rules of confidentiality.”

“(Calabrese also interviewed two other former staff members, neither of whom backed up Zeifman’s account.)”

“There is no actual quote from Zeifman saying he fired her. Moreover, in other interviews, Zeifman acknowledged that he did not fire Clinton. In 1999, nine years before the Calabrese interview, Zeifman told the Scripps-Howard news agency: “If I had the power to fire her, I would have fired her.” In a 2008 interview on “The Neal Boortz Show,” Zeifman was asked directly whether he fired her. His answer: “Well, let me put it this way. I terminated her, along with some other staff members who were — we no longer needed, and advised her that I would not — could not recommend her for any further positions.”

“Of course, since Nixon resigned, the impeachment inquiry was over and none of the staff members had jobs anymore. So it was not Zeifman who terminated their jobs but Nixon, who short-circuited what would have been a lengthy process leading to his removal from office.  Clinton had accepted a job offer to teach at the University of Arkansas, in order to be with her then-boyfriend, Bill Clinton — and presumably she would have wanted a (reference from John Doar), for whom she actually worked.”

“Finally, here’s the critical piece of evidence unearthed: the pay records of the Judiciary Committee. Note that Hillary Rodham is paid ($3,377.77) through Sept. 4; two of her more senior colleagues on the impeachment staff, associate special counsel Robert Sack and senior associate special counsel Bernard Nussbaum, were paid through Sept. 2 and Sept. 6, respectively. The committee’s impeachment report was published Aug. 20, and the staff’s work was done by early September.”

In other words, Clinton was not fired. This republican contrived story was awarded four Pinocchios.

“We know that it is all but impossible to stamp out these Internet memes. But whatever Zeifman may have said in one interview, he did not make this claim in either of his books. He gave different answers in other interviews. It’s clear he disliked Clinton, but he also disliked many of the other people he worked with, including her actual supervisor and the chairman of the Judiciary Committee, (John Doer). Ziefman was not Clinton’s supervisor and did not fire her, as demonstrated by the committee’s pay records.