aside Will The Real Hillary Please Stand Up, Part III (Early Adult Years )

This is a repeat of an earlier work. Hillary Clinton is attempting to reemerge back into the fray. I want to challenge the right’s “fake news” campaign against her for over 30 years.

Prior to 1996,  the year when the NY Times conservative columnist William Safire coined the phrase of Hillary Clinton as a congenital liar, there was still a lot of antipathy against her by republicans which started as early as 1974 during the time frame of her second job as a staffer on the House Judiciary Committee investigating Watergate, and this is before she became Mrs. Clinton. Years later in 2008, when she was running for elected office, conservative republicans contrived a story alleging that her boss, Jerry Ziefman had fired her for misconduct without a letter of recommendation. This tale was totally debunked by numerous credible news outlets but it still has legs. I will provide more details in a future blog.

In 1973, Hillary Rodham came out on the American stage as a Wellesley honor’s graduate who gave the graduation commencement address which was published in Life Magazine, and an outstanding Yale Law School grad when she accepted her first job.

The millennial women of today may still experience some levels of sexism but not anything like it was in the Mad Men era (mid 1960s through the 1970s). The ease with which young women enter the work environment today is due to women like Hillary Clinton paving the way and paying the price.

The leaders who had a significant influence in opening doors that young women today, take for granted are now about Hillary Clinton’s age or have passed away. Some of the names are : Betty Friedan who wrote the 1963 book, “The Feminine Mystique” and who organized the Women’s Strike For Equality in 1970, which popularized the feminist movement; Gloria Steinem who co-started a popular women’s magazine and several politically active women’s groups; Bell Hooks, a social activist author of the notable works, “Ain’t I A Woman? Black Women and Feminism and The Feminist Theory” in which she declared, “Feminism is a movement to end sexism, sexist exploitation and oppression;” Barbara Walters who was the first female “co-host” of any news show while earning 1/2 of her co-host’s salary, and she also became the first female co-anchor of an evening news broadcast for ABC News. From the ’70s until today, she paved the way for women in journalism and in the workforce; Coretta Scott King who was the wife of Martin Luther King, devoted much of her life to women’s equality and she helped found NOW (National Organization for Women) in 1966. In her efforts for women’s rights, King was also notably the first woman to deliver the class day address at Harvard. 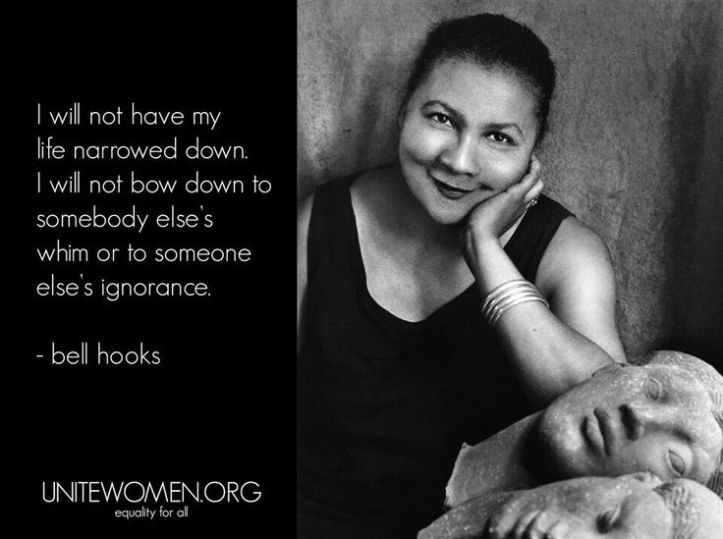 Maya Angelou who through her literature, public speaking and powerful writing, inspired both women and African Americans to overcome gender and race discrimination; Hillary Clinton who as the former First Lady is the only one to have ever run for public office, serving as the first female Senator from New York and the democratic U.S. Secretary of State. Following her 2008 campaign for the Democratic nomination, Clinton re-emerged as one of the top candidates in the 2016 election—proving she’s not going to be held back.

All these pioneering women have their war stories of having to deal with misogyny on their road to success with their hard earned stripes (internal wounds) which they hesitate to talk about to others. Many of these heroines grew up in an era were it was unseemly for them to talk about themselves and / or to trump their own horns. Peoples from this time warp, will have to figure out how to overcome their reticence when necessary and this includes Hillary Rodham Clinton.

“It was the decade in which the first women’s strike for equality in the US was held (August 26, 1970. Helen Reddy won a Grammy for the song “I Am Woman.” And in Britain, legislation was passed to tackle discrimination and enforce equal pay, while shelters to help those fleeing domestic violence mushroomed, as did rape crisis centers.”(Source: The 4/11/15 Guardian by Yvonne Roberts, “Ooh, you were awful: why I can’t look back on the sexist 70s with kindness.” Are the 70s guilty (of sexism) as charged? (Helen) Mirren was passing judgment in an interview in a national newspaper last week. In the 1970s, she was in her 20s and 30s and her extraordinary talent had become obvious; she was seen as a posh hippy bohemian not least because of her tattoo–then a sure sign of the subversive counterculture and not the kite mark of the masses as it is now–when she made an appearance  Michael Parkinson’s television chatshow. He asked how someone in their 20s, so “sluttishly erotic,” could be regarded as a serious actress: wouldn’t her “big bosoms” detract from her appearance?”

In those Mad Men Days, the following instance was not unusual. Don’t forget that there were no workforce sexual harassment sensitivity required classes.

The author Yvonne Roberts continues: “Spread your legs, enjoy maximum leg-room in the new Pontiac Star Chief” read one US magazine ad, not uncommon in its tone. It passed as normal until the cumulative impact of legislation, changing norms and a sense of vigilance was sharpened. Today, that vigilance is further honed by social media in sites such as The Everyday Sexism Project. In the 70s, even while Mirren and many other women put up with misogyny or risked accusations of a sense of humor bypass, lessons were being learned.” .

Source: From Hillary Rodham Clinton’s website (Ms. Rodham during 1973 was spared from having to deal with misogyny.)

“In 1973, Marian Wright Edelman started the Children’s Defense Fund, a nonprofit organization dedicated to providing a voice for children—one that pays special attention to poor children, children of color, and those with disabilities. One of her first hires was Ms. Hillary Rodham.”(She had managed to obtain a grant so that she could intern with Marian Edelman while in law school.)

“In 1973, as a staff lawyer, Hillary took on a project to figure out why 2 million U.S. children were not in school. Hillary, along with other activists and advocates, knocked on doors and talked to families all over America; they found that many schools were denying access to children with disabilities, children who couldn’t afford to pay for books, non-English speakers, and other students needing assistance.”

“I went door to door trying to identify the source of a troubling statistic,” Hillary says. “I found children who weren’t in school because of physical disabilities like blindness and deafness. I also found school-age siblings at home babysitting their younger brothers and sisters while their parents worked. On the small back porch off her family’s home in a neighborhood of Portuguese-American fishermen, I met a girl in a wheelchair, who told me how much she wanted to go to school.”

The relationship between Marian and Mrs. Clinton went through a cooling off period when President Clinton passed his welfare overhaul bill.