aside Why Did President And Tillerson Meet With Ukraine’s Foreign Minister On Same Day, As The Russians?

I noticed little coverage by the US news media outlets regarding the visit of the Ukrainian Foreign Minister Pavlo Klimkin’s at the White House on 5/10/17, following the exit of the Russian guests. I am curious as to why there were two meetings scheduled for the same day but at different time periods between the White House and the Russian dignitaries, and then the representatives from Ukraine.

The question is what was the Ukrainian official talking about with the republican President Donald Trump and the Secretary of State Rex Tillerson on the same day after the White House had greeted the Russian guests, the Foreign Minister Sergey Lavrov and the Ambassador Sergey Kislyak?

With this blog, I am also asking why the president is looking to slash economic aid to Ukraine by 68%? And I include the BBC timeline for recent Ukrainian history. 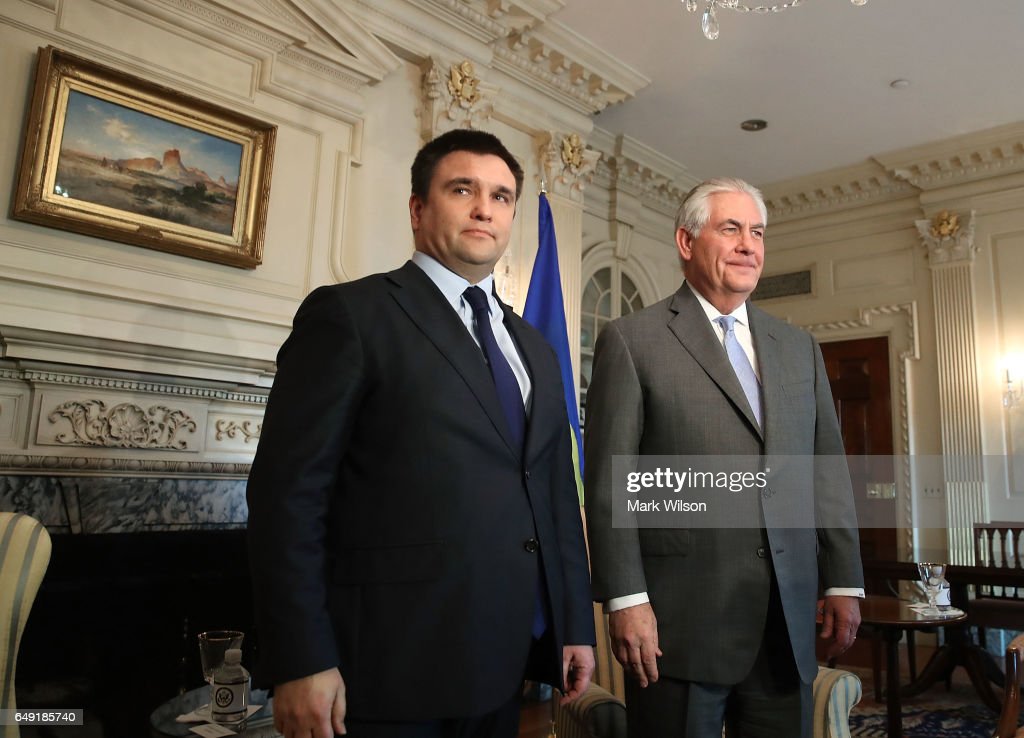 “This meeting was preceded by talks between Minister Klimkin and U.S. Vice President Michael Pence.”

“The interlocutors discussed in detail a situation in Donbas. Pavlo Klimkin thanked the U.S. leader for the unwavering position of the U.S. Administration in support of Ukraine’s territorial integrity and in countering Russian aggression.”

“Ukrainian Ambassador to the United States Valeriy Chaly also participated at the meetings, reads the report.”

“After the talks, Foreign Minister Pavlo Klimkin briefed President of Ukraine Petro Poroshenko on results of the meetings at the White House.”

US plans to cut funds to Ukraine by 68%.

As per the 4/25/17 Unian (Reuters) published report,” U.S. may cut financial assistance to Ukraine by 70% in 2018 – media,”  U.S. President Donald Trump’s vow to put “America first” includes a plan to drastically cut assistance to developing countries and merge the State Department with USAID, according to an internal budget document and sources, according to Foreign Policy.”

“The administration’s March budget proposal vowed to slash aid to developing countries by over one-third, but contained few details. According to a detailed 15-page State Department budget document obtained by Foreign Policy, the overhaul also includes rechanneling funding from development assistance into a program that is tied closely to national security objectives.”

“The document details how the Trump administration’s plans to reduce direct foreign assistance would take place in fiscal year 2018. Some of the cuts appear directed at countries that had been regarded as strategically important.”

“For instance, foreign assistance to Ukraine, which is used to encourage political and economic reform, is facing a 68.8 percent cut. “However, the publication notes that given the steep bipartisan opposition to slashing foreign assistance, Congress likely will not consent to the entire proposed reduction.”

Anti-government protesters gather on the Independent square in Kiev

2013 July – “Russia halts imports of chocolate from one of Ukraine’s main confectionery makers, Roshen, saying its products fall below safety standards, in what is seen as retaliation for Ukraine’s efforts to integrate further with the EU.”

2013 November – “Tens of thousands of protesters take to the streets of central Kiev and other cities to protest at the government’s sudden decision to abandon plans to sign an association agreement with the EU. They accuse the government of bowing to Russian pressure, as well as being corrupt and unaccountable.”

2014 July – “A Malaysian airliner comes down in separatist-held territory, killing all 298 people on board, with all evidence suggesting that it was shot down.”

2015 February – “Germany and France broker new ceasefire deal at talks in Belarus, resulting in a fragile lull in fighting after Russian-backed separatists drive Ukrainian troops out of the transport hub of Debaltseve.”

2015 June – “Ukraine suspends gas purchases from Russia after talks on the price to be paid for the next three months break down.”

2016 April – “Dutch voters reject the proposed Ukraine-EU association agreement in a referendum, albeit on a low turnout.”

2016 November – “A new shelter is moved over the wrecked reactor at the heart of the 1986 Chernobyl nuclear disaster to prevent radiation leaks from the ageing “sarcophagus” hastily erected after the meltdown.”

2016 October – “EU negotiators reach an agreement to grant visa-free travel to Ukrainian citizens; the deal must still be approved by the member states and the European Parliament.”

2017 January-February  – “Ukraine accuses Russian-backed rebels of shelling town of Avdiyivka, while rebels accuse Ukraine of shelling their stronghold of Donetsk.”