Even before the republican President Donald Trump stepped into the White House, his son-in-law Jared Kushner was working behind the scenes to set up secure back door communications channels between the White House and Russian officials.

This detail along with a series of numerous other examples like where White House personnel withheld from their request for security clearance forms, any information regarding meetings they held in the past with Russian operatives, bars there being a benign explanation. Because of news reports, we now know that the president’s former NSA adviser, General Mike Flynn, the US Attorney General and his son-in-law Jared Kushner, all omitted data about their contacts with Russian representatives. Originally, General Flynn lied about the number of contacts and the content of what was said between himself and the US Russian Ambassador Sergey Kislyak which is why he was forced to resign in February 2017. Mr. Jeff Sessions lied during his confirmations hearings to qualify to become the next US attorney general, which is why he was obligated to recuse himself from the Department of Justice office’s investigations into the Trump-Russian saga.

“Jared Kushner and Russia’s ambassador to Washington discussed the possibility of setting up a secret and secure communications channel between Trump’s transition team and the Kremlin, using Russian diplomatic facilities in an apparent move to shield their pre-inauguration discussions from monitoring, according to U.S. officials briefed on intelligence reports.”

“Ambassador Sergei Kislyak reported to his superiors in Moscow that Kushner, son-in-law and confidant to then-President-elect Trump, made the proposal during a meeting on Dec. 1 or 2 at Trump Tower, according to intercepts of Russian communications that were reviewed by U.S. officials. Kislyak said Kushner suggested using Russian diplomatic facilities in the United States for the communications.” 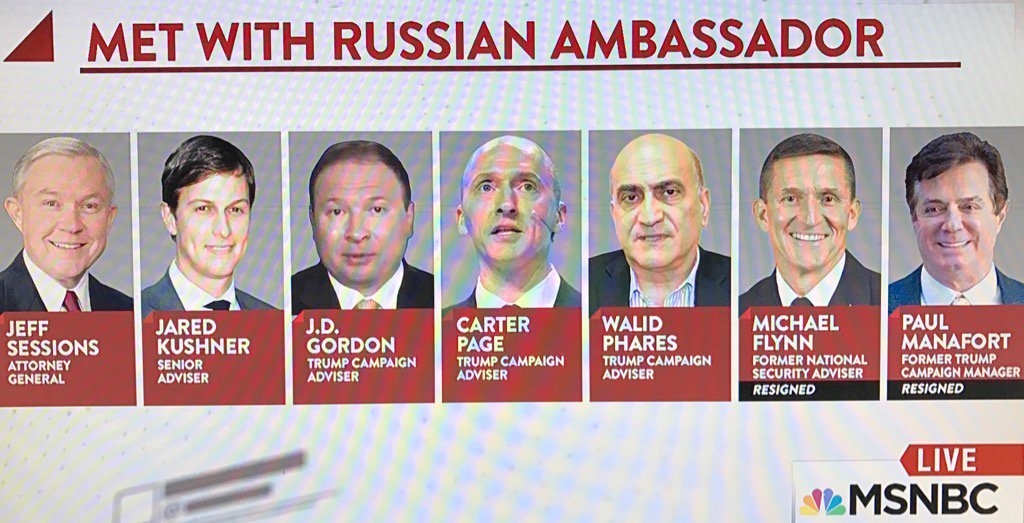 “The White House disclosed the fact of the meeting only in March, playing down its significance. But people familiar with the matter say the FBI now considers the encounter, as well as another meeting Kushner had with a Russian banker, to be of investigative interest.”

“Kislyak reportedly was taken aback by the suggestion of allowing an American to use Russian communications gear at its embassy or consulate — a proposal that would have carried security risks for Moscow as well as the Trump team.”

“Russia at times feeds false information into communication streams it suspects are monitored as a way of sowing misinformation and confusion among U.S. analysts. But officials said that it’s unclear what Kislyak would have had to gain by falsely characterizing his contacts with Kushner to Moscow, particularly at a time when the Kremlin still saw the prospect of dramatically improved relations with Trump.”Kushner’s apparent interest in establishing a secret channel with Moscow, rather than relying on U.S. government systems, has added to the intrigue surrounding the Trump administration’s relationship with Russia.

“Current and former U.S. intelligence officials said that although Russian diplomats have secure means of communicating with Moscow, Kushner’s apparent request for access to such channels was extraordinary.” 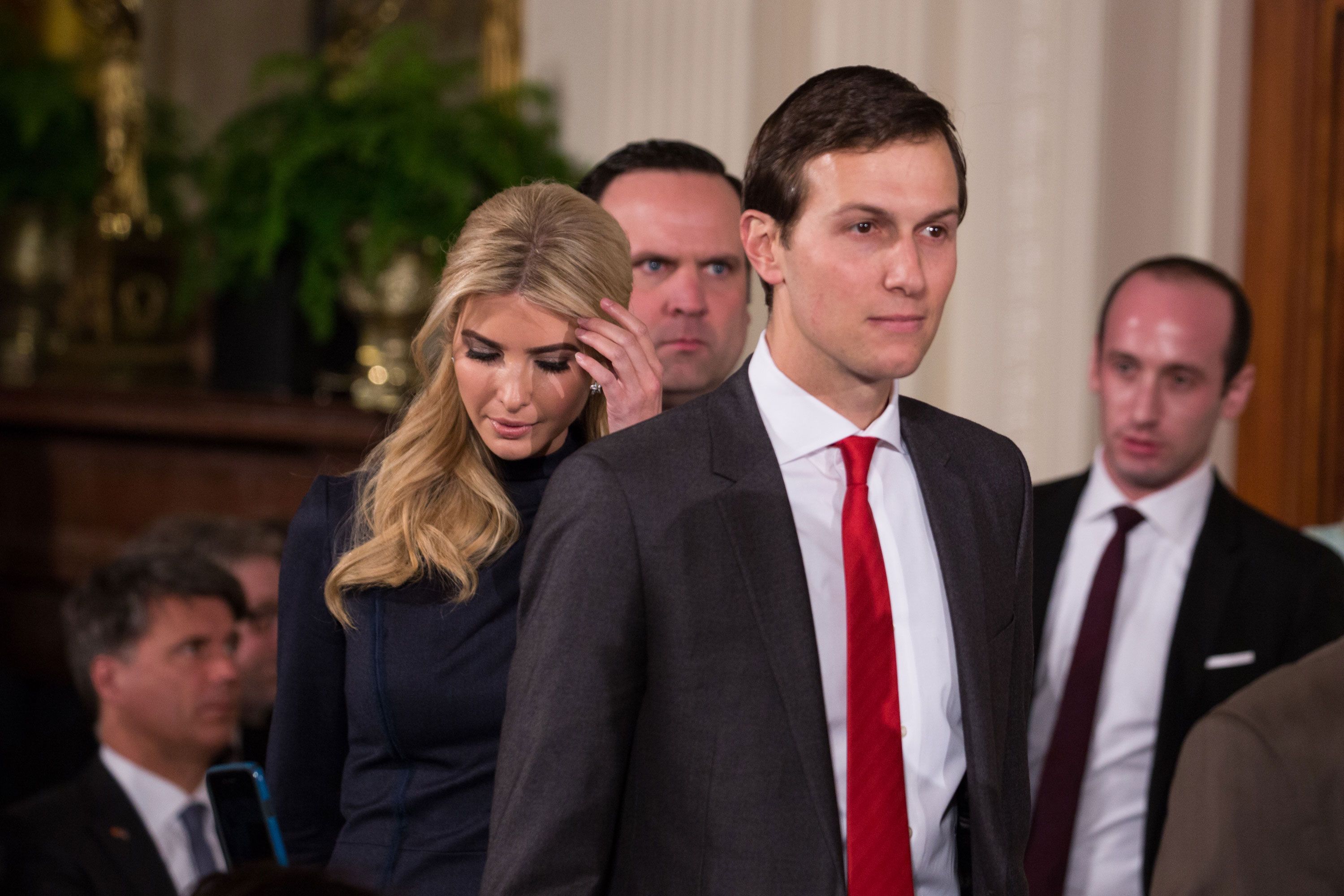 “How would he trust that the Russians wouldn’t leak it on their side?” said one former senior intelligence official. The FBI would know that a Trump transition official was going in and out of the embassy, which would cause “a great deal” of concern, he added. The entire idea, he said, “seems extremely naive or absolutely crazy.”

“The discussion of a secret channel adds to a broader pattern of efforts by Trump’s closest advisers to obscure their contacts with Russian counterparts. Trump’s first national security adviser, Flynn, was forced to resign after a series of false statements about his conversations with Kislyak. Attorney General Jeff Sessions recused himself from matters related to the Russia investigation after it was revealed that he had failed to disclose his own meetings with Kislyak when asked during congressional testimony about any contact with Russians.”

“Kushner’s interactions with Russians — including Kislyak and an executive for a Russian bank under U.S. sanctions ( Sergey N. Gorkov, the chief of Vnesheconombank)— were not acknowledged by the White House until they were exposed in media reports.”

It is common for senior advisers of a newly elected president to be in contact with foreign leaders and officials. But new administrations are generally cautious in their handling of interactions with Moscow, which U.S. intelligence agencies have accused of waging an unprecedented campaign to interfere in last year’s presidential race and help elect Trump.”

“The State Department, the White House National Security Council and U.S. intelligence agencies all have the ability to set up secure communications channels with foreign leaders, though doing so for a transition team would be unusual.”

“Trump’s advisers were similarly secretive about meetings with leaders from the United Arab Emirates. The Obama White House only learned that the crown prince of Abu Dhabi was flying to New York in December to see Kushner, Flynn and Stephen K. Bannon, another top Trump adviser, because U.S. border agents in the UAE spotted the Emirate leader’s name on a flight manifest.”

“Russia would also have had reasons of its own to reject such an overture from Kushner. Doing so would require Moscow to expose its most sophisticated communications capabilities — which are likely housed in highly secure locations at diplomatic compounds — to an American.”

“The Post was first alerted in mid-December to the meeting by an anonymous letter, which said, among other things, that Kushner had talked to Kislyak about setting up the communications channel. This week, officials who reviewed the letter and spoke on the condition of anonymity to discuss sensitive intelligence said the portion about the secret channel was consistent with their understanding of events.”

“For instance, according to those officials and the letter, Kushner conveyed to the Russians that he was aware that it would be politically sensitive to meet publicly, but it was necessary for the Trump team to be able to continue their communication with Russian government officials.”

“In addition to their discussion about setting up the communications channel, Kushner, Flynn and Kislyak also talked about arranging a meeting between a representative of Trump and a “Russian contact” in a third country whose name was not identified, according to the anonymous letter.”

“The Post reported in April that Erik Prince, the former founder of the private security firm Blackwater and an informal adviser to the Trump transition team, met on Jan. 11 — nine days before Trump’s inauguration — in the Seychelles islands in the Indian Ocean with a representative of Russian President Vladimir Putin.”