aside During The 6/8/17 US Senate Intel Hearing With FBI Director Comey, Senator McCain Lost It

Like a lot of Americans, I was glued to the TV to watch to scheduled 6/8/17 US Senate Intel Committee hearing, where the Senators would be questioning the recently fired FBI Director James Comey about his recollections regarding several interactions between himself and the republican President Trump.

One republican that I had waited to hear his questions was the republican military hawk, Senator John McCain. I was surprised to listen to him mumbling questions which were nonsensical. Senator McCain was conflating about how could have Director Comey ended the FBI’s investigation into the Hillary Clinton’s email scandal around July 2016, which pertained to her position as secretary of state from 2009-2013; while keeping the Trump-Russian probe open which was initiated around July 2016. He kept referring to President Comey instead of President Donald Trump. He was clearly experiencing some senior moments.

As per a 6/7/17 CNN report, “One particularly vocal senator will get a chance to question former FBI Director Jim Comey on Thursday thanks to quirky Senate rules: Sen. John McCain.”

“The Arizona Republican, who is not a full member of the Senate intelligence committee, confirmed to CNN Tuesday that he plans to attend the hearing and question the former FBI director who was fired by President Donald Trump last month.”
“McCain is able to appear at the hearing because he is chairman of the Senate Armed Services Committee. As Armed Services chairman, he is also an “ex officio” member of the Intelligence Committee, which means he doesn’t get to vote but does get to attend meetings and hearings, including this one.”

As of 1:00 pm EST, PRESIDENT DONALD TRUMP DID NOT TWEET EVEN ONCE.

“Sen. John McCain (R-Ariz.) was the last senator to question former FBI director James B. Comey at Thursday’s dramatic Senate Intelligence Committee hearing. Nearing the end of more than 2½ hours of questioning, McCain focused his line of questioning on two FBI investigations: the 2016 investigation into Hillary Clinton’s use of a private email server and the 2017 investigation into Russian interference in the presidential election.”

“But several of his questions confused viewers, and seemingly Comey himself, and occasionally became incoherent. He referred to “President Comey,” and at times looked confused and frustrated with Comey’s answers. Viewers clearly thought it was notable; Twitter announced it was the most-tweeted moment of the hearing.”

These are the top Tweeted moments from Former FBI Director Comey’s testimony in the Senate pic.twitter.com/Ew9xcRAFNg 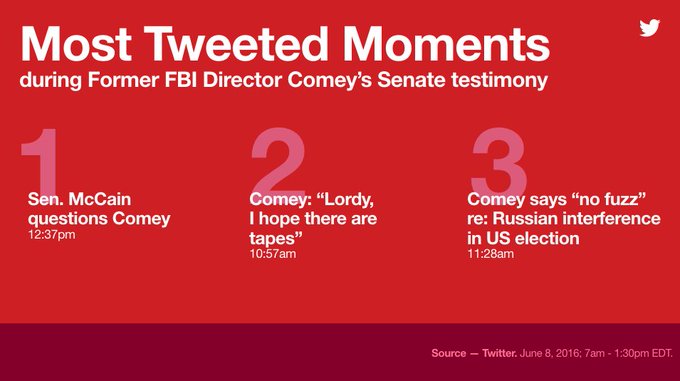 “In the case of Hillary Clinton, you made the statement that there wasn’t sufficient evidence to bring a suit against her, although it had been very careless in their behavior, but you did reach a conclusion in that case that it was not necessary to further pursue her,” McCain’s line of questioning began. “Yet at the same time, in the case of Mr. (Trump), you said that there was not enough information to make a conclusion. Tell me the difference between your conclusion as far as former Secretary Clinton is concerned, and Mr. Trump.”

“Comey answered that the Clinton email investigation was a completed, closed investigation at the time he announced that “no reasonable prosecutor” would bring a case against her last July 2016, while the Russia investigation is still underway and could be for some time.”

“But McCain wasn’t satisfied. He seemed to be arguing that Comey exonerated Clinton, in a sense, but left an investigation looming over President Trump, setting a double standard.”

“Comey again tried to explain that he only discussed the findings of the Clinton investigation after it was completed.”

“That’s when it got really weird.”

“I think it’s hard to reconcile, in one case you reach a complete conclusion, and on the other side you have not,” McCain said. “I think that’s a double standard there, to tell you the truth.”

“It’s hard to say, but McCain seemed to be trying to blunt the effect of Comey’s testimony about President Trump.”

“The rest of the statement reads:

What I was trying to get at was whether Mr. Comey believes that any of his interactions with the President rise to the level of obstruction of justice. In the case of Secretary Clinton’s emails, Mr. Comey was willing to step beyond his role as an investigator and state his belief about what ‘no reasonable prosecutor’ would conclude about the evidence. I wanted Mr. Comey to apply the same approach to the key question surrounding his interactions with President Trump—whether or not the President’s conduct constitutes obstruction of justice. While I missed an opportunity in today’s hearing, I still believe this question is important, and I intend to submit it in writing to Mr. Comey for the record.”