Anyone who has done even the most minimal level of serious research knows that Saudi Arabia—not Iran or (Qatar)—is the biggest state sponsor of terrorism in the world today and Wahhabism remains the source of most radical Islamic extremism. Out of the 61 groups that are designated as terrorist organizations by the U.S. State Department, the overwhelming majority are Wahhabi-inspired and Saudi-funded groups, with its focus on the West and Iran. Only two are listed (Iran) Shi’a—Hezbollah and Kataib Hezbollah, with only four have ever claimed to receive support from Iran. Nearly all of the Sunni militant groups listed receive significant monies and backing from either the Saudi government or its citizens.

The following story details how the president is forming policies against Qatar, the home of US military bases, with the pretext that Qatar  is “a funder of terror at a very high level,” in order to side with the wishes of Saudi Arabia and the UAE, where he does have significant business interests…

“President Trump has done business with royals from Saudi Arabia for at least 20 years, since he sold the Plaza Hotel to a partnership formed by a Saudi prince. Mr. Trump has earned millions of dollars from the United Arab Emirates for putting his name on a golf course, with a second soon to open.”

“He has never entered the booming market in neighboring Qatar, however, despite years of trying.” “Now a feud has broken out among these three crucial American allies, and Mr. Trump has thrown his weight firmly behind the two countries where he has business ties, raising new concerns about the appearance of a conflict between his public role and his financial incentives.”

“Mr. Trump has said he is backing Saudi Arabia and the United Arab Emirates because Qatar is “a funder of terror at a very high level.” But his stance toward Qatar, which is host to the largest American air base in the region, has differed sharply from the positions of the Pentagon and State Department. The secretaries of defense and state have stayed neutral, urging unity against the common enemy of the Islamic State.”

“Mr. Trump is the first president in 40 years to retain his personal business interests after entering the White House. Other senior officials in the executive branch are required to divest their assets. Critics say his singular decision to hold on to his global business empire inevitably casts a doubt on his motives, especially when his public actions dovetail with his business interests.”

“Other countries in the Middle East see what is happening and may think, ‘We should be opening golf courses’ or ‘We should be buying rooms at the Trump International,’” said Brian Egan, a State Department legal adviser under the Obama administration. “Even if there is no nefarious intent on behalf of the president or the Trumps, for a president to be making money from business holdings in sensitive places around the world is likely to have an impact.”

Stepping away from management without giving up ownership does not diminish Mr. Trump’s financial incentives or conflicts, as the director of the Office of Government Ethics warned before Mr. Trump’s inauguration.”

The feud in the Persian Gulf flared up on June 5, when Saudi Arabia, the United Arab Emirates and Arab allies all broke off trade, travel and diplomatic relations with Qatar as punishment for what they said was its support of terrorism. Scholars of the region and American diplomats, however, said the dispute appeared to have more to do with jostling over power and autonomy.

“A few days later, Secretary of State Rex W. Tillerson called on Qatar “to be responsive to the concerns of its neighbors.” But he added, “We call on the Kingdom of Saudi Arabia, the United Arab Emirates, Bahrain and Egypt to ease the blockade against Qatar.” He noted that the dispute was impairing international trade and hindering the military campaign against the Islamic State.” 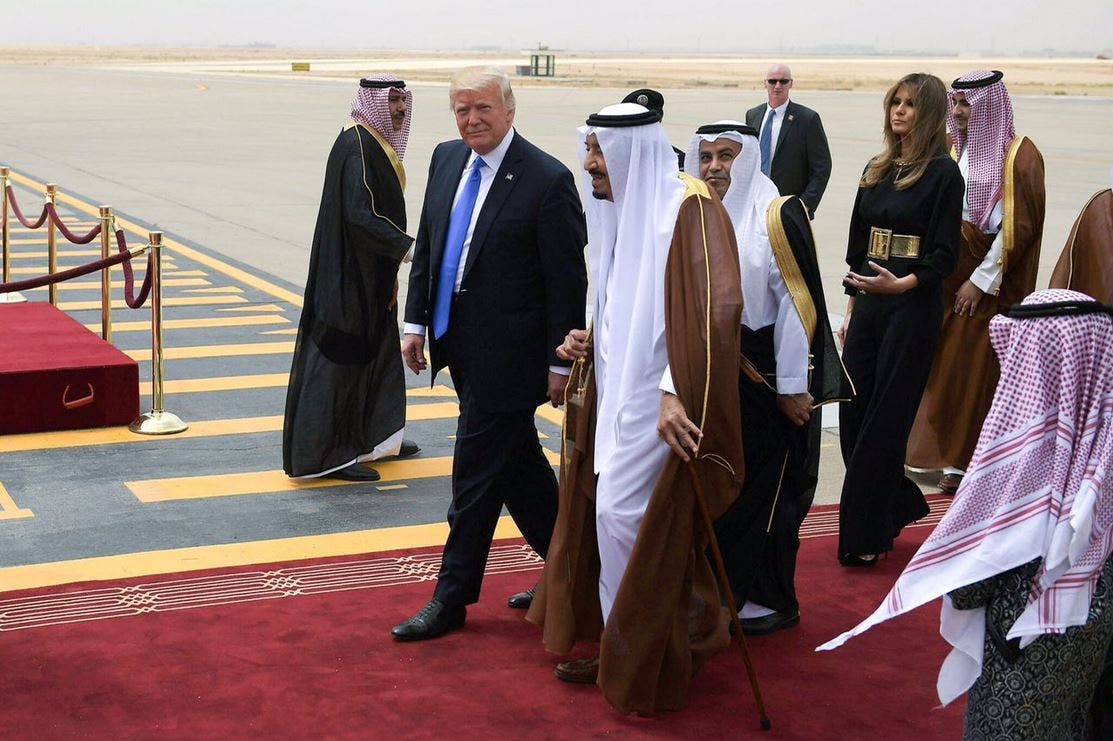 “Mr. Trump, on the other hand, endorsed the blockade as soon as it started. He had returned days earlier from a summit meeting in Riyadh, Saudi Arabia, with the leaders of all the gulf states, and he declared on Twitter that his visit was “already paying off.”

“Then Mr. Trump defended the blockade again just hours after Mr. Tillerson had urged an end to it. “The time had come to call on Qatar to end its funding” of terrorism, Mr. Trump said.”

“Mr. Trump’s dealings with the Saudis extend back to at least 1995, when he sold the Plaza Hotel to a partnership formed by a Saudi prince and an investor from Singapore. The deal, for $325 million, enabled Mr. Trump to escape a default on his loans. (The same prince had reportedly bought Mr. Trump’s yacht for $18 million four years earlier.)”

“His company filed paperwork to create eight inactive corporations in Saudi Arabia around that time, presumably contemplating a hotel or licensing deal in Jidda that has not come to fruition.”

“In May, the rulers of the kingdom agreed to invest $20 billion in a fund to build invest in American infrastructure, billed as part of an initiative Mr. Trump has championed. The $20 billion investment went to a fund set up by the money manager Blackstone, whose founder is close to Mr. Trump, his daughter Ivanka and her husband, Jared Kushner.”

“Mr. Trump made his first deal in Dubai, in the United Arab Emirates, in 2005, to build a hotel with a state-owned developer. He pulled out after the 2008 recession, but by 2010 Mr. Trump and two of his children, Ms. Trump and Donald Jr., were back in the region scouting for new business.”

“Mr. Trump linked up in 2013 with Hussain Sajwani, a developer sometimes referred to as the Donald of DUBAI. All big real estate developers in the United Arab Emirates are acutely dependent on the country’s rulers, who can authorize or block their projects.”

“Mr. Trump agreed to manage a golf course as part of a development built by Damac, Mr. Sajwani’s company. Mr. Trump hung billboards of Ms. Trump, a former model and executive for his company, all over the city to sell properties, and he pronounced it “the greatest golf community in Asia.” In 2014, he agreed to manage a second course with Mr. Sajwani.”

“The golf courses paid Mr. Trump $2 million to $10 million even before they opened, according to financial disclosure forms filed in May 2016. Then, after Mr. Trump’s election as president, Mr. Sajwani offered to pay him an additional $2 billion to develop more properties. Mr. Sajwani’s company did not respond to messages.”

“As president-elect, Mr. Trump said he had declined. “I did not have to turn it down,” he said in January, noting that presidents are exempt from ethics laws barring such conflicts.”

“When Mr. Sajwani attended Mr. Trump’s New Year’s Eve party at his Mar-a-Lago resort, Mr. Trump praised the Sajwani family as “beautiful people.” A few weeks later, his sons Donald Jr. and Eric attended the opening of the first Dubai golf course, and on May 16, Mr. Sajwani posted an Instagram photo of himself dining with Donald Trump Jr. in Dubai. They discussed “new ideas and innovation,” Mr. Sajwani wrote.”

“In a financial disclosure form released on Friday, Mr. Trump reported a sharp drop in his Dubai income, to about $13,000 over roughly 16 months, without explanation. The second Trump golf course is expected to open in 2018.”

“Mr. Trump and Ms. Trump looked for deals in Doha, Qatar, too, and the Trump organization eventually opened shell corporations there. “The growth and development is visionary and outstanding” in Doha, Ms. Trump told the Emirati publication Gulf News after a trip to Qatar in 2010.”

“But the Trumps had less luck in Doha. Their only business with Qatar was leasing office space in Trump Tower, in Manhattan, to the national airway. The airline moved out before Mr. Trump became president.”

“Now some in Qatar are asking if missing a chance to do business with the Trumps might have been a mistake, Clayton Swisher, a journalist who works for the Qatar-owned Al Jazeera network, wrote in a recent column..”