Having children involved, maybe is what it will take to get the US Congress representatives’ attention that climate change science is for real and that they need to address this as a US national security priority with action, legislation and not just lip service.

On May 3, 2017, John Light of billmoyers.com penned the following report, “Kids Suing Trump Hope the Courts Step Up on Climate Change.”

“Congress and the White House aren’t going to address the climate crisis anytime soon. Will judges?”

“Last week (April 2017), as hundreds of thousands of protesters descended on Washington, DC for the People’s Climate March, 14 young Americans, ranging in age from 9 to 21, held a press conference in front the Supreme Court.”

We are not going to wait until someone in office is representing our voices,” 16-year-old Xiuhtzcatl Martinez told the assembled crowd of reporters, activists, and four US senators. “We need the action to come today. The threat upon our future is happening right now.”

“Martinez and the 13 teens and tweens by his side were among 21 plaintiffs suing the US government to force it to take action on climate change. The government has known about the threat of climate change for decades, they argue, but has continued to take actions that contribute to climate change — like approving pipelines and subsidizing the fossil fuel industry — imperiling the lives of young Americans and future generations.”

“This, lawyers for these young plaintiffs allege, has violated their constitutional right to a habitable climate. The lawyers also argue that the atmosphere is a public trust, and that by continuing to allow American businesses to spew greenhouse gases into the atmosphere the government has neglected its responsibility to protect this resource. The kids want immediate steps to bring CO2 levels in the atmosphere down to 350 parts per million, the amount scientists consider safe to protect the planet from continued global warming. CO2 levels have risen well above 400 ppm.”

“These arguments are groundbreaking, and take environmental law into areas it’s never been. But judges have also signaled that the arguments may hold up in court. Last November, Federal District Judge Ann Aiken allowed the case to move forward, ruling against a bid by the Obama administration to dismiss the case. In her decision, she argued that the lawsuit was “no ordinary lawsuit,” continuing:”

“This action is of a different order than the typical environmental case. It alleges that defendants’ actions and inactions — whether or not they violate any specific statutory duty have so profoundly damaged our home planet that they threaten plaintiffs’ fundamental constitutional rights to life and liberty.”

“The ruling attracted the attention of environmental activists — Bill McKibben and Naomi Klein called the case “the most important lawsuit on the planet right now” — and legal scholars alike.” 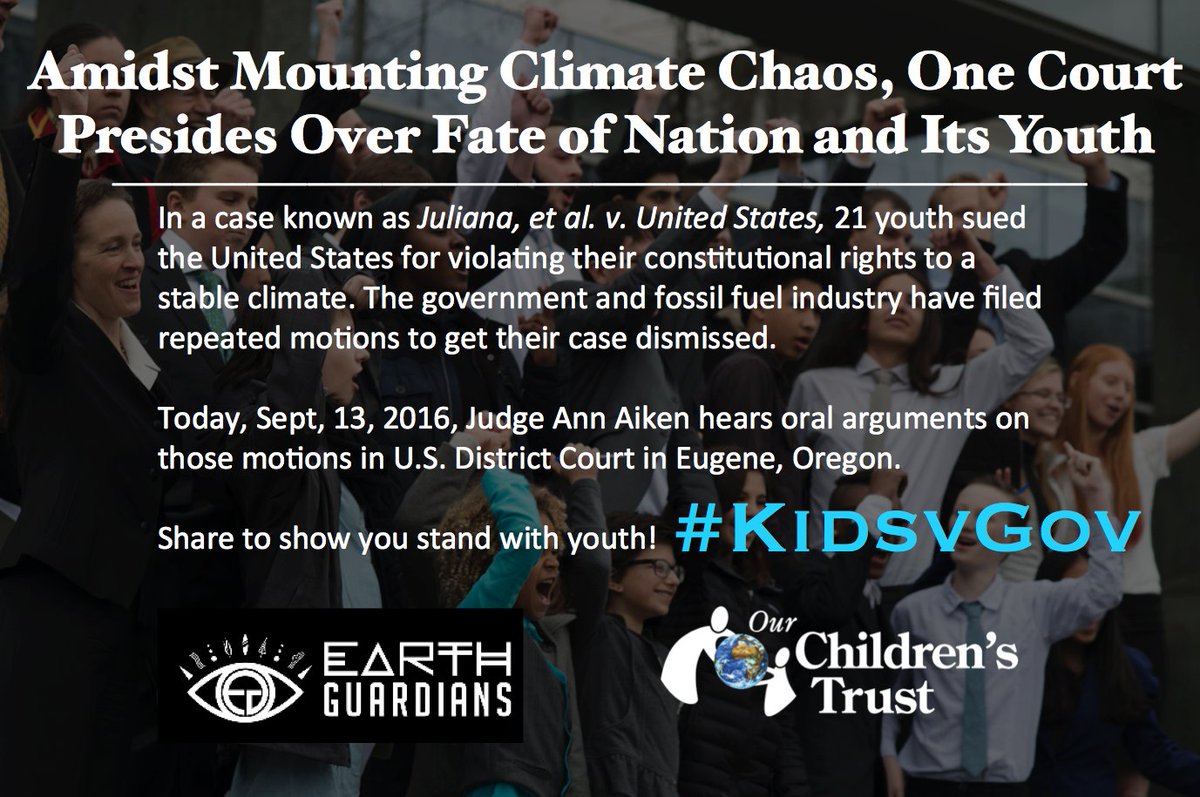 “Judge Aiken of the federal district court issued her decision on the government’s motion to dismiss they day after Donald Trump was elected president, and that decision was a ray of sunshine in what was a very dark day for the environmental community,” says Michael Burger, the executive director of Columbia University’s Sabin Center for Climate Change Law.”

“Though the suit was initially filed during the Obama administration, Donald Trump, a far greater foe of the environment, inherited the case. Aiken’s decision, Burger says, “offered some hope that the courts will stand as a bulwark against what will be a long, hard-fought battle — a real onslaught against environmental protections.”

“The Trump administration has also been paying attention. In March, Jeffrey Wood, an acting assistant attorney general and former coal lobbyist, called on the court, again, to throw out the suit, saying he hoped to “avoid litigation that is unprecedented in its scope and in its potential to be protracted, expensive and disruptive to the continuing operation of the United States government.” Earlier this week, however, the court issued an opinion indicating that it is unlikely to do so; instead, the case is expected to go to trial in federal district court in Oregon later this year.”

“Whatever the district court decides can be appealed to the 9th Circuit — and then, from there, to the Supreme Court, where the young plaintiffs gathered last Thursday. If the kids are lucky, their rally foreshadows things to come: Perhaps, sometime within the next few years, they’ll be back, standing in the same place, preparing to make their argument before the nine justices who deliberate within.”

“In theory, courts aren’t for sale,” Sen. Sheldon Whitehouse (D-RI) told them, standing in front of the court’s columned entrance. But, Whitehouse said, since the Supreme Court’s Citizens United decision in 2010, which allowed unlimited and often undisclosed sums of money to flow into elections, the same cannot be said of Congress. The fossil fuel industry now wields tremendous influence over legislators’ careers and has inhibited climate action, Whitehouse said.”

“We’re still fighting over there and I believe we will win because the people are with us, but oh, my, what a barricade of lies and dark money the fossil fuel industry has built around that place,” Whitehouse continued, nodding toward the Capitol across the street.

“The 21 young plaintiffs are supported in their case by a nonprofit group composed of lawyers and activists under the name Our Children’s Trust. The group was the brainchild of Julia Olson, an environmental lawyer who began to feel a growing need to take a more aggressive approach to climate change litigation in 2006, after watching Al Gore’s An Inconvenient Truth.”

“A colleague connected Olson to Mary Wood, a professor and director of Environmental and Natural Resources Law Center at the University of Oregon, who had been developing the theory of an atmospheric trust — the idea that the atmosphere is a public resource to be protected by the government. Wood, in turn, connected Olson to climate scientist James Hansen, one of the first researchers to go before Congress and sound the alarm that climate change had begun. Hansen eventually joined Our Children’s Trust’s suit against the federal government: Alongside the 21 young plaintiffs, Hansen’s name is on the suit as a “guardian for future generations” and for his granddaughter, who is also a plaintiff.”

“Our Children’s Trust has filed suits in all 50 states, in addition to the suit currently pending against the federal government. The group stated litigating in 2011, and, since then, climate change has moved from a future threat to one that is very much in the present — something the youths suing Trump can attest to.”