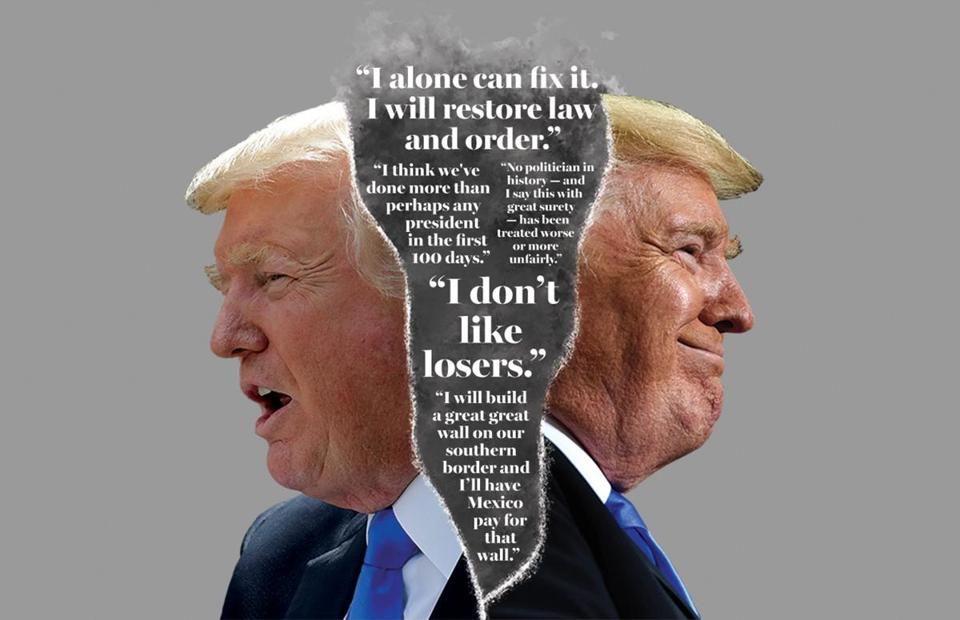 On the evening of July 5, 2017, I was watching the MSNBC’s TV host, Lawrence O’Donnell interviewing a psychiatrist from Chicago, where the guest, Dr. Gouurguechon was explaining how the Army has an 100 year old field manual which includes an updated section on how to evaluate if a  candidate is unfit for leadership positions and if a leader is no longer able to continue in such a role.

The republican President Donald  Trump, as the military’s Commander-In-Chief would fail this objective criteria. bigly. And this is who, the Republican Party has assisted to become our 45th President of the USA and, for political expediency reasons, the majority of republican legislators continue to enable and cover for his numerous missteps.

And this is what “we the people” are dealing with as we observe the president meeting with leaders from around the world and dealing with crisis situations like North Korea’s continued testing of missiles that could possibly reach the west coast of the USA.

Dear Republican Leaders, If anything should go dramatically wrong with this situation, the blood will be on your hands.

Prudence L. Gourguechon, MD. and  psychiatrist and psychoanalyst penned the following opinion piece, “Is Trump mentally fit to be president? Let’s consult the U.S. Army’s field manual on leadership,” for the LA Times on June 16, 2017.

“Since President Trump’s inauguration, an unusual amount of attention has been paid to the 25th Amendment to the Constitution. That’s the measure, ratified in 1967, that allows for removal of the president in the event that he is “unable to discharge the powers and duties” of the office. What does that mean, exactly? Lawyers surely have some ideas. But as a psychiatrist, I believe we need a rational, thorough and coherent definition of the mental capacities required to carry out “the powers and duties” of the presidency.”

“Although there are volumes devoted to outlining criteria for psychiatric disorders, there is surprisingly little psychiatric literature defining mental capacity, even less on the particular abilities required for serving in positions of great responsibility. Despite the thousands of articles and books written on leadership, primarily in the business arena, I have found only one source where the capacities necessary for strategic leadership are clearly and comprehensively laid out: the U.S. Army’s “Field Manual 6-22 Leader Development.”

“The Army’s field manual on leadership is an extraordinarily sophisticated document, founded in sound psychological research and psychiatric theory, as well as military practice. It articulates the core faculties that officers, including commanders, need in order to fulfill their jobs. From the manual’s 135 dense pages, I have distilled five crucial qualities:”

“According to the Army, trust is fundamental to the functioning of a team or alliance in any setting: “Leaders shape the ethical climate of their organization while developing the trust and relationships that enable proper leadership.” A leader who is deficient in the capacity for trust makes little effort to support others, may be isolated and aloof, may be apathetic about discrimination, allows distrustful behaviors to persist among team members, makes unrealistic promises and focuses on self-promotion.”

“A good leader ‘demonstrates an understanding of another person’s point of view’ and ‘identifies with others’ feelings and emotions.’

“The manual requires that a leader demonstrate control over his behavior and align his behavior with core Army values: “Loyalty, duty, respect, selfless service, honor, integrity, and personal courage.” The disciplined leader does not have emotional outbursts or act impulsively, and he maintains composure in stressful or adverse situations. Without discipline and self-control, a leader may not be able to resist temptation, to stay focused despite distractions, to avoid impulsive action or to think before jumping to a conclusion. The leader who fails to demonstrate discipline reacts “viscerally or angrily when receiving bad news or conflicting information,” and he “allows personal emotions to drive decisions or guide responses to emotionally charged situations.”

“In psychiatry, we talk about “filters” — neurologic braking systems that enable us to appropriately inhibit our speech and actions even when disturbing thoughts or powerful emotions are present. Discipline and self-control require that an individual has a robust working filter, so that he doesn’t say or do everything that comes to mind.”

“These are complex, high-level mental functions that include the abilities to discriminate, assess, plan, decide, anticipate, prioritize and compare. A leader with the capacity for critical thinking “seeks to obtain the most thorough and accurate understanding possible,” the manual says, and he anticipates “first, second and third consequences of multiple courses of action.” A leader deficient in judgment and strategic thinking demonstrates rigid and inflexible thinking.”

“Self-awareness requires the capacity to reflect and an interest in doing so. “Self-aware leaders know themselves, including their traits, feelings, and behaviors,” the manual says. “They employ self-understanding and recognize their effect on others.” When a leader lacks self-awareness, the manual notes, he “unfairly blames subordinates when failures are experienced” and “rejects or lacks interest in feedback.”

“Perhaps surprisingly, the field manual repeatedly stresses the importance of empathy as an essential attribute for Army leadership. A good leader “demonstrates an understanding of another person’s point of view” and “identifies with others’ feelings and emotions.” The manual’s description of inadequacy in this area: “Shows a lack of concern for others’ emotional distress” and “displays an inability to take another’s perspective.”

The Army field manual amounts to a guide for the 25th Amendment. There is, however, at least one historical precedent. The journalists Jane Mayer and Doyle McManus tell the dramatic story in their 1988 book, “Landslide: The Unmaking of the President 1984-1988.”

Before he started his job as President Reagan’s third chief of staff, in early 1987, Howard Baker asked an aide, James Cannon, to put together a report on the state of the White House. Cannon then interviewed White House staff, including top aides working for the outgoing chief of staff, Donald Regan. On March 1, the day before Baker took over, Cannon presented him with a memo expressing grave concern that Reagan might not be sufficiently competent to perform his duties. Reagan was inattentive and disinterested, the outgoing staff had said, staying home to watch movies and television instead of going to work. “Consider the possibility that section four of the 25th Amendment might be applied,” Cannon wrote.”

“After reading the memo, Baker arranged a group observation of Reagan for the following day. On March 2, Baker, Cannon and two others — Reagan’s chief counsel, Arthur B. Culvahouse Jr., and his communications director, Tom Griscom — scrutinized the president, first at a Cabinet meeting, then at a luncheon. They found nothing amiss. The president seemed to be his usual genial, engaged self. Baker decided, presumably with relief, that Reagan was not incapacitated or disabled and they could all go on with their business.”

“Much has changed since the Reagan era, of course. Because of Trump’s Twitter habits and other features of the contemporary media landscape, far more data about his behavior are available to everyone — to citizens, journalists and members of Congress. And we are all free to compare that observable behavior to the list of traits deemed critical for leadership by the U.S. Army.”