aside Sound The Alarm! The US Senate’s Trumpcare 3.0 Is Worse Than Prior Two Proposals

Dear Resistance Participants, It’s time to call your US senators again. I am referring to the republicans latest roll out of an updated healthcare plan on July 13, 2017 which is worse than the prior two bills that the tried to pass. I am calling this third attempt, Trumpcare 3.0 instead of (BCRA) Better Care Reconciliation Act.

The Senate leaders intend to get this bill passed passed with this third attempt to where any tactic, strong-arming, and bribes are acceptable tools to insure its passage.

The US Senate leadership, Senators Mitch McConnell and John Cornyn have rolled out their latest version of Trumpcare, claiming that they intend for republican legislators to honor their promise to the base, to repeal and replace Obamacare, even though it is also the Senate’s worst proposal out of 3.

The newest version of Trumpcare includes the amendment recommended by Senator Ted Cruz (R-TX) and supported by Senator Mike Lee (R-UT), where healthy young people can be separated out to where they can choose a stripped down unregulated health care policies, that is much less expensive.

As per a 7/13/17 Reuters report, “These  (Cruz) “skinny plans” would not have to cover the broad benefits mandated under Obamacare like maternity and newborn care, mental health services and addiction treatment, outpatient care, hospitalization, emergency room visits and prescription drugs.”

“Insurer groups, including the national Blue Cross Blue Shield Association, have derided the skinny plans, saying they would raise insurance premiums, destabilize the individual insurance market and undermine protections for pre-existing medical conditions. Moderate senators could balk at the provision for the same reasons.”

By the US Senate deciding to accept this Cruz amendment as part of Trumpcare 3..0,  BOTH SENATORS’ PREVIOUS SOLID NO VOTES get moved into the YES COLUMN. Now, as of 7/13/17, there are only two senators stating that they’re a NO vote which means this bill can pass. Thus, for the bill to fail, ONE more republican senator has to publicly admit to a NO vote. We need that one vote!

With two US senators out of the previous 4 NO votes, being moved from solid no’s to definite yes votes, Trumpcare 3.0 has a real chance for passage.

The reason why even health care insurance companies are strenuously objecting to this latest version, Trumpcare 3.0, is that the Cruz/ Lee amendment is counter to the most basic insurance principles, which include the law of “large numbers.” By cutting out the healthy young population with the Cruz/ Lee plan, the less healthy folks will end up paying for much more expensive regulated Obamacare policies with huge deductibles and copays, and thereby, guaranteeing its “death spiral” or failure. The Obamacare policies will become so expensive that peoples will not be able to afford them and then and then they’ll drop off the insurance rolls. The guarantee of coverage with pre-existing conditions will not be in jeopardy.

I would like to say that the republican US senators who concocted Trumpcare 3.0, simply do not understand how insurance works, but I’m thinking that the Cruz/ Lee addition is a crass calculated maneuver, intended to gussy up a very unpopular bill enough, to make it sound more palatable to the senators and their constituents, even if it is extremely flawed.

Now, I get real reason that the republican US Senate Majority Leader Mitch McConnell is forcing the senators to stay in town for the first two weeks of August. He doesn’t dare to let the senators to go home to face their voters.

The other strategy that the Senate leaders have resorted to, is to extend some Trumpcare 3.0 tax cuts by several months, to have ample funds to tempt/ bribe wavering senators with extra monies for their states like Senator Lisa Murkowski.

And Medicaid funds are still slashed but at a slower rate.

A recent Kaiser study proves that Obamacare is not failing. This Trumpcare 3.0 plan makes the existing Obamacare state of care, so much worse. The only reason that the bill isn’t being rushed through today (7/13/17), is because the Senate is required to have access to the CBO numbers before the bill can be passed..

Here’s the rest of the story,,,

The nation’s largest health insurance companies blasted a health reform proposal by Republican Sen. Ted Cruz of Texas to exempt health policies from consumer protections and allow for the sale of cheaper policies with skimpier benefits.

Insurers through their lobbies released a multi-pronged attack on an amendment by Cruz to Senate Majority Leader Mitch McConnell’s Better Care Reconciliation Act, which would roll back the Affordable Care Act’s Medicaid expansion and increase the number of uninsured Americans by 22 million. Cruz’s amendment to the BCRA, also known as Trumpcare, would strip protections from Americans who currently buy subsidized individual policies under the ACA in hopes of lowering prices. 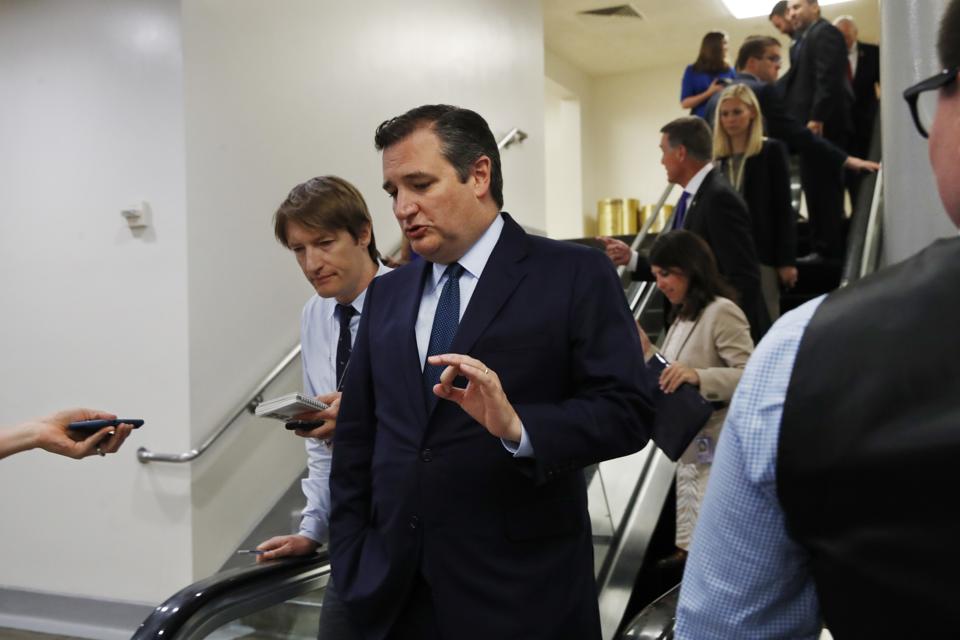 Sen. Ted Cruz, R-Texas, talks to is reporters about a proposal from Senate conservatives to let insurers sell skimpy policies provided they also offer a comprehensive alternative. It’s being billed as pro-consumer, but insurance companies don’t see it that way.  (AP Photo/Jacquelyn Martin)

“Cruz’s amendment, these insurers say, would allow health plans to “sell non-compliant plans if the health insurer offered at least one plan” on a state’s public exchange, or marketplace.

“The worry of insurers is that Cruz wants to create a separate system for only sick patients that would buy Obamacare policies in one risk pool with another pool that would offer cheaper plans only purchased by healthy Americans. That, insurers say, would be a disaster and destabilize insurance markets.”

“If plans entering the market are not subject to guaranteed issue requirements and could engage in denials for preexisting conditions, offer limited benefit designs and narrow networks, they would attract only healthy people from the existing market,” Serota wrote. “This would make coverage unaffordable for those that remain and who may need more robust coverage because of their preexisting medical conditions. The result would be higher premiums, increased federal tax credit costs for coverage available on exchanges, and insurers exiting the market or pricing coverage out of reach of consumers.”