I have always wondered why the Secretary of State Rex Tillerson accepted this position when offered by the White House. He has a history of being being critical of the US State Department when he was the CEO of ExxonMobile. He is NOT a champion for human rights issues. Ever since 2014, he has been complaining about US sanctions against Russia as a consequence of its unprovoked invasion and annexation of Crimea, Ukraine.

There is a 2011 lucrative deal that Mr. Tillerson, as Exxon’s CEO, negotiated between Exxon and Rosneft, a Russian oil company to explore for oil in Russia’s arctic area worth upwards of $500 billion dollars which has been put on hold after the US imposed sanctions on Russia in 2014.

I am willing to state with 99% certainty that the Secretary of State Rex Tillerson will have departed from his cabinet post at the latest, by September 30, 2017. While he has been in this role, he has been quietly doing his part to effect a lifting of the 2014 sanctions against Russia. With the imminent passage by the US Congress of a law barring the lifting of any sanctions against Russia without congressional review, he will have failed in his mission.

He had the potential of being an outstanding Secretary of State, where it not for his disdain for its mission. The sooner he leaves, the sooner those left can begin to salvage what’s left. This time, hopefully, the US Congress will be more diligent in confirming a replacement.

As per the 7/20/17 New York Times report, “Exxon Mobil Fined for Violating Sanctions on Russia” by Alan Rappaport, “The Treasury Department on Thursday (7/20/17) fined Exxon Mobil $2 million for violating sanctions that the United States imposed on Russia in 2014 while Rex W. Tillerson, now the secretary of state, was the oil company’s chief executive.”

“The penalty was relatively small for the Treasury and a blip on Exxon’s mammoth balance sheet, but it came as controversy over Russia policy has engulfed Washington. The Trump administration is facing questions about Russia’s intervention in the 2016 election, and Congress has considered stiffening sanctions out of concern that President Trump will try to ease those already in place.”

“American and European sanctions were imposed on Russia in March 2014 after Moscow annexed Crimea from Ukraine. Even as the crisis in Ukraine deepened, Exxon continued to press for deeper involvement in Russia’s oil industry.” 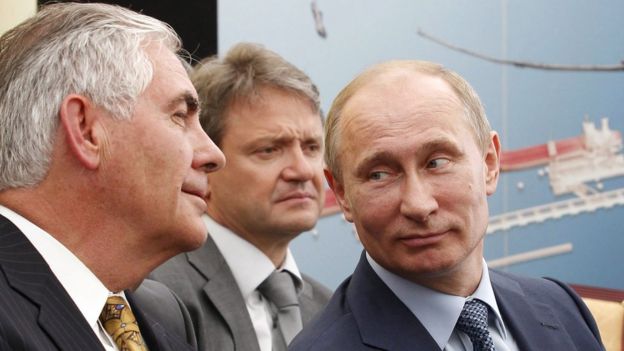 “Mr. Tillerson expressed opposition to the sanctions, before they were tightened in late 2014. At Exxon’s annual meeting in 2014, he said, “We do not support sanctions, generally, because we don’t find them to be effective unless they are very well implemented comprehensively, and that’s a very hard thing to do.”

“In a statement, Exxon called the penalty “fundamentally unfair.” The company also filed a lawsuit against the Treasury challenging the fine.”

“The company said it had adhered to guidance from the White House and the Treasury, and that its representatives had done nothing wrong by signing documents related to active business with Rosneft, which was not blocked by sanctions. Mr. Sechin was acting in an official capacity, Exxon said, not a personal one.”

“In its suit, Exxon argues that the Treasury penalty is out of sync with the guidance that the department and the White House provided when the sanctions were announced. The company also notes that BP’s American chief executive was allowed to participate in Rosneft board meetings with Mr. Sechin so long as the activity involved Rosneft business and not Mr. Sechin’s personal business.”

A Treasury official said the penalty came after a multiyear investigation.

“It was not the first time in recent months that Exxon has drawn attention for its handling of the Russia sanctions. In April, the company asked the Treasury for a waiver from sanctions against Russia so it could drill in the Black Sea in a venture with Rosneft, stirring speculation that Exxon hoped to influence the administration through its ties to Mr. Tillerson. That request was denied.”

“There were signs on Thursday (7/20/17) that the penalty could energize the push in Congress for tougher sanctions against Russia.”

“I am disappointed that an American company would so clearly act in divergence from U.S. national security interests,” said Senator Ben Cardin, a Maryland Democrat. “Today’s news only underscores the urgency for new sanctions on Russia that increase pressure on the country and tighten loopholes in existing sanctions.”