aside Why Has Tillerson Been A Total Flop As US Secretary Of State? There have been a lot of speculative reasons given as to why the republican President Donald Trump’s pick to be the US Secretary of State, Rex Tillerson has ended up being such a flop in the position. The below author Mr. Chollet ascribes what he thinks. I am in the camp that believes that what Mr. Tillerson is doing to diminish the importance of the US Department of State around the world, is intentional and is based on his very real antipathy towards it. He has been leading the state department away from its mission, the promotion of human rights and the benefits of democracy.

This could be as a result of his status as the former CEO OF ExxonMobil where his company and him, personally has been the target of  lawsuits, alleging human rights’ abuses/ violations which are still pending. See, complaint,

As per, In these Times article, “It is just one of countless lawsuits, investigations and allegations confronting the company and its former CEO involving human rights abuses; unsafe working conditions; investor and public fraud; destruction of the environment, climate and public health; support of dictators; contributions to global instability and inequality; and being party to wars and conflict—in addition to decades of verdicts against the company—all of which will follow Tillerson into and haunt the next administration,.” 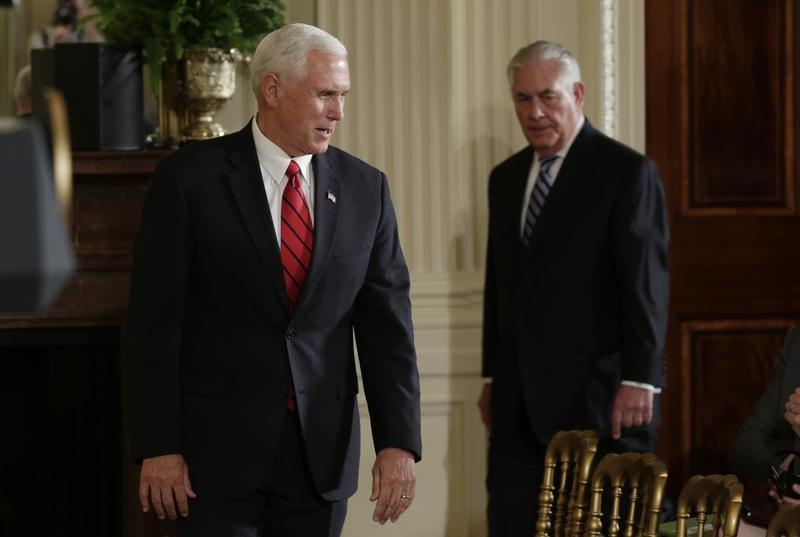 Then there is the state department having been a thorn on his side with the 2014 sanctions imposed against Russia because of its unprovoked invasion and annexation of Crimea in Ukraine. Mr. Tillerson had negotiated a 2011 deal between Exxon and a Russian oil company,  Rosneft for oil exploration in its Arctic region with a value upwards of $500 billion dollars, but this was put on hold due to the sanctions. Mr. Tillerson is the only one besides the president who has consistently argued against the imposition of sanctions against Russia.

And he is the only one who was present at the 2017 meeting between President Trump and the Russian President Vladimir Putin at the G20 summit, and who thereby, has first hand knowledge of what was discussed. I used to think that Mr. Tillerson would be resigning soon after the president had been barred by the US Congress from being able to lift any sanctions against Russia, but now, I am not so sure.

He must not care that US History books will give him the credit for dismantling the US Department of State which is the government’s arm designed to prevent war through diplomacy.

On August 4, 2017, Derek Chollet of FP penned the following article, “Why Has Rex Tillerson Belly-Flopped as Secretary of State?

I ask the question with regret. Before this year, Tillerson had a long and distinguished career as chief executive of one of the world’s most complex companies. At ExxonMobil, he led a global workforce of thousands, and was no stranger to tricky politics, earning praise for navigating his company’s position on climate change (after 2006) and helping to end the discriminatory, homophobic policies of the Boy Scouts of America.”

“Like Tillerson himself, I was surprised when President Donald Trump asked him to lead the State Department. He was not part of the Republican national security establishment or a major political figure. Nor, thankfully, was he a Trump zealot or Fox News regular like Rudy Giuliani or John Bolton. As I learned more about Tillerson’s private-sector record, I came to believe he had the tools for success at the State Department.”

Although new to public policy, Tillerson was no stranger to global politics, having rubbed shoulders and brokered deals with many world leaders. Such respected mandarins as James Baker, Robert Gates, and Condoleezza Rice vouched for him. So I was ready to do more than just give Tillerson a chance — I actually expected good things.”

“After six months on the job, the secretary of state entered August enduring one of Washington’s hallowed rituals, the career deathwatch, as leaks about his frustrations grew and rumors spread that he might walk. A few months ago it seemed reasonable to bet that he would not survive much past the 2018 midterms, and be replaced by Nikki Haley, the current U.S. ambassador to the U.N. Now it would be surprising if he even made it that far. Things are so bad that many guessed he was on the brink of resigning. The chatter has even produced a new word in the Washington vernacular: “Rexit.”

“Other secretaries of state have gotten off to rough starts — think Alexander Haig and Warren Christopher. But Tillerson’s beginning is by far the worst of the modern era. This week */1/17), he made his first visit to the State Department press-room, explaining how busy he’s been and giving shout-outs to a lot of officials he’s working closely with.”

“Tillerson is easily the most invisible top diplomat since Christian Herter. But as a devastating report by Foreign Policy and many smart observers have pointed out, the institutional damage is far greater and more lasting.”

“How could (he) have turned out to be such a disappointment? Consider four possible reasons.”

“First, there’s the excuse one hears most often from Tillerson’s defenders: This is a short-term hiccup and in fact he’s playing a long game. Tillerson’s slow start is therefore by design — he’s purposely taking it slow and steady, learning the issues, building his relationship with the president, solidifying his alliance with the “axis of adults,” and once he’s ready, things will turn around.”

“This spin worked for the first few months, but its shelf life has long expired. Tillerson’s most prominent validators have gone quiet — has anyone heard from Baker, Gates, or Rice lately? We used to read a lot about Tillerson and Trump dining together, and how Tillerson talked to Secretary of Defense James Mattis all the time. Now we hear more about Tillerson fighting with the White House over personnel, see him get out-hustled by the Pentagon, and witness the public spectacle of he and Trump differing on policy issues like the fight between Saudi Arabia and Qatar or the fate of the Iran nuclear deal. The president regularly brags about his generals, but never says very much about his Rex.”

“To be effective, the secretary of state must have a strong relationship with the president. So I don’t fault Tillerson for trying. And a lot of what he’s done to appease the White House (such as alienating the career Foreign Service officers, who have made their suspicions of Trump widely known) has only compounded the problems in his department.”

“Now the knives are out for him, as some of the chatter about Tillerson’s ineffectiveness are coming not just from the State Department, but sources in the White House. He has very few admirers in Congress. And as for the big boss, Tillerson has yet to be on the receiving end of a disapproving Trump tweet.”

“A second explanation is that since Tillerson genuinely believes the State Department needs to be better managed and reformed to be effective in the 21st century, he is taking the time to make that happen. That’s not entirely wrong. I don’t know anyone who believes the State Department is a bureaucratic Ferrari. Previous secretaries have undertaken reform efforts that reshaped the organizational chart. Christopher had a “strategic management initiative,” Madeline Albright pursued a “war for talent,” Colin Powell oversaw a massive information technology upgrade, Rice launched “transformational diplomacy,” and Hillary Clinton instituted a “quadrennial diplomacy and development review,” which John Kerry continued. So Tillerson’s “redesign” follows in these footsteps.”

“But there are some big differences. All of these prior efforts were undertaken in the service of making the State Department stronger — to enhance America’s diplomatic power with greater resources and people. They were about investing in the institution. Tillerson, on the other hand, seems perfectly content with diminishing the department’s role.”

“Tillerson has some highly capable people around him — friends and former colleagues I greatly respect. But when it comes to building a State Department for the next generation, I am hard pressed to name a single thing Tillerson has said or done to attract the best talent. If anything, he’s driving people away by decapitating the Foreign Service and ending valuable entry-level programs like the Presidential Management Fellowship. He appears fine with all the senior level vacancies. He has told senators privately that he thinks that the State Department is way too big and has too much money — as evidenced by his shocking decision not to spend nearly $80 million allocated to the department to fight terrorist propaganda and Russian disinformation.” 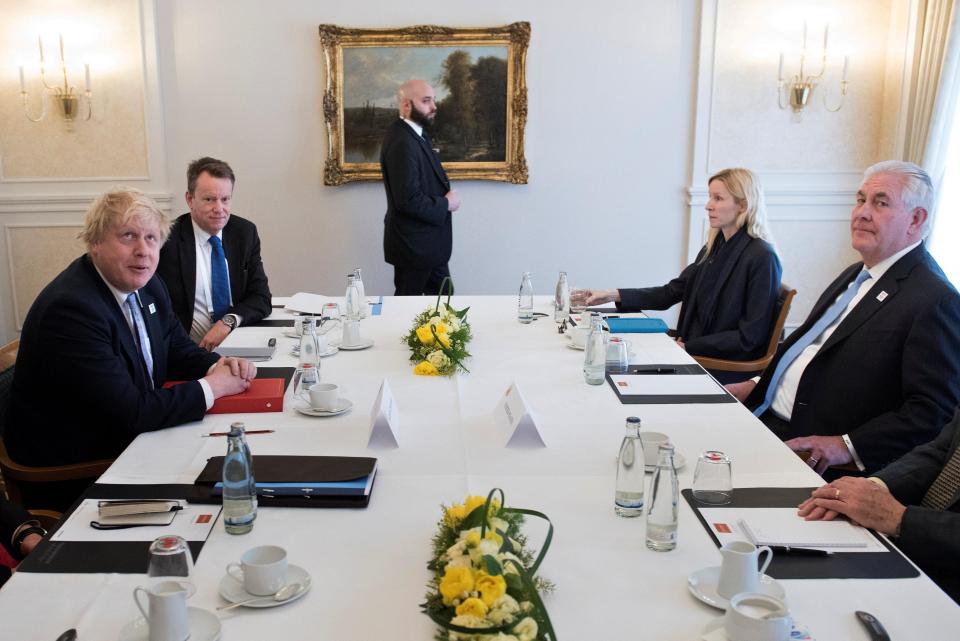 “So despite all the earnest management consultant talk, few are really convinced Tillerson’s reform initiative is about making diplomacy more effective or actually driven by the “bottom-up.” The people running it are viewed with derision and suspicion, like the “Bobs” in Office Space. Instead of making the State Department stronger, under Tillerson it is becoming more like the foreign ministries in China, Russia, and Saudi Arabia — a bureaucracy with clerks but few policymakers, while the true power in government rests elsewhere, around the strongman leader and in the military and intelligence services.”

“Which leads to a third reason Tillerson is off to the worst start ever: because, management issues aside, he has embraced a policy framework that relegates the State Department to second-tier status, and America itself to being a back-row kid. Tillerson is the first secretary of state to preside over an “America First” policy. I don’t know if he really believes in it, or just parrots these lines to stay in Trump’s good graces. But unlike Mattis, he goes out if his way to defend the concept. It is telling that when the world wants reassurance that the U.S. will maintain its leadership and stand by its commitments, it looks to the Defense Secretary, not America’s top diplomat.”

“A fourth explanation for Tillerson’s flop is the simplest and most innocent: He never wanted the job, doesn’t really like it, and is just trying to stay afloat and counting the hours until he can make a graceful exit. No secretary of state has taken the job with as little enthusiasm. Tillerson has been very open about his doubts over leaving ExxonMobil and missing his old life. He recognizes the fact that the job of secretary of state is very different from that of a corporate CEO.”

“Watching Tillerson’s first six months, one wonders whether Trump picked him as a way to diminish the State Department, similar to how Richard Nixon chose William Rogers for the express purpose of ensuring that the department remained weak. As Henry Kissinger recalled of Rogers, “few secretaries of state can have been selected because of their president’s confidence in their ignorance of foreign policy.”

“Trump is not that clever. Nor does he know history’s lessons well enough to follow them. But future secretaries of state and their staffs will study Tillerson’s opening months to learn what not to do — and have to spend a lot of time and valuable capital to fix what he’s breaking.”