A secretary of State is not just supposed to seal deals which reflects the mind set of the republican President Donald Trump and his Secretary of State Rex Tillerson, the former ExxonMobil’s CEO. Until Mr. Tillerson’s arrival on the scene, the US Department of State was also known for the advocacy for a whole host of issues that American democracy holds dear, like the promotion of democracy and the need for human rights’ improvements around the world.

Mr. Tillerson’s background as the CEO of Exxon translates to him starting up oil exploration sites where the world’s most prized oil resources lie largely beneath lands, or seas, controlled by some of the world’s most pernicious dictators. He earned his stripes at Exxon by dealing with utterly corrupt leaders whose respect for human rights, minorities, dissent, the press and the ballot box have been virtually non-existent. Today, Exxon has lawsuits filed against it, alleging human rights abuses, which were started while he was in charge and which are still pending. 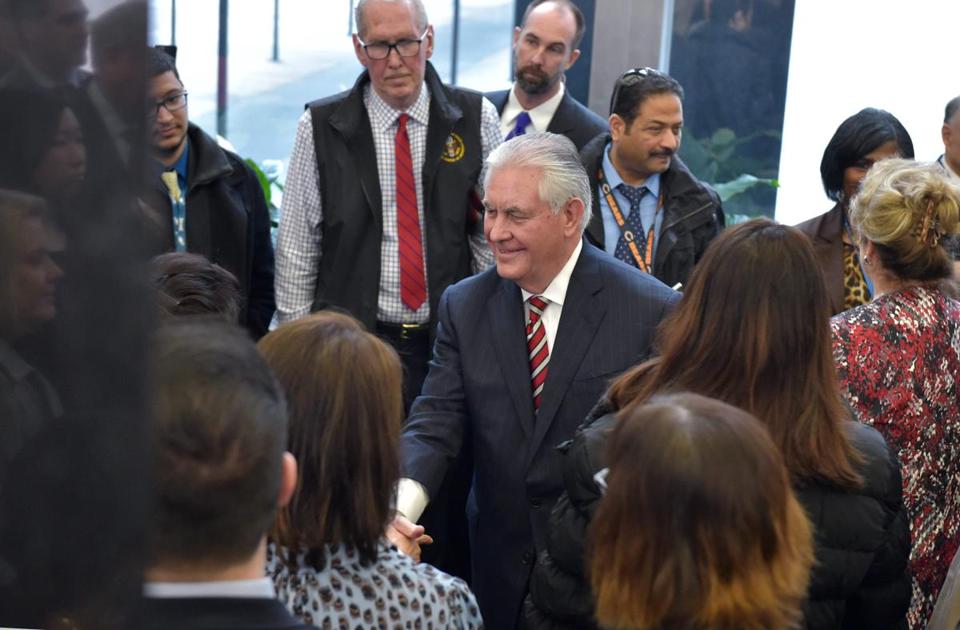 The USA has never had a secretary of State whose résumé hinged on his relationships with leaders around the world whose single-minded goal has been their own self-preservation or enrichment without regard for values Americans hold dear, like the promotion of human rights and the benefits of a more democratically run government.

And it frequently was the State Department which was a thorn in his side as when it impeded Mr. Tillerson’s company from being able to explore for oil in Russia’s arctic region based on the 2011 deal reached between Exxon and Russia’s oil company, Rosneft with a value worth upwards of $500 billion dollars. Exxon has been barred from benefiting from this contract because of the 2014 US and NATO’s sanctions imposed against Russia due to its unprovoked invasion and illegal annexation of Crimea in Ukraine.

In short, Mr. Tillerson entered into this role as the secretary of state with a mind set that the State Department should not be in the business of the promotion of countries becoming more democratically managed with human rights’ improvements. But this is counter to what the Department of State has stood for throughout the years and from its inception. 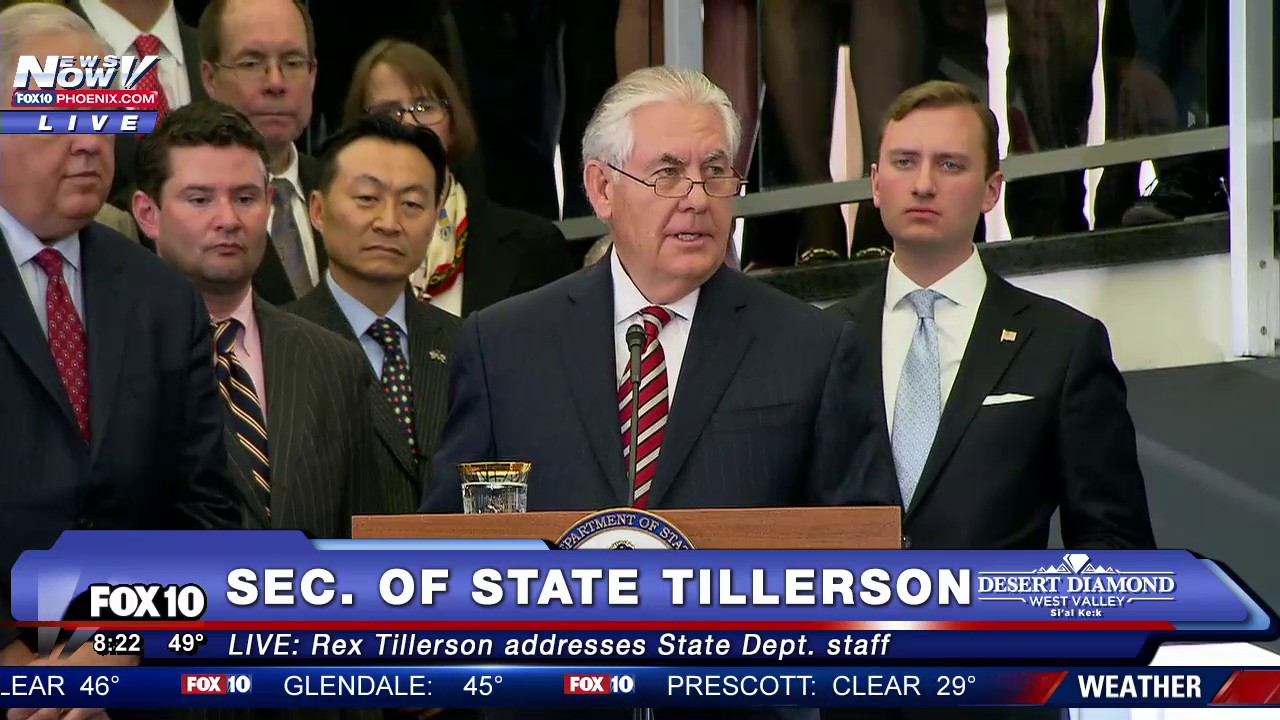 “Secretary of State Rex Tillerson has ordered his department to redefine its mission and issue a new statement of purpose to the world. The draft statements under review right now are similar to the old mission statement, except for one thing — any mention of promoting democracy is being eliminated.”

“According to an internal email that went out Friday, which I obtained, the State Department’s Executive Steering Committee convened a meeting of leaders to draft new statements on the department’s purpose, mission and ambition, as part of the overall reorganization of the State Department and USAID. (The draft statements were being circulated for comment Friday and could change before being finalized.)” “Compare that to the State Department Mission Statement that is currently on the books, as laid out in the department’s fiscal year 2016 financial report:”

“The Department’s mission is to shape and sustain a peaceful, prosperous, just, and democratic world and foster conditions for stability and progress for the benefit of the American people and people everywhere. This mission is shared with the USAID, ensuring we have a common path forward in partnership as we invest in the shared security and prosperity that will ultimately better prepare us for the challenges of tomorrow.”

“Former senior State Department officials from both parties told me that eliminating “just” and “democratic” from the State Department’s list of desired outcomes is neither accidental nor inconsequential.”

“The only significant difference is the deletion of justice and democracy,” said Elliott Abrams, who served as deputy national security adviser for global democracy strategy during the George W. Bush administration. “We used to want a just and democratic world, and now apparently we don’t.” “The mission statement is important because it sends a signal about American priorities and intentions to foreign governments and people around the world, said Abrams, who was considered by Tillerson for the job of deputy secretary of state but rejected by President Trump.”

“That change is a serious mistake that ought to be corrected,” he said. “If not, the message being sent will be a great comfort to every dictator in the world.”

“Tom Malinowski, who served as assistant secretary of state for democracy, human rights and labor for the Obama administration, said the new proposed mission statement brings U.S. foreign policy into closer alignment with that of some of America’s chief adversaries, including Russia.”

“It’s a worldview similar to that of Putin, who also thinks that great powers should focus exclusively on self protection and enrichment, rather than promoting democracy,” he said. “By removing all reference to universal values and the common good it removes any reason for people outside the United States to support our foreign-policy.”

“Malinowski also predicted that the change, if it becomes permanent, would sow confusion throughout the ranks of the State Department’s civil and foreign service because hundreds of State Department officials work on congressionally funded programs every day that are meant to promote democracy and justice abroad.”

“But in his inauguration speech, Trump made clear that democracy promotion would not be a feature of his foreign policy.

“We do not seek to impose our way of life on anyone, but rather to let it shine as an example for everyone to follow,” Trump said.”

The changes in the State Department mission statement may not seem very significant viewed in isolation. But Tillerson has made several statements and decisions that indicate he plans to lower the priority of democracy and human rights in U.S. foreign policy. 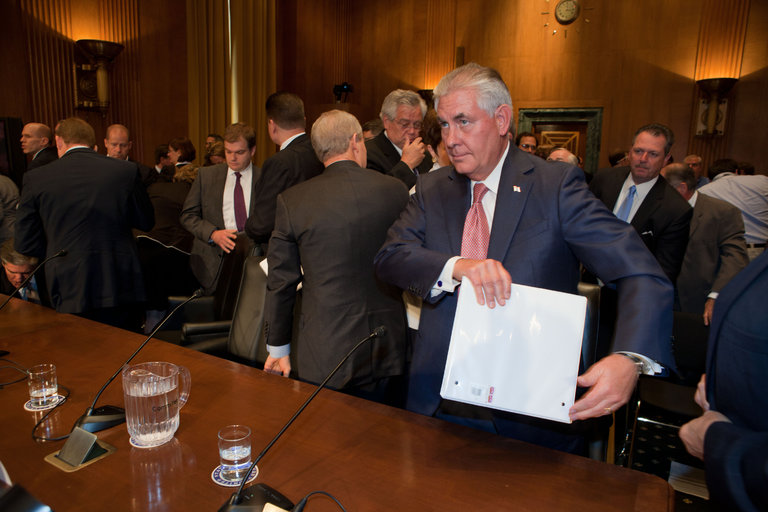 “In another example, the State Department will soon eliminate the www.humanrights.gov website and move its content to an alternative web address, www.state.gov/j/drl, a State Department official told me.”“It’s just so gratuitous. What efficiency is achieved or money is saved by taking something that is prominent on the Internet and hiding it?” said Malinowski. “The consequence is that it’s the 9,456th signal sent by the administration that they don’t care about promoting American values.”